Dr Tayyaba Zafar is an Astronomer and the first Pakistani woman to be selected for an Antarctic expedition under the Homeward Bound program. Homeward Bound is a groundbreaking global leadership initiative for women in STEM. The program is aimed at increasing women’s influence and prominence in the decisions that shape our planet for 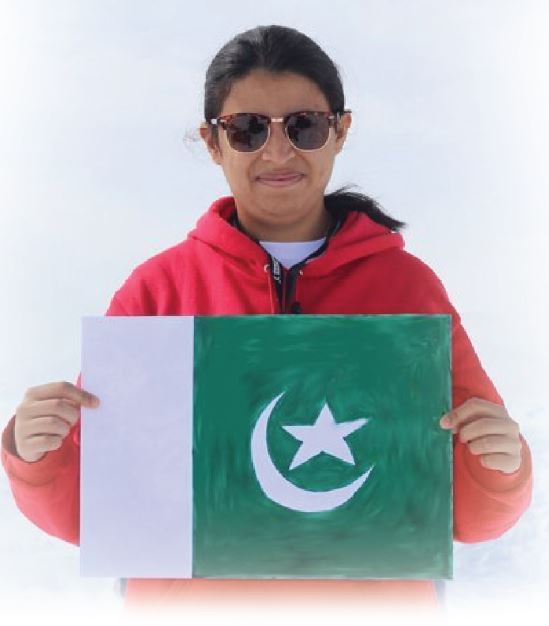 a sustainable future. The project works towards honing women’s leadership skills while at the same time making them more sensitive to climate change. This project is very diverse and aims to include women from different ethnicities and nationalities. According to this program, women are significantly underrepresented in leadership positions, globally. This project was started in December 2016, with of about 76 women selected from around the world to go to Antarctica. All of these had a background in science and completed a one-year state-of-the-art training program to develop leadership and strategic skills.
Dr Zafar received her early education in Lahore. She earned a Master's degree in Physics from Pakistan, after which she taught at the University of the Punjab for a year and a half. In 2007, she received a scholarship to get a PhD at the Dark Cosmology Center of the famous Niels Bohr Institute in Copenhagen, Denmark.
Dr Zafar was the only Pakistani of the 80 women selected to travel from 26 countries under the Homeward Bound program in 2018. A group of women, including experts from various fields of science, technology, engineering, mathematics, and medicine visited Antarctica and spent three weeks there. During her stay in Antarctica, she did research on various topics such as different types of penguins, melting glaciers, zodiac cruises and whale watching.
Talking about Homeward Bound program, she said: “The project was designed to go to Antarctica and if you know the geographical location of Australia, Antarctica is right under it. From Hobart you can land straight to Antarctica. But we went through Argentina to Antarctic Peninsula (in the west) which is more affected by climate change due to ocean heating. We visited various stations, which are hosted by different countries and there the researchers were telling how marine life is affected, how glaciers are melting, and how ecosystems are collapsing.”
The ice shelves in Antarctica are melting, having adverse effects especially upon marine life, e.g. seals, whales, etc. This project helped her understand about the climatic issues. Her opinion is that Pakistan should pay heed to environmental problems affecting it. “In Pakistan, we use a lot of plastic which emits carbon and is destroying our planet,” she commented in an interview to a local newspaper.
She emphasizes that girls should be encouraged to read the biographies and autobiographies of famous female scientists to help them become conscious that the field of science is not only limited to men. If some women can make their mark in science, then they can also do so. The 35-year-old shares that she has loved Astronomy since childhood. In school, Physics and Mathematics remained her favorite subjects. She said, “In Pakistan, the subject of Astronomy isn’t taught. Since I liked Astronomy, I used to buy books on the subject and read them for pleasure. Studying the subject, in depth, became a passion.”
She laments the fact that the subject of Astronomy is over looked in Pakistan. Despite being one of the most fascinating discourses in science, Astronomy has never been given due importance. Few institutions in the country focus on Astronomy research, let alone Astronomical observations.
In future, she wants to establish her own research group. Her advice for young girls is: “If you want to be a scientist, please stay in science. Our country needs equivalently bright girls like you. Every single person can dream but only a few work hard to pave their way to that dream. Never let go. Never give up when you are following your dream.”
Dr Tayyaba Zafar is currently a Senior Lecturer at Macquarie University in Australia. She is a shining example of how one can achieve their objectives through dedication and hard work. Pakistani girls should be encouraged by such examples to choose science and be aware of the fact that they can contribute tremendously in this field. HH