Pakistan has one of the largest irrigation systems in the world comprising three major reservoirs with a design capacity of about 20 billion cubic meters (BCM), 23 barrages, headworks siphons, 45 main irrigation canals commanding an area of about 17 million hectare (Mha). Agriculture is the backbone of the economy of a country where over 93% of the available water resources are used. However, this system is subject to a number of issues. One of the major issues is water scarcity. When we talk about water scarcity, certain questions come to our mind such as what is water scarcity? Is there real water scarcity in Pakistan? If yes, to what extent? What are the major reasons for water scarcity? What are the possible options to overcome this scarcity?

When an individual does not have access to safe and affordable water to satisfy her or his needs for drinking, washing or their livelihoods, we call that person water insecure. When a large number of people in an area are water insecure for a significant period of time, that area is water scarce. Water quality (both for drinking and agricultural purposes) also leads to water scarcity (Rijsberman, 2006). 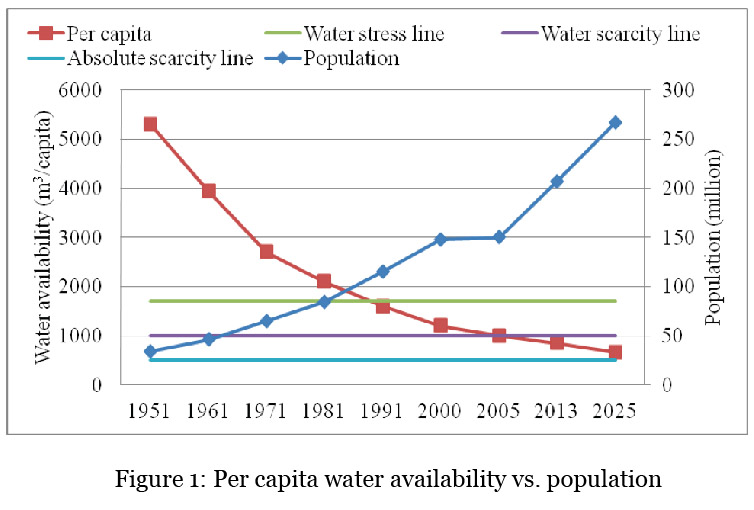 Figure 1 shows that with an increase in population, per capita water availability is decreasing. In 1950, per capita water availability in Pakistan was over 5000 m3. However, in 1990 Pakistan touched the water stress line and during 2005, it crossed water scarcity line. If the present situation continues, it will approach absolute water scarcity line by 2025.

The 2nd indicator is the Water Resources Vulnerability Index (WRVI) (Raskin et al., 1997). It compares national annual water availability with the total annual withdrawals (in percent). If annual withdrawals are between 20-40% of the annual water supply, the country is said to be water scarce. However, if it exceeds 40%, the country is said to be severely water scarce.

The 3rd indicator is IWMI’s Physical and Economic Water Scarcity Indicators (Seckler et al., 1998). According to these indicators, the countries that will not be able to meet the estimated water demands in 2025, even after accounting for the future adaptive capacity are called “physically water scarce”. The countries that have sufficient renewable resources but would have to make very significant investment in water infrastructure to make these resources available to the people are called “economically water scarce”. In Pakistan the water shortfall that was 11% in 2004 will increase to 31% by 2025 (GoP, 2001). Due to this shortage of water and increase in population, there will be a food shortfall of about 70 million tons by 2025 (ADB, 2002). As Pakistan has to make significant efforts and investment to meet the water shortage, therefore, it is both physically and economically a water scarce country.

According to the Water Poverty Index, if water is available but is of poor quality, the country is still a water scarce country. Pakistan Council of Research in Water Resources (PCRWR) implemented a series of national projects to monitor drinking water quality in Pakistan. According to a survey conducted during 2015-16, in 24 major cities, 69% samples were found unsafe for human consumption (Figure 2). 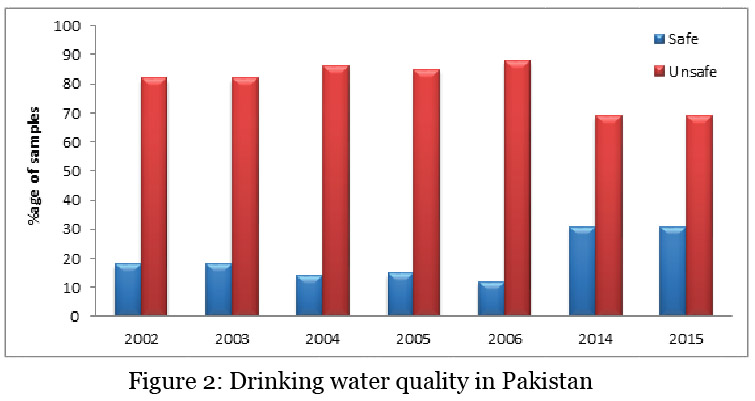 The major contaminants found were bacteria, arsenic, nitrate and fluoride. Another survey was conducted in the rural areas of Pakistan from 2004 to 2011. The situation was almost similar in the rural areas as out of the 14,000 samples collected, only 2,550 (18%) were found safe and 82% drinking water samples were found unsafe, according to the drinking water standards.

Over 10,000 existing water supply schemes were also surveyed from 2006 to 2012 from the four provinces, including Gilgit-Baltistan (GB) and Azad Jammu and Kashmir (AJK). About 72% water supply schemes were functional. Out of the 72% functional schemes, only 23% in urban and 14% in rural areas were providing safe drinking water (Ashraf, 2016). However, Pakistan Vision 2025 (GoP, 2013) set a target to ensure clean drinking water to all Pakistanis by 2025. During the past years, many efforts were made by the government for provision of safe drinking water to the masses. But the intended objectives could not be achieved. The major reason behind this was and continues to be the sustainability issue of the technologies implemented for water filtration and treatment. The countries which are providing safe drinking water to their masses have focused on the basic treatment and filtration systems. Moreover, the bulk water supply is being treated and has made tap water safe. In our country, though it will be quite expensive because water supply charges are not based on the consumption; the supply may be rationalized through introduction of water meters (Ashraf, 2016). Therefore, according to the four indicators discussed above, Pakistan is now a water scarce country.

The population in the country is increasing at an alarming rate and is expected to touch the figure of 250 million by the year 2025. This will not only have pressure on the already dwindling water resources but will also create many challenges for food security.

One of the major reasons of water scarcity is inadequate storage. Due to inadequate storage, Pakistan has lost more than 120 BCM of water during the floods of 2010, 2012 and 2014 besides having devastating effects on infrastructure, crops, livestock and people. The present water storage capacity of three major reservoirs is only 9% of the average annual inflow, against the world average of 40%. Due to sedimentation in the reservoirs, the capacity is being lost at a rate of 0.27 BCM per year. By 2010 the reservoirs had already lost about 8.1 BCM of their storage capacity.

Due to poor management of the irrigation system, the overall efficiency is less than 40% (Table 1). For example, out of 142 BCM of water available at the canal head works, hardly 55 BCM is being used by the crops (GoP, 2001). The remaining 87 BCM (61%) is lost during conveyance and during application in the fields. The water lost due to seepage in areas underlain by fresh groundwater is a temporary loss as it can be pumped back when required. However, it is an energy loss since energy is required to pump this water. In areas underlain by saline groundwater this is permanent loss as it cannot be used for irrigation/drinking and may lead to waterlogging and salinity (Ashraf et al., 2000). 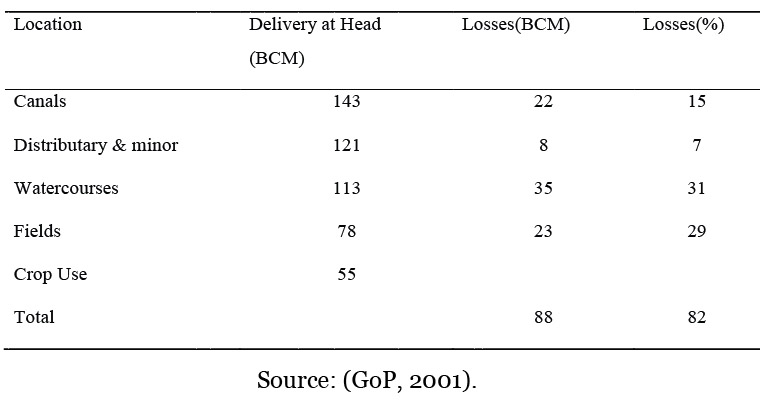 Groundwater is another major source of water that provides over 60% irrigation water supplies, over 93% drinking water and almost 100% industrial water. As there is no groundwater regulatory framework in Pakistan, anyone can install any number of tubewells anywhere at any depth and can pump any amount of water at any time (Ashraf et al., 2012). Due to indiscriminate pumping the groundwater is depleting at an alarming rate. It has been reported that out of 43 canal commands, the water table was declining in 26 canal commands due to rapid increase in groundwater abstraction (Bhutta et al., 2000). In Balochistan, the situation is even worse and in some river basins, the water table is declining at a rate of more than 3 m per year. This is mainly due to hyper arid climate and prevailing flat rate of electricity in the province (Ashraf, 2016).

A water shortfall of over 30% in 2025 means there is a further storage requirement of the order of 27 BCM (3-4 large dams). Therefore, there is dire need to develop new storage reservoirs through construction of large and small dams. Water and Power Development Authority (WAPDA) has identified a potential of over 59 BCM of water that can be stored on Indus and its tributaries. However, during the last four decades, no major reservoir has been built in the country. Due to inter-provincial conflicts, the focus of the governments has been on the construction of small dams. Small dams should be constructed wherever possible however, these cannot be an alternative of large dams.

The large dams nevertheless, store a huge amount of water that can be used for irrigation, hydropower generation (the cheapest source of energy), and, to meet the environmental flow requirements of the river. These dams control floods, provide water throughout the year, and act as buffer during dry season and dry years. The large dams however, require huge investment, appropriate sites, considerable time for feasibility study, completion of the project, face resettlement and environmental issues, and, more importantly, require national consensus (Ashraf, 2016).

During the last forty years, no additional water has been injected into the system. The Mangla Raising Project (3.9 BCM) has only compensated storage capacity lost due to sedimentation since the commissioning of these reservoirs. Pakistan Vision 2025 sets a target of improving the efficiency in existing water usage in agriculture by 20%. This can be achieved by:

• Improving the conveyance and application efficiencies through canals and watercourse improvements.

•  Adopting proper irrigation scheduling (when to apply water and how much to apply to a crop?).

•    The practices of keeping water standing in the rice fields needs to be stopped since now it has been   established that rice does not need standing water. Rather it can be grown on bed and furrows and even with sprinklers (Soomro et al., 2015).

Formulation of a Groundwater Regulation Authority

A regulatory framework should be devised and strictly implemented for the installation and operation of tubewells to reduce and control the over extraction of groundwater. Subsidies given on groundwater withdrawals particularly the flat rates on electricity should be withdrawn.

High intensity rainfalls, steep slopes, and erodible soils without adequate protection have led to extensive soil erosion in the area and the consequences are devastating. The Indus River in Pakistan brings an annual sediment load of 435 million tonnes and an average sediment concentration of 2.49 kg/m3. According to an estimate, the Indus River is adding 500,000 tonnes of sediment to the Tarbela reservoir every day, reducing the capacity of the reservoirs (Iqbal et al., 2012). Therefore, water should be considered as a resource and its management should start from watersheds. A comprehensive watershed management program should be developed and implemented.

There is potential of over 13 BCM of drainage effluents. Similarly, the wastewater generated from sixteen major cities exceeds 5 BCM. The wastewater is either being thrown into the water bodies without any treatment, threatening the ecosystems. On one hand drainage water and wastewater are a nuisance and on the other hand, these are resources that can be used to narrow the gap between water demand and supply. It is also being used for irrigation in the peri-urban areas posing serious health and environmental impacts. Technologies and practices have been developed for the use of drainage water and treatment of wastewater. These techniques should be economized and replicated for the reuse of drainage and wastewater.

Most of the problems associated with the water sector have risen from illiteracy and lack of knowledge and understanding of water conservation practices and high efficiency irrigation systems. An extensive social awareness campaign is required using mass media and a village-to-village campaign of extension services. Moreover, effective extension service mechanism must be developed to transfer new and efficient irrigation methods, technologies, and practices to farmers.

Pakistan is fast becoming a water scarce country due to number of issues such as increase in population, urbanization and industrialization, inadequate water storage facilities, sedimentation in the existing reservoirs and inefficient use of the available water. However, most of these are management issues and the present situation can be averted by adopting both hard path (control of population, construction of new reservoirs, development of groundwater regulatory framework) and soft path (improving the land and water productivities). This requires a paradigm shift and commitment from all the stakeholders right from policymaker to water users (farmers, general masses).

The writer is a professional engineer and holds a Ph.D from the University of Newcastle, UK. He has more than 25 years’ experience in the water sector. He has more than 80 research publications to his credit. Presently he is working as Chairman of Pakistan Council of Research in Water Resources (PCRWR).