Water is one of the most important natural resources that is essential for the survival of life on earth. During the colonial period in India, the British developed one of the largest contiguous irrigation systems in the world in the north eastern part of the subcontinent consisting of six river basins via Indus, Jhelum, Chenab, Ravi, Sutlej and Beas. On the one hand, this system boosted the local economy tremendously, whereas on the other hand, it created conflicts among the various states and the upstream-downstream riparian water users during the pre-independence British era. These conflicts intensified after partition in 1947 between the newly created states of India and Pakistan. The conflict was resolved in 1960 through the good efforts of the World Bank with the water distribution treaty i.e., Indus Waters Treaty (IWT) brokered by it. 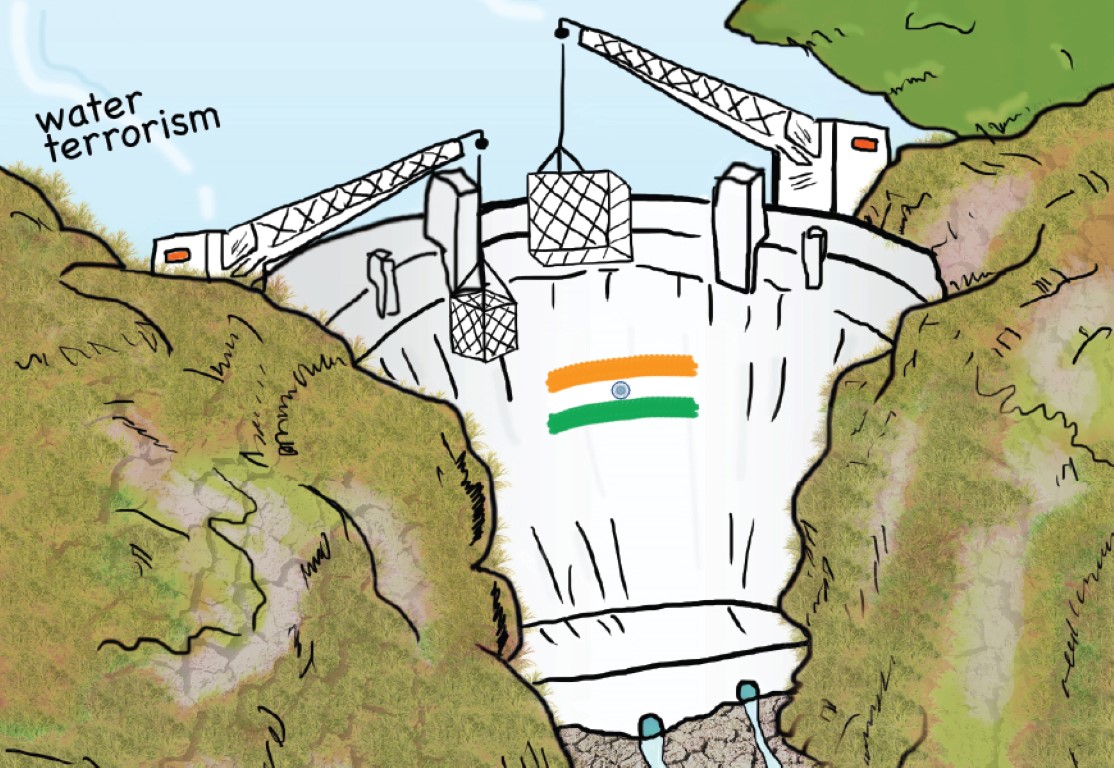 In the backdrop of peculiar setting of water resources and use pattern in the two countries, the IWT may be considered as the first of its kind in the world where instead of dividing water between the two parties, exclusive rights to use water in the three Eastern Rivers i.e., Ravi, Sutlej and Beas were given to India, whereas Pakistan was authorized unrestricted use of water from Western Rivers i.e., Indus, Jhelum and Chenab with some restricted and well-defined uses by India. 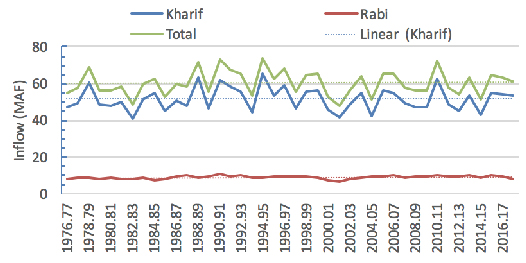 Due to the Treaty, Pakistan had to transfer water from Western Rivers to the Eastern Rivers with development of huge infrastructure consisting of storage reservoirs, link canals, irrigation systems, water diversion and conveyance canals. This has led to a number of consequences affecting the local ecosystems.

However, instead of implementing the Treaty in its true letter and spirit, India being upper riparian has always used it as a strategic weapon against Pakistan. Indian politicians have also used it as an election campaign agenda. They are used to sloganeering etc., voicing that after getting power they will take away Pakistan’s Treaty-ensured right to use waters of Western Rivers. Prime Minister Modi’s 2019 election campaign is a recent example where he has threatened to divert water away from Pakistan.
Pakistan’s Case
Pakistan has one of the largest irrigation systems in the world fed by Western and Eastern Rivers. About 74% of its water flows from catchments outside its boundaries.1 After IWT, India gradually stopped almost all waters of the Eastern Rivers (Figures 1 and 2). The water now flowing in these rivers originates from rainfalls within Pakistan’s boundaries plus some wastewater that joins these rivers. In exceptional cases, flood water is also released by India as they have no use for it, further compounding the problems for Pakistan.
In case of Western Rivers, average inflow in the River Indus at Tarbela and River Kabul (a tributary of the River Indus) in Nowshera are almost the same (Figures 3 and 4). However, in the River Jhelum at Mangla and the River Chenab at Marala (Figures 5 and 6), a continuous declining trend in river average inflows is observed due to upstream water development by India. This should be a matter of concern for Pakistan.
Moreover, drains discharging into Pakistan’s territory – particularly Hudiara drain originating from India – carry all kinds of pollutants including Persistent Organic Pollutants (POPs) which ultimately discharge into the already almost dry River Ravi. This has a serious impact on the ecosystem.3 There are also indications that due to heavy groundwater abstractions in Indian Punjab supported by electricity subsidies, groundwater table is declining at a fast rate. This may also have serious impacts on the groundwater aquifers along the eastern borders of Pakistan. All these issues need to be properly investigated with science-based evidence before taking them up at the appropriate forums. Moreover, accurate and real-time measurement of transboundary water once it enters Pakistan as well as at all the strategic locations is also very important.
River Kabul contributes a significant quantity of water (about 20 MAF annually) into the Indus. Pakistan is both upper and lower riparian in this river. However, it has almost been ignored and there is no dedicated institution dealing with River Kabul and its watershed. There is no proper flow measurement system except at Nowshera which is more than 60 kms away from Pakistan-Afghanistan border.

Figure 3: Inflow in the River Indus at Tarbela

Figure 4: Inflow in the River Kabul at Nowshera

Figure 5: Inflow in the River Jhelum at Mangla

Figure 6: Inflow in the River Chenab at Marala2

A number of studies are being conducted by various international organizations sponsored by U.S. and other donor agencies on the River Kabul basin. Pakistan should not leave the gap and must start comprehensive studies on the River Kabul and its watersheds. Moreover, there is a need to start dialogue with Afghanistan and establish a joint Kabul River Commission or Authority for watershed management and benefit sharing between the two countries.
Pakistan’s national security is linked with its food security which is directly linked with water security.4 Any decline in water quantity and quality will have a serious effect on the food security. Therefore, Pakistan needs to develop a two-pronged strategy: (i) dealing with the transboundary water particularly with India, and (ii) managing the water within its boundaries.
Dealing with Transboundary Waters
Dealing with transboundary water, particularly for the lower riparian, is always complex and challenging and requires strong institutions than those dealing with inland water. Presently, Pakistan Commissioner for Indus Waters (PCIW) is the only institution that is looking after matters related to the IWT. However, it does not have appropriate professional staff to deal with their counterpart proactively. Most of the time, its approach is reactive based on the news in national and international media. It does not have its regular Commissioner at the top-most level for more than the last two years.
Pakistan should have a very strong and vibrant institution well equipped with high level professionals in the fields of dam/reservoir engineering, hydropower, hydrology, transboundary water diplomacy, international water laws, information technology etc. simply because lower riparian can only survive if they are alert, professionally sound, aware of the developments on the upstream side and can respond quickly to any intervention taking place at the upstream whether relating to the infrastructural development, climate change, or floods etc. Space technologies have made it possible to look beyond physical borders. Pakistan Council of Research in Water Resources (PCRWR) has developed modest expertise in the application of satellite technologies such as real-time groundwater monitoring using GRACE (Gravity Recovery and Climate Experiment); Altimeter for reservoir monitoring including transboundary surface water; and real-time discharge measurement using GSM-based technology, etc. The Council has all kinds of infrastructure and equipment to provide backstopping on emerging issues. However, its performance is also hampered by sustainability and human resource issues.

The creation of an innovative water institution such as Pakistan National Commission of Water (PNCW) equipped with human capital, multiple water disciplines and full autonomy can contribute towards effective and efficient water resource management. The proposed PNCW may investigate efficiency, equity, and sustainability issues under the allocation rule by taking holistic approach within and outside the country and can provide backstopping to strategic institutions like PCIW, IRSA etc.
Dealing with Inland Waters
Though Pakistan has one of the largest irrigation systems in the world yet it is one of the most inefficient irrigation systems with the overall efficiency of less than 40%. This means more than 60% of the water is lost during conveyance and application in the field. Moreover, increase in population, urbanization, industrialization and agricultural activities has increased the gap between water supply and demand – the gap that was 11% in 2004 will increase to 31% by 2025.5 The shortfall of more than 30% means water to the tune of 18-20 MAF. The question thus is: How can this shortfall be fulfilled?

The National Water Policy (NWP) approved in 2018 provides guiding principles to address those issues. Two of the milestones given in the NWP are:
(i) In order to augment the dwindling irrigation deliveries into the existing canal systems on account of ever-decreasing existing storage capacity of Mangla and Tarbela due to sedimentation and to develop new cultivated area on canal irrigated water, the existing water storage capacity of 14 MAF shall be increased by immediately starting construction of  Diamer-Bhasha Dam Project having 6.4 MAF live storage on which consensus of all the federating units has already been achieved in 2009 at the Council of Common Interests (CCI) level. The existing water storage capacity will be increased up to 10 MAF including Diamer-Bhasha Dam.

Pakistan’s national security is linked with its food security which is directly linked with water security. Any decline in water quantity and quality will have a serious effect on the food security. Therefore, Pakistan needs to develop a two-pronged strategy: (i) dealing with the transboundary water particularly with India and (ii) managing the water within its boundaries.

(ii) Increase of at least 30 percent in the efficiency of water use by producing “more crop per drop”. This will require use of new technologies like drip and sprinkler irrigation and more realistic water pricing policy. The present average rate of water charges per acre is only one fourth of what the farmer pays for tube well water in the groundwater market.
However, the major challenge will be implementation of the NWP in true letter and spirit. With conventional departments, leaderships and approaches, the milestones given in the NWP cannot be achieved. This requires a paradigm shift, major structural changes, strong political will and commitment. Moreover, all the departments working in isolation would have to be placed under one umbrella – may be under the PNWC – to solve the complex issues of transboundary and inland waters to ensure water and food security in the country.
Finally, the leaders of both the countries should work together to resolve transboundary water issues for the welfare of their people and to maintain the ecosystem so that the future generation may live in a better environment than we are living in right now.
Conclusion
The IWT has and would have serious implications on the food and water security of Pakistan if the issues surrounding it are not resolved now. Therefore, the country needs to tackle the issues with respect to both transboundary as well as the inland waters more proactively. The complex nature of the water issues demand for a major restructuring of the existing institutions as conventional departments and their approaches can no longer be an option worth consideration.

The writer is a professional engineer and holds a Ph.D. from the University of Newcastle, UK. He has more than 25 years’ experience in the water sector. He has more than 80 research publications to his credit. He is Former Chairman, Pakistan Council of Research in Water Resources.
E-mail: [email protected]