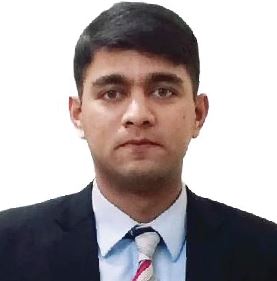 Indian hegemonic designs became evident just weeks after independence when Junagadh, a crown jewel of Indian sub-continent, was occupied by the Indian forces. It is thus imperative to highlight the issue of Junagadh at all international forums. 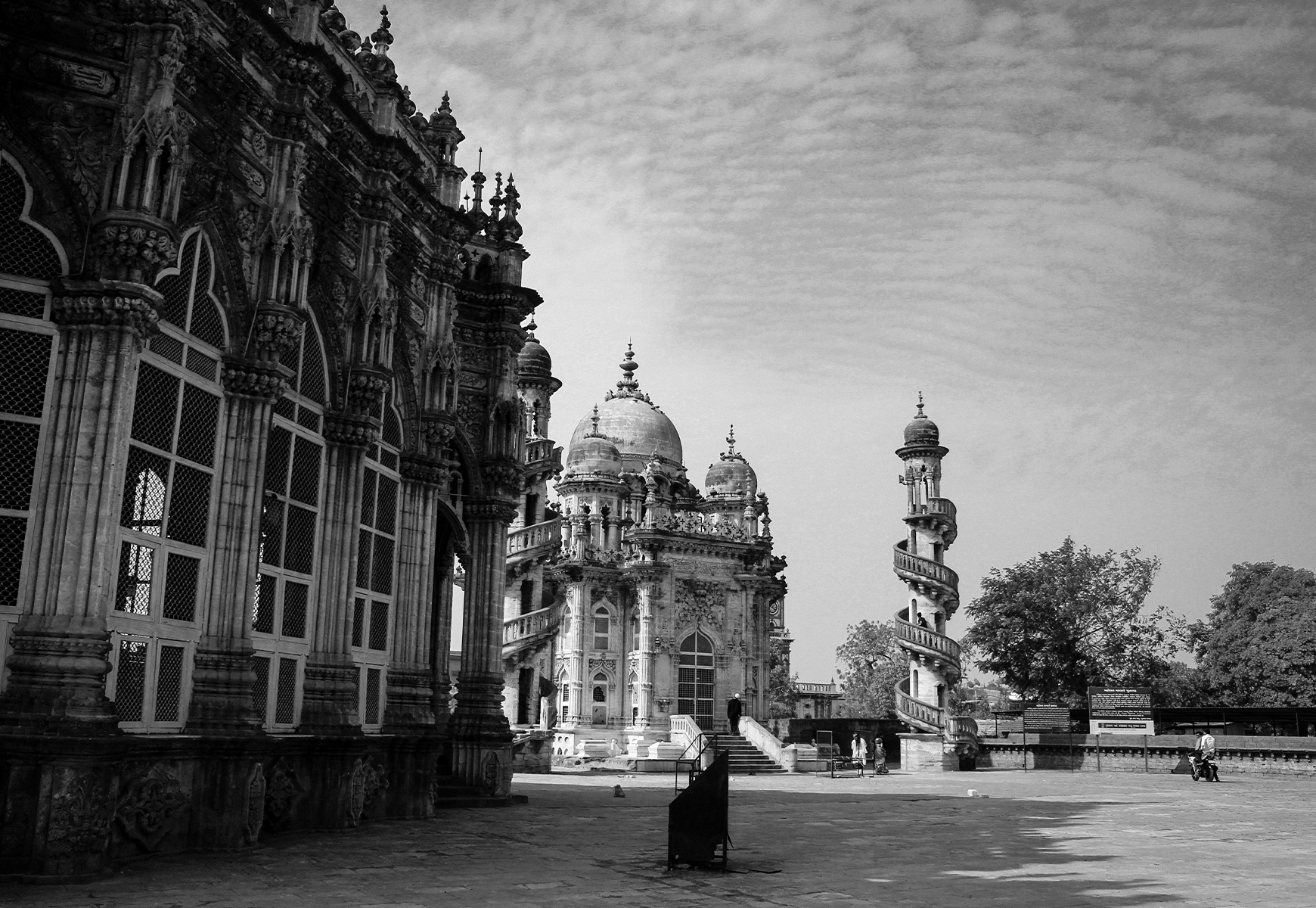 With a landmass more than twice the size of Karachi, in the strategic Saurashtran Kathiawar peninsula, between the Gulf of Kutch and Khambhat, at a distance of mere 400 kilometers from the city of Karachi, lies the fertile and culturally rich state of Junagadh. Due to famous chronicles of its preeminence from the times of Ashoka and Mauryan empires, Junagadh had always been the crown jewel of the kings and conquerors heading towards this part of the sub-continent. This land of Asiatic lions has seen periodic changes in its reign during the last two millenniums, owing to its geostrategic value and the economic activity it generates. Port Junagadh and Porbandar being the economic centers since centuries, have also served as a gateway to western India for most of the Portuguese colonial expeditions during the 17th century.
However, the state of Junagadh was in fact never a separate entity until 1654, but under a dominion of various rulers and emperors, ruling it through governors and royal appointees. Signs of its integration were first seen under the Babi dynasty of Afghan-Pashtun origin who came to India with Shah Jehan from Khorasan and were providential enough to defeat the Marathas before formally establishing the state of Junagadh in the heart of Kathiawar in 1730. Though the real independence was short-lived and was soon taken over when it came under British suzerainty in 1807, but since then, Junagadh state retained its identity as a princely state under the British crown until the partition of India. It was ruled by Muslim princes known by the title of ‘Khanji’ and authorized a 13-gun salute, a scale signifying importance, size and population of a royal state under the British.
The problem with this princely state, similar to Hyderabad and Kashmir, occurred during partition, when the rulers were given a choice to either select India or Pakistan for a merger. The British being seasoned administrators and bureaucrats, with patented mastery over swaying half of the world, left a loophole in the guidelines issued for the accession of princely states. Although princes were given the right to choose, they were expected to take into consideration the geography as well as the wishes of their subjects. A vague, subjective decree issued by the Viceroy’s office sowed the seed for future conflicts between the two nascent states. Junagadh, unlike Hyderabad, was located on the periphery of western India with a long coastline, making it comparatively easier to merge with Pakistan. Bordered by the Arabian Sea on three sides and India to its north, accession to Pakistan was not a difficult proposition to make, but the British and deceitful Indians had other plans of subversion.

The British being seasoned administrators and bureaucrats, with patented mastery over swaying half of the world, left a loophole in the guidelines issued for the accession of princely states.

Junagadh, being a welfare state and fifth largest in terms of revenue collection pre-1947, had too many vultures waiting for its debacle as the eve of independence approached. An opportunity was being sought, that unfortunately was accorded, when Nawab of Junagadh, Mahabat Khanji-III, signed the instrument of accession in Pakistan’s favor on September 15, 1947 and left for Karachi to meet Quaid-i-Azam. Pakistan’s Constituent Assembly accepted the accession a day later. In the meanwhile, Delhi could not accept the fact of having a Muslim state jutting inside its territory, especially, a state as prosperous and significant as Junagadh. All this led to the annexation of Junagadh by Indian forces on November 9, 1947, barely two months after its merger with Pakistan, making it the first Pakistani territory to be usurped as a manifestation of Indian hegemonic designs. 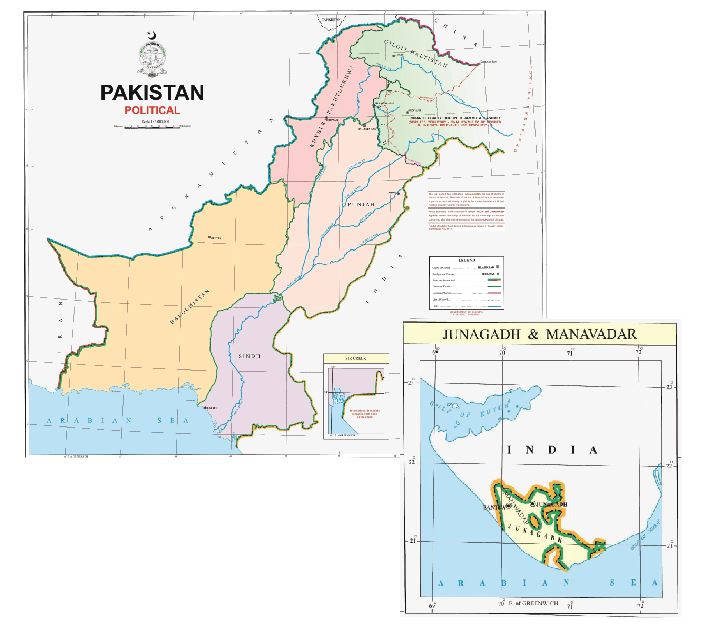 With Pakistan already stretched to the limit in dealing with refugee crisis, Kashmir issue and the delay in transfer of assets as per the agreed share, it could not afford a military conflict in Junagadh.
Pakistan having the legal right to claim the state of Junagadh approached the United Nations (UN) on January 6, 1948 in its 226th session, under the title, ‘Jammu and Kashmir Question’. The issue of Junagadh alongside Kashmir was discussed in numerous sessions from January 6, 1948 till December 31, 1951, but all in vain. The UN Security Council (UNSC) resolution number 39 concerning Kashmir and Junagadh remains in a state of limbo till date. The state of Junagadh still poses a question mark for the world and supranational bodies including UN, European Union (EU), Organization of Islamic Cooperation (OIC), Arab Union and others about the right to self-determination and freedom, that is a major point of concern for all, especially the developed nations. How can India consider Kashmir a part of itself, when only the ruler of that time decided to accede with India whilst the population wanted otherwise? And how can India amalgamate the state of Junagadh, when the Nawab wanted to join Pakistan and the people wanted to side with their Nawab? The populace was in agreement with the decision of their Nawab, not because of the religious aspect, but due to the effective administration of Junagadh – a state with its own railways, free education, free health facilities and immense prospects for business and employment.
In the strategic context, apart from adding more than 300 kilometers of coastline in tandem with the Exclusive Economic Zone (EEZ), Junagadh would have provided Pakistan with two well established and functioning ports along with a thriving fishing industry, which would contribute to the national exchequer. Moreover, the issue at Sir Creek and Rann of Kutch would subside as India would have found its forces being enveloped by Pakistan from both sides – Junagadh peninsula and Sindh. Apart from providing depth to Karachi and southern Sindh, Junagadh’s strategic location would have provided Pakistan an ideal jump-off point to balance any Indian aggression in the north. In case of imminent hostilities, complete Indian western coastline and naval activities would have been under vigilance and any nefarious design could be dealt with sufficient warning time at hand.
Although the Government of Pakistan did make diplomatic efforts for the liberation of Junagadh initially, soon after the fall of Dhaka and the pandemonium that followed, coupled with political precariousness in the country, Junagadh was lost in the labyrinth of time. Pakistan’s map and postages depicting Junagadh and its vassal states of Manavadar in 1960s soon evanesced from the nation’s collective memory, until recently when Pakistan issued its new political map. The case of lost kingdom also came back to life when the present Nawab of Junagadh, Muhammad Jahangir Khanji, reiterated his resolve to fight for Junagadh by highlighting the issue of its liberation from Indian occupation at all international forums. At this importunate time, when India under the facist ideology of Hindutva is at the verge of implosion, Pakistan must make efforts to highlight the issue of Junagadh through diplomatic means. With Ladakh standoff, Nepal-India dispute, Kashmir struggle, North-eastern resistance, Khalistan Movement, Maoist and Naxalites, Indian Union is caught in its own cobweb.
An urgent requirement in this case is granting the special status of a federal territory to Junagadh along with its representation in the Senate. Observance of Junagadh Day on November 9, especially by all Pakistani embassies and diplomatic missions around the world, is another way to create awareness about this issue. Ergo, Pakistan must refile the case of Junagadh in UNSC, thereby letting the world know that not only Kashmir, but other territorial disputes of Junagadh, Siachen and Sir Creek between Pakistan and India require contemplation.