Pakistan Navy Takes Over the Command of Combined Task Force-151

Pakistan Navy (PN) has taken over the command of Multinational Combined Task Force 151 (CTF-151) from Royal Jordanian Navy at the Change of Command ceremony held at Headquarter U.S. NAVCENT, Bahrain. This was the 10th time Pakistan was given the command of CTF-151. Commodore Ahmed Hussain of Pakistan Navy took over the Command from Colonel Mohammad Ismail Al-Tarawneh of Royal Jordanian Navy. 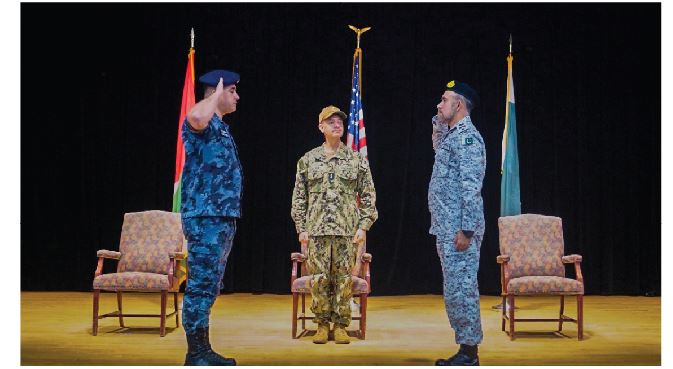 Speaking on the occasion, PN Commander Combined Task Force-151 (CCTF-151), Commodore Ahmed Hussain assured that his team is fully prepared to efficiently shoulder this challenging responsibility. He reaffirmed his resolve to continue operations with zeal and zest.
The mission of CTF-151 is to deter, disrupt, suppress piracy and armed robbery at sea. The Task Force engages with regional and other partners to strengthen relevant capabilities in order to protect global maritime commerce.
Earlier this year, Pakistan Navy took over the Command of CTF-150 for the 12th time. Pakistan Navy is the first one amongst CMF partner nations to command the two Task Forces concurrently. The historic achievement speaks not only of PN’s dedication and commitment to maritime peace and stability in the region, but also of the trust reposed by the world navies.
The change of command ceremony was attended by military and civilian dignitaries, ambassadors of Pakistan and Kingdom of Jordan and senior officers from other navies forming the maritime coalition.