Pakistan is at a stage where it doesn’t only have numerous resources at hand but ample opportunities to gain benefit from.

Economists now have a near consensus that a firm line cannot be drawn that separates their discipline on the one hand and history, political science and sociology on the other. One of the more widely read books of recent years is Why Nations Fail, coauthored by Daron Acemoglu and James A. Robinson. The former teaches Economics at MIT, the latter Political Science at Harvard University. In this article, I will also employ a multi-disciplinary approach to analyse the country’s current situation and suggesting why we could be positive about what lies ahead. 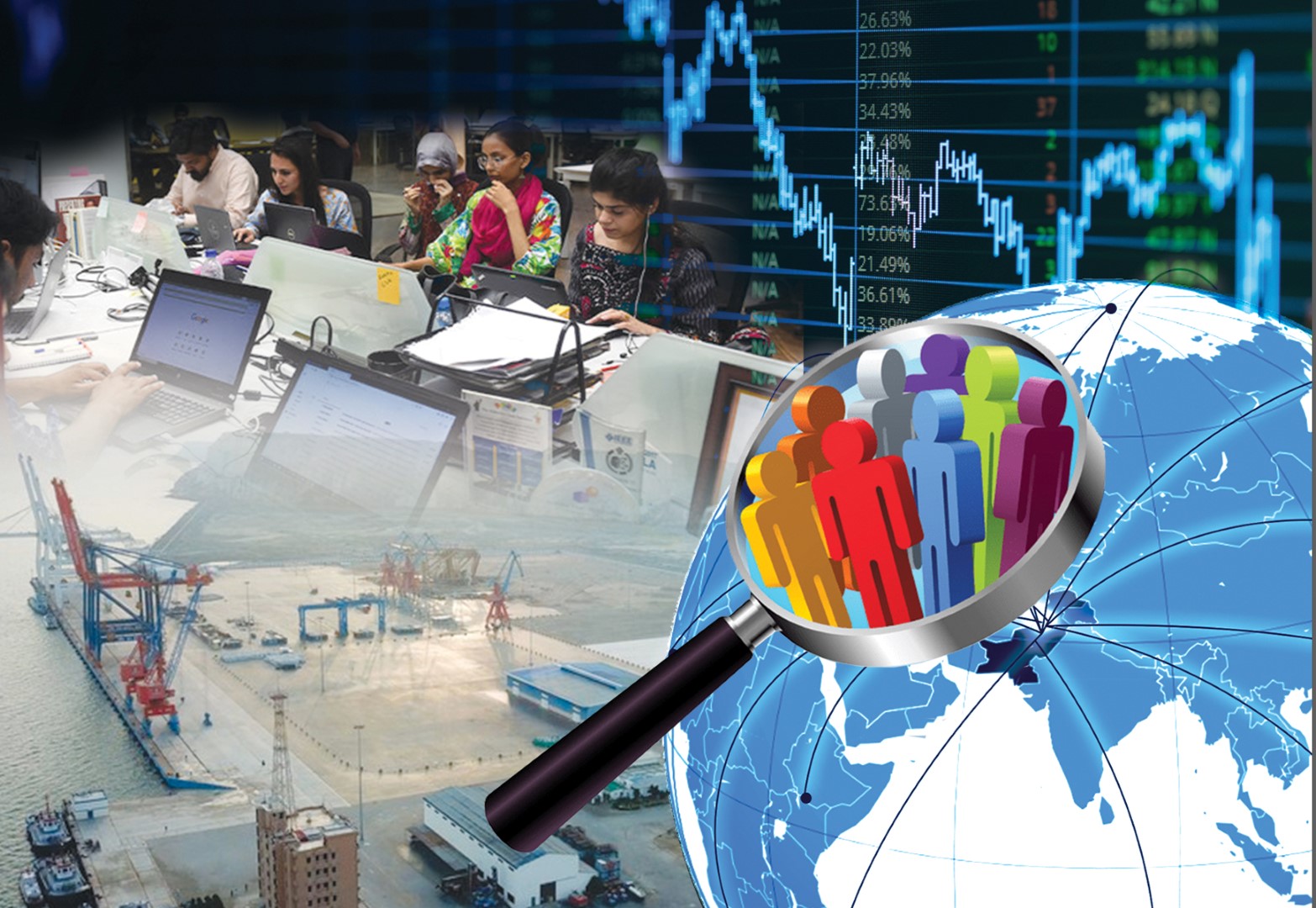 Talking about the economic situation, the country’s primary problem has been the inability to raise domestic resources for financing development. The tax-to-GDP ratio remains low and this means excessive reliance on foreign flows. Also, Pakistan is one of the world’s largest countries that has remained poorly integrated into the global economy. The most important indication of this is the low export to national income ratio.
Thus the question arises, why be positive about the situation?
I believe that Pakistan is a rarity in the Muslim world, in particular in the eastern part of the geographical space the adherents of Islam inhabit. Pakistan is the only Muslim country in the eastern part of the Islamic world that is succeeding in developing a representative form of government. It has been successful in using the electoral system for moving power from one political party to another.
However, Pakistan is yet to develop the discipline of psephology that uses demographic attributes of a society to interpret the results of elections. Those who practice the discipline can correctly read the politics that support political organizations. It is my belief that the ruling party has the support of the urban youth, which is the fastest growing segment of the Pakistani society. Pakistan is urbanizing more rapidly than other large countries in the developing world.
In spite of a low domestic savings rate and a largely dysfunctional public sector, we can still be positive about Pakistan’s economic future. This is due to four reasons: the country’s geographical location; its well-endowed agricultural sector; human skills that in some areas (metal and leather working, for instance) have resulted in developing small-scale enterprises that could become important components in the international supply chains that now dominate modern sectors; and a young and large population that can be turned into an economic asset rather than becoming an economic and social burden. It is geography and demography that are the most important pointers towards a happier future for the country.
Geography provides the vital link between China’s western provinces and the world outside. That is one reason why Beijing is spending billions of dollars in developing what is called the China-Pakistan Economic Corridor (CPEC), which is likely to turn Gwadar into one of the more important ports in the world. If Afghanistan settles down, CPEC could be extended through it to the resource-rich countries of Central Asia. Better regional connectivity could provide Pakistan’s well-endowed but poorly developed agricultural system opportunities for switching towards an export-oriented sector of agriculture.
In the late nineteenth century, the British rulers of India brought irrigation to the virgin lands in Punjab and upper Sindh to generate grain surpluses for feeding the people in the food-deficit provinces of Bengal, Bihar and Orissa. These provinces had lost hundreds of thousands of lives because of recurrent famines and the British, still living with the memory of the mutiny of 1857 which they had put down at the cost of many more lives, did not want a new source of local resentment. They did not want another rebellion against their rule. London appointed a succession of Famine Commissions, the last of which recommended using their colony’s land – not yet committed to agriculture – to produce additional food grains. Following the Commission’s recommendations, the British administration in India tapped the waters of the Indus River System to turn this bit of geographic space into the granary for their colony. This is the system of irrigation and agriculture Pakistan inherited upon becoming an independent state. However, it is bad economics to use irrigated land for producing grain and fibers. Pakistan has continued to do that. It should now move towards the production of high-value crops and animal products. China could become a major market for these items.
Demography is another reason for rethinking Pakistan’s economic priorities. The country stands out in the world that is now witnessing rapidly declining birth rates. There are now 14 countries that have more than 100 million people each. Pakistan, with 220 million people, is the fifth largest. Of the 14 countries, Pakistan, with a population growth rate of more than 2 percent a year, is growing at the third highest rate. Only Nigeria and Ethiopia with population growth rates at 2.6 per cent a year have higher growth rates. A birth rate sustained over a long period of time means a very young population. The world’s median population is 30.6 years which means that one-half of the population is below that age. Pakistan’s median age is only 23.8 years or 78 per cent of the global average.
These numbers mean that, for Pakistan, such a large and young population could become either a burden or an asset. To be the latter, public policy must be designed in a way that the youth could add to the country’s economic strength. The youth’s involvement in two sectors can produce this result: One is the development of information technology; and the other is the development of small and medium enterprises that could enter global supply chains. Both need educated and well-trained work forces. Pakistan needs to invest in developing institutions both in the public and private sectors designed to produce such worker streams. The members of the Pakistani diaspora, with good knowledge of the skills the rich world needs but can’t fully meet because of declining populations, could invest and guide the development of such institutions in Pakistan.
What I have proposed here is a significant shift in the country’s development paradigm. This involves increasing domestic savings and investment rates. It also means improving connectivity with the countries and regions in the neighborhood. The state should aim to increase the export of non-traditional products, in particular from the sector of agriculture. A serious attempt needs to be made to produce information and communication technology products for domestic as well as international markets.

The state should aim to increase the export of non-traditional products, in particular from the sector of agriculture. A serious attempt needs to be made to produce information and communication technology products for domestic as well as international markets.

The World Bank, in its latest assessment of the state of the Pakistani economy, expects the country’s GDP growth rate to increase to 3.4 per cent in 2021-22. This would mean a complete turnaround from a decline of 0.4 per cent in 2020-21. That decline was because of the unexpected arrival of the COVID-19 pandemic. According to the Planning Commission, the economy will grow at 3.94 per cent in the year 2020-21. The government’s growth projection for the year 2021-22 is 5 per cent as indicated in a statement submitted to the National Assembly by the government. According to the Finance Minister, the government is drawing up a plan that would cover the short, medium and long-term which would require action by the state as well as the mobilization of the citizenry so that the people begin to show willingness and work for bettering their future.
Modernization of the poorly maintained system is one of the important components of the China-Pakistan Economic Corridor Investment program that was under implementation in the 2020s. As already indicated, this investment program could end Pakistan’s virtual economic isolation by linking it closely with China and opening the country to the landlocked countries of Central Asia.
With the strategy I have proposed, Pakistan could achieve a sustainable growth rate of 7 per cent a year. Unlike the previous growth bursts, this could be sustained over a longer period of time. This way Pakistan could become South Asia’s and Muslim world’s “miracle economy,” a term the World Bank had used in its study of the strategies pursued by the countries in East Asia to achieve rates of growth without precedence in history. However, to move forward at this respectable rate of economic growth, the country would need to have adequate political, social and economic participation. This would ensure what Acemoglu and Robinson in the above quoted work called inclusive growth strategy.

The writer is a former Caretaker Finance Minister of Pakistan. He also served as Vice President at the World Bank.
E-mail: [email protected]