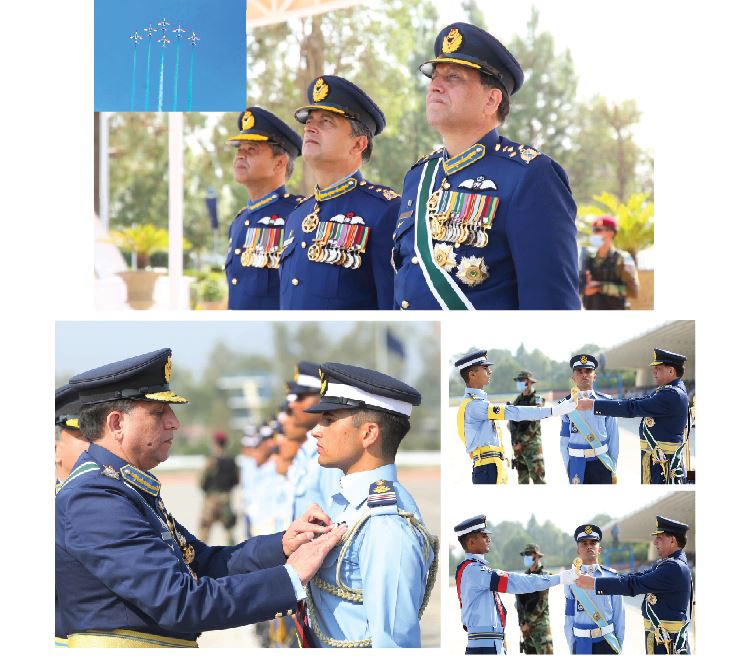 While addressing the audience, the chief guest said, “I am proud that the Armed Forces of Pakistan are professionally competent and well-trained to cope with all internal and external challenges. Our brave air warriors have always displayed great courage during testing times and upheld Quaid’s vision of PAF being second to none. I assure you that PAF is very well poised to preserve our freedom at all costs”. The Air Chief also emphasised that “Pakistan is a peace-loving nation and desires to maintain friendly ties with all countries. However, our desire for peace must not be misunderstood as our weakness. Let me make it clear that there can be no peace without a just settlement of the Kashmir issue. We condemn the grave human rights violations in Indian Illegally Occupied Jammu and Kashmir (IIOJK). I urge the international community to play their role in ending human rights violations and atrocities in IIOJK”.
Addressing the graduating cadets, he said, “Remember, today is the beginning of your journey in PAF as an officer. You have been trained well at this leading Air Force Academy and must continue to work hard in order to keep abreast of the latest developments in technology, modern concepts and current trends related to the role of air power in modern warfare. You should also seek inspiration from the legacy of our forefathers who, despite tough challenges, kept PAF’s flag high”.
The ceremony was followed by a thrilling aerial display by PAF Academy aerobatics team Sherdils. The graduation parade was witnessed by military and civilian dignitaries as well as parents of the graduating cadets.