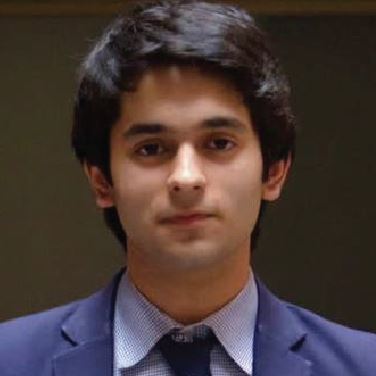 The recent past is filled with disasters that are clearly ascribed to climate change. The recurrent heatwaves, wildfires and floods highlight the repercussions of the unchecked use of fossil fuels and practices that are not environment-friendly. 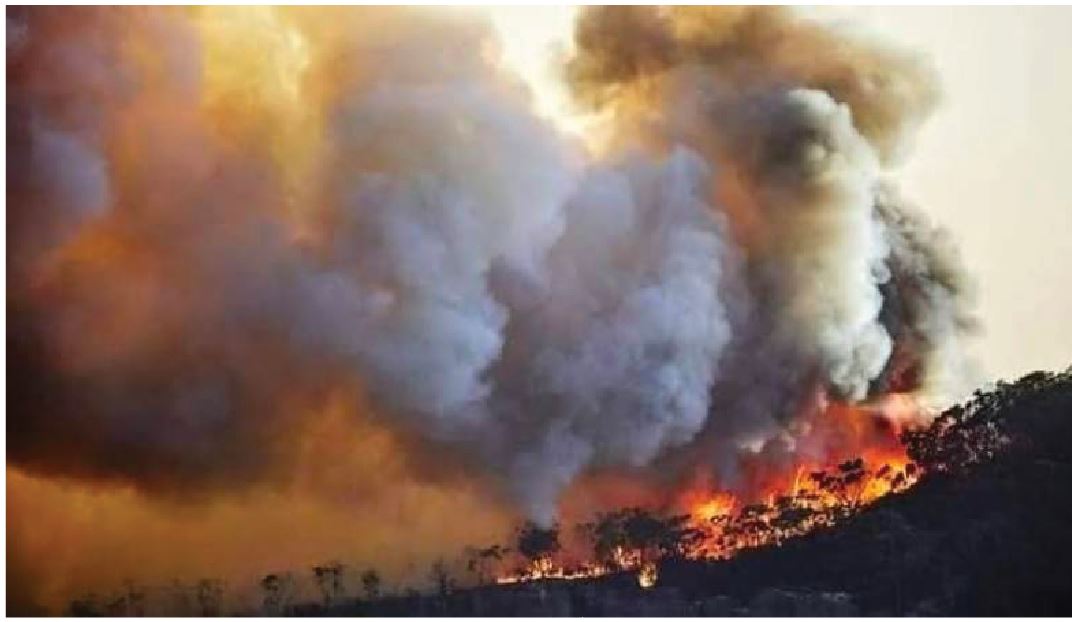 There are things that can be controlled, then there are the un-controllables. The talks about climate change and its effects on the universe and especially human lives have been going on for a few decades now and the experts are trying to find out any possible way to strike a balance between the extreme weather conditions across the globe. There are parts of the world where humanity is going through droughts and calamities that are directly associated with climate change. The world has seen enormous wildfires across different continents in the recent past which resulted in massive destruction of trees and of course the wildlife. Countries like America, Australia, Brazil, the United Kingdom, India and Pakistan have suffered great losses of human and animal lives, forest and vegetation and many other valuables during the past decade due to these wildfires.
Recently, a deadly fire erupted in the pine (Chilgoza) forests of the Koh-e-Suleman Range in the Shirani forest. It is one of the largest fruit-bearing areas in the country near the Balochistan-Khyber Pakhtunkhwa border. It is home to more than 10.8 million pine trees. Huge flames, reaching high up to the sky, roared ferociously as they gulped down one tree after another, forgiving nothing that came in its way. The experts blame the extreme temperatures and human interference for this catastrophe.

Excessive heatwaves in different parts of the world have been observed which is uncharacteristic for the cycle of seasons. The quality of air index, air pollution, noise, heatwaves and all of these terms have normally been associated with the third world or underdeveloped countries, but its effects are now reaching the developed as well. 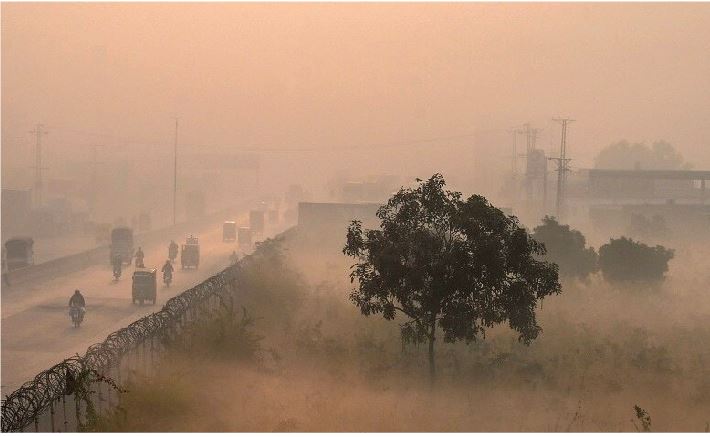 The shortage of drinkable water across the globe has become a burning issue with the passage of time. The humanity is facing the challenge of providing clean drinkable water for the survival of human life, especially in the third world countries. There are a few countries who are touching the lowest levels of available freshwater resources and rely on rainwater. That’s one side of the coin when we talk about the effects of climate change. There’s shortage of water, droughts and weather behaving differently in different times. The weather, the rain cycles, the winters, the summers, the monsoons, everything has changed over the years in different parts of the world. We have seen temperatures crossing 40°C in the United Kingdom for the first time in history.
Excessive heatwaves in different parts of the world have been observed which is uncharacteristic for the cycle of seasons. The quality of air index, air pollution, noise, heatwaves and all of these terms have normally been associated with the third world or underdeveloped countries, but its effects are now reaching the developed countries as well. Indian subcontinent is one of the most affected by these deadly effects of climate change. Every year, we see an increase in fog, smog and excessive rainfall. The quality of air is worsening every year, whereas pollution is increasing.

Men and women, young and old, everyone has been affected. COVID-19’s effects were slowly but gradually being worked over, but this disaster has pushed these areas into survival mode again.

This year, we have seen an increase in rainfall as the monsoon is wreaking havoc across India, Bangladesh and especially Pakistan. We are experiencing the worst flash floods across the entire Pakistan. We have had irregular and excessive rainfall across the country which has resulted in floods in all the rivers, especially the ones in Balochistan, Sindh and Southern Punjab. We are facing a humanitarian crisis in most parts of the country where hundreds have lost their lives, millions have become homeless and edibles worth billions have been destroyed by these floods. A human catastrophe is right in front of us where schools, hospitals, mosques, homes, hotels, roads, and infrastructure, everything has been destroyed. As they say in Sindh province, there is not a single patch of dry soil left; everything has been destroyed. Men and women, young and old, everyone has been affected. COVID-19’s effects were slowly but gradually being worked over, but this disaster has pushed these areas into survival mode again. The civil society has stepped up in providing relief to the affected people. Pakistan Army as always is taking the lead role in these operations. Local and international Non-Governmental Organizations (NGOs) have started providing food, shelter and medical facilities to the affected people. I personally visited Taunsa Sharif and Dera Ghazi Khan with my NGO called Falah. The 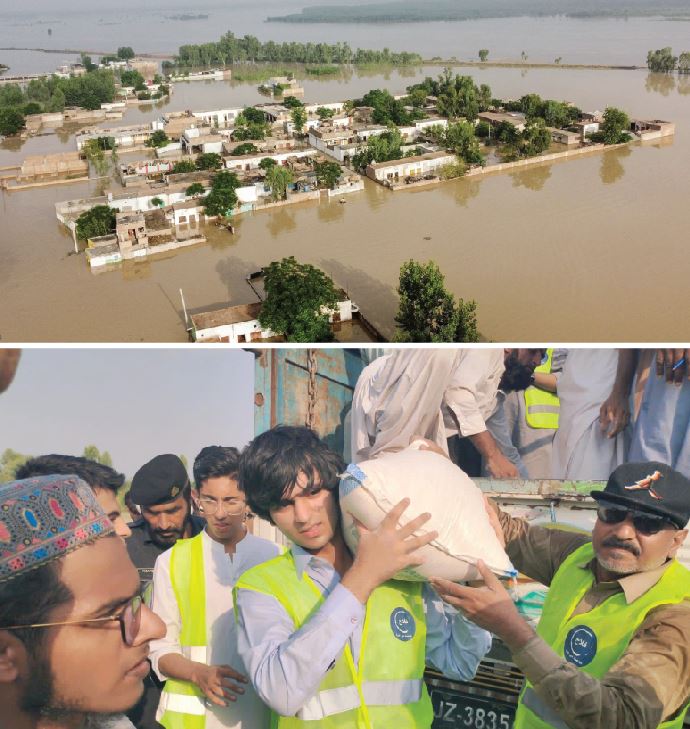 magnitude of devastation that we saw was heart-wrenching. We could not stop our tears upon experiencing the worst than ever humanitarian and environmental disaster right before our eyes. There were kids who could barely crawl and they had lost their parents, their homes and God knows how will they be able to survive this situation. There were mothers seen crying for their lost kids, men devastated by these floods whose eyes were blank and they could not gather themselves from the losses that they have suffered. Their homes, families, animals, and belongings have been swept away by the floods. Falah is a student-based NGO with very limited resources, but we tried our best to help out these people in need. Now is the time to serve our country and help our countrymen in need. We, as a nation, have to step forward quickly and do our bit to help these people who have been left under the open skies without home, food, clothes and medicine.
Recently in July 2022, I was part of a two-week Young Leadership Program which took place at Oriel College, University of Oxford, UK. I came across students from different parts of the world. To my surprise, most of them were less bothered about their own attire and more worried about the environment. The world is slowly but gradually coming to a point where the youth of these most affected countries have to step up and play their role in the revival of the environment. The question to ponder is, are we giving our next generations a healthy environment to live in? Are we making arrangements for our future to breathe in fresh air? Are we doing anything to protect our future? I think, we, the youth have to make an effort to start making our environment better and make our world sustainable for our future to breathe in and live in. The winters are just round the corner and we may face severe cold waves, excessive snowfall over the hills, more fog and smog and there may be chances of this fog spreading to more parts of the country this season (God forbid). We must be proactive and we must take effective measures right now because tomorrow is going to bring in more questions to answer.
Now as we are going through this crisis, there are certain measures that I would like to suggest to be taken immediately for the flood affected areas. There are some long-term solutions as well.
▪ It is suggested that the Government and relief agencies set up mobile medical units immediately so that the sick and affected can be treated immediately. The magnitude and the area of the devastation is so vast that we must take care of all the survivors, especially the pregnant women who may need constant medical help and treatment.
▪ The devastation of schools has hampered the education sector which had already been hit hard during COVID-19, so I would suggest that immediate makeshift schools be set up where kids can continue their education with the help of local educated people. Education can create awareness as well which is required at every stage of recovery.
▪ Preventive measures should be taken to stop the outbreak of viral diseases. People should be given awareness about dengue especially, as it spreads very quickly these days.
▪ The government must shift its focus towards clean and green energy. Developed countries must help the developing ones to decrease their dependence on fossil fuels, which are destructive for the environment.
▪ Water storage capacity must be increased along with efficient water management systems. The infrastructure along the riverways must be cleared. Policies must be climate-preparedness based rather than climate reactive.
We must protect our environment, plant more trees, build more dams, strengthen our infrastructure and plan better to prevent ourselves from facing floods every year. We either face shortage of water or these flash floods every now and then, where water is in so much abundance that it is uncontrollable. This imbalance of excess and shortage is going to play havoc with our lives in the future if not addressed at the earliest. We have to strike a balance as soon as possible by planning better for the future.