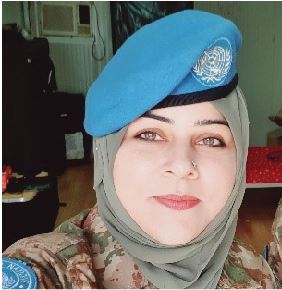 The phone rang and I attended the call. The person on the other end confirmed, “Is this Maj Dr. Sidra Malik?” “Yes,” I replied. “Ma’am you have been selected for United Nations Mission in Darfur. You will be called for Pre-Departure Formalities (PDF) shortly,” informed the person. This was indeed a fateful call, one that can give any Lady Officer (LO) a rush of mixed emotions. Questions like, who would take care of my children while I’m gone, what would the work environment be like and how I will manage, flooded my mind. Once out of this state, I discussed the matter with my husband and family. My husband is also a military doctor and has always been very supportive. His continuous encouragement and support pushed me to finally say, ‘yes’ to the mission and I am so glad that I did. 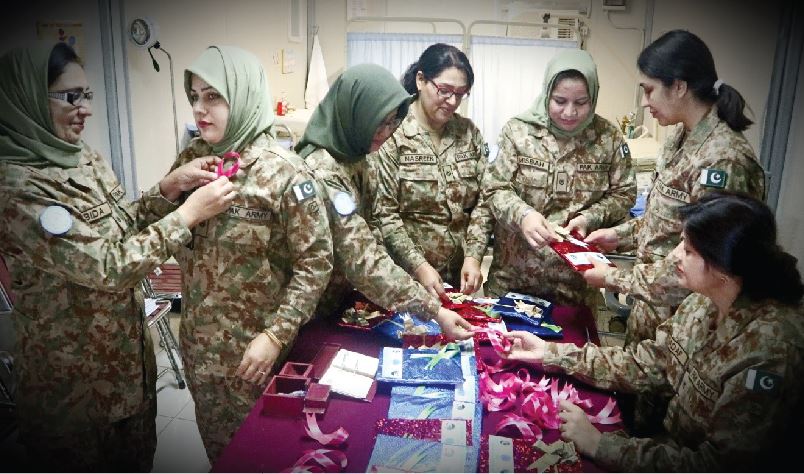 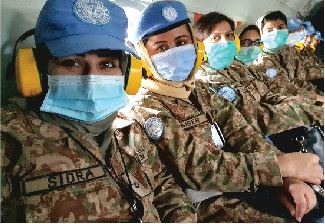 I left for Rawalpindi from Karachi on February 6, 2020, for the PDF. As soon as the plane took off, I thought that this was a rehearsal for my family and I for what to expect when I proceeded to the mission area. As soon as I landed in Rawalpindi, we were informed that the Secretary General of United Nations, Mr. Antonio Guterres, planned to visit Pakistan on the invitation of the Prime Minister. Mr. Guterres attended the program, Pakistan’s Peacekeeping Seminar and Photo Exhibition as the chief guest at Centre for International Peace and Stability (CIPS), NUST. I was designated as one of the Conducting Officers at the event. LOs who had come back from their deployment also attended the event. The interaction with them, in particular, was enlightening; they guided us in the right direction. This fortunate exposure served as a morale booster. I was determined to make the most of this opportunity and make it memorable. 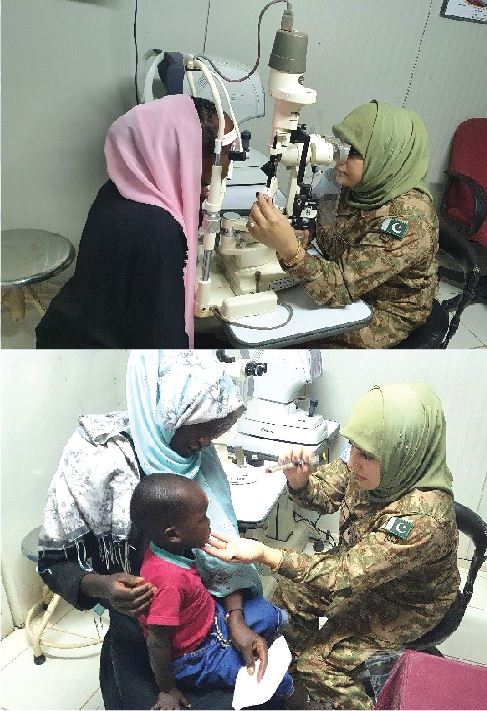 During my stay in Rawalpindi, I got a chance to get to know six LOs who were to join me in Darfur. Four other LOs who were attached to the neighbouring Infantry Battalion in Darfur to the one I was going to be attached to, gave me a much-needed boost that helped me to break the ice with my colleagues. Little did I know that they would turn out to be the true depiction of the phrase ‘Sisters-in-Arms’.
Once we completed our PDF, we waited for the flight schedule. However, destiny had other plans for us. COVID-19 spread like wildfire and forced the world into lockdowns. Our thoughts and prayers were with our brothers and sisters who were stranded in Darfur.
Amidst the turmoil, a flexibility was seen in the disease severity in August and so after being tested negative for COVID-19, finally on September 11, 2020, we took off for Darfur and life took a new turn.
We landed at Al-Fashir International Airport on September 12, 2020, from where we were taken to a temporary quarantine facility for 14 days. It was a tough experience but all of the contingent members helped each other get through it. We lived in temporary tents, which had little heat proofing. It was hot and humid for the most part and when it rained, it felt like everything would drown within minutes. The time spent at the camp allowed us to experience true fauji spirit and we started operating as a unit.
On September 26, 2020, we moved to Pakistan Field Hospital-12, our home away from home. Once on station, we immediately started establishing our departments. We were assigned duties. I was given the additional responsibility of Public Relations Officer (PRO) and ‘Event Planner’, both of which were a new experience for me. This meant frequent interactions with the local populace and international actors in promoting a positive and soft image of UN as well as Pakistan Army. I was to be the face of the contingent. We were also detailed to carry out Medical Patrolling and I being a Classified Eye Specialist participated in those as well. Doctors would take turns and go on patrolling to the nearby villages and towns. We would gather patients, especially focusing on maternal and child health. We educated the locals, particularly women, on common diseases, their prevention and treatment. By the end of the mission, our unit successfully published many articles and received acknowledgments from numerous officials. I believe we were successful only because we worked as a team, as one unit. 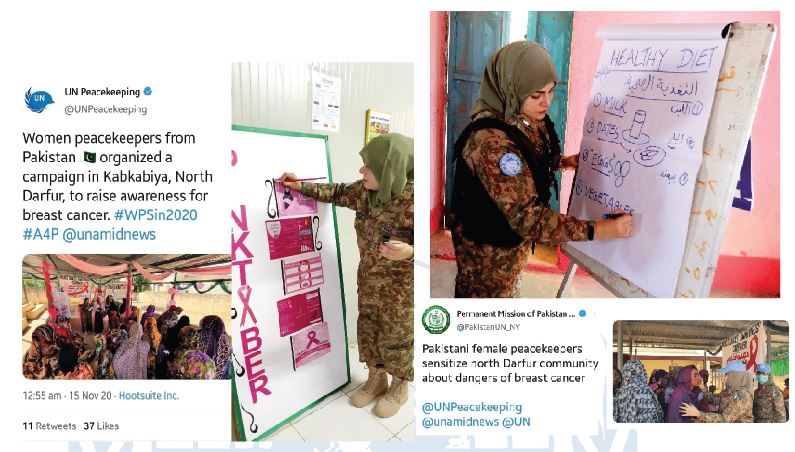 In October, we started preparing for the UN Day, which is celebrated every year on October 24. Considering the lack of awareness about breast cancer in the local populace, we requested our (CO) to keep ‘Breast Cancer Awareness’ as the central theme for UN Day. Our CO immediately accepted the idea and was the first one to put on the pink ribbon. Our contingent organized multiple Community Outreach Programs in the nearby villages, telling the locals about the significance of the Pink Ribbon. We interacted with females in the area and informed them about important aspects of breast cancer. The campaign was a huge success. Women from all spheres of life joined us in raising awareness about breast cancer. Thousands of patients were also given medical examination during this multi-disciplinary free medical camp. The campaign received acknowledgment and appreciation from UN officials and from the Ministry of Foreign Affairs, Pakistan.
Later in December 2020, International Day for Persons with Disabilities (IDPD) was organized by our unit. Local Sudanese children with disabilities linked to Eye, ENT and generalized leg weakness were already being treated at the hospital. Detailed discussions and meetings amongst different specialties were carried to chalk out a rehabilitation plan for the patients. By the grace of Almighty, we were successful in rehabilitating many patients in the coming months.
During all these activities, a part of my heart was constantly in Pakistan. I would try to call my family daily. My sons would always welcome my calls with huge smiles on their faces. They would go on and on about their day and inquire about mine at the end. Omar Shahzad Nayyar, who was ten at the time, sent me regular emails. They would be so happy to see my videos and pictures in UN uniform. Unfortunately, in January 2021, my husband informed me that he had tested positive for COVID-19. Those fourteen days were the toughest days of my stay. I was thousands of miles away and could not do much for my husband and kids. I was extremely worried about my family. But my friends helped me through this difficult time. The senior-most LO played the role of a mother she was always very caring, protective and a very patient listener when it came to listening to our problems. Following my dilemma, she gathered all the LOs in the lounge and we offered special prayers for my COVID-infected family. This gesture on the part of my Sisters-in-Arms will always have a special place in my heart. We tried to keep ourselves busy in different social activities and ensured that none of us felt left out in difficult times.
Weekend rituals were the best! We used to take turns doing laundry, then we would engage in our beauty regimens; everything had to be done together and as a rule with background music and khaaba. We were surprised at how these activities were reminiscent of our hostel lives. And now in pardes, it was all the same, we used to keep each other engaged and occupied so that none of us would feel lonely. Nevertheless, we all had those melancholy moments where we missed our families a lot. But there was always a shoulder to cry on.
There were countless tender moments that were shared and cherished between us, some made us laugh some made us cry. After we reached the mission area, the following month I had my wedding anniversary, and everyone understood the blues I was feeling prior to that date. Hence, a surprise event was arranged for me by the other LOs. It was a splendid change and I have to admit that it was the best celebration ever. They decorated the whole ladies mess with colourful dupattas, balloons and ribbons, played desi beats in the background and gave it a touch of mehndi like celebrations. We sang songs, our friends from the neighbouring unit made pizza, cake and some desi delicacies. We sang the traditional tappay and thoroughly enjoyed this candid and fun-filled evening. I am left astounded as to how much these gestures can have a lasting effect on your spirit especially in pardes. 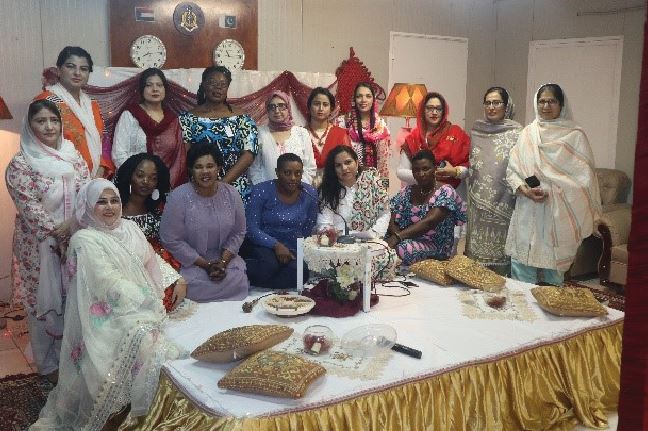 This esprit-de-corps did not fade even when we used to plan for any Civil-Military Coordination (CIMIC) activity like ‘Medical Patrolling’ or ‘Field Medical Camps’. Weeks ahead of the event we would sit together in a bunch and over tea we used to brainstorm and come up with themes, ideas, suggestions and plans to make the event colourful, successful and helpful for the local community. For medical patrolling we would make colourful cards, goodie packs, stationary packs and sweets that were distributed to the needy. We painted educational posters and banners by hand, to address common health problems and create awareness. As I was also part of the ‘Event Management Team’, my fellow LOs would always lend a helping hand and help decorate the area according to the theme.
Soon we found ourselves packing our belongings as it was time to fly back to Pakistan. We all went through the same rush of mixed emotions. We were extremely happy but also sad. Sudan was a unique experience and I am honoured that I was given a chance to be a part of something great the beautiful moments in the mission area gradually and intricately spun together like daisies in a beautiful garland, a garland so special that its scent will always remain fresh in our minds. The spontaneous laughter, the tears of joys and the emotional roller coaster brings back nostalgia whenever we think about Darfur. All of us, after having such a positive experience, encourage other LOs to go ahead and not let go of this life-altering opportunity. It is worthy of mentioning that we all had one common feeling about this mission, we all felt privileged as we were exploring new horizons in our service. We travelled and interacted internationally, served under the flag of UN to promote Pakistan’s image beyond borders and that too in such a cordial and protected environment. After all, it is sheer luck that you go abroad and serve your country, be its pride, and serve humanity, all in one neat package. HH