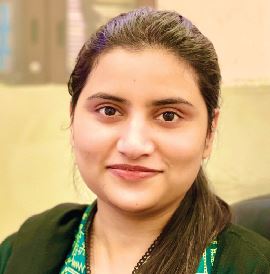 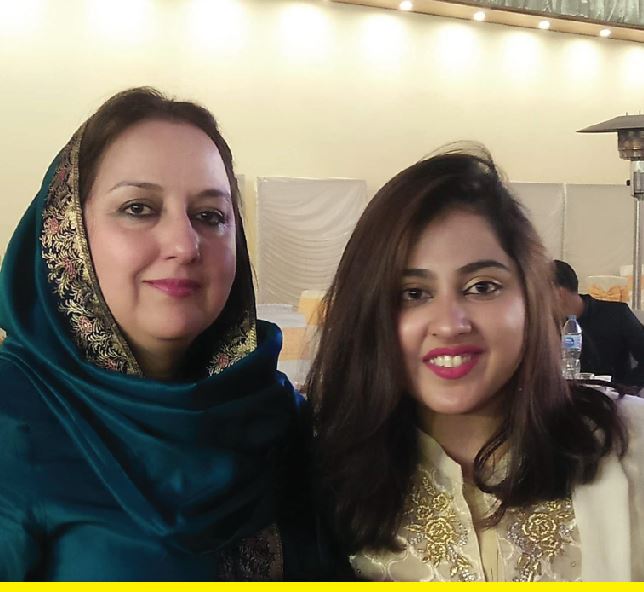 Freedom demands continuous sacrifices and our nation has been making them since the idea of a separate homeland was conceived by the Muslim leaders of the subcontinent. The brave men of our Armed Forces have always stood fast, with courage, zeal and zest to tackle menaces that aim at weakening our country. It is because of the immense sacrifices made by them, that we have been able to vanquish all enemies — overt and covert, external and internal. Their bravery and valour is much acknowledged and appreciated, however, what is often overlooked is that it is not the soldier alone who fights but his family and friends as well. It takes a lot of courage to go through the arduous phase of fear and uncertainty of sending a loved one to the battlefield but the families of ghazis and shuhada do it without hesitance for the love of the country; they accept it as a test of their mettle by Allah and they strive to stand strong despite their personal feelings. One such story is that of Mrs Almas Tirmizi and Mrs Ramsha Omar, mother and wife of Maj Omar Tirmizi, a ghazi who stood his ground in the battlefield despite being seriously wounded.
The early 2000s saw the contagion of terrorism taking its toll on Pakistan in the wake of 9/11 attacks. The rapidly growing threat of terrorism took deep roots in the Federally Administered Tribal Areas (FATA) of the country. The Armed Forces of Pakistan, as always, took on the responsibility to defend the country against this new threat, which required a different skill set to fight an enemy that was not always discernible. In 2007, during the initial phase of the Operation Sherdil, Lt Omar Tirmizi, a young man of only 21 years, recently passed out of PMA, was posted to Bajaur Agency ­— an area, which was a hot bed of terrorism at the time. The young officer, despite knowing the risks, volunteered for a clearance and link-up operation being conducted by his unit 63 FF, out of sheer passion to help rid the motherland of the ugly infestation that plagued Pakistan. After the successful completion of the first phase of the operation that was of clearing Tang Khata area, the officer set out on the mission to evacuate his neighbouring company on September 24, 2008 (coincidently the second anniversary of his passing out). Leading from the front, amid the hail of bullets, Lt Omar successfully managed to evacuate the company from the minacious battlefield. Just as he had evacuated the last of the injured, a Taliban rocket hit him on his left thigh, leaving a hole in the flesh and bone in its wake.
He was evacuated by a soldier of his platoon and he was then taken to CMH, Peshawar. Over the next few months, he made slow but steady recovery; he went through a number of reconstructive surgeries and was bedridden for almost a year, unable to make even the slightest of movements. Gradually, moving to the wheelchair then to assisted walking, Omar, now a Captain, learnt to walk again. The physical and mental toll that this long incapacitation must have taken on him can hardly be imagined. And to think that he was alone in this is an understatement, to say the least.
He was not suffering alone during this difficult time, his parents, sister and later his wife shared the agony with him. They soothed his pain and stood with him through the most painful time of his life. Today, he continues to serve his country and he gives his family all the credit for their constant support that he is able to do so.
Mrs Almas Tirmizi, mother of now Maj Omar, is an epitome of grace, strength and utmost bravery. The way she dealt with the news of her son’s injury during the operation and the following hardships is truly inspiring and serves as an example for the mothers of this nation. The more I talked to her, the more I realized that it is the strength of the mothers that is reflected in the bravery of our men who put their lives on the line. Her emotional strength is eminent from her response to the news of her son’s injury. She started with telling me about his posting: “Omar was deployed to Bajaur Agency, along with his battalion to be a part of the counter-insurgency in FATA. His unit was about to be posted somewhere else. I was happy knowing that he will soon be out of the hard area, until one day he called abruptly saying that he wanted to hear my voice. I knew something was off, I could feel it in his voice. I asked him if he was going on a mission so that I may pray for him, to which he responded in the affirmative. I spent the whole night on the prayer mat, pouring my eyes out in front of Allah, praying for my son’s wellbeing. It was the end of Ramzan, I remember. I had planned to finish reciting the Quran the subsequent day. I don’t know when I fell asleep on the prayer mat. I got up after sometime to finish some chores before I proceeded to recite the Quran.

“It was a little while before I saw my husband coming home earlier than usual; he seemed a little out of sorts to me. He asked me to pack my bag because we were leaving for Peshawar. Trying to stay as calm as possible he told me that Omar had been hit by a bullet in his thigh. I somehow managed to control my emotions, probably because Omar had talked to his father himself while he was being taken to CMH Peshawar. I knew it in my bones that something was going to happen, a mother’s intuition, maybe. It, however, took me a few minutes to swallow the news. I tried to think logically that my son was only injured and not taken by Taliban. I was nothing but thankful to Allah for saving my Omar, despite having a gut feeling that it wasn’t just a bullet and that his condition must be worse than what I was being told. His condition was even worse than I expected but I was still thankful to Allah that I was seeing my son alive.”
From being shell-shocked for a moment, to accepting the situation and thanking Allah, Mrs Tirmizi sets an example of courage and composure for other mothers of this land. Although she watched her son go through the pain and trauma year after year, all the while trying to cope with it herself, she did not lose hope or stumble even for a second. She said: “It was a rough journey for the next few years, but we have come out of it, Alhamdullilah.”
She lost her mother, her only daughter and her sister-like cousin within a span of four months in 2012, while Mrs Almas was taking care of her son. “I either used to cry for days or not at all. I was going through depression, and had to seek a psychologist’s help to overcome it. I found peace in accepting what had happened. I accepted that there’s good in everything that Allah has written, that the three of the closest women in my life are now at a better place, that Allah would never have put this burden on me if I hadn’t had the courage and strength to bear it. It was in that acceptance that I was able to cope with my loss, all the while dealing with my son’s pain, who was bedridden at that time,” said Mrs Almas.
I was left asking myself what could possibly make a woman strong enough to deal with unbearable loss, to stand staunch against fear and trauma that gradually takes over a person and consumes them. 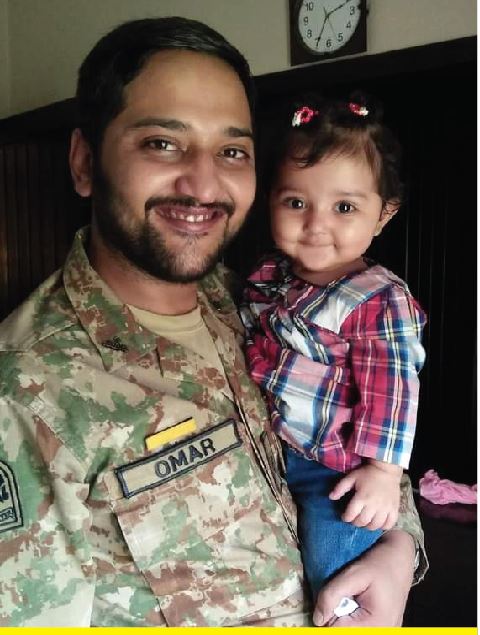 The answer to my questions was provided by Mrs Tirmizi: “I strongly believe that Allah blesses the mothers of ghazis and shuhada with the strength to deal with these situations, which otherwise seem impossible. It is in our relationship with Allah that we find peace no matter how hard the situation.”
As if Mrs Almas’s personality was not enough to awe me, I was to be further amazed by her daughter-in-law, Ramsha, wife of Maj Omar. I was no less than astonished to hear her side of it; the strength of her character and the positivity she possessed had me in awe. Mrs Ramsha Omar, a young beautiful woman, who seemed strong, resilient, bright and bubbly, decided to marry Maj Omar despite his injury and frequent visits to CMH. She narrated the story of her proposal: “I was overwhelmed when his proposal came. He came with his family for me and my family to see him because he didn’t want to keep anything from us. My parents were extremely happy, however, my sisters and brother were a little reluctant, which was quite understandable. I said ‘yes’ to the proposal as there wouldn’t have been anything bigger than the honour of being the wife of a ghazi. I got married to him in August, 2015 and started the most challenging yet beautiful journey of my life.”
She continued, “People told me that it would be difficult with Omar’s injury but despite the challenges we faced our bond has grown stronger over time. It was only after a month of our marriage that his health issues began, starting with the toe infection. We were posted at Mansar Camp. The infection had us moving back and forth between Mansar and CMH, Rawalpindi. The moment we tried to settle down in our routine in Mansar, Omar’s infection sent us back to the hospital. We spent over a year like that with the infection instead of getting better, exacerbating day by day. This could be challenging for a newlywed couple because most of our time was spent in the hospital, but we were together and that’s all that mattered. Omar, at times, got agitated and frustrated but I soothed him. I knew he needed me and I couldn’t just not be there.”
While she was explaining this to me, I kept wondering how a woman can be so positive spending the golden period of her marriage in a hospital.
While telling me about Maj Omar’s toe amputation, she said: “Our daughter, Maheen, was born two months prior to his amputation. It was a painful time for us, but Alhamdullilah we managed to get through it. Omar learnt to walk again. I am happy that I was there to support him during this tough time.”
She added, “At times Omar asks me if his limping has gotten any better, I tell him that I never really notice if he’s limping or not, all I care about is that he’s here with me and that’s enough.”
How could an enemy vanquish a nation that has such strong women standing behind their men, who are with them through thick and thin? The bravery, valour, strength and courage these women, and more like them, possess and depict truly commendable and I cannot help but think that it is because of such magnificent women, that our country is now safe from the menace of terrorism. Ghazis like Maj Omar and the shuhada of this pak sar zameen have defended this land at the cost not just of their own physical wellbeing but also of their family’s peace. While children of Maheen’s age scatter their toys around and their fathers pick them up, Maheen has to pick her toys up herself so her father doesn’t have to go through any pain; while others get to play outdoor games with their fathers, Maheen is proud knowing that her father is a ghazi and that he made a great sacrifice for the country even if he cannot run to catch her. HH