If you want to know and feel what is ‘magical’ in Pakistan, understand the Kalasha (Commonly called Kalash) and ideally help them after you visit them in their valley. I went to visit the Kalasha to get to know the Kalasha and write about them for my work and I lost my heart to them. The journey there was not easy: PIA flights which we had booked both ways to Chitral got cancelled so in the freezing cold of late December, in 2018 with my young daughters aged nine and twenty-three, I visited them by a terribly dangerous road, most of it very bumpy dirt-road, with no barriers and plunges down cliffs that would give the bravest of us humans goose bumps! The journey lasted about seventeen hours.
But the trouble that it takes to get there is completely worth the journey: the Kalasha are a beautiful people. They are proud of their ancestors and rich history. They say they were rulers of a wide area which included much of Chitral and Afghanistan. As descendants of Shalak Shah who was a general in the army of Alexander the Great and who stayed behind in present day Pakistan, they have a sense of Greek pride. Their sense of ‘self’ is so positive, as leaders and rulers, that many of them have named themselves and their children after thinkers and heads of state: Iqbal, Quaid-i-Azam, Bhutto, Zardari, and Nawaz Sharif, even Razia, named after the Queen, Diana, and so forth.
The Kalasha said they were attacked twenty five times by other peoples and tribes and during this time they lost a lot of precious belongings, possibly even their sacred texts. They like to be referred to as the “Kalasha”, in contrast to the “Kalash” which they say the Chitralis call them. The Kalasha see themselves as peace-loving people and their leader and elected Chairman Saifulla Jan Taj said that for hundreds of years, not a single Kalasha has ever killed another person nor have ever stolen anything, because both murder and theft do not exist in their culture and religion. When I spoke with the local Chitralis, some of them said, “The Kalash are Christians”, others said, “They are kafirs”. The Kalasha elders told me that they are not ‘kafir’. Kafir is used for a person who denies and is ignorant of God, but they believe in one God. Millat Gul, the daughter of a Kalasha Qazi said, “We believe in doing good and we believe in Allah, eik khuda and call him Khodai. We are not kafir!”
The Kalasha family unit is strongly bonded and during our visit we saw that all the brothers and their families lived next to each other. Families live in houses made of wood, stone and mud – all natural materials, and all their houses are beautifully made. Even in the severe cold of the winter the stoves that were placed in the centre of the living rooms would warm up the rooms while at the same time being used for cooking. Men and women both help at home and in the kitchen. “At birth, baby girls are as welcomed as baby boys,” I was told by my twenty-two year old friend Razia, daughter of Bhutto, who caringly put us up in her home. And girls in the valley have now attained high levels of education, including Master’s degrees and some even aimed to do their PhDs. Most want to be professionals. As people, the Kalasha are caring, hospitable and warm, greeting each other and their guests every time they meet with “Ishpatha!” meaning hello or salam. Even relations between opposite sexes are not cold or formal as they are in many tribal families elsewhere in Pakistan, but are human, natural, and warm.
Marriage is often a result of love and couples who love each other beforehand either run away together during festivals or take their mothers’ approval. During the Chawmus festival I attended in December, around thirteen couples got married out of love. But if a girl is not happy, she may decide to leave the marriage and this is not at all considered bad, I was told, even if she has children from the marriage. So their women do not suffer in silence and in pain as many women do in difficult marriages. There are many other rules of the Kalasha way of life based on giving people space and recognising their human needs. Customs are based on purity and pollution: women are often confined to a bashali house during childbirth until they are pure ten days after birth. Men are forbidden in these places to give women space for rest and recovery. 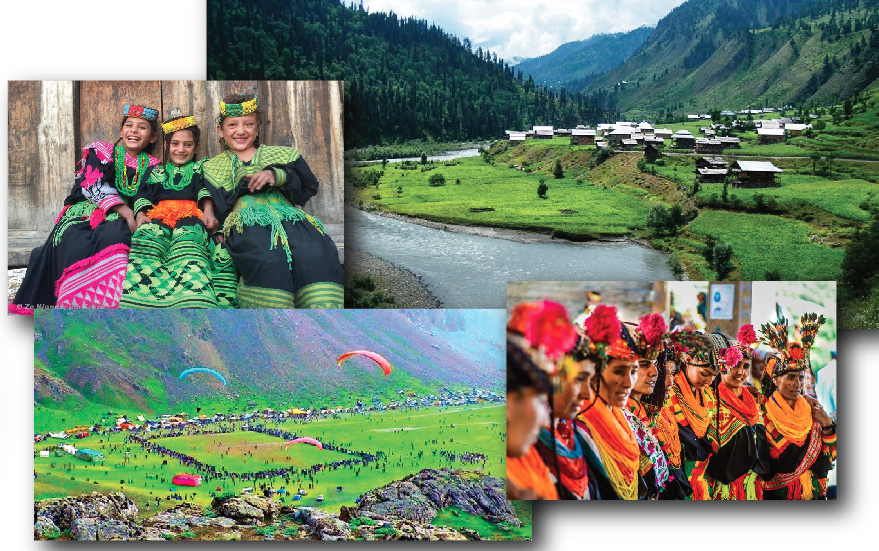 But the Kalasha, as lovely and attractive a communal family as they are to the world – as they draw so many foreigners and locals to them every year – have many unresolved problems and challenges. They seek and request the government to build proper and safe roads to their valley, to put up hospitals, to build universities and colleges in their areas so they do not have to travel all the way to Chitral and Peshawar to study under “bad teachers” as one young university going Kalasha girl told me, and they wish for employment so that they may improve their living conditions further.
The beautiful Kalasha girls, dressed in unique and colourful clothes also spoke of being harassed, even to this day, particularly men who want to take their pictures and worse who perceive them as sexual objects. Kalasha women have been forced to put on a shawl and cover their faces because of harassment from male visitors from other parts of Pakistan. But as Arab Gul, the archeologist, said to me, “We Kalasha girls may not wear the head covering like the Chitrali women, but we have a lot of self-respect and honor. We are not just our clothes; we have a rich culture and heritage. We want to be seen with the eye of ezat – honor – and dignity.”HH

The writer is the Executive Director of Markaz-e-Ilm, the Centre for Dialogue & Action (CD&A) founded at the University of Cambridge.
E-mail:[email protected]