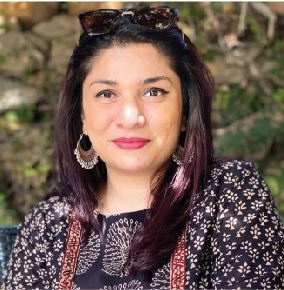 Revival of Folk Music in Pakistan

March 2 was celebrated as Baloch Culture Day to promote inter-provincial harmony in Pakistan. A mega musical event was held by Pakistan National Council of the Arts (PNCA) Islamabad, in this regard, which featured folk artists and musicians including Kehkashan Khan and Banur Band. Honouring the unique and diverse culture of Balochistan, a huge number of university students and families attended the event. They wore traditional attires to highlight the rich and vibrant colours of Balochistan and performed Attan and Raqs Do Chaap, which mesmerized the audience and showcased how their love and affection for Balochi culture and traditions. Federal Minister for Education and Professional Training and Federal Minister for National History and Literary Heritage, Shafqat Mehmood acknowledged the efforts made by PNCA and said: “Balochistan is a land of various languages, races and cradles centuries old civilization. All this is the identity of Balochistan and Pakistan as well. We are committed to project the real image of Pakistan through our cultural heritage of all the areas of the country.” He insisted that such events be held more often that highlight cultural diversity, traditions and music. “Regional offices would be established in each provincial capital to promote art and culture in the country,” he added. 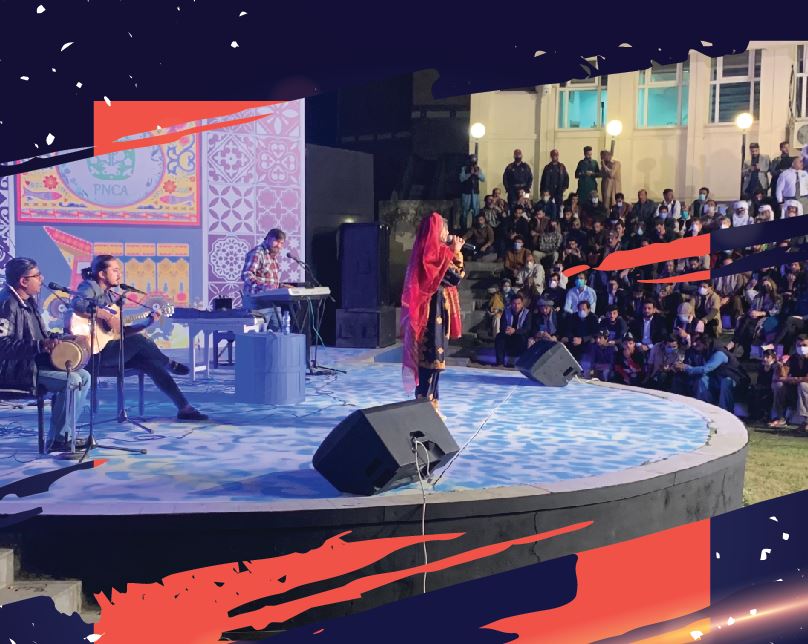 PNCA Director General, Dr. Fouzia Saeed, says that PNCA is working to establish regional offices that will help streamline cultural activities for promotion and projection of the arts and artists of far-flung areas. “Today's programme is a step in this direction,” she said. 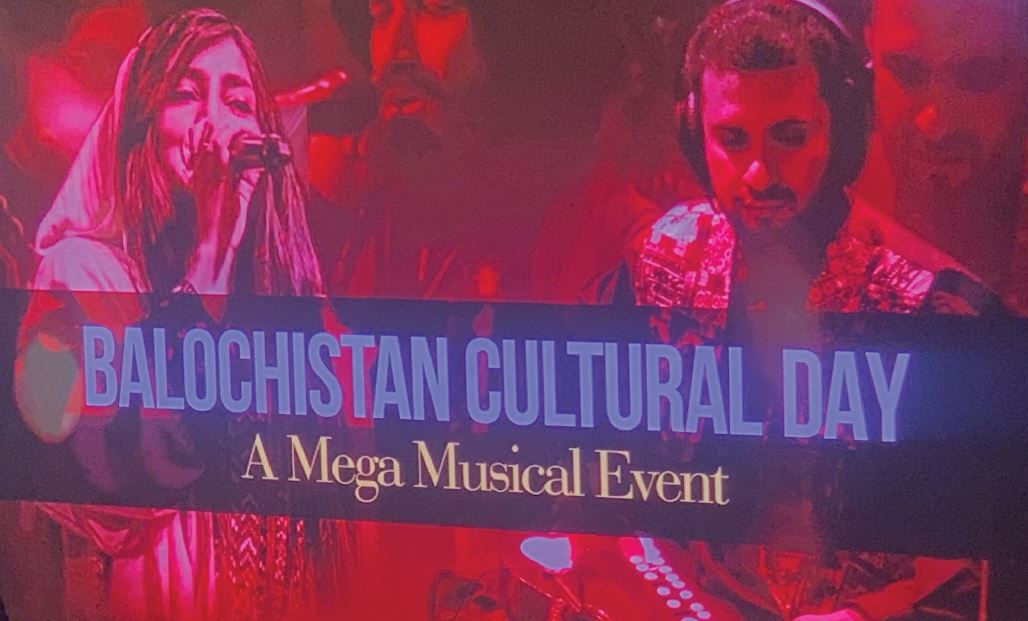 Balochistan is also known for its tribes, vibrant festivals, folk music, songs and folk dances along with the distinct tradition of storytelling. Balochi folk musicians and singers performed at the event but one stood out from the rest. Kehkashan Khan the only female folk singer performing at the event left quite an impression on the audience with her melodic voice.
Kehkashan hails from Rind tribe (Baloch tribe) and says: “People can give you a million reasons not to visit Balochistan but the reality is that Balochistan is raw and untouched. The beauty of Balochistan not only lies in its majestic mountains, sandy deserts, dark blue ocean and pebbled shores but also in its vibrant culture. True Balochis are known for their hospitality and I urge everyone that they should visit Balochistan at least once in their life.”
She began her singing career in 2012, in Karachi. She sang in Urdu and Sindhi at the time. When she moved back to Balochistan in 2016, she started to sing in Balochi as well. Her song Kamo Kamo became her identity and people started to recognize her talent nationwide. She recalls: “I felt compelled to become a folk singer from a young age and I feel privileged whenever I am given a chance to represent Balochistan. That being said, all my performances are dedicated to Pakistan and not just Balochistan. I also try to dedicate a song to Pakistan Army every time I go on stage. My song Yeh mera piyara Pakistan, Yeh mera piyara Balochistan is quite famous.” 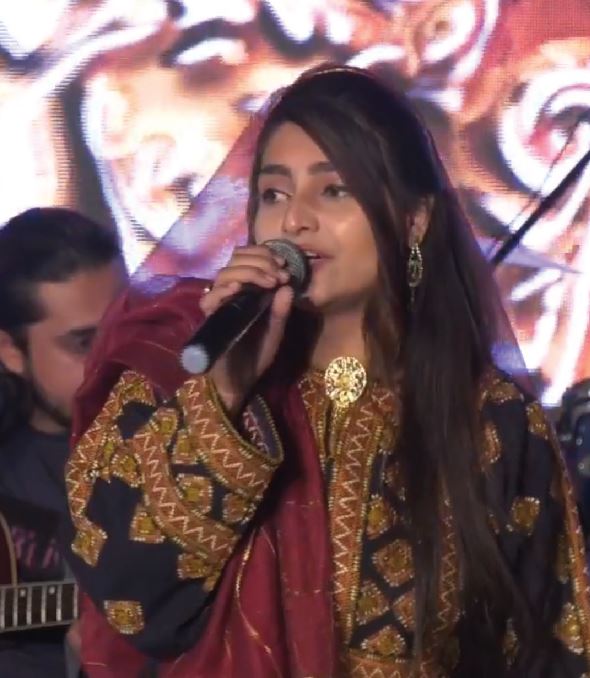 Kehkashan was inspired by her mother to pursue singing as a career. She shares, “Mama used to work as a singer and an actor on PTV. When she got married, she was not allowed to pursue a career as an actor and a singer. However, she always supported my brother and me. Her dream is that we get a good formal education and never stop chasing our passion. She has always pushed me to do better, she is my first teacher and I aspire to be like her.
“I am lucky that I have a father who is not only educated but also supportive. There were people who tried to create a fuss but he never let them succeed. He allowed me to sing and find a purpose, which is promoting the folk music of Balochistan.” Kehkashan believes that parents are the backbone and without their support, she would not have been able to succeed. They empowered her to embark on new ventures and encouraged her to follow her passion while maintaining the traditions of her tribe.
Female musicians and singers from all genres are defying gender stereotypes in Pakistan. Gone are the days when a drummer could only be a man and cooking was just for women. It is heartening to see that the youth of Pakistan, such as Kehkashan Khan is deviating from stereotypical roles and heading towards careers, which we never thought a woman could pursue. “We live in an era when pop music has dominated our music industry but it is only folk songs that best describe the poetry, which originates from the local culture. Balochi folk songs are popular around the world and many foreigners are known to visit Balochistan just so they can listen to folk music. Akhtar Chanal Zahri is another talented individual who has made a name for himself as a folk artist and there are many like him that are working hard to promote this genre not just in Pakistan but across seven seas.

“There are only a handful of female folk singers in Pakistan. Mostly because they are unable to find a platform that allows them to showcase their talent and also because people have forgotten about folk music. It is unfortunate to see that women in particular are disappearing from folk music, but efforts are being made by Lok Versa and PNCA to revive it.
“It is also true that once a female singer comes into the limelight, she is appreciated for her talent more than her male colleagues but the Balochi culture cannot be represented by either men or women alone. It is time that we as a community empower each other so that we all can come forward and pursue our passion whether that means becoming musicians, scientists, doctors or engineers, etc. Once both genders start to play their role in the society only then will we be able to promote our culture and tradition,” says Kehkashan.
Kehkshan Khan is an emerging folk singer who is striving to bring back folk music in Pakistan. She believes music bridges cultures and is a language that everyone can relate to because it has the ability to touch the heart. Folk music in particular has the power to narrate stories and emotions. Kehkashan says that the tradition of folk songs have a history that can take you back in time but can also be evolved to suit the new generation. The spiritual expression and soulful music in folk songs have been inspiring the masses from times unknown. They are an expression of love and devotion, which needs to be preserved for generations to come. HH