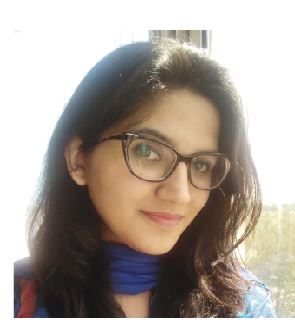 Regularization of Domestic Workers in Pakistan The Sooner the Better

Domestic help, though an informal sector, is one of the largest and oldest sources of employment in which women and children are key participants. However, domestic workers in countries like Pakistan are not registered and hence the exact size of their share in the economy 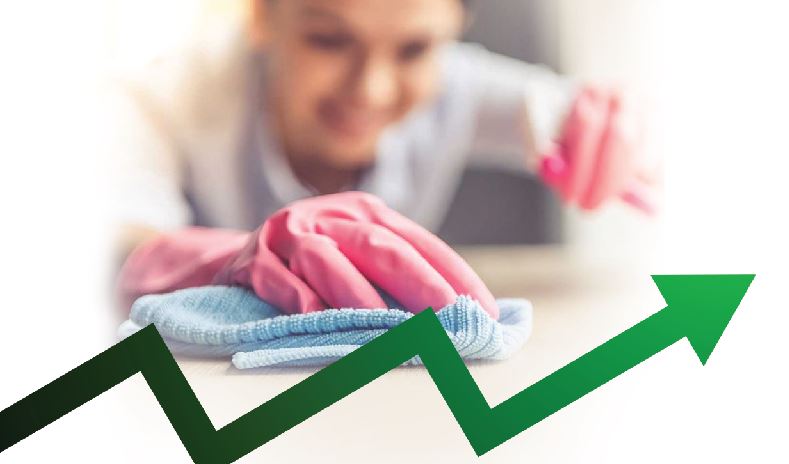 cannot be known. Moreover, since these workers are not regularized, their labour rights remain largely at the discretion of employers and center around the initial discussion about employment terms and conditions. Trapped in the vicious circles of poverty and illiteracy, many people have no choice but to work as domestic help for cleaning, cooking and caregiving in others’ houses. This job is easy to get, does not need any education, skill or documentation, but as a result of it not being registered it brings in many disadvantages with it, like long working hours, low pay, limited social and legal protection, etc.
It is no secret that domestic workers work overtime, are underpaid and often mistreated. Despite the employer’s acute dependence on the employee, respect is not always a part of the equation nor is kindness; to treat domestic workers with respect means to pay them minimum wage rate and not usually polite conversation.
The interesting point in domestic services is that commonly both employee and employer are women. Here the relationship of employee-employer is gender-free, but is developed on the basis of class and social difference. Usually the role of a woman is that of a caretaker and homemaker and thus this domestic role is outsourced to another woman. Men and women of upper and middle-classes benefit from the labour of domestic workers. One of the cons of this labour is its occurrence in a household — the personal space of the employer — which carries the risk of precarious working environment, being exposed to exploitation and abuse, and sometimes even unnoticed harassment.
In Pakistan, domestic workers are mainly females or children. Another subcategory of domestic labour is bonded labour where children under 14 years of age are employed under debt bondage. According to an International Labour Organization (ILO) study, almost 264000 children are working under debt bondage where nothing is paid to them and their services are a payback for the debt their parents may have taken years ago. The amount of debt might be minimal but the service inclusive of emotional abuse and overtime goes on for decades. The work is further classified as live-in and live-out (specifying day-based or task-specific employment type). According to the Labour Force Survey 2019, there are 0.46 million domestic workers in Pakistan out of which 0.364 million are task based and all others are live-in where they work without task and time boundaries.
The capitalist economy heavily depends upon the labour of working women, especially those engaged in domestic work. Women contribute a major portion of the labour force in care economy but receive minimal acknowledgement against their services. This strengthens the capitalist loop of exploitation. The increasing economic inequality forces women to engage themselves in risky work environments for  minimal wage. They have to choose between basic life necessities or the work environment, so very often they choose the former and compromise on the exploitative working conditions/environments. 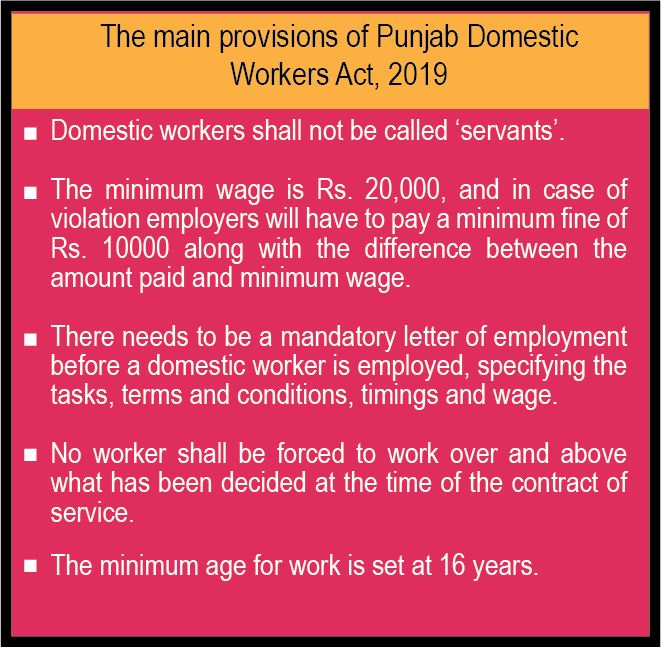 Until 2019 there was no legal framework established to protect the rights of domestic workers, as people engaged in this profession did not fall under the legal definition of a worker. The Punjab Assembly in January, 2019 passed the Domestic Workers Act, which aims at regulating wages, providing health and security cards and some measures to avoid exploitation at workplace. However, this law remains largely unenforced, unfortunately. It is important that the rights of domestic workers be regulated and enforced by law. If enforced in real terms, the Act will help bring confidence among the workers about their rights in the society.
Local domestic workers unions have also been formed and are operative in some cities of Pakistan. These gather domestic workers on some local points and let the workers share their grievances. The union leaders actively take part in registering the members through an Android app launched by Punjab Employee Social Security Institute (PESSI). This app registers and issues social security cards on priority basis. Although better than having nothing in place, the idea of an online regulatory system for domestic workers does not sound as promising as it should, considering the socioeconomic conditions of the workers it is made for. Many domestic workers strive for their daily meals and having access to android phones and technology plus education to feed the relevant information is not easy for them.
Many domestic workers lack access to information about their rights, and they do not believe the system even if they have the information. This disbelief is natural if we look at the non-compliance of Domestic Workers Act since January 2019. In order to regulate the domestic workers in a true sense, they need to be educated about their rights through small-scale awareness hubs and complaint points where they can raise their voice and share their grievances on community level to pull them out of invisibility.
The government is taking steps to protect domestic workers across the country. As a first step, electronic, print and social media need to be engaged to spread awareness about the existence of protection alongside looping in local unions. The first domestic workers union was registered in Lahore in 2015, more need to be registered. This awareness about the rights of domestic workers needs to be present among the employers as well.
With the hope of implementation of the Domestic Workers Act, we look forward to a better society with assured human rights and a better economy, but hoping for the legal enforcement is not all we should do. Charity begins at home, and after this read, let’s promise ourselves to be the best employers for the domestic workers at our homes. No law can be implemented or enforced with success unless the community for which it is devised receives it with conscientious regard. HH