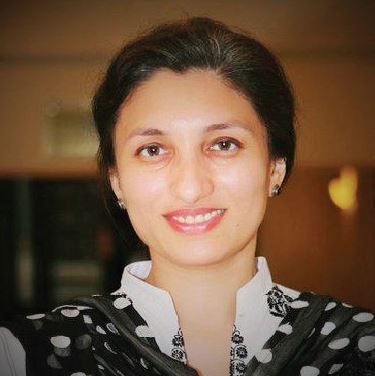 War has been considered the quintessential domain of men, with gender barriers always taking precedence in this field, given the specialized nature of this endeavor. Women’s inclusion in war or institutions affiliated with war and conflict has at best been marginalized. Women have commonly been viewed as victims, liabilities or collaterals in any armed 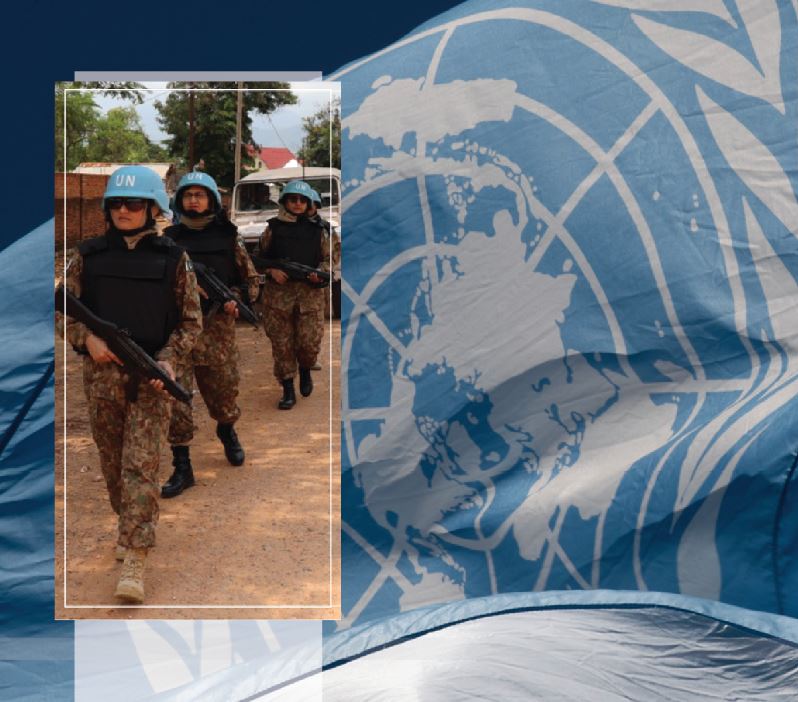 conflict rather than as an active agency or stake holders. This has and continues to shape the entire narrative regarding gender and conflict. In the Western advanced militaries, women fought for decades to seek equality in rank and file, to claim and create space for themselves in combat roles and positions. However, this struggle is still not over, as despite a slow and grudging acceptance, problems with regards to women’s performance, roles, space, specific needs, as well as harassment make the apparently well-defined professional sphere murky. A woman in uniform in the combat cadre, has yet to break the glass ceiling.
Contrary to popular misconception, women played an important part in wars of early Islam. Illustrious names such as that of Umm-e-Umara, Umm Sulaym, Safiya bint-e-Abdul Mutlab, and later Umm-e-Hakim, Jawariya bint-e-Abi Sufiyan, Hind bint-e-Utbah (earlier a staunch enemy of Islam), are amongst a select few who fought alongside men as active combatants. Even during the ghazwas, women routinely accompanied their men to the battlefield, partook service and logistical role, and were found encouraging and motivating the men to fight better through their verses and singing. They would cook food, keep the warriors hydrated, picked up weapons as well as spoils of war, and most importantly bore credible witness (Shahadat) in these wars. With the permission of Prophet Muhammad (PBUH), they tended to the wounded, thus indicating the permissibility of 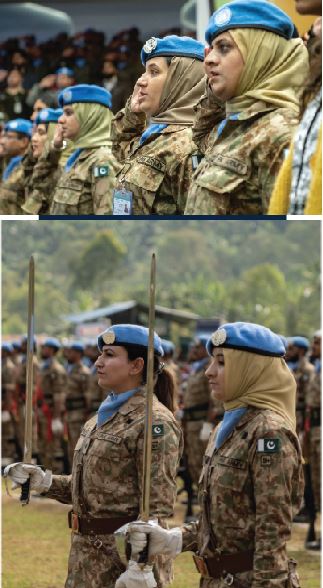 women nursing foreign patients. The entire household of Imam Hussain accompanied him to Karbala — the army of 80 people included the honorable women and minor children amongst whom many embraced shahadat at the hands of a despot, while the role of Hazrat Zainab post-Karbala shows the status and position women held in the battlefield and after.
The role of women combatants and war leaders did not end with this glorious phase. However, with time women disappeared from the battlefields — an aspect which has been considered symptomatic of women’s gradual retreat from the public sphere. Secondly, the presence of women in the battlefield has been attributed to the non-professional nature of early militaries, yet women remained an integral aspect of warfare, not as warriors but as victims and the most affected directly as well as indirectly by armed conflicts. The adoption of United Nations Security Council Resolution 1325 (UNSCR 1325) in 2020 became the global first in recognizing women as active stakeholders in conflict, peace, and security. If war has a direct or indirect consequence on women, and they stand most affected in terms of displacement, victimization, gender-based violence, abuse, harassment as well as impact on their families, then they have an important role in the prevention and resolution of conflict, peace mitigation as well as post-conflict reconstruction and rehabilitation. Through successive complimentary resolutions, stemming from UNSCR 1325, rape has been acknowledged as a war crime.
Women and children are the most directly affected population group and primary victims in a conflict and have to face the brunt of violence from all sides, their insecurities are not just personal but also structural. In this context, women peacekeepers can and have played a positive role in minimizing occurrences of such events and their presence allows victims to be more vocal leading to justice for them.
Realizing the need of incorporating a gender inclusive approach to peacekeeping missions in different conflict zones has surfaced as a key driver of their effectiveness. Recognizing the relevance of women in peace negotiations, peacekeeping and post-conflict reconstruction, and aiming to achieve greater gender parity in peacekeeping contingents, the United Nations Security Council Resolution 2242 pushed for increase in the participation of female peacekeepers by doubling their numbers in military and police contingents over a period of five years. As a result, following the adoption of the resolution, the proportion of female peacekeepers in UN peacekeeping missions has experienced an upward trend from 4.1% to 5.6%. The largest hike has been observed among female military observers and staff observers, whose presence has increased from 4.7% to 14.2%. 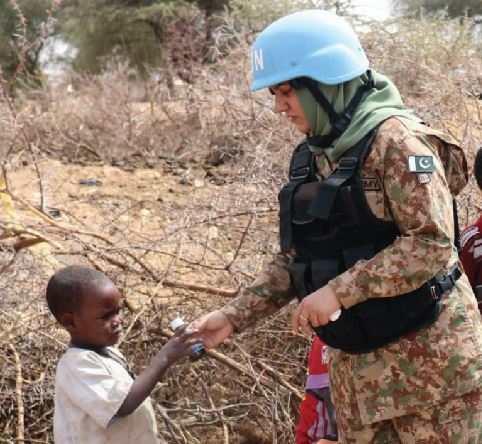 Committed to global peace and security, Pakistan is among the top five contributors of troops to UN peacekeeping missions, having deployed around 200,000 troops in the world over the past six decades. Moreover, Pakistan has also achieved the target of contributing contingent forces that comprise 15% of female personnel. Around 450 female Pakistani personnel have served in different peacekeeping operations around the world. Pakistan’s two Female Engagement Teams (FETs) have the honor of serving in Central African Republic (CAR) and Democratic Republic of Congo (DRC). Pakistani women officers are performing wide ranging duties as psychologists, to information technology (IT) officers, media and public relations officers, vocational officers, gender advisors and medical professionals along with responsibilities in operations, logistics and informational branches. Additionally, a number of civilian Pakistani women also serve in UN peacekeeping missions as volunteers. From the time of first female officer from the police service deployed in the UN Mission in Bosnia-Herzegovina in 1997, induction of Policewomen and civilian contractors from Pakistan has become a regular feature of peacekeeping missions.
There is sufficient evidence to suggest that women make unique and substantive contributions that advance the efficiency of peacekeeping operations. It was generally agreed in a discussion with women peacekeepers that their participation in peacekeeping operations has had a positive impact on the operational environment, but it is contingent on the religious, cultural, and social practices of the 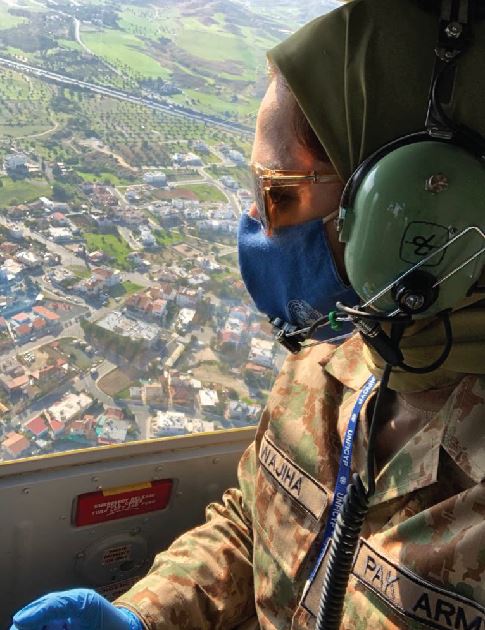 local community. The female officers deployed to Muslim populated conflict zones, in particular, notice a visible impact and positive contribution to the mission through their participation and the local community’s response. Many UN peacekeeping missions become stalled or are unable to finish their missions because of the lack of understanding of local customs and traditions. Pakistani women UN peacekeepers present a unique opportunity with most of them belonging to the Islamic faith naturally understanding many cultural sensitivities. This becomes even more important since many UN missions are located in or have segments of the population that are Muslim. Moreover, as the UN aims to increase the number of women peacekeepers and has acknowledged that women peacekeepers act as potential role models for girls in often male-dominated societies, their role is ever-more pronounced.
Female officers have been more receptive and able to respond to concerns about women’s physical safety, as women from affected communities are more vocal in discussing and reporting instances of gender-based violence to female officers than otherwise. Women peacekeepers’ presence and participation has noticeably improved conflict resolution and reduced the likelihood of use of disproportionate force thereby, de-escalating tensions.
For the UN peacekeepers, the year 2020 brought an additional challenge in the shape of the Covid-19 pandemic, and the women peacekeepers remained actively involved in assisting the governments and local communities as frontline responders and response teams in implementing the mission mandates, while taking all precautionary measures. Not only has the women peacekeepers’ presence and participation in key missions enhanced operational performance, it has further helped in positive perception building, through effective media management, greater access to communities, motivating and sensitizing women from the local communities, they have promoted human rights, built awareness against women and child abuse and violence. 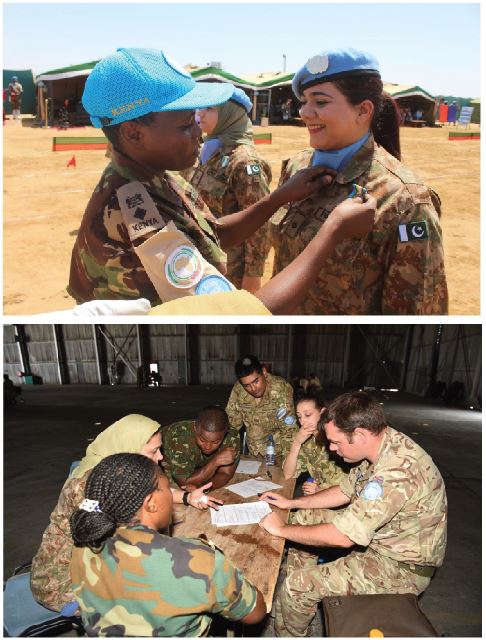 Furthermore, for any conflict-ridden society to have sustainable peace, women need to be made an integral part of the process, an aspect which is often ignored and deliberately overlooked, as per the UN Action for Peacekeeping (A4P), Pakistani women peacekeepers are supporting and assisting women participation in local peace processes, thereby making peacekeeping sustainable, more effective, gender responsive and inclusive. However, this journey has not been a perfect fairy tale, as the female peacekeepers have had to surmount numerous challenges in a predominantly masculine and patriarchal space to get recognition, acceptance and legitimacy to work and get heard.
Pakistani female peacekeepers’ journey so far may not be a long one, yet it stands distinguished. The induction of female peacekeepers by Pakistan Army started in 2017 and in the short span of five years, Pakistan’s contribution to UN peacekeeping stands at 17% which surpasses the required 15% deployment goal set by the UN. Pakistani Women soldiers who have served in different peacekeeping operations around the world along with civilian Pakistani women, policewomen and civilian contractors from Pakistan, have become a regular feature of peacekeeping missions, keeping the country’s flag high. Individual top performers, and the Pakistani Female Engagement Team (FET) have been awarded for their services leading to global applause and recognition.
For a traditional country such as Pakistan, the decision to pledge the desired 15% requirement for women in different peacekeeping operations is a major benchmark in women empowerment and its role as a frontline state committed to global peacekeeping and adherence to UN principles. Furthermore, these young and dynamic women peacekeepers through their performance and conduct have earned great laurels for the country, as well as upholding the high standards set by the UN, each acting as an ambassador of their country, leaving a major positive imprint on the local communities, and becoming a role model for future generations. HH