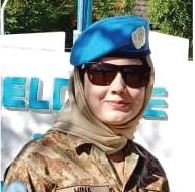 United Nations (UN) is an emblem of global peace and unity, a concept of international community materialized having suffered losses of unimaginable magnitude during the Second World War. Therefore, serving in UN is considered a lifetime achievement for any officer. However, the challenge has now moved from merely an armed conflict to addressing issues like gender disparity, lack of health and equal education, etc., in many parts of the world.

The UN’s peacekeeping mission deployed in Darfur since 2007, under the mandate of United Nations–African Union Hybrid Mission in Darfur (UNAMID) seeks to keep peace and bring stability in an intricate multi-racial and inter-tribal disputed war-torn region. As of 2021, 236 peacekeepers have died in the line of duty whilst serving in UNAMID.
As a Lady Officer (LO) from Pakistan, it was an honour for me to have been selected to serve in UNAMID as a Military Observer (MILOB). I completed special training at the Centre of International Peace and Stability (CIPS), Islamabad. During my training it was inspiring to see UN Secretary General António Guterres addressing fellow officers in the same institution and acknowledging the contributions of Pakistan Army towards global peace during his visit to CIPS.  This memory will always be an indelible and profound part of my experience as a MO. 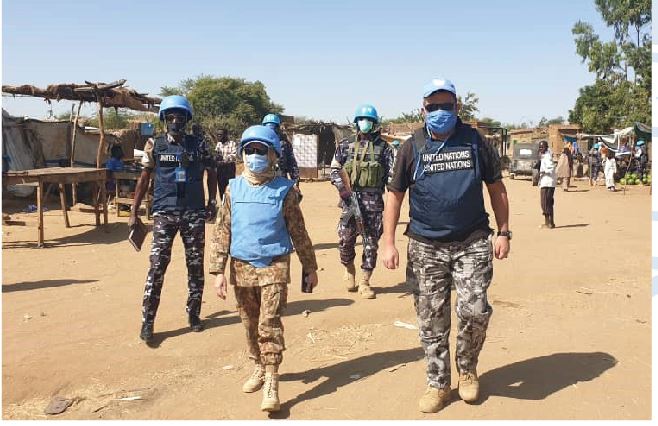 Initial Training
I landed at Al Fashir, Darfur in February, 2020. The training imparted to fellow colleagues and I in Al- Fashir was for a duration of 16 days. Having worked in Pakistan Army on technical, operational and administrative appointments, it was of course my first experience to be working as an MILOB. But like the reputation of our Armed Forces prevailed, I was up for the task and the training instilled vital aspects of teamwork with Individual Police Officers (IPOs) and civilians, security assessment, mobile and foot patrols, radio communication, which included interaction with civilians, how to behave and handle the situation when confronted by hostile tribes and locals. The training was necessary for my upcoming role. The day I received my certificate after a successful hostage negotiations in the final field exercise, I felt more confident and better prepared.
Journey of Being the First Pakistani LO Appointed as Military Observer (MILOB), in Darfur
I arrived at Zalingei (team site), Darfur, in March 2020 and was appointed as a MILOB. I had to shoulder the responsibility of being the first female MILOB from Pakistan in UNAMID. Setting out from Zalingei, I then undertook a number of patrols, community interactions, combat patrols along with a locally stationed Ethiopian Battalion, IPOs and civilians, whereby I observed and reported issues pertaining to security, gender equality, socio-economic conditions, and availability of basic necessities. 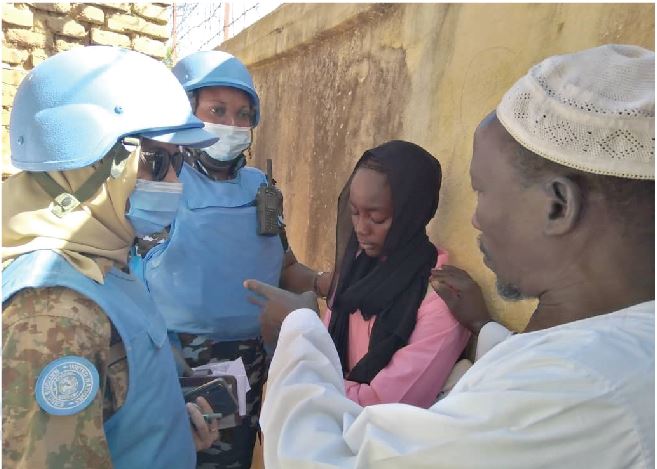 Major Actions Performed During Patrolling Patrol Leader
I worked hand in hand with IPOs and Peacekeeping Force as patrol leader of the entire group and thus contributed to the execution of all operational activities in the operation area. Patrols included Confidence Building Projects (CBPs), Protection of Civilians (PoC), Limit of Advance and Exploitation (LAE), Internal Force Protection Task (IFPTs) and any other assigned tasks.
Interaction with Locals and Security Assessment
The objective of our regular patrolling was security assessment and provision of security to the local population engaged in farming activities. Being an LO, I interacted and educated women on social issues. I requested them to move in groups even while fetching water, grass and firewood. Moreover, in the wake of impending UNAMID withdrawal by end of 2020, it became more imperative to monitor and verify overall security situation in our Area of Responsibility (AOR) and hostile activities against the local population, on a regular basis. I felt a sense of purpose when working for the betterment of my fellow beings. It was encouraging to see Pakistanis in blue helmets receiving huge respect from local populace and I could vouch that all our efforts were definitely worth it.
Women Empowerment/Gender Equality
During patrol, the exceptional reception and welcome gestures from the local women on finding a fellow woman in uniform was truly heartwarming. For them seeing Muslim women from Pakistan in uniform advocating for gender equality was sight unlike other. I was surprised to find the local populace already accustomed with Pakistan, its culture and the professionalism associated with our Armed Forces.
Gender equality is not only a fundamental human right, but an essential foundation for a peaceful, prosperous and sustainable society. We encouraged communities there to send girls to schools since seeking knowledge is a fundamental human right. I told them that Pakistan’s founding father Quaid-i-Azam Muhammad Ali Jinnah said: “No nation can rise to the height of glory unless women work side by side with men.” My presence amongst them was a true reflection of a moderate Pakistani Muslim society where women work side by side with men in every walk of life including the Armed Forces. I emphasized that educated women will raise an educated family and contribute more concretely towards a society where women are not subject to any atrocity in violation of their rights like child labour and early marriages. Being a mother and out in the field on an international assignment, I felt my words made an impact.
Sensitization on Prevention of COVID-19
The COVID-19 pandemic is the defining global health crisis of our times. To face this challenge, patrol teams have been educating the community. We emphasized precautionary measures such as frequent hand washing, staying at home when sick, not touching your face and wearing a mask when going out in public. Patrol teams advised the locals to go to medical clinics for checkup if any of them felt symptoms like fever, dry cough, flu or breathing difficulties.

The Visit Home
Being a mother of two kids it was natural that I missed home and what made it worse was a worldwide lockdown amidst COVID-19’s first wave between April to July 2020, meaning thereby that I was to see my family after a staggering seven months. I must admit, while delegating my share in the line of duty in Darfur, it was not easy to be away from my family in the middle of a global pandemic for such a long time. Availing my break in September 2020, I finally got the chance to spend time with my family and kids and honestly it was a meltdown inside when I was about to set off on my flight back to Darfur a month later.
Happiness Lies in Living with Diversity!
Living in Zalingei, I explored the unique experience of living together with people belonging to different countries with different cultures and norms. Women from Egypt, Zimbabwe, South Africa, Zambia, Namibia, Ghana, Jordan, Tanzania, Fiji and Pakistan all lived under one roof. We lived like a family, especially due to leave restrictions on international flights imposed by COVID-19; we laughed, enjoyed and ate together. We respected each other and celebrated various festivals like Easter, Eid and birthdays collectively. We made meals together and shared our cuisines. We felt honoured to learn about each other’s culture.
UNAMID’s mandate ended in December 2020. With effect from January 1, 2021, UN announced its phased drawdown leading to permanent closure/withdrawal by June, 2021. Upon completion of my one-year tenure, I was finally relived of my responsibilities from Zelingei in February, 2021 and repatriated to Pakistan. Although I was going back home, I left with a heavy heart due to an association developed with the place and the people. Almost 6000 UN troops, police representatives and a civil staff of 1200 have left Darfur. As a Pakistani peacekeeper and MILOB, I tried to leave behind the best possible impression of Pakistan and UN wherever I went in the line of duty. HH