Throughout history, Muslim women have exemplified reliability, commitment and honour. Their place has always been prominent in all spheres of life, be it political, scholarly, religious or domestic. Similarly, the women of the subcontinent have also contributed and participated in societal, political as well as public affairs to gain their basic rights and freedom from non-Muslims. As a matter of fact, active participation of Muslim women accelerated the struggle for Pakistan movement. Despite numerous struggles, sacrifices and constraints, women of the subcontinent fought alongside men in the independence struggle to achieve a separate homeland. Essentially, this struggle is an ongoing process and has helped visualize women as agents of change for an evolving society. Thus, present day Pakistan aims to provide best conditions and opportunities that sustain gender equality and female empowerment and allow women to play their vital role in the development of the nation. 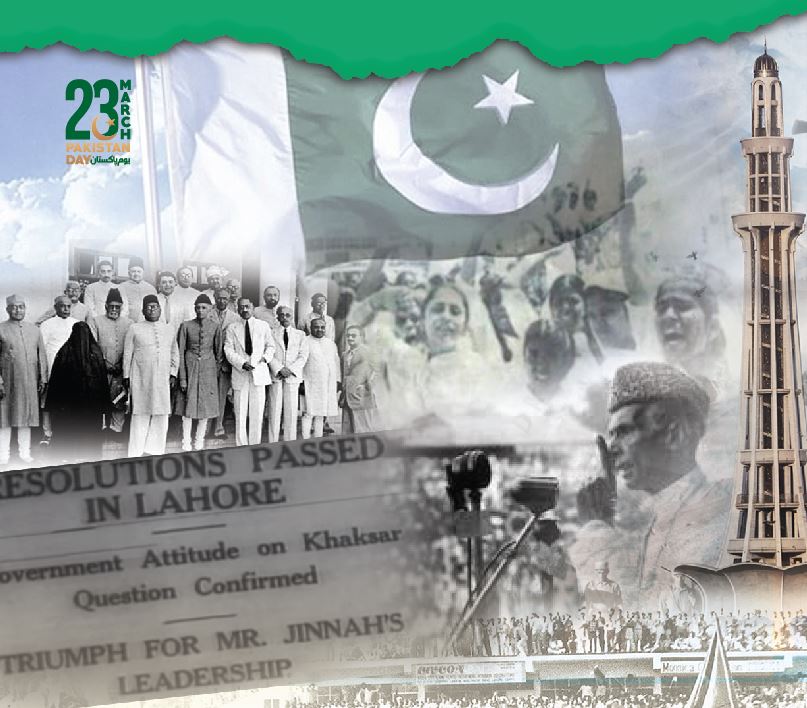 During the independence struggle, women proved to be the backbone of the movement, as they ambitiously came forward and supported the cause by gathering under the umbrella of an essential women’s wing in the All India Muslim League. This step was intended to create political awareness for the Muslim women of the subcontinent and urge them to join the cause. In view of the participation of women, Quaid-i-Azam Muhammad Ali Jinnah in his Presidential address at Lahore in 1940, stated: “If political consciousness is awakened amongst our women, remember your children will not have much to worry about … to advise and guide them in all such matters as mainly rest on them for the uplift of the Muslim society.”

Ghanva Nayab
"Women’s struggle was not just prominent during the Pakistan Movement but they have also played a significant role in every field including political after Pakistan’s independence. Today, women in Pakistan are yet again exercising their freedom by organizing numerous seminar and festivals every year, wherein they not only raise awareness regarding social issues but also, voice out the concerns of those women who are unable to do so. This reflects that Pakistani women are given a safe environment and platform where they can exercise political and social freedoms in a peaceful way, the way our founding father intended."

Sadaf Khalid
"The only word that comes to my mind, which best describes Pakistanis, is resilient; despite difficulties, Pakistanis have always rebounded from adverse situations. The strength of Pakistanis lies in their capability to overcome all barriers on the road to peace and progress. That is what we must remember today as a nation. We are a nation that recovered from deadly natural disasters, that survived ruthless attempts of our enemies and who, in spite of all uncertainty, have managed to defeat terrorism.
British historian Arnold Toynbee says that every civilization and society faces different challenges but the nature of the response is what decides their fate. Pakistan, over the course of its history, has proven that its people are resilient enough to emerge victorious in the face of hardship and suffering."

The passing of Pakistan Resolution on March 23, 1940, promised a united homeland for Muslims of the subcontinent and recommended the creation of an independent Muslim state. This demand of a separate homeland was significantly more crucial for Muslim women and their freedom. As it assured the importance of defending women’s rights as ‘equal citizens’ in the new Islamic state where they were not bound by forces of irrationality, where they would be given full freedom to attain higher education and take part in political activities to raise awareness and a voice to safeguard their rights. While previously, women were targeted unfairly on the basis of gender and were denied basic self-autonomy because of legislations such as the Shariat Application Act of 1937 (termination of life estate held by Muslim women under Customary Law) and the overcast Muslim Dissolution of Marriage Act of 1939, which undermined the position of women in the society and hindered their progress. In this regard, Begum Jahanara Shahnawaz insisted, “Muslim women are fully alive to their responsibilities today and are more impatient for Pakistan than men.”
Consequently, some Muslim women came out in support of the Resolution by simply following in the footsteps of their family members, while on the other hand, a large number reacted more independently in order to overcome their everyday hardships as they believed that Pakistan would be a place where they would be offered a better and a brighter future. In a sense, the Pakistan Movement led Muslim women of the subcontinent to improve their designated place in the society. As a result, women also provided support by taking direct political action. Maulana Sher Mohammed, popularly known as Maulana Abul Lais, after the events of Direct Action Day in 1946, praised the Muslim women and girls of Calcutta who came forward and did voluntary service. Moreover, Begum Liaquat Ali Khan, founder and president of All Pakistan Women's Association (APWA), urged Muslim women to exchange their national views on international platforms to compete with others. Through struggle and constant efforts, Muslim women of the subcontinent came out much stronger and presented themselves as noticeable individuals on international platforms rather than unknown isolated representatives. After gaining independence, women in Pakistan have continued to work and have represented themselves on all major political and non-political platforms. The efforts of Begum Jahanara Shahnawaz and Begum Shaista Ikramullah, allowed women to hold positions in the Legislative Assembly; they demanded separate seats for women in 1956, and promoted the acts of Muslim Personal Law of 1948, Muslim Family Laws Ordinance 1961, and Muslim Personal Law 1962, in order to encourage women’s participation in national affairs.

Maham Janjua
"Pakistan, to me, is the best country in the world. With rich, medieval, pre-historic and contemporary history Pakistan has some of the world’s most talented people working in multiple fields: the world’s youngest Nobel peace prize winner, the world’s youngest Microsoft Developer, some of the world’s most talented athletes, the South Asian region’s and Muslim world’s first three-star female general, and the first female head of government, to name a few.
Pakistan has achieved tremendous progress in its seven decades of existence and it continues to paint a colorful picture; Pakistanis continue on a slow but steady upward path towards a better future."

Huda Mirza
"Pakistan was created with the purpose of providing a land where its citizens could live their lives free of oppression and be able to flourish and thrive. It is highly commendable that Pakistani women are paving their own way and excelling in every field whether it is science, medicine or fashion. It is essential that we as a nation keep moving forward. We should support them for playing diverse roles in raising future generations, in shaping better societies and in contributing to economic development of our country."

Today, women of Pakistan not only have an increased political presence but are also running civil organizations, corporations, campaigns and are academically stronger, consequently contributing on a broader scale.  Constant efforts and leadership of women from the past and present should be remembered and celebrated.  The women of Pakistan have continued to play their part since independence but the need is for them to take on more responsibility and recognize that they cannot afford to be by-standers now that the march for freedom has become the march for development and prosperity.
In the era of modernity, there is immense focus on instituting justice and morality in state and non-state affairs on equal basis for everyone. Although, the presence of women in every aspect is an uplifting prospect for Pakistan, there is room for improvement. According to 2017 census report, nearly 64 million women live in rural areas. Unfortunately, they do not have access to equal opportunities, in either education, social or economic sectors. For this reason, there is a great need to amplify their voices and concerns, as they are the cornerstone of Pakistan’s economy. According to Potohar Organization for Development Advocacy (PODA), ‘‘79.4 percent of rural women are engaged in agriculture, as opposed to just 63 percent of rural men who are involved in fieldwork. Moreover, rural women in the country on average provide 4.9 hours of unpaid care and domestic work per day compared to 2.5 hours for rural men.’’
Primarily, much progress and future strategies are in play to tap into the potential of women in all spheres of life by helping enhance women’s participation and gender equality in all provinces with active involvement of governmental and non-governmental organizations. Women like Bushra Khaliq, Executive Director of Women in Struggle for Empowerment (WISE), hold political participation workshops in rural areas to raise awareness, i.e., fair labour wages, and education for girls.

Capt Maria Akhtar
"Many think tanks and media setups have tried to discredit Pakistan but events that have taken place since the Pulwama attack in 2019, have not only disgraced India but have also brought shame to the Indian Army. Pakistan has stood its ground every time and Pakistan Army has shown time and again that it will defend its borders no matter what the cost. Pakistan is a nation that loves peace but we will never allow any foreign or domestic power to threaten our sovereignty."

Tasmia Irshad
"Like International Atomic Energy Agency (IAEA) Director General Rafael Mariano Grossi said, “We can learn much from early pioneer scientists, diplomats and other women leaders. They can show us not only how far we have come, but also point out what we still have to do. Their legacy serves as an inspiration for the women who follow in their footsteps and for the rest of us who are working towards a more equitable workplace and world.” I believe Pakistan has given its women the platform in every domain, may it be science and technology, media and communication, military, police or arts, etc. It has allowed our youth to follow their dreams, which would not have been possible without Pakistan."

In recent times, underprivileged women have emerged by beating the odds. Daughter of a traffic warden, Nashrah Shakir was commissioned as a Flying Officer in Pakistan Air Force (PAF) and has become the first GD Pilot from Karachi. Dr. Saleema Rehman, an Afghan refugee was given a medical scholarship and became the first ever female refugee doctor in Pakistan. She says, “I have a duty to help women. I feel so lucky! In my community, many girls do not get this opportunity. I think it is in my destiny.”
It is true that there is a long route to cover, but the journey has just begun. Ongoing progress in all spheres of the society has provided great opportunities to the women of Pakistan. Their increased participation and constant struggle pays tribute to all those who have fought before them. On Women’s Day this year, we must appreciate women from all parts of the country. International Women’s Day in Pakistan should be an inclusive event rather than an exclusive one. By realizing the sacrifices, roles and potential of the women of Pakistan, we must embark on the path to become a source of inspiration for the future generation. So this Pakistan day, let us celebrate in unison and appreciate the real women of Pakistan who are striving to make Pakistan the country that its founders envisioned. HH