Seventy-one years later and India is still standing on a stretch of disharmony. A land comprising people from a range of different religious and cultural backgrounds, India is an amalgamation of diverse ethnicities like Hindus, Muslims, Sikhs, Christians and others. Although India opted to become a secular state at the time of independence, unfortunately choosing an ideology is not merely enough to establish national harmony or cohesion. Over the years, India has managed to benefit from economic liberalization. However, it has not been able to create solidarity among the people living there due to the ethnic and religious divides which have become problematically evident, resulting in parting of people in groups based on religious differences and giving rise to extremist divergences, paving way for a simmering cauldron of conflict. 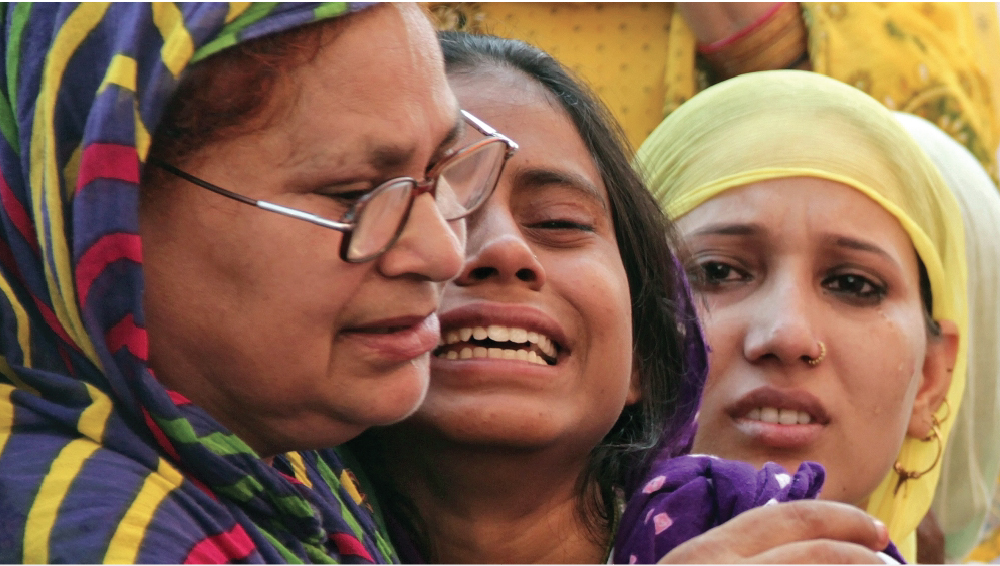 Today, sadly, the situation has worsened and India faces a backlash of its so called ‘democratic policies’ owing greatly to the behaviour and actions of the current ruling Sarkar of Bharatiya Janata Party (BJP). The present Prime Minister Narendra Modi’s ideology propagates severe threats to the state’s minorities. His views and assertions on labelling India as a Hindutva state is leaving less ground for other religious groups to continue to exist in peace. Moreover, this is constructing a harsh reality for ordinary people as they face violence and disruption in their daily lives at the hands of Modi’s extremist followers.
Dejectedly, the targeted group experiencing this massive intimidation are the Muslims living in India. The resentment shown towards Muslims by Modi Sarkar has increased. What started off as the introduction of laws against sacrificing of cows and putting a ban over the consumption of beef in majority of the Indian States in 2014, has led to the intensification of enmity towards the Muslim community. Currently, innocent Muslims are facing attacks and violence on a daily basis. According to a report by Delna Abraham and Ojaswi Rao in IndiaSpend, “Muslims were the target of 51% of violence centred on bovine issues over nearly eight years (2010 to 2017) — and they comprised 84% of 25 Indians killed in 60 incidents. As many as 97% of these attacks were reported after Narendra Modi’s government came to power in May 2014.”
Modi’s approach is not fundamentally delegitimizing the rights of Muslims in India, however, his methods are leading to a situation where intolerance is surging against the Muslim community. Furthermore, the actions being taken in Indian Occupied Kashmir (IOK) are extremely unfortunate. Everyday scenarios depicting irrational policies and inhumane behaviour of Modi’s administration and Indian forces in IOK entrenches the act of oppression against Kashmiris that has continued since partition. Consequently, the widespread crackdowns, blinding of youth through pelleting, and massive bloodshed in the valley has further terrorised the common people. Modi’s nationalist agenda has resulted in alienation of the local youth, leaving them in a state of anger and helplessness.
Under such circumstances, the recent Pulwama attack on the Indian troops, killing more than 40 military personnel, can be understood as an act of retaliation. The Pulwama attack, which took place on February 14, 2019, involved a young suicide bomber who was a native of IOK. Primarily, Kashmiris protesting and raising guns against the establishment is due to the demand of the Kashmiri people for the right of self-determination but the ill treatment from Modi Sarkar in recent years has added fuel to the already raging fire. Unfortunately, the oppressed Kashmiris have no other way to resist the Indian brutality but pick up arms to fight for their right of self-determination.
The Indian government reacted by claiming that Pakistan was behind the perpetrators of the Pulwama attack. In addition, the Indian government took extensive measures, some considerably irrational, in disrupting the relations of the two neighbouring states, withdrawing the Most Favoured Nation (MFN) status for Pakistan. Furthermore, Indian forces have violated the Line of Control in the past month repeatedly and they have been targeting innocent civilians of Azad Kashmir. Modi Sarkar is playing a blame game and using Pakistan as a scapegoat for its own failures, thus, trying to assert that Pakistan is behind the attack in front of international community, when in reality the responsibility lies squarely on the performance of the BJP government. In addition, India is trying to blacklist Pakistan under Financial Action Task Force (FATF) manifesto — a global watchdog that monitors terror financing and money laundering — to isolate Pakistan globally. However, Pakistan retaliated as a sovereign nation and gave a befitting response to Indian aggression.
The implications of Modi’s actions have marginalised the Muslim community. Moreover, his narrative aspiring and urging religious hatred has unveiled the façade of secularism of India. His Hindu-centric nationalist approach is deepening the roots of irrationality and increasing intolerance in the community and he is trying to gain benefit from fashioning a self-serving rule to build a certain narrative to cater to the Hindu nationalists of his voter base, which can benefit him in the upcoming elections.
Therefore, it is of immense importance to recognize that the current far-right policies in India will only instigate hatred and violence. Unfortunately, in the wake of the Pulwama attack, the ideology of Muslim suppression has gained more momentum, especially against the Kashmiri Muslims. This has called for further trouble and widespread normalization of hate expression in India. Furthermore, operations have been carried out in the region of Pulwama targeting locals. If such conditions continue to prevail in the future, it will only escalate the situation. Moreover, it will minimize the possibility of a civilised co-existence among the many ethnicities residing in India and it will encompass an Indian identity which will not be anything short of extremist. In the long run, this will definitely give rise to conditions which will not be favourable for the South Asian region.HH