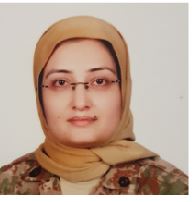 ”There is no tool for development more effective than the empowerment of women.”
— Kofi Annan, former UN Secretary General
Pakistan Army troops have remained a part of UN peacekeeping missions since 1960. From then on, they form part of both observer group as well as lightly armed military group. Pakistan Army is the third largest manpower contributor to UN peacekeeping and stabilising missions. Pakistani troops are deployed in 28 different countries. They have served for peacekeeping in 46 different missions of variable threat index and 157 sons of Pakistan laid their lives for the noble cause. The aim is to contain conflict parties while maintaining order in a particular area of influence. As with every plan of action, there comes an opportunity to make improvements over time with knowledge, experience and expertise. The mandate is the platform on which each UN peace operation is based and has underwent realistic alternative courses, which were tailored as per specificity of every area of conflict. From peacekeeping to peace stabilization, Pakistani troops have proven themselves as hardcore professionals and accomplished the level of execution for which the Pakistan Army is renowned worldwide. 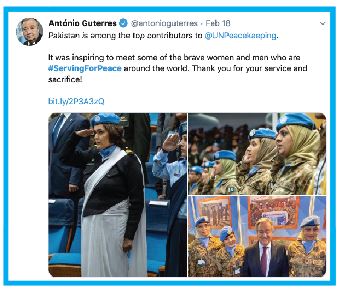 The year 2020, marks the 20th anniversary of UN Security Council Resolution (UNSCR) 1325, which ensures the rights, the voices, and the needs of women across the globe. Traditionally, women’s executive skills have always been under appreciated. They have been raised as to fit in the role of homemaking, child rearing and caregiving. This is nowhere more apparent than in Democratic Republic of the Congo (DRC). Women have to struggle very hard in order to secure a place in business, politics and economy, in a country like DRC that has faced armed conflict for decades. Women and children, being the soft targets, have faced physical victimization for ages. They have mostly been a tactical objective in formidable expression of power. Gender-specific violence has always been an easier way to demoralize the opponent and to achieve the ultimate satisfaction of leaving a long lasting impact. The cases of psychotic illnesses go undiagnosed in the violence stricken areas as the baseline statistics are usually not available for better comparison in a specific range of time. Pre-existing personality factors are capable of shaping collective archetypal image of a community that has faced violence, poverty and chronic malnutrition in their generations. The psychosocial impact of extreme experiences has a manifold risk of acquiring mood related disorders, suicidal ideation, post-traumatic stress disorder, concentration-camp syndrome, war neurosis, and survivor syndrome. There are illnesses of constant fatigue, malnutrition, memory related issues, lability of mood, and psychosomatic symptoms, which are not considered as a disability in cultural households, but these are cultivating grounds for long-term demoralisation and feelings of incompetence. 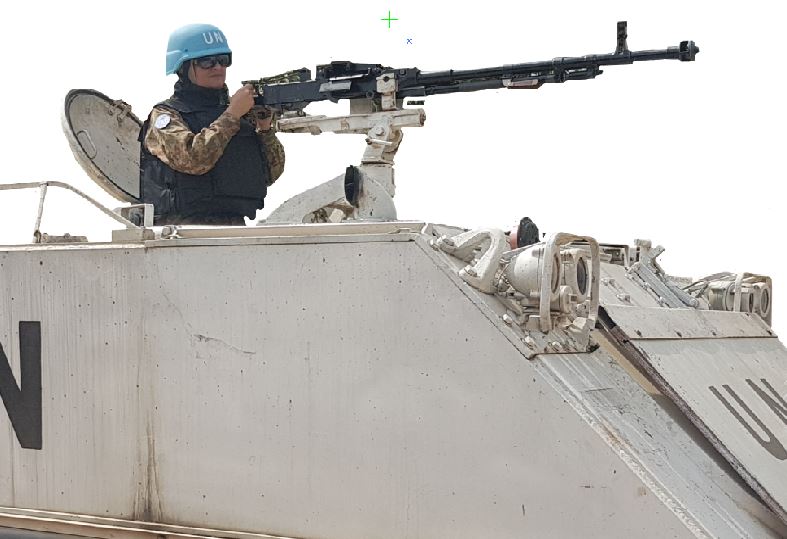 While recognising the equality and importance of gender in every walk of life, it is inevitable for a force to implement significant changes at community level where the population consists of more than 50% of women and children. Hence, the placement of Female Engagement Teams (FETs) in mission areas was carried out in 2019 to hold 15% of the troops’ strength. The responsibility of these teams ranges from offering emotional support to proffering basic skills for self-sufficiency. The aim of FET regime centres on the concept of assisting female segment by enlightening and empowering. FET consists of officers from varying professional cadres such as psychologists, medical and nursing officers, IT professionals, vocational training officers, legal, logistics, and operations officers. The composition of  the team depicts the wide array of community engagement and facilitation. FET has played a significant role as an agent of change in peacekeeping and efforts for peace building. 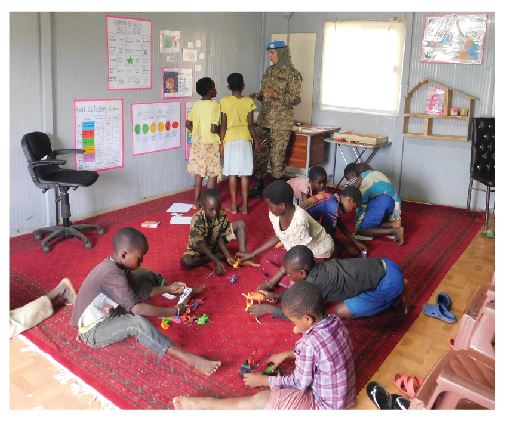 They actively participate, engage, protect, and educate the women in local community with the aim of empowering them in their own lives.
Being a part of FET as a stress counsellor, I would enunciate the psychological perspective in providing sustenance to the violence torn women and children. The psychologist officers of FET have espoused child protection as focal point in gender advisory and sexual exploitation cases. The compounding effect of fear, insecurity, trauma, and poverty in concentration camps explicitly calls for a need to counsel victims, to educate them, and to help them reintegrate. Stress counsellors formulate simplest healing modalities while keeping various factors in mind, be it cultural, social, or psychological. It takes quite some time to bring about a clinically significant therapeutic change but quick impact programs are also being incorporated to provide immediate relief. 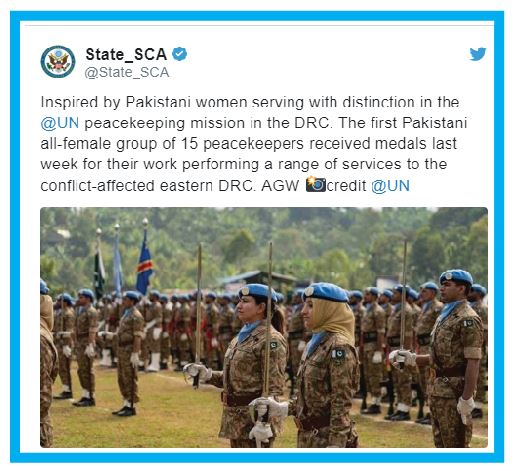 Pakistani FET has performed the tasks of training women out of the trauma of sexual exploitation and assault, holding awareness lectures, vocational training workshops, carrying out riot control and peace patrolling missions. They work in close coordination with the government, and semi-governmental and non-profit organizations’ in order to facilitate the women in their area of responsibility. They have successfully executed awareness modules upon basic healthcare, nutritional value, mental health, trauma support, endemic diseases, first-aid trainings, and childcare and rearing practices. English language and computer courses have also been incorporated for the benefit of the local women. Vocational trainings to create small scale self-help opportunities has proven to be another feather in the FET cap. They have effectively tried to break the discrimination plateau by setting their own example in the community and operational working.
The efforts of FET have been recognised at various international forums. Pakistan’s permanent envoy to UN, Maleeha Lodhi, has acknowledged that Pakistani women in UN peacekeeping missions have inscribed a significant mark in the history of peacekeeping by saying, “Proud of these female Peacekeepers from Pakistan deployed in United Nations Stabilization Mission in the Democratic Republic of Congo or Monusco.” United States chief diplomat for South Asian Affairs, Alice Wells has shared her inspiration in a tweet about Pakistani women who are serving in UN peacekeeping mission in DRC. United Nations Secretary General António Guterres, on his recent visit to Pakistan, appreciated Pakistan’s contribution towards UN peacekeeping rising above the discrimination of gender. 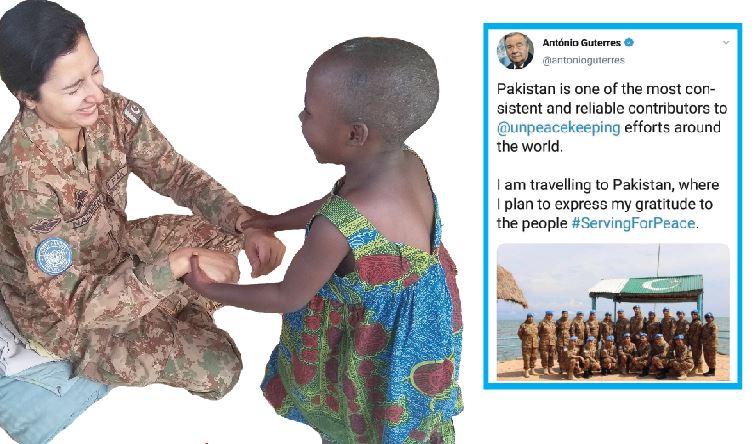 Pakistani FET sends out a message of equality, not only in terms of realising discrimination against a larger stratum of the society but also for stimulating gender parity in a realistic way. The feat of Pakistan Army in placing their lady officers in active field of influence augments this advocacy of two-pronged balance: gender equality and gender parity. It has ingratiatingly served to the advantage of the Congolese community at large and women in particular. Being a woman myself, I feel my contribution towards UN peacekeeping and Pakistan Army, is never-ending and ever-enduring for the women and peace of DRC. HH