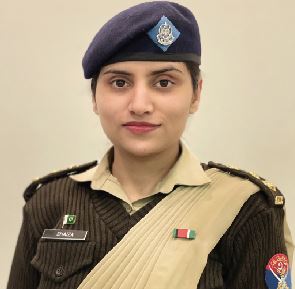 Females roaming around in white muftis looking all fresh and happy, filled with immense enthusiasm and ambition to make their mark in the academy, has been a regular feature at (PMA)since November 2006. I was privileged to be the part of the latest batch. Just like each Lady Cadet Course (LCC), my time at PMA also commenced with me like everyone else busy enjoying with family the last moments before we parted ways for the next few months. I remember my family standing beside the coach waving hands and bidding me farewell when the sergeant came and told my family that it was time for me to leave, as I walked away, their eyes shining with pride and love. 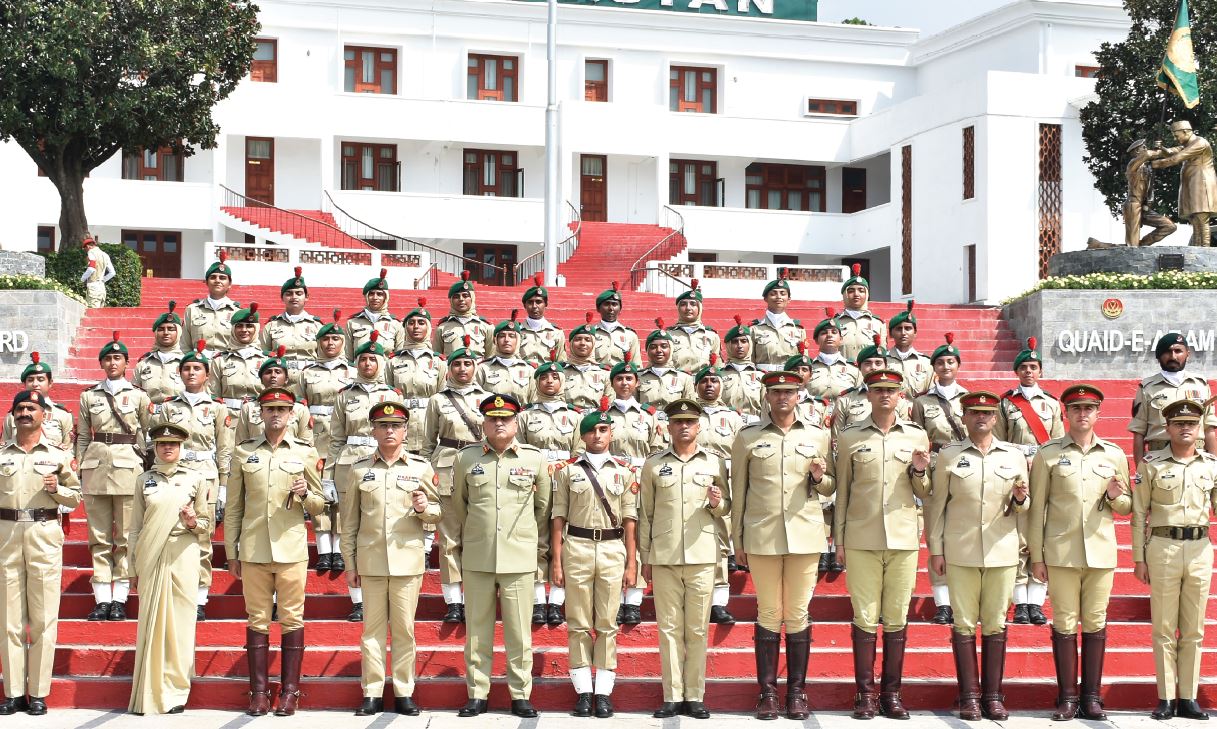 We were all over the moon until we entered the Quaid Gate and the Sergeant said: “Ladies, the fun time is over.” The first few weeks were indeed the toughest and days felt like years. Not getting enough sleep, every inch of the body aching, especially the legs, due to the miles exercise that the most of us were not used to, doubling up to the  Hall of 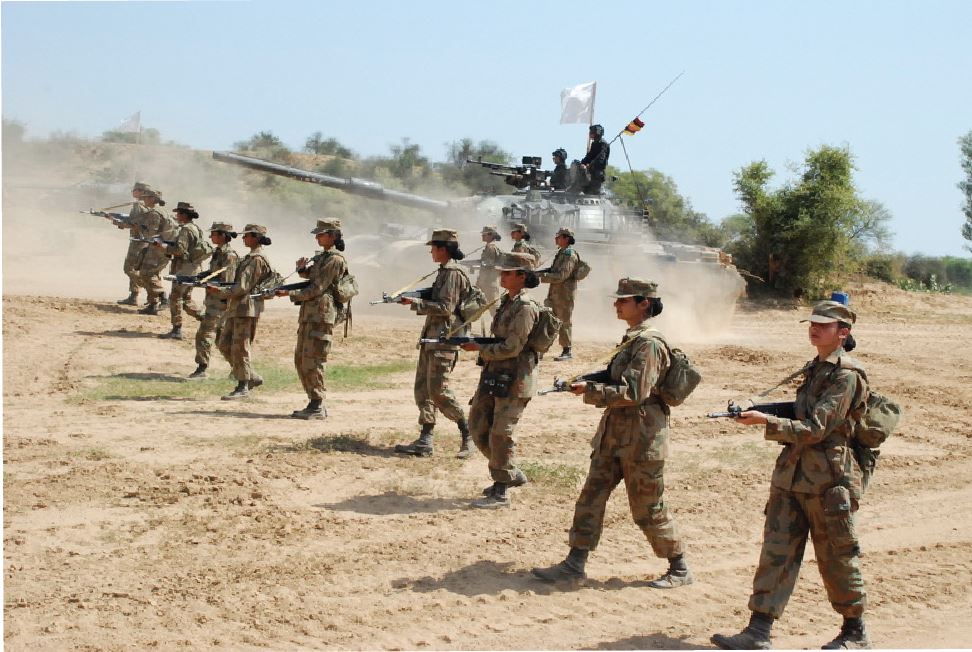 Study (HS), attending classes with sleepy eyes and mostly getting checked by the Platoon Commander, spending most of our time doing punishments, doing PT twice and on designated days thrice a day, was what we experienced during our initial days at PMA. Not that the rest of our time there was any different, it was just that we got used to the rigorous physical activities within the first few weeks.
There is one thing that I have come to tell everyone that you get to do things at PMA that one never imagined doing in one’s life otherwise, like firing. I remember being a little bit scared of firing, little did I know that it would turn out to be one of my most favorite activities. I was the best shooter of my course. Though, I did not get to be 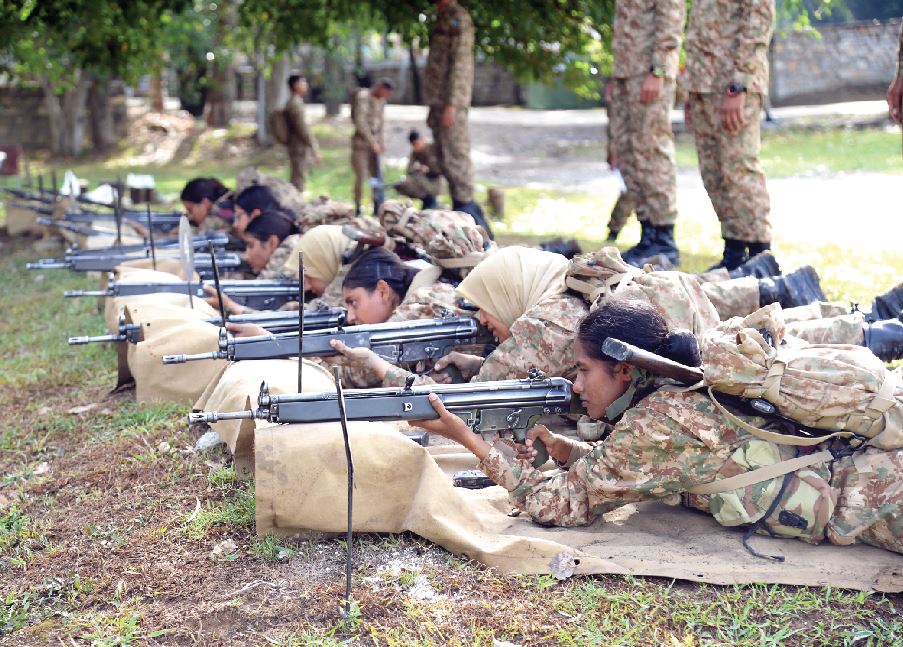 the best of the academy, it is nothing less than an honor to be the only lady standing amongst the four, who had hit all the four plates. There’s also the assault course, which included a number of obstacles that had to be overcome within a given time that made it a thrilling experience.
We were not allowed to make any contact with our families during the first month and it was in the fifth week that we were allowed to write letters to them. I remember writing the letter in bits, since we did not have enough time to write it all in the limited time. It was after the saluting test and a week before midterm (for which we used to count the days) that we were given a family retrouver (RV). I had shed a good number of kilos, become quite tanned and was generally not recognizable; my sister somehow managed to recognize me and that was how my parents came to know that the slim, tanned and alien-looking girl in front of them was theirs. I poured my eyes out when I met my parents. My father could not hold his tears for he never thought that his daughter would undergo such a drastic change.
After a week, we went home and the eight days went by in the blink of an eye. When we returned, we all missed our families a little too much, but it took us only one Operation Theatre (OT) session to get back on track. I met with an unfortunate issue right after my midterm break; I suffered a very painful (more psychologically than physically) rib fracture. I realized then that you actually enjoy the exercises with your course mates and I was missing out on a lot.

The days went by, we had our final PT tests and papers and we were off for Qiyadat – the final exercise of the course. The twelve-days long exercise featured living out in the field with almost no facility, eating from the haversacks, digging trenches all day long and sleeping in camps at night. It rained heavily one night and our tents were filled with water. With camp constantly dripping, we slept drenched in water, but we slept! I feel like the takeaway from Qiyadat was that it helped us to become stronger versions of ourselves by discovering our strengths and what we are capable of.

Our training ended with the tiresome drill days for the Passing Out Parade. Drilling under the scorching sun, our already darkened complexions kept getting darker, heels hurt because of relentless marching, arms ached as a result of swinging and holding the rifles as we perfected and synchronized for the final day. However, the joy of passing out made us forget about it all. We marched in with full might and pride on the passing out day. The most unforgettable moment was the slow march, climbing the red stairs that we could only dream of during the initial days, feet thudding on the slow drum beat with the compere narrating an emotional poem that goes something like this:

It was indeed an emotional moment for us all as we had spent a good amount of time with each other over the last few months. We were there by each other’s side through the thick and thin and were now parting ways. One thing, I will forever be grateful for is the bond that I made with my course mates. When you go through tough times, doing things you have never done in your life before, living away from your family with almost no contact at first, you develop a deep bond with those around you. We spent each and every second of those months together, watching each other experience rigorous pain, lows and highs, we consoled each other numerous times, it all helped us gain that priceless deep bond that most of the people crave for in their entire lives. HH