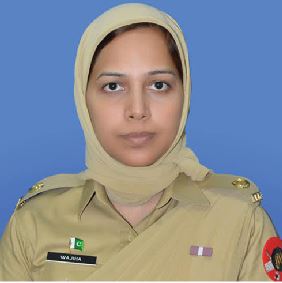 Reading an article in The New York Times last month brought to my attention the new resolution passed by the United Nations Security Council (UNSC). The UNSC unanimously adopted a resolution on August 28, 2020, calling on the UN and its member nations to step up action to increase the number of women in military and civilian positions at all levels in the UN’s peacekeeping operations. The resolution recognizes, “the indispensable role of women in increasing the overall performance and effectiveness of peacekeeping operations,” stressing that a better balance between men and women contributes to “greater credibility” of the UN missions among the people they are mandated to protect. Pakistan Armed Forces have already stepped up deployment of female officers on missions across the globe. The first ever Pakistani Female Engagement Team (FET) received UN medals for serving in the peacekeeping mission in the Democratic Republic of the Congo (MONUSCO) in February 2020. A team of 15 Pakistani female officers, on January 31, 2020, received major recognition for being the first all-female group from Pakistan to serve in a UN peacekeeping mission. 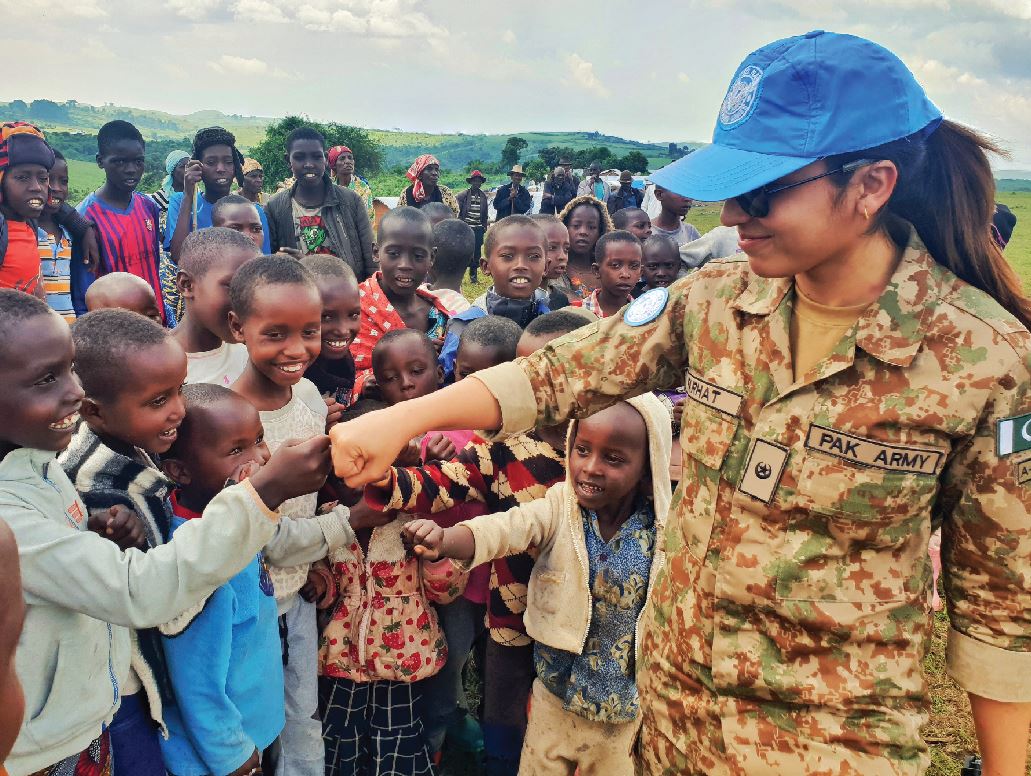 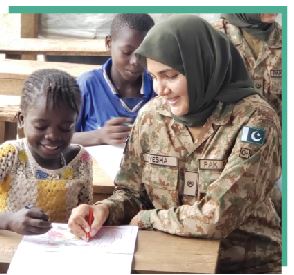 October 2020 marks the 20th anniversary for the adoption of UNSC Resolution 1325 on Women, Peace and Security (WPS) and the 75th anniversary of the UN. Resolution 1325 underscores the important role of women in the prevention and resolution of conflicts and calls for their equal participation in peace building.
My conversation with different female Pakistani officers serving at various UN missions captivated my attention; their efforts and expertise in increasing the effective participation of women in peacemaking and conflict prevention efforts are of immense importance. One can name a field and find our female officers working on site, ranging from FETs to IT, from media to Public Relations, from legal advisors to Medical Officers (MOs), from Operations Officers to planning, and many other. Pakistan Armed Forces are indeed keeping well with the UNSC’s call, made in 2015, for doubling the number of women in uniformed peace operations by 2028. We get to see many images and read about our own officers in UN missions; the purpose here is to explore the distinctive spheres our female peacekeepers from Pakistan Army are working in.
This first Pakistani FET was deployed in South Kivu, in MONUSCO in June 2019. The team consisted of psychologists, stress counselors, vocational training officers, gender advisors, doctors, nurses, operations officers, information officers and logistics officers. Seventeen additional Pakistani female officers joined MONUSCO in February 2020. 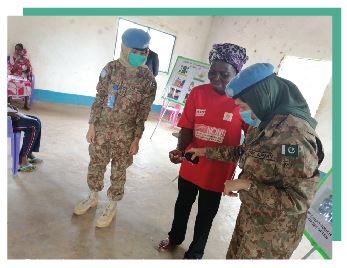 “I believe when a female peacekeeper gets into the field, she shows strength, brings courage and gives hope to the neediest and neglected segments of the society,” says Maj Fatima Shaukat, deployed as the team leader of first ever FET in United Nations Multidimensional Integrated Stabilization Mission in The Central African Republic (MINUSCA). She explained the main role of her team — community outreach and engagement. As a team leader, her task is to plan and conduct all the activities with the local community. She appreciates the work being done by male peacekeepers; however, she highlighted the inherent limitations of their engagement while reaching out to women and children of the local population in the past. Now, according to her, with her team’s presence, “For the local community in Central African Republic (CAR), infantry battalion becomes more approachable and accessible when they see us patrolling and engaged in civil-military activities and making a meaningful impact at all levels.” Our female peacekeepers serve as powerful mentors and role models for women and girls in post-conflict settings in the host community, setting examples for them to advocate for their own rights and pursue non-traditional careers.

Maj Ayesha Sharafat who is the Vocational Training Officer of FET at Kagabandoro explains, “The social and cultural barrier that the male peacekeepers experience in communicating with local women will be effectively bridged by female peace keepers by providing sense of security in order to foster their trust and win their hearts and minds. In the process firsthand information can also be collected for effective peacekeeping.”
FETs are contributing enthusiastically to the core issues at community level. On an emotional front, I am mesmerized to see the images of our female officers who are serving far away from their own families and children, wholeheartedly working  closely with communities across the globe. 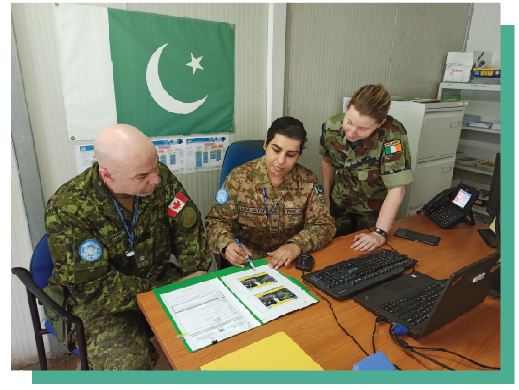 Maj Tanzeela Mobeen from MINUSCA was about shared her feelings being a stress counselor/psychologist in the FET. She says, “Female peacekeepers can access the locals by generating critical information like interviewing and supporting survivors of sexual assault or gender-based violence. Moreover, female peacekeepers, especially female stress counselors can build trust and confidence with local communities where women are prohibited from speaking to men.” In post-conflict settings, Pakistani female peacekeepers serve as powerful mentors or role models for the local women by setting example for them to raise voice for their rights and pursue non-conventional careers. 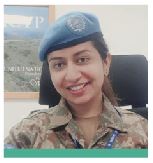 Maj Maryum Rana, Force Signal Officer from UN Peacekeeping Force in Cyprus, is responsible for provision of IT and communication services to the mission. She explains her work, “Female Peacekeepers are performing their duties, shoulder to shoulder with male soldiers, thus making them an essential part of peacekeeping efforts. Moreover, the concept of gender equality is truly implemented and manifested in the mission.”
This year, UN Peacekeepers are facing one of their greatest challenges — COVID-19. Peacekeepers are assisting governments and local communities in response to the pandemic and continuing to adapt their activities to execute their mandates, including protecting vulnerable communities. Female peacekeepers are on the frontline in this fight and are an integral part of the COVID-19 response team as well as in implementing mission mandates, within current constraints while taking all precautionary measures. COVID-19 has brought along challenges and reshaped the working environment highlighting the importance of perception management in the peacekeepers and female officers specifically those who are doing wonders in the field of media. The new environment has increased reliance on technology-based interaction and working. 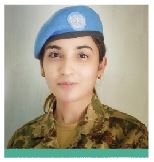 Maj Farhat Hasan, employed as Military Public Information Officer (MPIO) with Headquarters Southern Sector in MONUSCO, uses modern media and perception management to identify how the mission is being perceived domestically and internationally. Her job entails emphasizing the role of these perceptions as a basis for evaluating and improving these operations, thereby contributing towards effective perception management as per mission mandate. She says, “Public perception becomes crucial through effective media management to portray a positive image of UN peacekeepers internationally.”
In addition to their role in the field, our female officers are working at key appointments in Mission as Staff Officers. 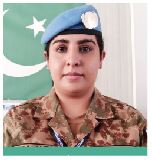 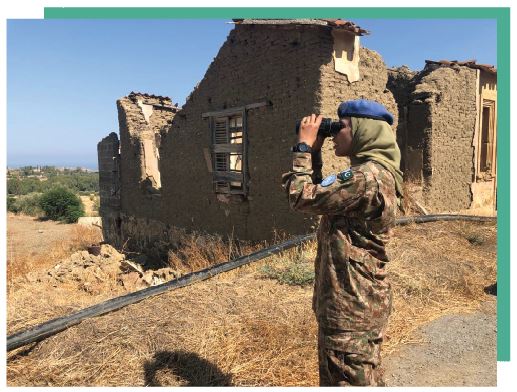 Maj Rabia Altaf Malik, deployed as Deputy Chief Information Operations Cell at Force Headquarters MONUSCO, plans, coordinates and directs all sectors regarding information operations campaigns. She says, “You need commitment, moral and physical courage and un-fatigable mental robustness to pursue your esteemed goals. As a woman serving beyond national borders for my country, I always encourage womenfolk in uniform to participate in the noble peacekeeping missions.” 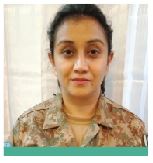 Maj Nadia Bashir is working as Deputy Force Legal Advisor, Force Headquarters (FHQ) United Nations Mission in South Sudan (UNMISS). The main role assigned to her is to assist the Force Commander on all legal issues including existing agreements, UN’s policies, privileges, and immunities. She says, “Female peacekeepers are playing an effective role by gathering information regarding violations of human rights and cases of violence against local women and children, in the outbreak of civil war, in order to bring the culprits to justice and protect the civilians.” 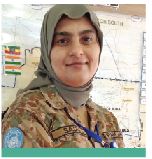 My interactions with female officers across missions brought to my knowledge another unique field in UN Missions. Maj Sadia Sarwar, who is appointed as a Watch-keeper, in southern sector of UNMISS, is responsible to compile all operational activities in her area of responsibility. She is to report any incident, emergency, and get required information from the under-command units and forward it to the headquarters. She says, “Watch-keeper means to stay awake the whole night to monitor all the operational activities. I am a bridge between field units, sector and the Force Headquarters. Being a military officer, I must be quick and responsive enough to handle any unforeseen situations and keep all the stakeholders abreast of ongoing situations and getting all the news.”
The UN Action for Peacekeeping (A4P) initiative views the Women, Peace and Security (WPS) agenda as critical to enhancing peacekeeping operations’ performance through supporting women’s participation in peace processes and making peacekeeping more gender-responsive and inclusive by increasing the number of civilian and uniformed women in peacekeeping at all levels and in key positions. More women in peacekeeping mean more effective peacekeeping. Women peacekeepers improve overall peacekeeping performance, have greater access to communities, help in promoting human rights and the protection of civilians, and encourage women to become a meaningful part of peace and political processes.  Pakistani female peacekeepers are helping in this regard to their fullest by becoming role models and source of motivation for women of every host nation where females are deprived of their basic rights and who do not have opportunities to get education and participate in the development of their country. Pakistan Army is valued as one of the Top troop contributing countries adding tremendously in UN Peacekeeping missions and now taking the bar much higher by increased induction of females in Armed Forces and their deployment globally in UN peacekeeping missions in distinct professional roles.
I personally feel proud to be a part of the force and encourage women from our society to step up having been provided equal opportunities to represent Pakistan wearing blue berets. The road to Women, Peace and Security comes with inherent challenges, where our sisters in arms are moving ahead with pride and paving way for our young girls to follow in the future. HH