Discovering the Medieval Baltit Fort – An Odyssey into the Unknown

Back in 2017, when I planned a trip to Gilgit-Baltistan, something my heart had been set on for a very long time, I expected to be surrounded by rugged, precipitous mountains with rivers flowing between them, lush meadows carpeted with wild flowers as far as eyes could see, and breath-taking turquoise lakes, apricot trees that lined the roads, in addition to beautiful and hospitable people. I love mountains and nature so I expected my visit to be an amazing adventure; however, I did not think that it would turn out to be one of the most memorable road trips that I have ever been on. I ended up exploring a side of the region that, frankly, I had no idea existed – centuries old heritage. Yes, I am talking about the Baltit and Altit forts in Karimabad, Hunza along with the ancient Silk Road that has been preserved to be experienced by visitors to the region. For someone who considers herself a history buff, getting to know about the history of the area by visiting these forts, particularly the Baltit Fort, was the highlight of my visit. 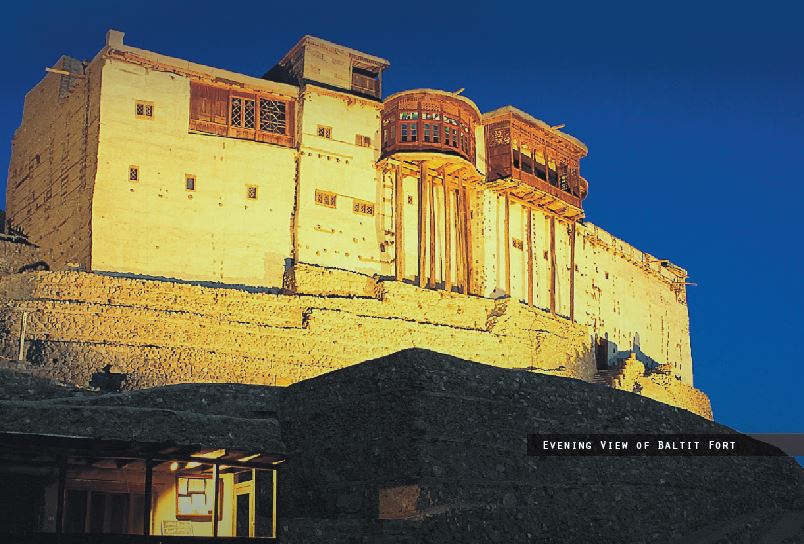 Something I am guilty of not doing while travelling is to do research about tourist attractions that I can visit. I know most people think that making a detailed itinerary is important as it saves time and ensures that you do not miss out on anything, but for me discovery is part of the charm. Although Hunza (and Karimabad, since I was told that’s the place to visit when in Hunza) was on my rudimentary itinerary, I expected only to experience the natural beauty of the place. I could not have been more wrong! When I reached Karimabad, everywhere I looked were small souvenir shops selling traditional jewellery and artefacts, small cafés, and elderly locals who lounged outside their homes and shops that lined the cobbled street that I was strolling on. I got to experience what is truly a tourist’s treat: local culture and lifestyle on display.

This was definitely not all; as I continued my ascent up the steep path, I saw a signboard that read ‘Baltit Fort’. I thought it probably was a fort/check post established by the British during their rule. Even though the ascent was quite tiring, this was interesting enough for me to make the journey further uphill. Passing by a beautiful café, that I later discovered was set up inside the Fort’s premises, I turned a corner and found myself standing at the foot of a most stunning and imposing structure – the Baltit Fort, one of the many ancient forts that spatter the region, albeit one of the most beautiful ones. And just like that, I felt like I had been transported back in time.
Baltit Fort was preceded by Altit Fort as the seat of power. Altit Fort that is believed to be 1100 years old was originally home to the Mirs (rulers), also known as Thum, of the Hunza state. It is said that a dispute arose between two brothers of the royal family, Prince Shah Abbas (Shάboos) and Prince Ali Khan (Aliqhάn), which resulted in the construction of Baltit Fort by Shάboos, who made it the capital seat of Hunza. Aliqhάn eventually died as a result of the power struggle and so Baltit became the prime seat of power and continued to be so until 1945, after which, the Amir of Hunza took up residence in a beautiful granite palace in Karimabad. In 1990, the son of the last ruler of Hunza formally handed over the Fort to the Baltit Heritage Trust, after which restoration work began that was completed in 1996. Built in 14th century, Baltit Fort has also found its place on UNESCO World Heritage Site list.
The rectangular stronghold situated at the foot of the Ulter Glacier provides a sweeping vista of the Hunza Valley. The Fort overlooks the settlements it was built to protect. While it has lost its defensive role, the Fort remains a symbol of the region's history and culture. It represents the architecture, domestic lifestyle, and belief systems of the region, providing insight into the history and culture of the Hunza people. It has weathered many invasions and underwent many renovations and expansions over the centuries. In the 16th century it underwent a facelift when the Thum Ayasho II, married a Balti princess Shah Khatoon (Sha Qhatun). Sha Qhatun brought master Balti craftsmen who renovated the fort as part of her dowry. During the Moghul era, Baltistan was called Tibet Khurd (Little Tibet) and had a very strong cultural and ethnical relations with Ladakh to the east, hence, the renovations bear a deep Ladakhi/Tibetan architectural influence. The current structure shows some resemblance to the Potala Palace in Lhasa with a few rooms on the third floor added in the British colonial style during the Raj.
The Fort is a wood and stone structure with mud plaster. It is a three-storey building, with granaries and some stores in the basement on a glacier moraine hill with man-made narrow terraces for the stability of its ancient foundations. The Fort boasts a well-ordered room arrangement; rooms were added for new functions over time. On the ground floor, the oldest rooms such as the queen's apartments, the storage rooms, prison, and kitchen reveal a traditional way of life. The additional rooms on the first and second floors of a larger size with better lighting and more facilities provided more comfortable living for the royal family. The first floor is like an open hall on all four sides. The second floor has an audience hall, guest room, dining hall, kitchen, and servant quarters. The rooms on these floors were mostly used in summer and are considered the finest rooms in the Fort. In winter, the inhabitants retired below to the darker but warmer rooms. In the 19th century, the west façade was modified to improve the external military appearance of the fort and provide, within the wall structure, special guardrooms for security 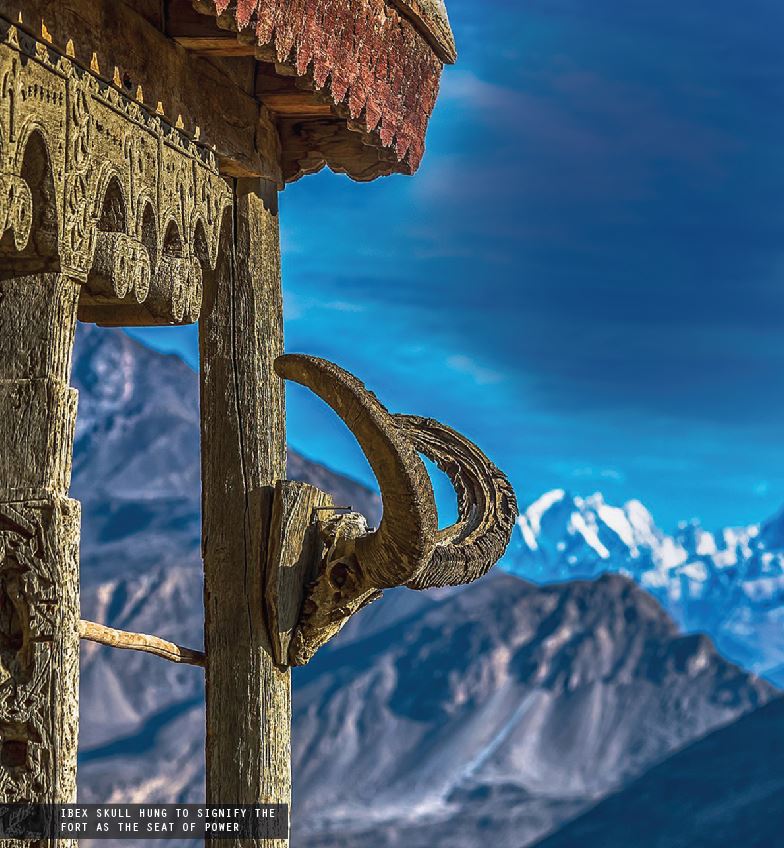 around the only access door. At the beginning of the 20th century, the building was modernized and its defensive role modified with the addition of wooden verandas, reception areas and guestrooms, all constructed to take advantage of the spectacular scenery. The top floor of the vernacular Fort that featured a summer dining room, audience chamber, bedroom, and reception hall was refurbished to transform it into a palace with many features of British colonial architecture. Some second floor rooms were also modified for the Mir's private use, with the installation of fireplaces and western furniture, and the use of wallpapers, curtains and cement renders. The remodelling also included the introduction of a semi-round royal dais, mud-block walls, coloured glass windows, a Tibetan-style lantern, wood-planked and decorated ceilings, and wall mounted fireplaces. During these renovations, one major four-story tower was demolished at the north end of the Fort, as witnessed by a blocked doorway in the present north façade.
The fort has large wooden windows, porches and galleries, the wooden carvings on which are testament to the tastes of successive Mirs and the art of the architects. All 53 rooms of the Fort offer breath-taking views of the Hunza Valley and one of the world's highest peaks, Raka Poshi. When moonlight falls on the snow-capped peaks and valleys of Raka Poshi on the 14th night, a mesmerizing enchantment sets in that bewitches the visitors. The second floor features an impressive open terrace with a royal throne under a beautiful wooden canopy, living rooms, bay windows with balconies and breath-taking views. Outside the Fort is displayed a cannon that was commissioned by Mir Ghazan I in mid-19th century during the arms race with the state of Nagar.
After the restoration of Baltit Fort in 1996, in which the highest priority was to retain the historic character and appearance of the Fort, it was opened as a museum for public. The fort remains open year round with throngs of people visiting it every year, which includes locals, domestic and foreign visitors. HH