She keeps waiting for her son’s phone call. She is unaware that he is no more. She has already lost her husband in war. The horrifying sounds of bullets being fired echo throughout the day. The communication blackout has left her in social isolation. Frequent nightmares characterize her nights. She weeps amidst the curfew where the increased military presence makes her apprehensive about the future.” This is just the gist of the countless stories of the often-overlooked Kashmiri women at the heart of the Kashmir Conflict, which has always been considered highly political in nature. 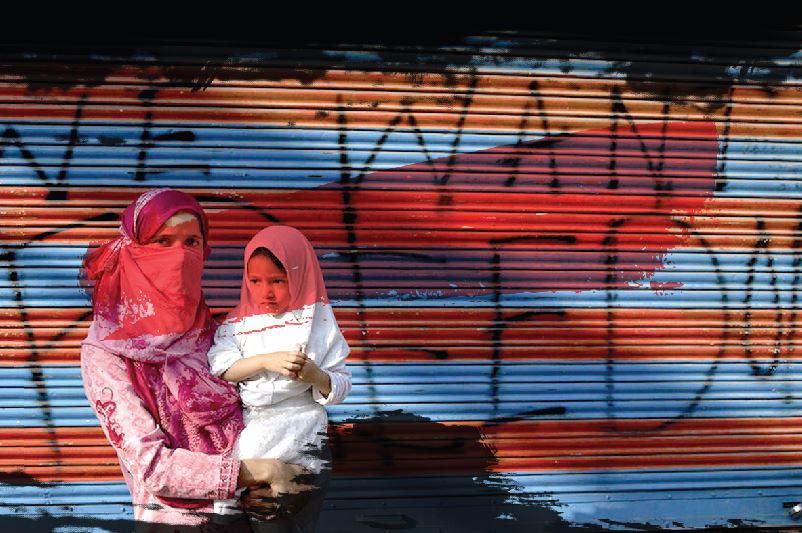 For many the Kashmir Conflict is territorial, and the truth is that it has historically been more of a political issue revolving around national and international negotiations and policymaking. In contemporary times, we do understand the need to address the human issues and find a concrete 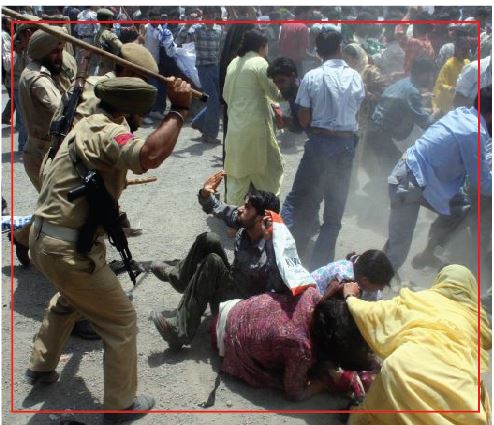 solution to the problem due to the rising stressful situation in Indian Illegally Occupied Jammu & Kashmir (IIOJK). Normalizing a lifestyle characterized by suffering, sacrifice and suveillance heavily influences the physical, psychological and social wellbeing of Kashmiris. The perpetual state of uncertainty and fear takes a heavy toll across all ages and genders.
However, the available research database on mental health status of Kashmiris shows a distinct gender skew; significantly, more women are affected on a psychological level with increased morbidity and poor quality of life. United Nations (UN) in its various reports has also stated time and again that due to vulnerability and subjugation, women and children in conflict areas carry a disproportionate burden. Most commonly reported mental health disorders in war-torn areas include depression, anxiety, insomnia, post-traumatic stress disorder, deliberate self-harm and suicidal attempts. Kashmiri women commonly report intrusive flashbacks of traumatic experiences, intense autonomic arousal and an incapacitating loss of motivation. These traumatized mothers appear to struggle with parenting demands, especially in the absence of paternal presence at home. This may potentially have a profound impact on the emotional maturity and wellbeing of a whole generation of children raised by mothers suffering from gross mental health issues.

Due to heavy military presence, frequent raids, and lack of access to justice system, Kashmiri women face ‘sexual terrorism’ where there is an exaggerated fear of being victims of sexual violence and rape. On the political front, the talk of freedom to marry ‘white-skinned’ Kashmiri women reflects the acceptability of misogyny and objectification of women, which furthers their sense of fear. This systemic gender-based violence is often deployed as weapon of war.

War related traumatic experiences include loss of family members, separation, displacement, sexual violence, witnessing death and rape, destruction and violent acts, extreme poverty and starvation to name a few. Due to the ongoing conflict, the constant threat and repetitive nature of such incidents, the uncertainties for future perspectives heavily strains the natural coping mechanisms of Kashmiri women. In times of distress, a strong social support network ensures that individuals cope well with stressful situation. With majority of Kashmiri women losing their significant others, there is inadequacy of a strong social support system. In the normal course of events, giving an individual ample time for closure after an incident paves way for a healthy coping mechanism. However, for Kashmiri women, the rising incidents of missing persons along with uncertainties do not allow for a closure. This unresolved grief and suffering adds to ailing mental health. 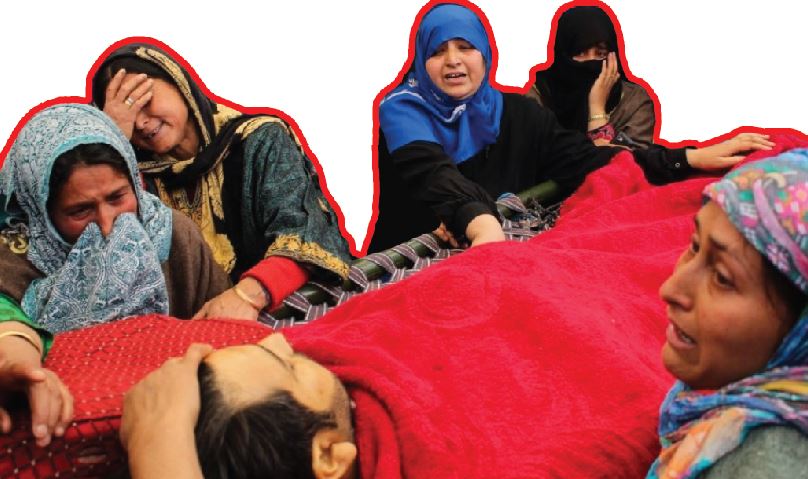 The persistent psychological issues faced by Kashmiri women lead to subsequent physical health problems, such as diabetes, cardiac problems and hypertension. However, the stigma with mental health issues, their disclosure and ill-access to psychological help restricts Kashmiris to get the help they need. With inadequate facilities and resources, we can only imagine the insufficient understanding and ignorant attitude towards mental health issues and their treatment in Kashmir. A lot of these undiagnosed or misdiagnosed mental health cases then pave way for overall diminished quality of life.
Since the very beginning, the Kashmir Conflict has brought with it episodes of rampant sexual abuse. Due to heavy military presence, frequent raids, and lack of access to justice system, Kashmiri women face ‘sexual terrorism’ where there is an exaggerated fear of being victims of sexual violence and rape. On the political front, the talk of freedom to marry ‘white-skinned’ Kashmiri women reflects the acceptability of misogyny and objectification of women, which furthers their sense of fear. This systemic gender-based violence is often deployed as weapon of war. According to the human rights narrative, rape and abduction have been used in conflict situations as a counter-insurgency tactic, where, in numerous cases, men are killed or evicted before their women are raped. It is believed that rape is not merely an isolated incident but rather, forces are actively employed to humiliate and frighten the Kashmiri population. This has been widely researched and discussed on various platforms around the world. In Kashmir every day brings a fresh wave of such cases and no female, be it child, young or old, is safe from the sexual terrorism of the occupying forces. The unimaginable trauma and subsequent mental health issues that arise from it are exacerbated by a lack of access to psychological help. The repercussions of this are felt in all aspects of the lives of not only the victims but their whole family and even community. 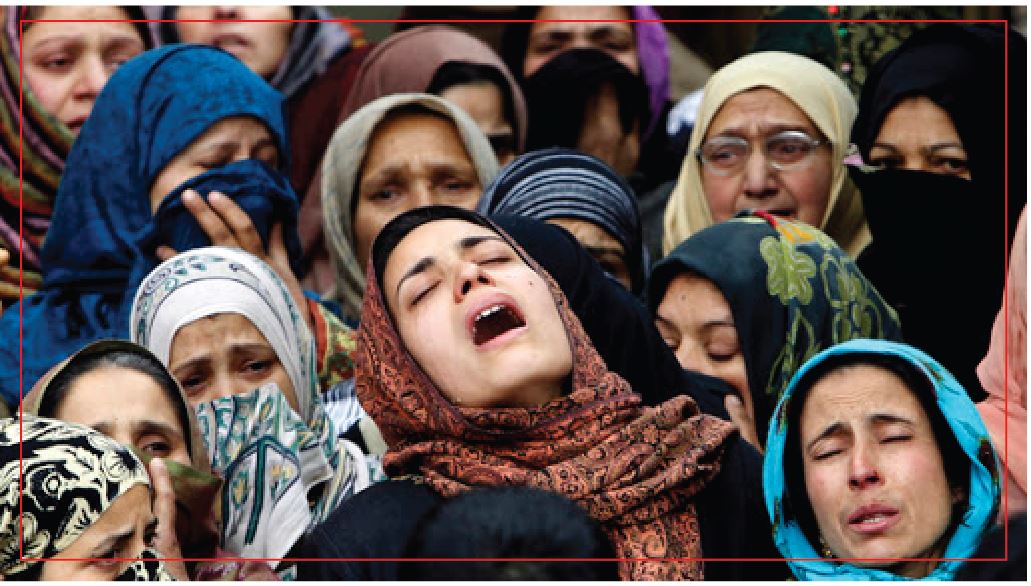 The notion of family togetherness and home as a safe place ruptures during a conflict. Family, as a basic unit, loses its functionality in conflict areas. ‘Half-widows’ is a term given to Kashmiri women whose husbands are missing due to the ongoing conflict because they are unaware of their whereabouts or even if they are alive or dead. For some women, it may be a recent occurrence but for others, it has been decades that their husbands went missing. Most of the half-widows live an impoverished life because they also lose an earning member of the family when their men are picked up by the Indian forces. The socio-economic status of these women drastically shifts. They may resort to family and in-laws for financial assistance but witness an undetermined status with regards to their property and inheritance rights. Furthermore, many times, due to societal and religious norms, these women do not have the option to re-marry and therefore, remain stuck in this category for an indefinite time. The dilemma of ‘what if the husband returns’ bars women to seek potential marriage and settlement arrangements. Not just husbands, but Kashmiri women also have to witness their sons and brothers being picked up even for hints of suspicion of their involvement in ‘malicious’ activities. There are scores of mothers who have to protect their children and sometimes lie to the young ones about the status of their elders. Adding to their misery, these women have to bear the public stigma and are associated with missing persons who are accused of joining the ‘other side’ or have ‘malicious’ intent. These women muster up the courage to search for their missing family members, running from police stations to district courts to jails to holding rallies, but their please remian unheard. The helplessness in trying to navigate through the tiring justice system to seek legal aid is an unending ordeal.
The pandemic has had a differential impact on individuals based on their gender, age, locality, etc. Therefore, women in conflict is a category of intersectionality that we must explore separately and debate as the Kashmir Conflict combined with the ongoing pandemic tends to exacerbate the pre-existing conditions.
The world has recently started to experience, what Kashmiris have been facing since time immemorial as they feel the repercussions of lockdown measures. We understand now how mobility restrictions and subsequent inaccessibility to essential facilities like food, education and healthcare affect us today. The social isolation, increasing frequency in deaths of loved ones and helplessness that we experience in this time of pandemic helps us understand the lives of Kashmiris. Kashmiri women navigate through lack of access to basic facilities and specifically sexual and reproductive healthcare like family planning services, maternal and child health. In winters especially, the usual news headlines reveal how pregnant women have had to seek external facilitation to escort them via stretcher to the nearest hospital miles away. Where evidence-based researches post that presence of birth companions and empowerment of new mothers in decision making related to their bodies during pregnancy have a long lasting effect on mothers and children, the lack of it for Kashmiri women highlights the gravity of the issue.
The experiences lived by Kashmiri women have been highlighted by Freny Manecksha in her book Behold, I Shine: Narratives of Kashmir’s Women and Children: “They would ask us where the militants were holed up, vandalise the kitchen, turn storage bins and jars upside down, smash utensils and leave a trail of strewn spices and grains behind them …”
Kashmiri women are widows who have lost husbands, fathers, brothers and sons. Kashmiri women are orphaned due to loss of parents. But Kashmiri women are also strong and resilient, they are active participants in the resistance, as reflected in their presence during demonstrations. This normalization of suffering and portrayal of women as emotional victims is also exhibited in the media images and this needs to be reviewed to allow for hope to flourish in IIOJK. HH