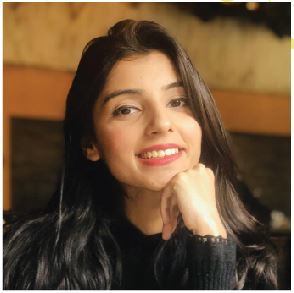 How Can Zero Waste Lifestyle Stop Our Glaciers from Melting

“Climate change is happening, humans are causing it, and I think this is perhaps the most serious environmental issue facing us.”
–  Bill Nye

Climate change is more than just a mere term. This term and what we choose to do regarding it will determine our future. So, have you ever thought about how the weather has changed since you were a child, and what has caused it? If you have, then the answer is that all these changes have been caused directly by climate change and global warming thanks to the ever-increasing environmental pollution that we humans are responsible for. The waste we generate directly through our consumption or indirectly in the form of toxic waste that the factories producing our “needs” release into the environment, is wreaking havoc in our environment, global warming being one of the many adverse effects.
According to a study in 2020, the global mean sea level has risen about 8-9 inches over the last century and almost a third of that has been in last two and a half decades alone. If sea level rise continues at this pace, entire countries, such as Bangladesh, could be underwater by the end of century. This is due to the melting of ice caps because of increased global temperatures. Climate change and the resulting melting of glaciers is happening at a rapid pace and what once was considered to be permanent ice has decreased in volume almost everywhere around the globe.
Due to climate change, not only the planet’s glaciers are disappearing but they are also affecting the landscapes and in the long term, it will have an impact on the oceans and life on Earth. Glaciers act as a protective layer over our Earth and its oceans. These white masses reflect the excess heat back into the space to maintain the Earth’s temperature. Glaciers also provide a scientific record of how the climate has changed over the past several years. About 10% of the planet’s land area is covered with glacial ice. 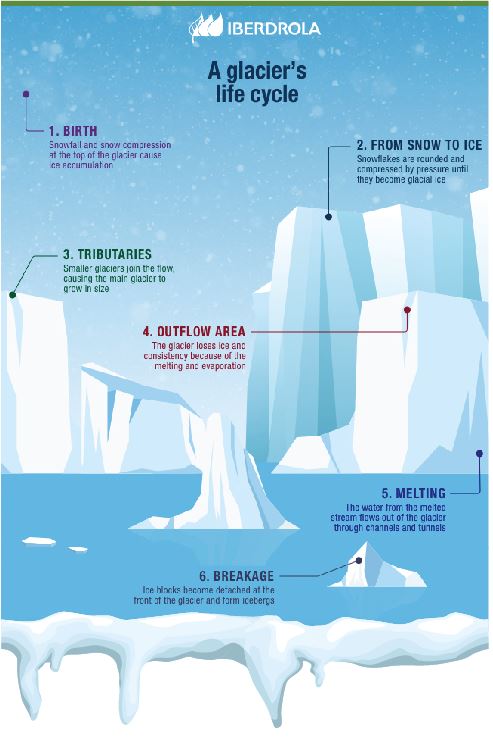 Since the early 1900s, glaciers around the world have been melting at a much rapid pace than ever before as a result of human activities, having its roots in the Industrial Revolution, which led to carbon dioxide and other greenhouse gases emissions. These gases are also released through other human activities like deforestation, land use, and burning of fossil fuels in addition to natural processes. These emissions have raised temperatures even higher in the poles, which in turn cause the glaciers to melt rapidly, calving off into the sea and retreating on land.
The Intergovernmental Panel on Climate Change (IPCC) has stated that before this century ends the mean temperature of the Earth may rise by up to 5.8 degrees. This increase in temperature can cause severe impact on ecosystems, water level, crop production, etc. Furthermore, this will affect the tropical area, which includes Pakistan, majorly.
Pakistan is the second largest country in South Asia. The climate here ranges from mild winters to dry and hot summers. The country is surrounded by different mountain ranges that boast many glaciers that contribute water for its many rivers providing water for most of the irrigation and production of electricity in the country. Climate change is a great threat to Pakistan as it exposes it to risks of glacial retreat, rising sea level, and increase in temperature, which can lead to frequent floods and droughts.
According to some studies, 22.8 % area of Pakistan and 49.6% of its population is at risk due to the severe impacts of climate change. Pakistan is more likely to suffer from the drastic impact of climate change because of its reliance on natural resources for livelihood. Agriculture is the lifeline of Pakistan’s economy. The influence of changing temperature is expected to have most lethal impact on this sector. The Indus Basin receives most of its water from the melting snow and glaciers, and accounts for the annual availability of water in the Indus River system. However, the availability of flow of water from the basin depends directly on the rise in temperature, which will result in more water to be available than is needed initially, and later on, when the volume of glaciers decreases, the water availability will eventually reduce. This reduced water availability will affect our agricultural sector, which in turn will adversely affect the industrial sector and resultantly Pakistan’s economy. Consequently, the livelihoods associated with both the sectors will also be affected. Hence, in order to tackle the climate change concerns, Pakistan signed the United Nations Framework Convention on Climate Change (UNFCCC) in 1992 and ratified the Convention in 1994.
Being among the countries that are highly exposed to the consequences of climate change, Pakistan has started facing growing climate related problems like increased floods and droughts, erratic weather patterns, loss of biodiversity, etc. This issue has become severe to the point that the recent instances of earthquakes and floods have completely rendered the coping capacity of people and institutions weak, making them more vulnerable to future climate change impacts. 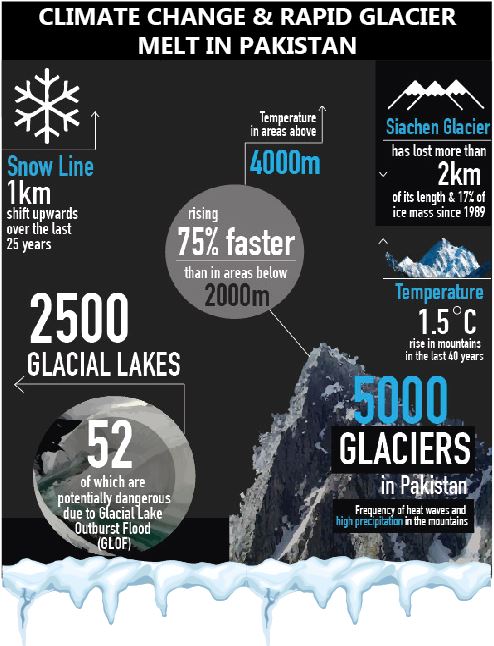 Saving the environment starts with us and it is our responsibility to take countermeasures to preserve the planet for future generations. Out of a number of countermeasures advised, the most imperative one is the reduction in carbon footprint. Over the next decade, the global carbon emissions should be reduced by 45% if we want to reduce the impact of climate change and save our glaciers. Additionally, environmental degradation has left nature incapable of absorbing more carbon; we have to restore nature’s ability to act as the carbon sink. ‘Rewilding’ schemes like planting trees and giving land back to nature is a good place of start.
One of the most cost-effective and easiest ways that would help restore the environment is use of zero waste strategies. Existing technologies and scientifically proven to be effective programs can help us achieve this goal, in addition to individual effort. Zero waste strategies could help us reduce greenhouse gases emissions, which would require adopting improved vehicle efficiency, carbon capture projects, etc. Recycling is also a major component of the zero waste management. Recycling to create new products would automatically reduce the consumption of fossil fuels and that would lead to lower greenhouse gases emissions.
Women are believed to be more affected by the climate change and as such, they can play an important role in the mitigation of climate change. Unfortunately, most women do not have the knowledge and awareness of what changes have to be adopted or what the need of the hour is to provide for practical solutions to climate concerns. Lack of access to financial resources, technology and training as well as limited flexibility in decision-making spheres in politics and other programs, etc., also renders them incapable of performing effectively against the prevalent climate challenges. Giving them enough power could bring about a good change regarding the climate concerns.
According to WWF, continuing emissions will most likely cause the Arctic to lose all of its ice by the year 2040. However, even if we manage to control the global emissions in the coming years, more than one-third of the Earth’s glaciers will be gone by 2100.We really need to start taking actions against climate change and mend our lifestyles accordingly to avert this disaster. HH