A Tale of Love, Woes & Hope: The Life of a Kashmiri Woman

The eminent Indian writer Arundhati Roy writes in her famous book, The Ministry of Utmost Happiness, “In Kashmir when we wake up and say Good Morning what we really mean is Good Mourning.”
Roy has depicted a truly gory picture of what Kashmir actually is. Every day turns out to be a mourning day for Kashmiris as a new martyr goes to his eternal destination while leaving behind the message of resistance and perseverance for their brethren, with the conviction that the struggle of self-determination will continue till the last breath of the last Kashmiri. 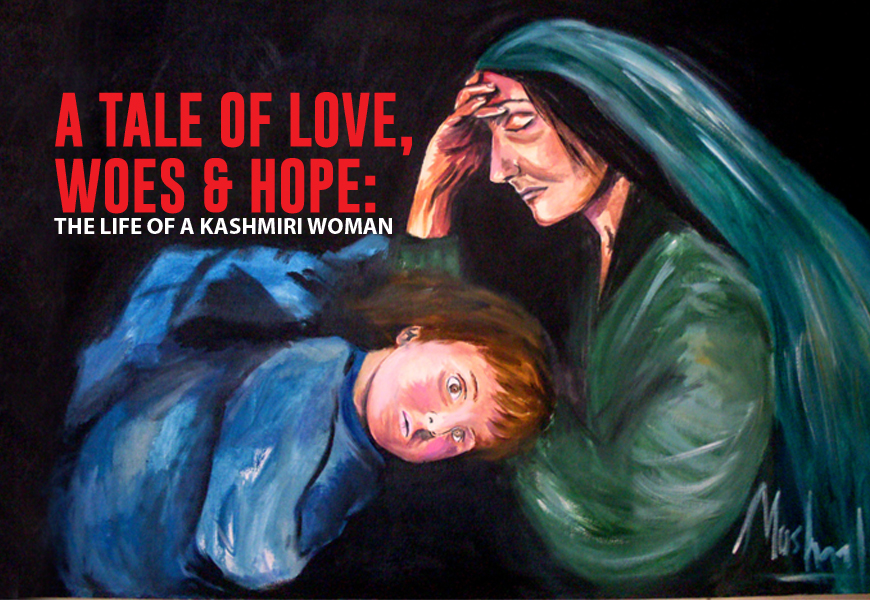 The freedom movement of Kashmiris is rooted in the struggle of the people for the exercise of the right to self-determination. Peaceful processions chanting demands for freedom are fired upon by Indian Army and police with pellets and bullets. Thousands and thousands of innocent men, women and children have been killed or wounded.
The people of occupied Jammu & Kashmir are struggling for their right to self-determination for the last seventy years but the movement got a fresh momentum after the martyrdom of Burhan Wani, a 22-year-old young freedom fighter.

The occupied forces have martyred over a 100,000 Kashmiris since 1989 but many mothers, wives, sons, daughters are stuck in a life that resembles more a shuttlecock between hope and fear in search of their loved ones. A woman who is a wife and a widow at the same time, she does not know, where her spouse is, if he is dead or alive or if he would ever return home. A mother, who continuously hopes to hear the footsteps of her son, is stuck amidst hope and fear. A child who is unable to decide if he or she is an orphan, with curious eyes constantly glued to the door, and a sister looking out from her window, simultaneously with anticipation and never-ending tears, in search of her missing brother.

Kashmiris are now challenging India on every front. The indigenous narrative of Kashmir unnerves India the most. The Struggle is a diehard romantic rebellion where every stone hurled at the Indian soldiers symbolizes a political expression of Kashmiris’ challenge to Indian state authorities. Indian occupied forces should realize the bitter reality that they could not deprive people of the Jammu and Kashmir of their right to self-determination through such brutal tactics and soon the dream of Kashmiri people to break the shackles of occupancy would turn into reality.
Whereas, India has left no stone unturned through its despicable designs to overpower the Kashmiris’ genuine right to self-determination, but in its quest it has failed to break the willpower of the Kashmiri people despite having a large number of troops in Indian Occupied Kashmir (IOK), committing heinous crimes against humanity on a daily basis. This naked, shameful and blatant state-terrorism by India must end. The free world must respond!
The occupied forces have martyred over a 100,000 Kashmiris since 1989 but many mothers, wives, sons, daughters are stuck in a life that resembles more a shuttlecock between hope and fear in search of their loved ones. A woman who is a wife and a widow at the same time, she does not know, where her spouse is, if he is dead or alive or if he would ever return home. A mother, who continuously hopes to hear the footsteps of her son, is stuck amidst hope and fear. A child who is unable to decide if he or she is an orphan, with curious eyes constantly glued to the door, and a sister looking out from her window, simultaneously with anticipation and never-ending tears, in search of her missing brother.
Sadly, these people have to face extraordinary challenges. These are the half widows, half mothers, half fathers, half orphans and half siblings in a society that is ripping apart at the seams. There is little left for them to say except to keep on searching for the traces of their loved ones who have entirely vanished or become invisible from the face of the earth.
Besides this, the issue of gang rape and molestation is very alarming. According to Kashmir Media Service, over 11,000 women have been raped from January 1989 till December 2018. The issue of physical and sexual abuse of women in warzone area is so alarming that the United Nations has passed a resolution on this matter. Despite this fact, the United Nations and other human rights watchdogs, not only turn a blind eye on these but also never utter a word about Kunan Poshpora rape case, where an entire village of women, ranging between the ages of 3 to 70 years, was gang raped by Indian forces in the early 90s.
Coming to my own personal struggle, as a girl of conflict, my life — if encapsulated in a few words — is a mighty journey bursting with enormous challenges, a constant quest for right to identity, right to honor and and right to self-determination — a lot of pain, bloodshed, curfews, tortures, prisons, separation of families, harassments, visa issues, uncertainties, mesmerizing beauty and heavenly nature of Kashmir’s topography,  art, poetry, literature, culture, echoing voices of freedom, peace battling war, undying resistance against Indian occupation forces and a literal heaven burnt to hell, sums up a bit of all that is bottled up inside.
Though I am a victim (I don’t want to be labelled as one) of a divided Kashmiri family and wife of detained Kashmiri leader, Mohammad Yasin Malik, Chairman Jammu Kashmir Liberation Front. I want to be addressed as a survivor, even though I have been attacked and harassed by the Indian forces many a times. I urge the United Nations to take special measures to protect against gender-based violence; above all rape and sexual abuse, and all other forms of violence in situations of armed conflict. If one compares the killings, tyranny, brutality and atrocities committed during World War II, Indian Occupied Jammu and Kashmir falls second in comparison.

I also urge the United Nations Secretary General to use their good offices to take notice of the Indian state-sponsored terrorism in Kashmir and prevail upon the Indian authorities to immediately cease all such actions that violate the human rights, dignity and fundamental entitlements of the Kashmiri people. The United Nations is not only the guarantor of fundamental human rights of people anywhere in the world but is also responsible for taking pro-active measures to ensure peace and protection of human rights in regions prone to conflict, such as the South Asian region.
My message is loud and clear: the people of Kashmir demand what was pledged to them by the United Nations and guaranteed by the Security Council — the right to self-determination — and I ask the Pakistani government to hold demonstrations outside the Indian embassies in EU, Britain, USA and other countries on Kashmir Day so as to awaken the conscience of international institutions and the entire free world.
Peace in the region would remain elusive without the resolution of the Kashmir dispute in accordance with UN resolutions that call for a free and fair plebiscite to determine the wishes of the people of Jammu and Kashmir.
Every human life is precious and as per the Universal Human Rights Charter every human being has the right to self-determination. All human beings are born free and equal in dignity and rights. This is stated in Article 1 of the Universal Declaration of Human Rights.
The seed of the idea of freedom and liberty has been sown in this heavenly land since decades. Insha’Allah it will sprout one day soon.HH

The writer is chairperson of Peace and Culture Organization and wife of Chairman Jammu Kashmir Liberation Front.
E-mail:[email protected], Twitter:@MushaalMullick