The 25th general conference of International Council of Museums (ICOM) took place between 1st and 7th September in Kyoto, Japan, in which approximately 4200 museum professionals from 118 countries participated. It was my first time representing Pakistan at such a prestigious platform as a member of ICOM-Pakistan’s National Committee. This was an experience like no other as it was the first time a woman represented Pakistan at ICOM. It is pertinent to mention that ICOM is a platform where many women can be seen playing a crucial role. Suay Aksoy, President of ICOM, Regine Schulz Director/CEO, Roemer and Pelizaeus Museum and Chairperson of ICOM Advisory Council are some of the big names who have made great contributions. Many international committees are also chaired and powered by women, making significant contributions towards their respective committees and their scope of work. Dr. Asma Ibrahim, Director State Bank of Pakistan Museum, also got elected as Secretary ICOMON, which is an international committee of ICOM on Numismatics. 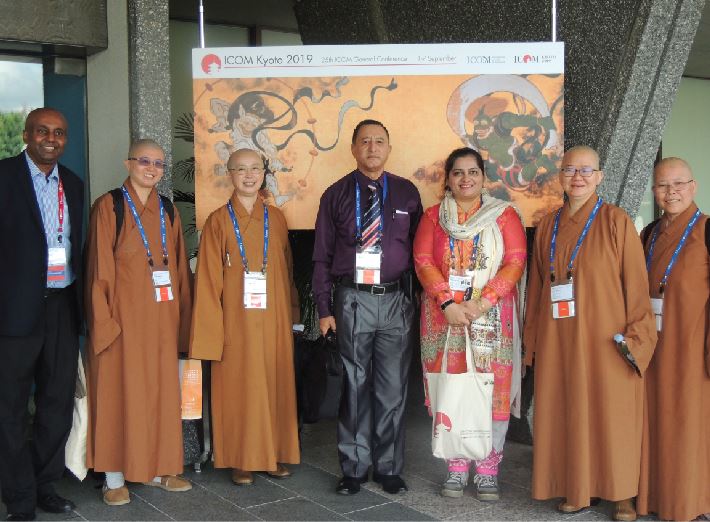 The grand opening ceremony of the general conference was a unique experience. The Crown Prince of Japan, Akishino and Crown Princess, Kiko, graced the occasion along with several government officials including the Mayor and the governor of Kyoto city. Witnessing their religious ethnic ritual(s) followed by a Noh performance, in which living national treasure Okura Genjiro played a hand drum from the Edo period — part of the Kyoto National Museum’s collection — was not only interesting but fascinating to watch.
Spread over seven days, the general conference also included 85th and 86th Advisory Council meetings, which consisted of the chairpersons of national and international committees, regional alliances, and affiliated organizations. Participants from across the world discussed a wide range of topics under the theme, ‘Museums as Cultural Hubs: The Future of Tradition’ and generated a healthy debate on the newly proposed museum definition. The conference offered several keynote speeches and plenary sessions on various topics related to museums and their sustainability, conducted on The Museum Definition — The Backbone of ICOM, followed by different training workshops and mentoring sessions.
President National Committee of ICOM Pakistan was elected as an ordinary board member of Asia Pacific Alliance (ASPAC), which made Pakistan a strong standing member among other Asian countries at the ICOM platform, which will have a greater impact on our museums and a more prominent representation in that regional alliance.
The exhibition booths were worth visiting where I found many museum related goods and service providers and the information I gained was significant to carry, share and circulate among other museum professionals in Pakistan. The exposure to the newly introduced techniques being used in museums worldwide was an eye opening experience, which we need to learn, explore and implement in Pakistan.
Several offsite meetings were organized by international committees and regional alliances at various locations and museums. We visited Mint factory in Osaka where they also have an elaborated mint museum with a huge collection of ancient as well as contemporary coins (currency as well as commemorative) from across the world and yes, I was exhilirated to see coins from Pakistan as a part of their extensive collection. They provided us with an opportunity to make replicas of their ancient coins through their traditional methods. We also visited Money Box Museum in Osaka, which grabbed the attention of all participants, as the money boxes exhibited reflected different cultural objects and monuments, such as Eifel Tower and Statue of Liberty, action figures such as Batman, Superman and Minions, etc.
ICOM Kyoto 2019 Organizing Committee arranged 40 different excursions for conference participants and we got a chance to visit northern Kyoto Prefecture, where we visited Maizuru Repatriation Memorial Museum. The mayor of Maizuru invited a senior citizen, a survivor of the Second World War who recalled his suffering and miseries and the pain of loosing his friends who died working in the harsh weather. During the interactive session, I took the liberty to ask his views, opinion and message for world powers including United Nations on the genocide in Kashmir, Palestine and Syria. He replied, “My message to the world powers as well as UN is only ‘Peace and not war’.”
We then visited World Brick Museum at Maizuru. It was so overwhelming to see a section showcasing scenes and historical introduction of Mohenjo Daro from Indus Valley Civilization at the entrance of the museum, among exhibits from 42 different countries. I encouraged the Museum Director to also have other exhibits from Pakistan, specially from Mehr Garh and Gandhara Civilizations besides Indus Valley Civilization, and not to forget the diversified Mughal, Sikh and Colonial periods’ architecture and offered my assistance on behalf of ICOM Pakistan to create liaison in this regard.
The last day of the conference was crucial and decisive in many ways as we witnessed a very healthy, democratic yet aggressive debate on the postponement of voting on Museum definition among several items on agenda.
The proposed definition is as follows: ‘Museums are democratizing, inclusive and polyphonic spaces for critical dialogue about the pasts and the future. Acknowledging and addressing the conflicts and challenges of the present, they hold artefacts and specimens in trust for society, safeguard diverse memories for future generations and guarantee equal rights and equal access to heritage for all people.
Museums are not for profit. They are participatory and transparent, and work in active partnership with and for diverse communities to collect, preserve, research, interpret, exhibit, and enhance understandings of the world, aiming to contribute to human dignity and social justice, global equality and planetary well being.’
I believe, it was the right decision especially for countries like Pakistan to get all our members on board for a healthy debate to finalize the museum definition, which also gave us an opportunity to think about introducing museum laws in Pakistan just like other countries as the existing Antiquity Act has a wide scope, which argues about excavations, licence and related issues but not about museums and museology itself.
On my way back from Koyoto, Japan I not only carried beautiful memories but new ideas in museum management, techniques and showcasing, which we can introduce in Pakistan. It is very important to admit that the Japanese were a great host country for ICOM General Assembly as they are very punctual, hard working and organized, which is why they are very successful; they have faced several natural and man made calamities and yet they are a strong nation. HH

The writer is working with Center for Culture and Development,
also serving as Secretary, ICOM Pakistan National Committee.
E-mail:[email protected]