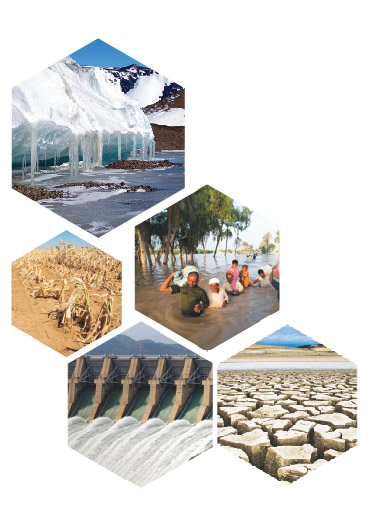 Climate change can be explained from different perspectives, but the most relevant for Pakistan is how the global warming (increased temperature) would impact its 200 million plus inhabitants in terms of water availability. In our context, it is either too much water available over a short period of time which may lead to floods, or lack of water over prolonged period of time leading to droughts. Incidentally Pakistan is experiencing both. Over the last 30 years, climate trends in Pakistan have shown a steady rise in temperatures and high variability in annual rainfall (an annual average of 100mm in Balochistan to 1500mm in Northern areas). The frequency of rainfall has also changed and onset of monsoon, an annual phenomenon that brings 84% of our rainfall, has been delayed by up to 30 days per decade during the last two decades in the eastern part of the country. Meteorological data also informs us that extreme rainfall events (over 50mm rain per day) are increasing and duration of the monsoon season has decreased overall.

One should keep in mind that agriculture is the largest consumer of water, with average consumption of 91.6% of water available. Domestic/household consumption is 2.5%, industry’s is 3.3% and environment’s is 2.6 %. It means that the shifts in rainfall pattern would have direct impact on agriculture. It is delaying the sowing phase of various crops thus extending the lean season for farm households. This results in an increase in food prices and triggers food insecurity for poorer farm-based livelihoods, particularly in rural areas, with little opportunities for livelihood diversification. Shorter span of monsoon rainfall results in long dry season for most of the country throughout the year. This all is a manifestation of the changing climate.

Climate change not only poses a threat to life, ecosystems and local, national and global economies but also economic and social setup of countries. Before discussing how to cope with changing climate, let us discuss how climate change is affecting Pakistan.

Studies suggest that Pakistan is one of top ten countries in the world most at risk of climate impact (in longer term). The risk index in the study is based on data from the year 1994 to 2013. Pakistan is ranked high due to losses suffered both in terms of human life and expenditures incurred as a result of floods, drought and heat waves. 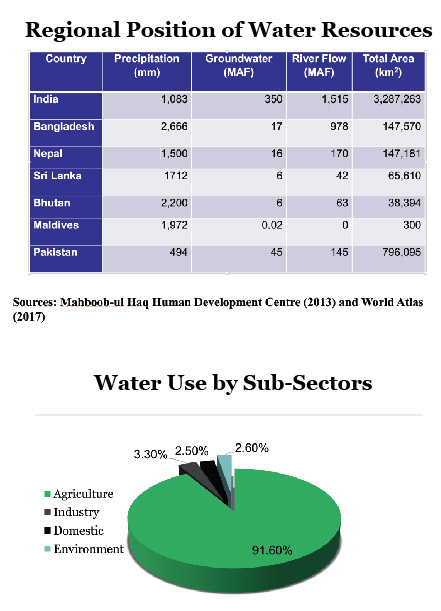 Water availability beyond our needs, storage capacity, and control leads to floods. Floods are one of the major climate hazards facing Pakistan. During the recent past, the country has seen numerous episodes of floods. The mega flood of 2010 was particularly devastating with over 20 million people affected. These were followed by the 2011 and 2012 floods which were also destructive causing huge losses to the affected population in mainly the two provinces of Sindh and Balochistan. Consecutive floods were followed by heavy erratic monsoon rains in 2014 in the province of Punjab which caused further flooding in a number of districts. In 2015, various districts of Khyber Pakhtunkhwa, to a varied degree, were affected by floods, especially Chitral where flash floods caused huge losses in terms of lives, livelihoods and shelter.

Such floods have led to destruction of agricultural crops and household food stocks, lots of livestock and livelihood assets, outbreak of diseases, and pushed households further into food insecurity and malnutrition. Table 1 presents a summary of losses from various flood events in Pakistan since 1950. 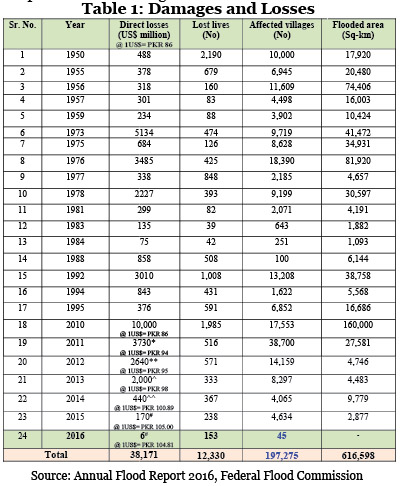 On the other hand, the condition emerging from too little precipitation over a long period of time is drought. Unfortunately Pakistan has a history of recurring droughts, estimated to occur every 16 years in the country. Droughts along with extreme heat not only result in crop failure and degradation of pastures but affect sustainability of livestock herds. Severe heat waves have occurred in Pakistan throughout the past decades. The latest event that occurred in June 2015 in Sindh killed over 1,000 people. Moreover, extreme temperatures can alter crop growth.

Persistent droughts of 1999-2003 devastated Pakistan’s economy and especially the agriculture livestock sectors. The result was not only the death of hundreds and thousands of animals in Balochistan, southern parts of Punjab, and interior Sindh, but also an increased perception of exclusion and marginalization among the people of affected regions. The latter erodes the social fabric of a nation and can turn into a non-traditional security threat.

Glaciers of the Hindu Kush, Himalayan-Karakoram range are an integral source of Pakistan’s water supply. These glaciers are considered as the ‘third pole’ and recognized as a hotspot of climate change due to the potential impact of rising temperature on snow, the main source of water flows in the region including in Pakistan.

Glacial Lake Outburst Floods (GLOFs), triggered by glacial melt due to rising temperature, have endangered lives and livelihoods in the northern mountain areas of Pakistan. Glacial melt and heavy rainfall in a short duration also leads to landslides, and snow avalanches. Pakistan observed one of the worst tragedy due to snow avalanches in 2012, when 135 people (124 soldiers and 11 civilians) embraced martyrdom at Gyari military base which got trapped under an avalanche.

My hypothesis is that insecurity breeds insecurities. Insecurity because of too much or too little water may give rise to food insecurity, fuel insecurity, livelihood insecurity, and physical insecurity. Frequent extreme  climate events, heavy reliance on climate-sensitive sectors like agriculture and lower adaptive capacity of poor households make Pakistan more vulnerable to climate change. Pakistan’s vulnerability to climate change is further compounded by socio-economic vulnerabilities. These socio-economic vulnerabilities are highly correlated with economic growth, such as weak institutions, poor health and sanitation systems, lower levels of education and an unstable financial sector. In this context, it can be said that in a country like Pakistan where one bad monsoon season can adversely impact all economic planning, climate change can have major socio-political and socio-economic implications.

In Pakistani context, it means a growth strategy that is compliant with changing dynamics of water availability. We have three major sources of water which are precipitation, ground water, and river flow. 84% of Pakistan water flows come in summer and remaining 16% in winter. Water demand during summer and winter is 66% and 34%. Thus there is 18% surplus during summers and 18% shortage during winters. Summer surplus causes floods and winter shortage affects the cropping operations during Rabi season. In the short to medium run, the chances of floods would increase due to erratic rainfall and rapid glacier melting. However, rapid glacier melting would reduce the river flow from 30 to 40% during this century.

In my opinion, one needs to frame some questions and try to explore their answers in order to turn the challenge of floods into a learning opportunity for future disaster preparedness. Coordinating the delivery of flood reconstruction; having plans ready beforehand (being "prepared"); bringing all the involved stakeholders on board; ensuring the proper operation and maintenance of irrigation structures, creating but also operating and maintaining organizations for disaster preparedness–all these are facets of governance which need to be improved for getting us ready to face the challenge of floods in Pakistan.

In this context, the way forward is increasing water storage capacity to overcome these surplus and shortage conditions and ensure steady flow of water distribution throughout the year. A cascade of dams (where feasible) should be built. Some potential dams include but are not limited to Akhori Dam, Dasu Dam, Bunji Dam, Thakot, Pattan Dam, and Munda Dam.

Construction of new dams is also important because the existing dams, Mangla and Tarbela dams which were constructed to divert the water from Kharif to Rabi season are not able to meet our requirements because of temporal variabilities, dry periods and reduction in storage capacity because of siltation. Moreover, improved surface water availability will reduce groundwater abstraction because former is cheaper than the latter (in the current water pricing regime). 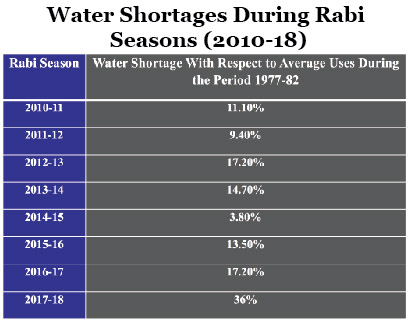 As part of climate resilient development strategy we would have to shift from flood irrigation to drip and sprinkler irrigation systems.

Initially, this process will need support from the government in the form of subsidy. In the long run, indigenized production of high efficiency irrigation system will have to be focused to make it available to farmers at cheaper rates.

Once water takes a central stage in our economic decision making, then we would have to think of our farming pattern, how much to grow, and where to grow. We are virtually exporting our water when we export rice and sugarcane. A paradigm shift to “crop per drop” would be a way forward to prepare for water scarcity due to climate change.

My hypothesis is that insecurity breeds insecurities. Insecurity because of too much or too little water may give rise to food insecurity, fuel insecurity, livelihood insecurity, and physical insecurity. Frequent extreme climate events, heavy reliance on climate-sensitive sectors like agriculture and lower adaptive capacity of poor households make Pakistan more vulnerable to climate change.

Equally important would be improving water governance. There is a need for rationalizing water prices not only for irrigation water, but also for domestic and industrial usage. There is no incentive for water conservation in existing pricing structure. That is why from our washrooms, to car wash, irrigation in the fields, we have been making lavish use of water.

Current water pricing structure reminds one of the natural gas pricing structure of 80s and 90s. The readers may recall that gas was cheaper than a match stick and that was the reason that “pilot burners” of the gas stoves were left on in those days to save match sticks. Talking of natural gas scarcity in Pakistan in 80s and 90s sounded insane. However, only two decades later we had to observe gas shortage and now we are compelled to import RLNG. Likewise, talking about water scarcity in Pakistan may sound a bit absurd. However, it is a fast approaching reality. We can import gas but would never be able to meet our water requirements through imports. The solution to this challenge is storage and adaptation. Remember climate change is a direct result of human activities. We need to act sensibly and fast before it is too late!