Trafficking of Antiquities: A Global Threat to Pakistan’s Heritage

Illegal trafficking and the presence of black markets has led to the destruction of valuable archaeological records and markers of history, despite the blanket ban on the domestic trade and export of cultural property. 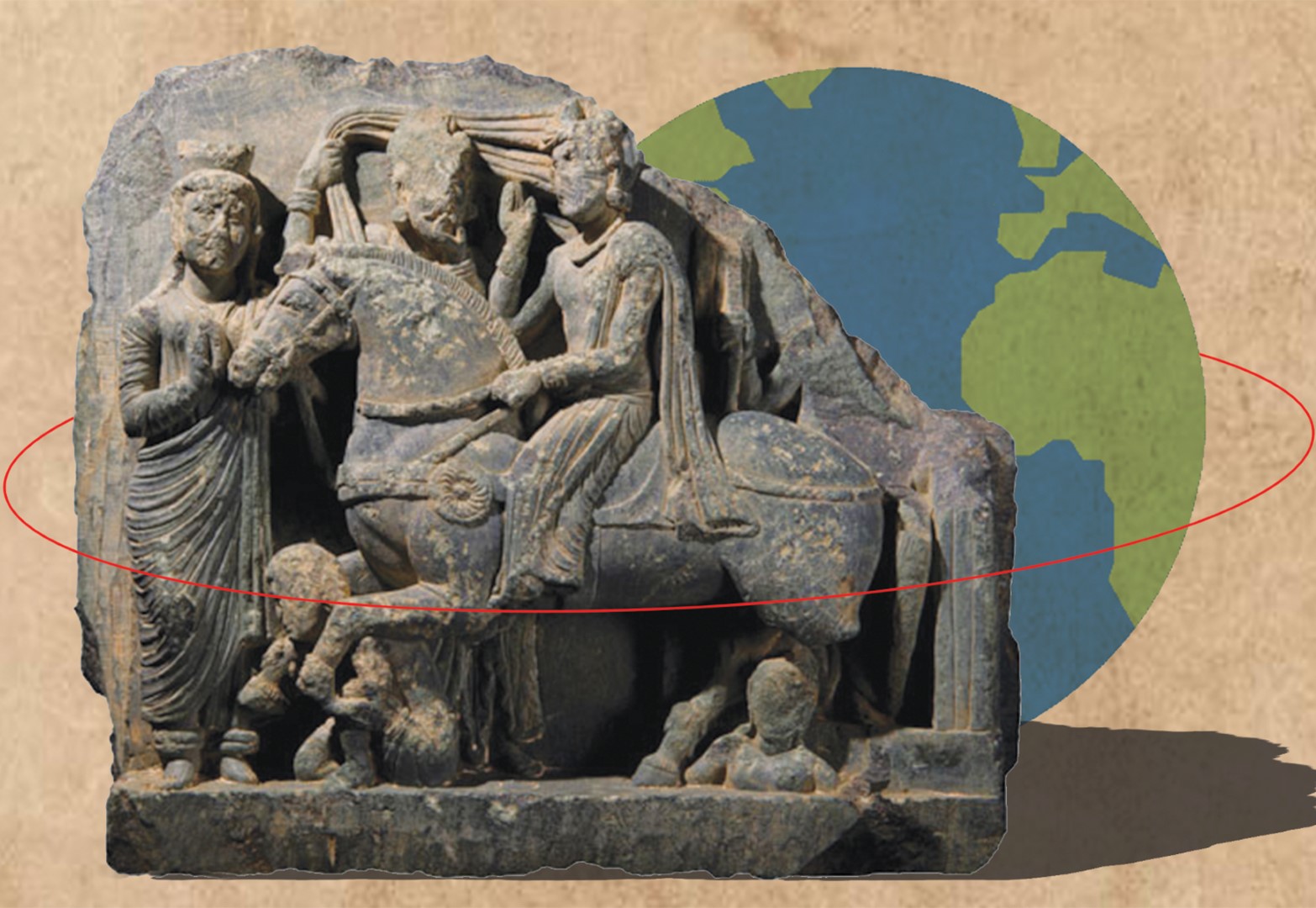 Pakistan lays claim to a deep historical past, with a recorded history of more than seven thousands years. From the prehistoric civilization of Mehrgarh located at the foot of the Bolan Pass to the Indus Valley Civilization in the fertile plains of the Indus and Gandhara civilizations in the green valleys of Peshawar, Swat and Taxila, the glorious ancient civilizations have left their traces all over Pakistan. The monuments of the medieval era belonging to the Mughal Empire, studded with decorations, are still standing tall all over the country. Our civilizational past makes us rich in coveted artifacts, which are highly prized by the markets in East Asia, Europe and America, comprising collectors, galleries and museums in the world. To protect its immensely valuable cultural property, like other artifact-rich nations, Pakistan has responded by nationalizing all antiquities, known or buried, and imposed a blanket ban on the domestic trade and export of cultural property. The prevailing law to protect cultural heritage is called the Antiquities Act of Pakistan, enacted in 1975 by the Federal Government, which formed the basis of all provincial laws in Pakistan.

To protect its immensely valuable cultural property, like other artifact-rich nations, Pakistan has responded by nationalizing all antiquities, known or buried, and imposed a blanket ban on the domestic trade and export of cultural property. The prevailing law to protect cultural heritage is called the Antiquities Act of Pakistan, enacted in 1975 by the Federal Government.

The federal and provincial governments own nearly a thousand sites and monuments across Pakistan, while less than a quarter is protected by law through administration and conservation. The understaffed and underfunded departments of archaeology and museums are already working beyond their professional limits, to explore, excavate, preserve, exhibit and protect cultural property. There exist yet a large number of unprotected archaeological sites in Gandhara, in the artifact-rich Kyber Pakhunkhwa (KP), which are at the mercy of illegal diggers. A similar scenario exists in the whole of Punjab, Sindh, Balochistan, Gilgit-Baltistan and Azad Kashmir, where objects are falling into private hands in a greater number. Such pillage and looting of national treasures from the past civilizations not only impoverishes the nation but it also brings a little more than subsistence income to the treasure hunters who are at the bottom of this illegal supply chain. Without a legal domestic market, it is estimated that 98 per cent of the final price of stolen antiquities ends up in the pockets of international dealers who are a part of smuggling syndicates. Pakistan’s unique and irreplaceable national treasures are being given away for a small gain and there appears to be little one can do to avert it.
There are tremendous economic incentives for illicit international trade in antiquities with corresponding lower risks. According to Interpol figures, the estimated value of illicit trafficking in antiquities comes to nearly USD ten billion per year. The black market is also linked with organized crime and terrorism. Pakistani security experts believe that ten per cent of the total terror financing in Pakistan used to come through illegal antiquities trade. If the profits in antiquities smuggling are greater, the penalties are lighter for dealing in the similarly produced amount of narcotics, not only in Pakistan but also in the rest of the world. This drives illegal excavations by treasure hunters and sustains powerful mafias that are able to smuggle these out of the country. Smugglers forge papers and falsify the provenance or origin of the artifacts and thus bribe their way through customs. Beside the loss of revenue, the illicit trade in antiquities leads to the destruction of valuable archaeological records of the site. The smugglers deface the artifacts, behead statues, melt down ancient coins, chisel relief from tombs and break up the collection to hide their origins.
United Nations Educational, Scientific and Cultural Organization (UNESCO) spearheaded the first diplomatic attempt in 1970 to develop an international framework for the prevention of illicit trafficking of antiquities. The Convention on the Means of Prohibiting and Preventing the Illicit Import, Export and Transfer of Ownership of Cultural Property has been ratified by 141 countries to date. Despite the importance of the UNESCO convention, its impact on illicit trafficking is rather limited. It only serves as a moral force and is not a binding document that enforces prohibition on the import of illicit antiquities in the rich market countries. It encourages each country to develop its own legislation to prevent the illicit trafficking of antiquities. For a variety of reasons, not all countries are equally motivated to enact the legislation in accordance with the UNESCO convention. Many countries of the western world operating under a free market philosophy in relation to the movement of antiquities saw the call for prohibition as contrary to the western ideals of inalienable right to own property. As a result, major art purchasing nations of the world remained reluctant and ratified the convention decades after its inception. England in 2002, Switzerland in 2003, Germany in 2007, Japan in 2002, the Netherlands in 2009 and France in 1997. Although USA ratified the convention in 1983, it implemented only two sections of the UNESCO convention through its own legislation with limited coverage of products and weak punishments leading to civil forfeiture without a criminal penalty. The American legislation prohibits the import of only those items which are proven by the claimant or exporting country to be stolen from a documented collection. Additionally, the claimant country must have ratified the UNESCO convention and worked out a bilateral agreement for the restitution of illicit antiquities with the USA.

Once the illegally exported antiquities leave the country, they are not considered contraband items when imported into their destination countries. There is little the Pakistani state can do to stop its stolen or illegally excavated artifacts from entering the Western antiquities markets dominated by auction houses like Sotheby’s and Christie’s. The auction houses rarely give full details of the provenance of the artifacts as a matter of institutional policy. Instead, they only provide the barest anonymous outlines. Forged or falsified provenance documents supplied by the smugglers are readily accepted by these auction houses. The legal system in the market nations encourages the flow of artifacts from dealers to collectors and museums. In America, there are favorable tax incentives for fine arts donations that encourage collectors to purchase antiquities and give them to the museums.
A much publicized case of the fasting Buddha, which appeared on the lot of auction house Christie’s in New York in 2011, illustrates the point. It came to the auctioneers from a private collector who acquired it in Germany in 1981. The Pakistani Department of Archaeology and Museums made its best legal efforts through the embassy of Pakistan in Washington to stop the antiquity from being sold but failed due to the lack of bilateral agreement between the two countries. Eventually the fasting Buddha was sold by Christie’s for nearly USD 4.5 million in 2012. There were 29 other artifacts from the Gandhara region, including relief works, busts, figurines and relic caskets, which met a similar fate at the altar of Christie’s. 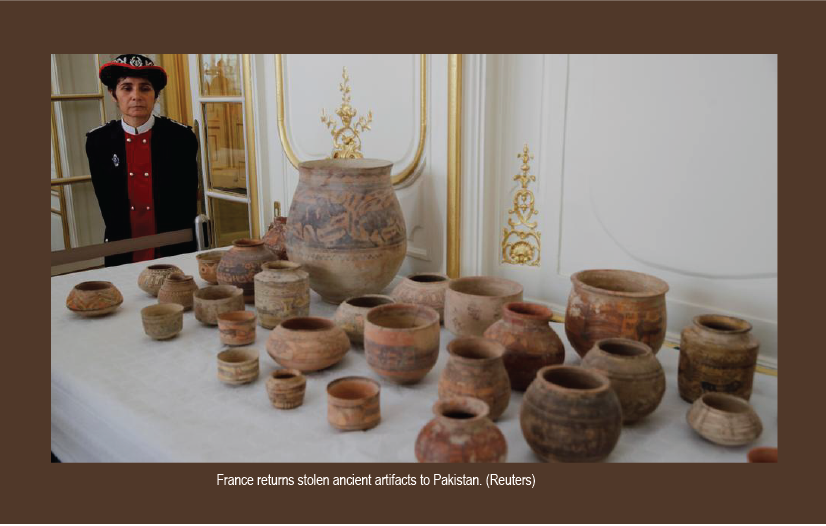 Once the illegally exported antiquities leave the country, they are not considered contraband items when imported into their destination countries. There is little the Pakistani state can do to stop its stolen or illegally excavated artifacts from entering the Western antiquities markets.

The real profits of Pakistan’s treasures are harvested by corporate thieves in the rich market countries. It is in their interest to propel illicit trafficking and perpetuate the plunder of archaeological sites in artifact-rich nations like Pakistan. A case in point is the hyped up five figure sum purchase of the 60 Buddhist scrolls in Kharosthi script by the British Library in 1994, with origins in Afghanistan and Pakistan. Given the prestige of the British Library, it generated a unprecedented demand for the Buddhist manuscripts with more than 5000 fragments and 7000 micro-fragments of Buddhist scriptures coming up on the market in the next five years. The demand was met by the ruthless exploitation of Gandhara sites in Afghanistan and Pakistan, including a prominent site in Gilgit where hundreds of Buddhist manuscripts lie deeply buried for thousands of years.
Despite having one of the most stringent antiquity laws in the world – first enacted under a protectionist framework of British colonial rule – the pillage and smuggling of archaeological artifacts has reached epidemic proportions. The reasons for illicit trafficking are well understood, yet the solution of the problem cannot be found without major rethinking of the current state laws, policies and institutional practices governing the heritage.

The writer is an anthropologist working for the Center for Culture and Development (C2D), Islamabad. He is also the founding member of the Gandhara Resource Center Pakistan.
E-mail: [email protected]