This is India. A Genocide is Brewing.

Who could have thought that India would see the day when religious violence in that country would overshadow visits by the top leaders of America and Japan? But this is exactly what happened in December 2019, when Shinzo Abe canceled a visit due to violence on Indian streets. And this is how an article in the Time magazine described the American president’s stay in India two months after Abe canceled his trip: “It takes a lot to overshadow a foreign visit by a sitting U.S. president. India managed the feat this week, as Delhi was plunged into violent chaos as protests over India's controversial new citizenship law reached disturbing new levels.” 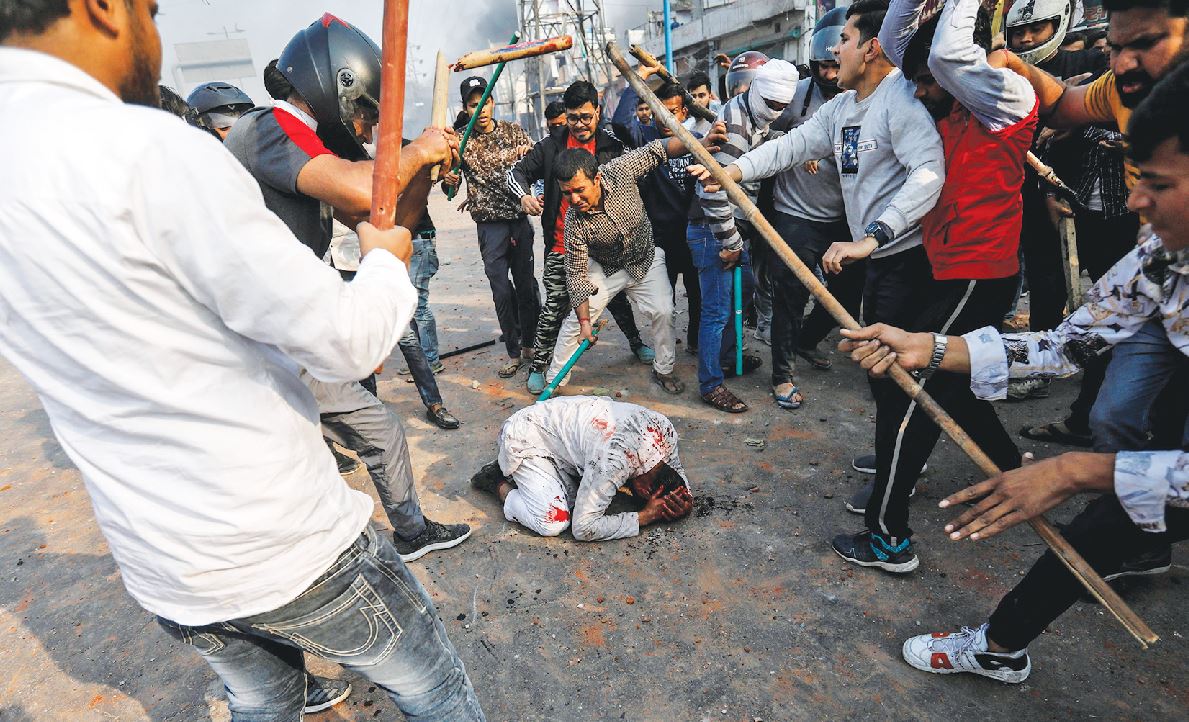 In fact, who thought a day would come when Ian Bremmer, the president of Eurasia Group, the world’s foremost political risk research firm, would have this title for his article on India in Time magazine: “What happens next with the violence tearing apart India.”

And the caveat here is ‘tearing apart’ because this is the crux of India’s emerging new story, which has overshadowed the other narrative about India as a model for developing states.

India is tearing itself apart in ways that this nation has not seen in centuries, or possibly ever. And the world is finally paying attention. Imagine a country the size of India, over a billion people, where religion is being weaponized, generating massive unrest that could end in violence on an unprecedented scale.

India is tearing itself apart in ways that this nation has not seen in centuries, or possibly ever. And the world is finally paying attention. Imagine a country the size of India, over a billion people, where religion is being weaponized, generating massive unrest that could end in violence on an unprecedented scale. And possibly genocide [forty Indians were killed, and hundreds injured in the Indian capital during President Trump’s stay. The Indian government had to shift reception ceremonies away from the capital to avoid any threat to the American president and his entourage.]

Or, in the ominous words of Aljazeera Plus journalist Haris Alisic in his recent tweet of April 26: “This is India. A genocide is brewing,” accompanied by a video that shows Indian aid workers denying food packages to impoverished Indian Muslim families. “Muslims don’t get rations. Muslims spread Coronavirus,” the Indian aid workers can be heard saying.

India is tearing itself apart in different directions, at multiple levels. Led by religious extremists in power, through the Bharatiya Janata Party (BJP), the Indian government is involved in the longest lockdown of millions of people in modern history, in Kashmir; and is patronizing a hate-drive against some 170 million Indian Muslims. And – when done with Kashmiris and Indian Muslims – there are disturbing indications that Indian Christians are next.

What is Actually Happening

Mr. Bremmer’s article in Time magazine was focused on the riots and violence resulting from a change to Indian citizenship law [formally known as The Citizenship (Amendment) Act, or CAA]. This is a unique piece of legislation designed to find a legal and constitutional way to target the largest minority in India.

This law is so wicked that one is compelled to believe that the BJP, led by Prime Minister Narendra Modi, is engineering an implosion in India.

The Indian parliament passed the CAA on December 11, 2019. This amends a 1955 law to help illegal immigrants from neighboring Pakistan, Afghanistan, and Bangladesh to get Indian citizenship, provided they came to India before December 2014. But to do this, the immigrants must be Hindu, Sikh, Buddhist, Jain, Parsi, or Christian. The amendment says Muslims are not eligible.

Apart from the many cases of Indian Hindu nationalists targeting Christians in India, one can find many disturbing anti-Christian posts hidden in the stacks of anti-Muslim content floating on Indian web.

If this were not enough to irk Indian Muslims, the amendment came with plans to establish detention centers to primarily arrest Muslim illegal immigrants.

The amendment included enough feel-good material to dodge bad press. It offered citizenship to minorities “persecuted” in neighboring countries like Pakistan and Afghanistan, a noble cause that would not raise eyebrows domestically, and would invite praise internationally. But the problem is that no illegal immigrants from either country are crashing India’s border for a chance at the ‘Indian Dream’ [It is not like Pakistan is Mexico and India is America, but India does have illegal immigration problem at its borders with Bangladesh]. A negligible number of Pakistani and Afghan Hindus did move to India over the years mainly because of instability, but the numbers do not justify such a major piece of Indian legislation at this moment in time.

The CAA, despite being packaged in the noble idea of asylum to persecuted minorities from neighboring countries, is a vehicle for the BJP’s main religious extremist agenda: targeting Indian Muslims.

But why target and alienate 170 million of your citizens and push for civil war? How does this benefit India? This is a key point to understand before we move on to discuss Kashmir and Indian Christians.

There is only one explanation to the rising incidents of violence against Indian Muslims. Modi won the election in 2014 by offering himself as the man to energize Indian economy and take it to new levels. He marketed India diligently and created a name for himself internationally, even if others ridiculed his style of approaching world leaders [The Washington Post, for example, titled a report in this way: Narendra Modi won’t stop hugging world leaders no matter how awkward it is.]

But Modi’s economic wizardry tanked, and sometimes even backfired. This has left Modi and the BJP with one way to whip up electoral support: stoke Indian religious nationalism. Modi tried to do this through military might. He sent fighter jets into Pakistan, in February 2019, with the hope that the smaller neighbor will not retaliate and risk a war. Modi wanted to show his base he ‘defeated’ Pakistan. But the swift Pakistani response, downing two Indian jets and capturing an Indian pilot, convinced Modi he will have to find another way of reinvigorating his base.

A year later, on March 2, 2020, the Government of Kuwait, in the Arabian Gulf, condemned acts of violence against Indian Muslims, with other Gulf states coming down hard on Hindutva members within the sizable Indian expat community in the Gulf who indulged in anti-Muslim hatemongering on social media.

This alternative way is to pivot Indian Hindu nationalism around fighting the ‘threat’ to Mother India from Indian Muslims.

A steady stream of mobile phone videos emerged in India over the past year that show graphic incidents of mob assault on unarmed Indian Muslims, often beating them senseless, and in some instances killing them by torture and beating. A carefully crafted propaganda campaign justified attacking Muslim citizens by portraying the Muslims as misguided Indian Hindus whose ancestors “converted” from Hinduism as a betrayal to the motherland and it was the job of patriotic Indians to bring these misguided Indian Muslims back into the fold.  This violence continues unabated.

Prime Minister Modi’s only path to holding on to power now goes through a genocide.

The Lockdown in Kashmir

This is a second dimension to the ruling Indian Hindu nationalist BJP’s agenda. The Washington Post has termed India’s now nine-month-long internet shutdown and the siege in Indian-occupied Jammu and Kashmir as “the longest ever in a democracy.” 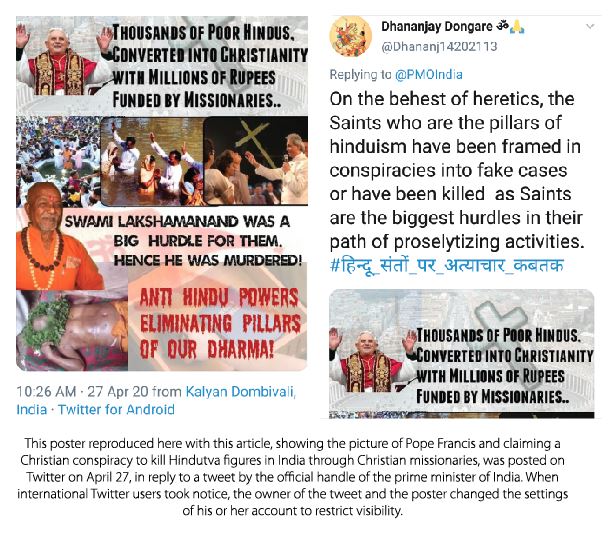 India will not lift the siege and lockdown because Prime Minister Modi feels mass street protests will ensue, so he prefers to keep around eight million Kashmiris inside the “world’s largest open-air prison,” the term that came up in an interview by Tim O’Connor in Newsweek with a Kashmiri leader.

For decades, the world media ignored Kashmir. But not now. There is unprecedented international scrutiny [even President Trump has repeatedly offered to help resolve Kashmir conflict, ignoring Indian appeals the region is India’s undisputed territory]. This means Modi is likely right that the international media will magnify anti-India protests in the disputed territory once the lockdown is lifted. India’s strategy here is to keep the lockdown long enough for the Kashmiris to be exhausted or for the world media to lose interest. But neither is likely to happen, and Modi is digging himself deeper into a hole.

India enacted a law [Jammu & Kashmir Reorganization Act] in August 2019, aimed at the full annexation of the disputed territory into India, an act that Kashmiris do not accept.
Kashmir is recognized internationally, by major powers and by the United Nations, as an ‘Indian-controlled’ disputed territory pending final settlement. India’s narrative of full ownership of Kashmir has no international takers. The lockdown and curfews in Kashmir are considered part of India’s larger anti-Muslim drive under Prime Minister Modi.

Make no mistake, after Kashmiris and Indian Muslims, Indian Christians are next in line to suffer the wrath of Indian religious extremism.

Apart from the many cases of Indian Hindu nationalists targeting Christians in India, one can find many disturbing anti-Christian posts hidden in the stacks of anti-Muslim content floating on Indian web.

This poster reproduced here in this article, showing the picture of Pope Francis and claiming a Christian conspiracy to kill Hindutva figures in India through Christian missionaries, was posted on Twitter on April 27, in reply to a tweet by the official handle of the prime minister of India. When international Twitter users took notice, the owner of the tweet and the poster changed the settings of his or her account to restrict visibility. Luckily, we have a screen grab and a link to the tweet.

In March 2019, supporters of Modi’s government tried to force an American professor at Rutgers University to retract her statement comparing the extremist Hindutva ideology of the Indian government to Nazism. The university did not budge and instead backed its teaching staff member. A year later, on March 2, 2020, the Government of Kuwait, in the Arabian Gulf, condemned acts of violence against Indian Muslims, with other Gulf states coming down hard on Hindutva members within the sizable Indian expat community in the Gulf who indulged in anti-Muslim hatemongering on social media.

The writer is a journalist who covers Indian affairs. He tweets @_AhmedQuraishi