The recent wave of terror in Pakistan has jolted the nation. Questions are being raised on sustainability of gains of Zarb-e-Azb and national policies against terrorism are also being grilled. It is a natural reaction because in four days, from February 13 to February 16, terrorists carried out 12 attacks in which 129 people were killed including 103 civilians and 22 security forces personnel and 365 people were injured including 356 civilians and nine security forces personnel. Four of these twelve attacks were suicide attacks carried out in Lahore, Mohmand Agency (FATA), Peshawar, and Sehwan Sharif (Sindh).

Although the reaction is natural as mentioned earlier, however, if the situation is seen in an overall context then one can do a better analysis. Pakistan Institute for Conflict and Security Studies’s militancy database shows that average militant attacks in 2014 before Zarb-e-Azb were 161 attacks per month. With Zarb-e-Azb in North Waziristan, Operation Khyber I and Khyber II in Khyber Agency, targeted operation in Karachi, intelligence based operations in mainland and adoption of National Action Plan at political level, the violence dropped to an average of 42 militant attacks per month during the last two and half years. In fact, the number of militant attacks dropped below the year 2007 when a sudden rise was seen in violence against the state after Lal Masjid Operation. The same year in December, Tehreek-e-Taliban Pakistan (TTP) was formed which subsequently captured areas in South and North Waziristan and vast areas in Malakand Division of Khyber Pakhtunkhwa.

As the current wave of violence in Pakistan is in one way or the other linked with international terrorism we can better comprehend gains of our security forces by comparing them with other countries fighting against terrorism. It is a matter of fact that during the last fifteen years, no other country except Sri Lanka could reclaim such a vast area from militants as Pakistan Armed Forces did. Pakistan also played a vital role in supporting Sri Lankan Armed Froces in defeating Tamil Tigers in Jafna. Pakistan Armed Forces set an example by clearing Malakand Division, Bajaur, Mohmand, Khyber, Orakzai, South and North Waziristan agencies. During the same period, across the border in Afghanistan the world’s best armies led by the United States were struggling to contain militant threat. Taliban spread to far long areas like Badakhshan and other northern parts of the country. Most of the rural area of our neighbouring country is practically ruled by Taliban insurgents. America and her allies failed to contain violence in Iraq which is spread across Syria and now most of the Middle East is on fire due to failure of western military interventions. Libya was also pushed into civil war by western military intervention while Yemen and Somalia are also engulfed in civil wars. In contrast, Pakistan Armed Forces can be seen distinct from the rest of the world with lots of success stories in defeating militants despite facing financial and technological constraints. 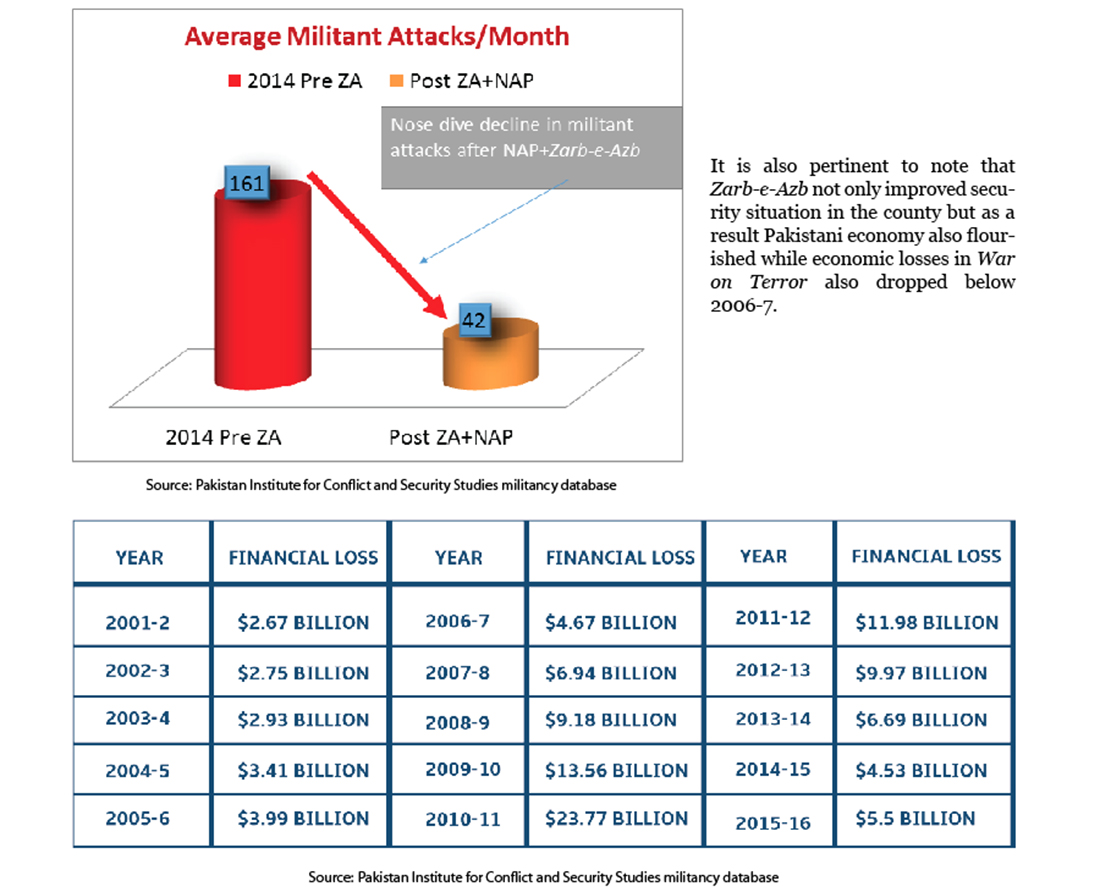 Thanks to Zarb-e-Azb, it is for the first time during the last fifteen years that no area or even a pocket of area is under militant control. Major militant groups fighting against Pakistan faced serious defections. TTP split in to at least four sub-groups, one of them is Jamat-ul-Ahrar. All these groups were flushed out from FATA and now they are operating from Afghanistan’s Kunar and Nangarhar provinces. They are being fed by anti-Pakistan forces active in the region. Unless there is sustainable peace in Afghanistan and writ of the state is established in all parts of our neighbouring country, groups like TTP, Jamat-ul-Ahrar, Lashkar-e-Jhangvi Al-Aalami, BLA, BRA, and others will keep flourishing and their activities cannot be completely diminished. Negative role of Afghan government and its National Directorate of Security (NDS) is one of the major impediments in this regard.

Afghan government is not serious in dialogue with Taliban and instead passes the buck on Pakistan for its own ineptness. NDS is involved in patronizing those groups which are active against Pakistani interests. It is believed that NDS is hand-in-glove with Indian intelligence agency RAW in targeting Pakistani interests. There cannot be a bigger manifestation of shortsightedness of NDS that to weaken Taliban insurgents, it kept supporting Daesh in the country. It should have been known to everyone that Daesh would not serve anyone’s interests in the longer run. It carries an agenda of destruction of everyone. Afghanistan or any other country, regional or extra regional forces who thinks they use Daesh for their interests must realize that they are actually being used by Daesh. The group is gradually strengthening its roots in Afghanistan and poses a serious threat to regional security. Its presence will drag more forces into Afghanistan, which is already facing serious law and order situation due to the presence of foreign troops on its soil.

Although operational network of Daesh could not make a point in Pakistan but the group has found some useful local partners such as Lashkar-e-Jhangvi Al-Aalami, Jamat-ul-Ahrar, Lashkar-e-Islam, and Tehreek-e-Taliban Pakistan. Especially, Lashkar-e-Jhangvi Al-Aalami is providing its infrastructure in Balochistan and Sindh to the Middle Eastern group. According to sources, Daesh has an agreement with LeJ-A and other groups that information about certain high profile attacks will be passed on to Daesh to claim responsibility. The attacks on Lal Shabaz Qalander’s shrine in Sehvan Sharif, Sindh and Shah Noorani’s shrine in Khuzdar, Balochistan are prominent examples of such an agreement. Both the attacks were carried out by LeJ-A while responsibility was accepted by Daesh. Objective of such collaboration is to highlight the attacks at international level and put Pakistani government and armed forces under immense pressure. According to a PICSS security report, commanders of TTP, Jamat-ul-Ahrar, Daesh, Lashkar-e-Isalam and Lashkar-e-Jhangvi-Al-Aalami held a meeting in Khost, Afghanistan last year and decided that they will target Pakistan with joint efforts. It was also decided that local groups would pass on information of certain attacks to Daesh to claim responsibility. Certain attacks in Peshawar claimed by Daesh were also actually carried out by the local groups.

The spat of violence in February 2017 resembles the sudden surge in violence in January 2016 when militants carried out suicide attacks against polio workers in Quetta, Khasadar Force in Karkhano area of Khyber Agency, Bacha Khan University in Charsadda and other attacks. However, security forces managed to control the situation and overall violence in 2016 saw a further 27 percent decline in number of attacks and resultant deaths. Average militant attacks per month further dropped in 2016 from 60 to 42 which was 161 before June 2014 when OperationZarb-e-Azb started. During the two and a half years that followed Zarb-e-Azb, the country witnessed 68 percent reduction in militant attacks, 62 percent decline in resultant deaths and 48 percent decrease in injuries. 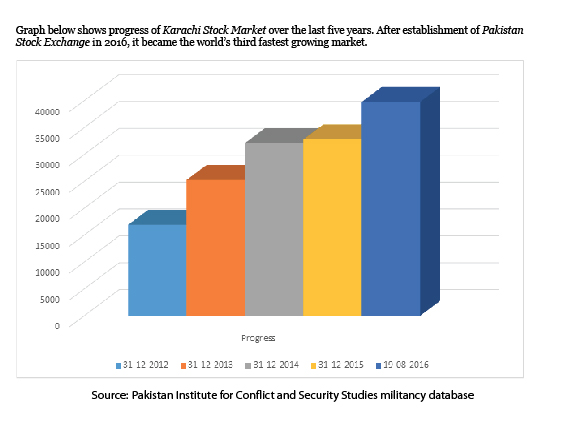 Pattern of violence shows that capability of terrorists to frequently target security forces has significantly diminished due to Zarb-e-Azb and IBOs thus, they have resorted to hit soft targets. Selecting civilian targets create chaos in the society, and creating mistrust between people and the armed forces is one of the objectives the militants want to achieve. One of the major reasons of targeting civilians is to revive financial pipelines of militants. Pakistani security forces have dismantled kidnapping for ransom networks largely, which was providing a major source of income for militants.

Unfortunately, a section of our media is playing a central role in demoralizing the public in the face of terrorism. Despite apparently absolute freedom of expression, in the United States, the media downplays losses in War on Terror. There is an official ban on the coverage of funerals of dead soldiers and media cameras are not allowed in graveyards during these funerals. The objective of such restrictions is to avoid demoralizing public. In stark contrast, we demoralize our public by showing the dead and injured and their funerals, as well as live coverage of terror attacks. It has been pointed out so many times that live coverage of militant attacks should be avoided yet only occasional restraint has been seen in the practice. While analyzing propaganda videos of militants in Pakistan, one notices that a major chunk of material is obtained from video clips of Pakistani TV channels.

It is a long war and despite remarkable successes of Operation Zarb-e-Azb, militant attacks cannot be stopped completely unless some major political and security issues around Pakistan are not resolved. Our security forces will have to remain alert and well prepared to minimize the damage while the public will have to keep its morale up. Pakistan is the only Muslim nuclear state with the most organized Armed Forces, state institutions that function better than many in the region and a major role in regional connectivity through CPEC. Therefore, it attracts a variety of enemies for a number of reasons. We will have to stand up against all threats and cannot lower our guard for a single moment. Pakistan has a bright future ahead and these are testing time for the nation. Let us stand firm against all negative forces that are active against Pakistan.
Pakistan Zindabad!

The writer is Managing Director Pakistan Institute for Conflict and Security Studies. He is an expert on militancy and regional security.