The Quaid and the ‘Inevitable’ Partition of India

Dr. Sikandar Hayat discusses why the partition of India had become inevitable reality and the reasons/circumstances that led to the failure of Cabinet Mission Plan. 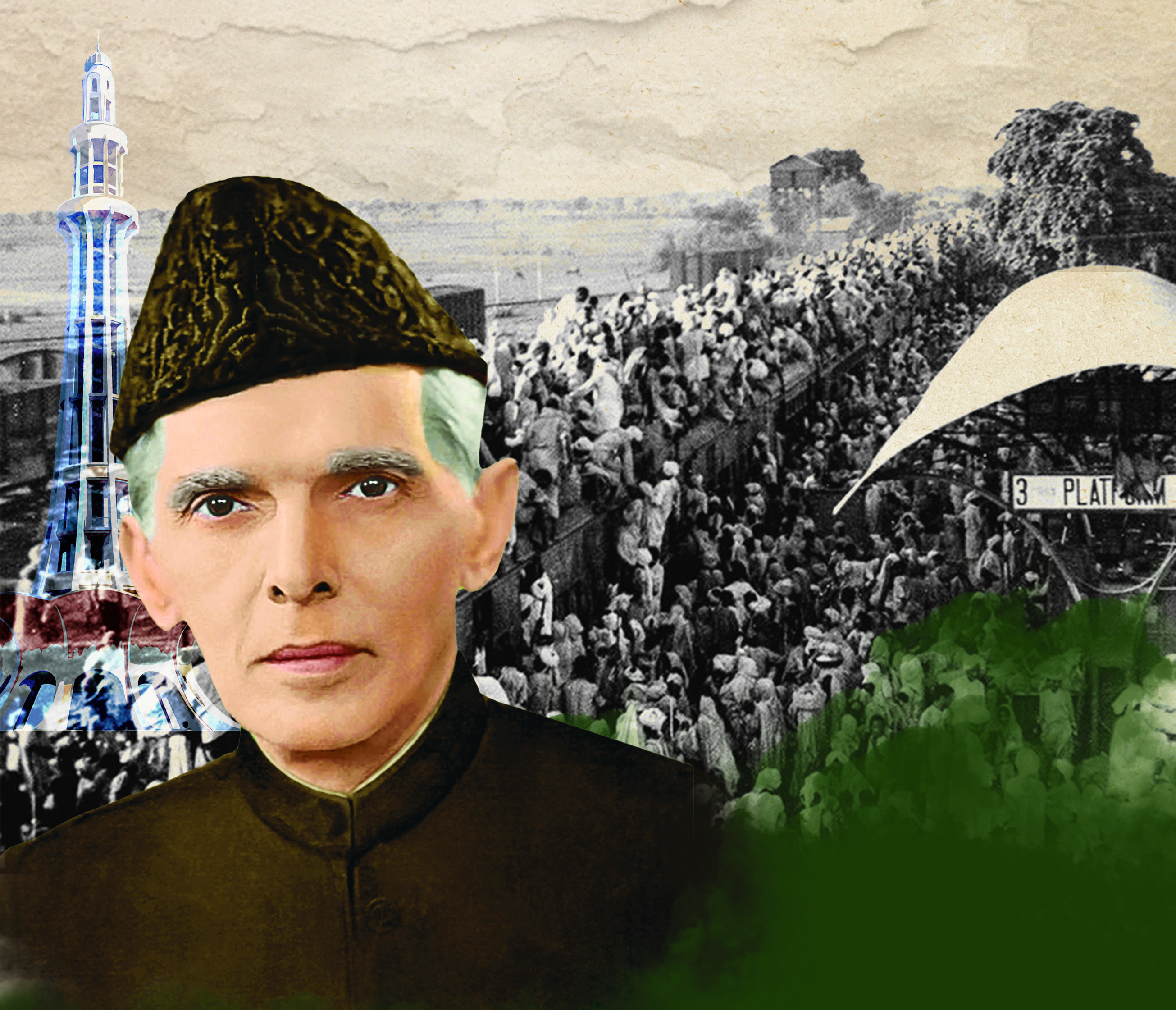 In this brief piece, we will discuss how the partition of India became ‘inevitable’, forcing the British Government to announce on June 3, 1947 (Partition Plan), “The Cabinet Mission Plan [of 1946]… offers the best basis for solving the Indian problem… But, as Indian leaders have finally failed to agree on a plan for a united India, [sic] partition becomes the inevitable alternative”… The British had indeed pinned their hopes on the successful implementation of its May-June 1946 Cabinet Mission Plan, their last politico-constitutional plan to keep India united. We will examine this plan to find out why it failed, the role of Quaid-i-Azam Mohammad Ali Jinnah, and how it led to the inevitable partition of India and the creation of Pakistan. But let us begin with the context of the plan before we explore its contents, their implications and impact for the purposes of our discussion here.
It all started with the All-India Muslim League’s Lahore Resolution of March 23, 1940, demanding a separate homeland for the Muslims to help develop to the fullest their ‘spiritual, cultural, economic, social and political life in a way that we [the Muslims] think best and in consonance with our own ideal and according to the genius of our people’. This resolution, soon called Pakistan Resolution, both by friends and foes, instantly attracted the attention of Muslims all over India.  Confronted by an indifferent, if not hostile, Hindu majority community, ignored by their representative political party, the Indian National Congress, especially during its provincial rule in 1937-39, and stuck at the margins of a system of government based on numbers and, thus, inherently biased in favour of the Hindus, the promise of their separate homeland of Pakistan not only provided the Muslims reassuring anchor, but also significantly showed them the only way freedom from colonial yoke in India would have any meaning or purpose. They would have power, security, and, above all, their future in their own hands. They would be their own masters. Indeed, the demand for Pakistan soon became the symbol of their nationalism, Muslim nationalism, and their ultimate pursuit, objective, and goal.
Both the British Government and the Congress did not accept the Pakistan demand. For the British, ‘the greatest thing we had done during the Raj... was to unify India’. L. S. Amery, Secretary of State for India even went on to claim, ‘I would say, indeed, that if some sort of Indian unity had not existed it would have to be invented.’ He charged that ‘Jinnah and his Pakistanis’ had ‘lost all sense of realities….’ As one keen observer put it: ‘…that their work should end in the division of the country into two separate nations was not something which sincere British officials in India could contemplate without abhorrence. Liking the Muslims or not, he could not swallow their desire for vivisection.’ M. K. Gandhi and other prominent Hindu leaders of the Congress readily agreed, claiming that the partition of India amounted to ‘vivisection,’ that is, ‘cutting the baby into two halves’. But since the British were paramount, defacto rulers of the country, they took it upon themselves to discredit and deny the demand for Pakistan. The Congress did help.
To begin with, the British tried to play smart, keeping Jinnah and the Muslim League on their side during the ongoing Second World War (with the Congress not cooperating) by offering them a bait through the so-called August Offer (August 8, 1940). The British Government stated that it ‘could not contemplate the transfer of their present responsibilities for the peace and welfare of India to any system of Government whose authority is directly denied by large and powerful elements in India’s national life.’ This, of course, did not impress Jinnah for the British did not recognize the Muslims as ‘a nation by themselves’ and entitled to ‘exercise their right of self-determination…’ Thus, while he expressed some satisfaction with the tacit acceptance of the Muslim predicament in India, he did not hesitate to criticize and condemn the offer. The August Offer, nonetheless committed the British to some sort of understanding of Muslim apprehensions as to their future in India. The British could not dismiss the Pakistan demand offhand any more.

The westwards advance of Japan and the precarious war situation forced the British in 1942 to revisit the Pakistan demand. Sir Stafford Cripps arrived in India in March 1942 to persuade the Indian leaders to support the British war effort. Though his visit was primarily meant to win over Gandhi, Jawaharlal Nehru, and indeed the Congress leadership, he could not help meeting Jinnah and keeping him on board. With the Congress non-cooperating and indeed defiant by now, the British were keen to conciliate all the non-Congress parties, especially the Muslim League, the second largest party in the country and, in fact, most representative organization of Muslims. The support of the League was important to the British militarily as well. The Muslims, in spite of being a minority community (never more than 15 percent of the population) contributed heavily to the army, 37.65 percent soldiers against 37.50 percent contributed by the Hindus.
Aptly dubbed as Cripps Proposals, Cripps offered an ‘immediate and effective participation’ of the Indian political leaders in the ‘counsels of their country,’ though in a limited sense. The ‘defense of India’ during the war and until the new constitution was framed, was to rest with the British Government. As for the Muslims’ demand for Pakistan, Cripps proposed the idea of provinces opting out of union through a non-accession clause. This clause was to take effect only when the Muslims and the Congress could not settle the constitution based on a United India among themselves. But, the right of option was not entrusted to the Muslims. In the case of the vote of the whole province, comprising both Muslims and non-Muslims, the British knew very well that the ‘situation proposed in Cripps offer practically amounted to rejecting the Pakistan claim since the League could not obtain necessary majorities in Bengal and Punjab’. Jinnah, of course, was disappointed. “So far as the Pakistan demand is not agreed to”, he declared, “we cannot agree to any present adjustment which will in any way militate against or prejudice the Pakistan demand”. He was not prepared to play the game with a loaded device.
Still there was no denying that the Cripps Proposals conceded some recognition of the principle of partition, though a remote possibility. Henceforth, partition and Pakistan went on to increasingly become the dominant issue of politics in India, till the arrival of the Cabinet Mission in 1946. In the meanwhile, the Muslim League went on to overwhelmingly win the 1945-46 elections, winning 444 out of 494 Muslim seats in the provincial assembly elections and indeed sweeping all thirty seats in the Central Assembly.
It was this context, this historical backdrop that brought the Cabinet Mission, comprising three eminent members of the British Cabinet, Pethick-Lawrence, Stafford Cripps, and A.V. Alexander to India on March 24, 1946 to help solve the Indian problem, particularly the Pakistan demand, voted upon and validated by the bulk of the Muslim community in 1945-46 elections.
Among other prominent leaders, such as Gandhi and Nehru, the Cabinet Mission met Jinnah more than once. But right at the outset, they told Jinnah to choose between his sovereign Pakistan essentially restricted to the Muslim-majority areas and a larger Pakistan which would come into [sic] a federal nexus…. Cripps even warned him, “We could not press [the] Congress to accept anything more than what we might call a smaller Pakistan.” Pakistan could only mean Baluchistan (now Balochistan), Sind (now Sindh), the North-West Frontier Province (NWFP, now Khyber Pakhtunkhwa), and West Punjab in the northwest, and East Bengal and Sylhet in the east. There was no way he could get larger areas within Pakistan including all the Punjab and Bengal. Cripps, indeed the entire Mission, was convinced that the idea of a smaller, though sovereign Pakistan, would not appeal to him. Jinnah would accept a larger Pakistan, federated with India, the country would remain united.
Eventually, unwilling to accept the division of the Muslim-majority provinces of the Punjab and Bengal, Jinnah agreed to the idea of an Indian Union. However, he insisted that all the six Muslim-majority provinces of India, that is, the Punjab (undivided), NWFP, Baluchistan, Sind, Bengal and Assam must constitute a Pakistan Group, and there must be a separate constitution-making body to frame constitution for this group and each one of the provinces in this group. Only after these constitutions were ‘finally framed by the constitution-making body, it will be open to any province of the group to opt out of its group, provided the wishes of the people of that province were ascertained by a referendum to opt out or not’. But since these demands were not acceptable to the Congress leaders who, above all, sought one all-India Constituent Assembly to hold Indian union together and tight, there was a complete stalemate. The mission could not proceed further. Indeed it was left with no options but to offer its own plan. The two statements of May 16 and June 16, 1946 together constituted the now better-known Cabinet Mission Plan.

The Muslim League went on to overwhelmingly win the 1945-46 elections, winning 444 out of 494 Muslim seats in the provincial assembly elections and indeed sweeping all thirty seats in the Central Assembly.

The writer is Dean of the Faculty of Social Sciences at FC College University, Lahore. He is author of the award-wining book, The Charismatic Leader: Quaid-i-Azam Mohammad Ali Jinnah and the Creation of Pakistan (OUP, 2008, 2014/2018) and the more recent, A Leadership Odyssey: Muslim Separatism and the Achievement of the Separate State of Pakistan (OUP, 2021).