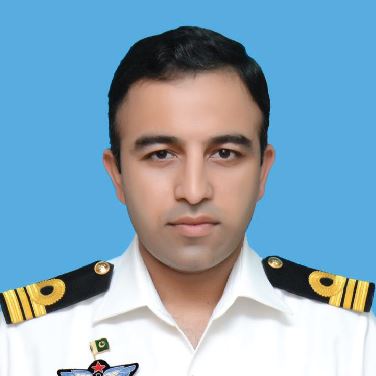 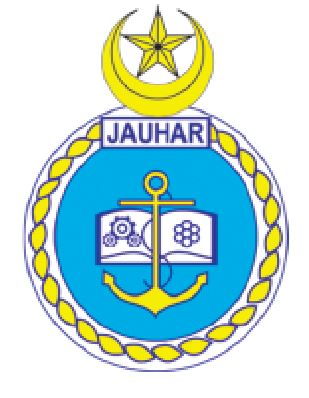 Pakistan Navy Engineering College (PNEC), being a constituent college of National University of Sciences and Technology (NUST), undertakes many activities in addition to the classroom instructions and labs. One such category of activities is that undertaken by various student societies, which are an essential part of any university campus. The main aim of the student societies is to develop communication, organization, and leadership skills among the students. Societies promote teamwork and social ethics, development of new skills and abilities, exploration of new talents, and aid in the development of the core objectives of a degree program. These societies participate in international competitions against other teams from around the globe.
Formula Electric Racing-NUST: Tesla Sponsorship
Formula Electric Racing-NUST (FERN) is a formula student team from (PNEC) NUST which has been working in electric propulsion since 2016. It has had the unique honor of representing Pakistan in five Formula Student competitions, has gained the only podium place finish for any Pakistani team and is the first team to work on a driverless vehicle in Pakistan.
Taking a major stride forward, FERN has earned technical sponsorship by Tesla, one of the most valuable automotive brands that is accelerating the world's transition to sustainable energy with electric cars, solar and integrated renewable energy solutions and so on. Tesla awards this sponsorship to Formula Student teams from around the world, and FERN is the first and only team from Pakistan to have been conferred this award.
Team Envision PNEC-NUST
Team Envision is a team of undergraduate engineering students founded in 2009 to revolutionize the automobile industry by designing and fabricating highly fuel-efficient vehicles.  Every year, Team Envision competes in the Shell Eco-marathon Asia, an international competition. They are the only Asian team to win three communication awards, as well as three technical innovation awards, among various other achievements.
The vehicle Evo-X, their latest iteration having a mileage of 200km/kwh, is all set to participate in Shell Eco-marathon Asia 2023 and to achieve the highest positions in the competition.
NUST Rocket Team
NUST Rocket Team is Pakistan's first and largest student rocketry team to manufacture the first-ever student-built experimental sounding rocket named "Project Raftaar" in the history of Pakistan. It is expected to reach an altitude of 10,000 ft above ground level. The vision of our body is to empower the youth by promoting space science culture and making Pakistan a competitor in the global space industry. 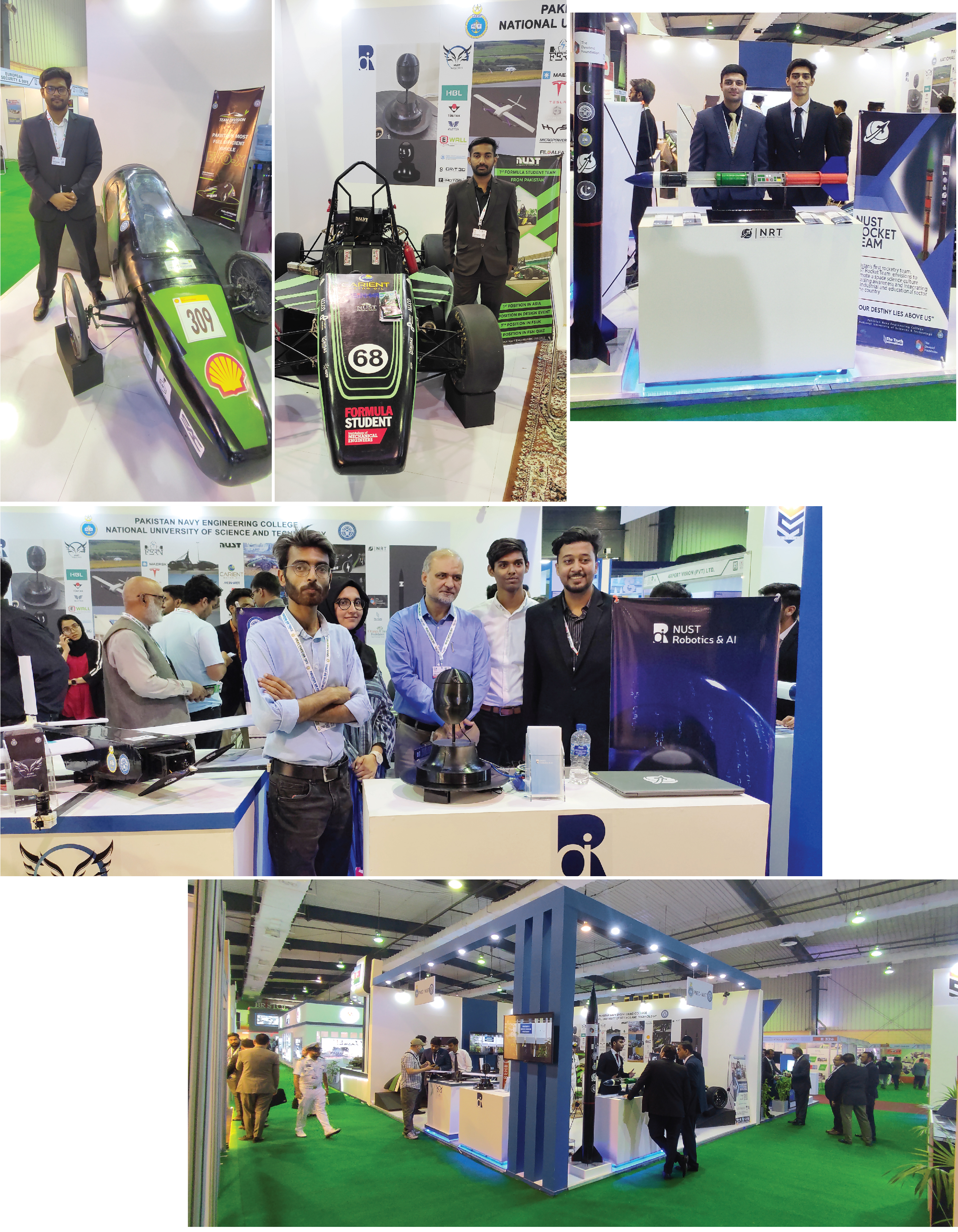 NUST RAI
NUST RAI is a team of undergraduates from PNEC who design and manufacture completely autonomous robots to promote Robotics and Artificial Intelligence (RAI) culture in Pakistan. It is a competitive society that has within a year of its initiation:
• Achieved second position in the fire-fighting module at RoboFiesta 4.0, a national-level robotics competition conducted at HITEC University, Taxila.
• Organized TechnoSquid’22, a multi-module competition attended by over 200 participants from universities all over Karachi.
• Designed and manufactured CY, a conversational humanoid robot built to interact with humans for aid, entertainment, guidance, and recreation, entirely subsidized by the Pakistan Navy.
NUST Airworks
Team NUST Airworks is a student team based in NUST-PNEC which designs and manufactures fully autonomous drones. The team has been competing on the national and international stage since 2016, representing Pakistan at the UK's IMechE UAS Challenge, one of the most prestigious international university-level drone competitions. The team has won ten awards in four years. 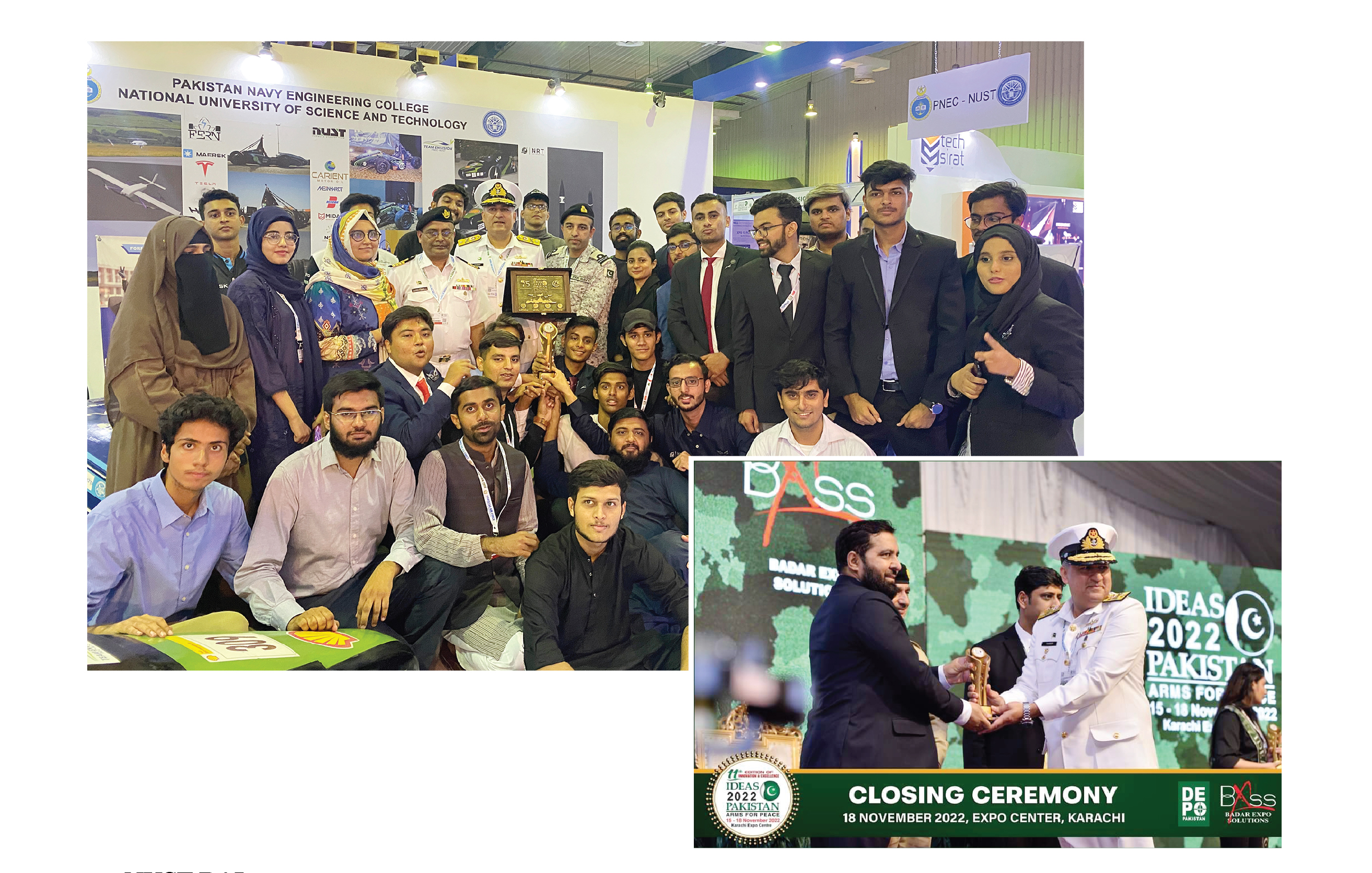 This year, NUST Airworks participated in Teknofest-2022 with its highly innovative decentralized swarm of drones deployed for search and rescue missions. The final competition round took place on August 14, where the team established a captivating green-and-white presence by achieving a top 20 finish out of 96 international teams. The primary focus of the team’s current project is to make it as economically feasible as possible and take Pakistan a step ahead in the field of drone technology.
IDEAS-2022
These teams of NUST-PNEC exhibited their projects at IDEAS-2022 held at Expo Center, Karachi. The national and international audience showed their interest in these projects and appreciated the efforts and work of the students. In conclusion, the stall of NUST-PNEC was declared the most decorated stall in “less than 50 square meters” national category.