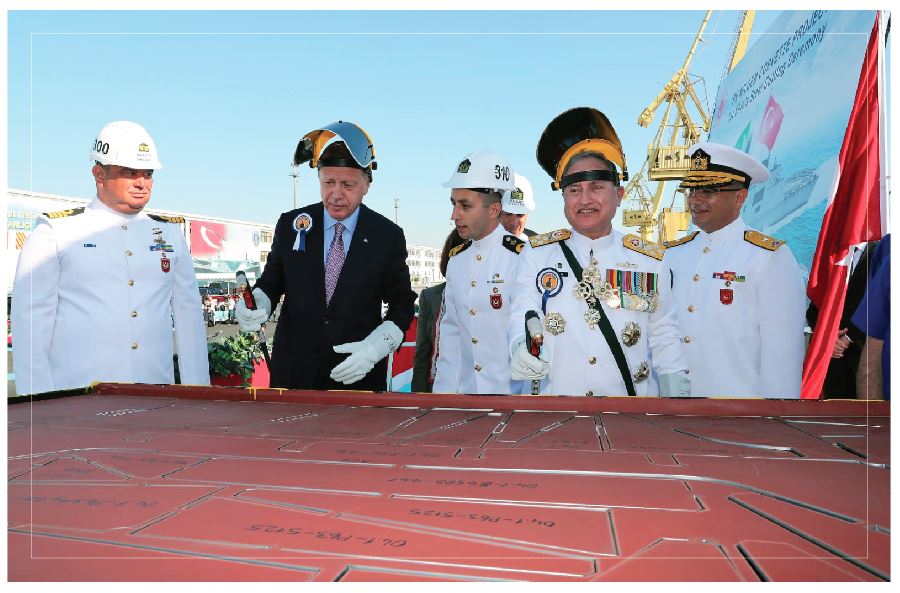 Vice President of Turkey Fuat Oktay, Minister for National Defence of Turkey Hulusi Akar, Chief of Turkish General Staff General Yaşar Güler, Commander of Turkish Naval Forces Admiral Adnan Özbal, Ambassador of Pakistan to Turkey Muhammad Sajjad Qazi, and other dignitaries attended the ceremony which also included the induction of newly built TCG Kinaliada, the fourth MILGEM Class Corvette, into the Turkish naval fleet.
In his address, President Erdogan termed the brotherly Pakistan-Turkey relations as exemplary and said that great potential exists for collaboration between the two countries in the field of defense production. While highlighting the situation in Indian-occupied Jammu & Kashmir, he said that the world needs to know about the sufferings of the Kashmiri people. Equating Kashmir with Palestine, the President further said that over 8 million Kashmiris are living in an open-air prison in their own lands, facing brutalities at the hands of occupation forces with great courage.
Earlier, in his opening speech, the CNS termed this project as another testimony of the two countries’ brotherhood. While updating the audience about the situation in the Indian-occupied Jammu & Kashmir, he mentioned the toxic Hindutva ideology of India and the threat it poses to regional and international peace. The CNS stated that Indian brutalities have reached new levels after the August 5, 2019 illegal actions of the Indian government which are in contravention to the UN Security Council resolutions. Admiral Abbasi thanked President Erdogan for raising the Kashmir issue in his address at the United Nations General Assembly in New York, saying the people of Pakistan and Kashmir are indebted to Turkey for its steadfast support.
CNS also acknowledged the commitment and dedication of Askeri Fabrika ve Tersane İşletme, Military Factory and Shipyard Managements (ASFAT) team and expressed gratitude to the Turkish Ministry of National Defence and Turkish Navy for the support extended by them in this important program.
Once constructed, the MILGEM Class Corvettes will be one of the most technologically advanced surface platforms of Pakistan’s naval fleet, fitted with the latest weapons, sensors, and command and control systems. These ships will significantly contribute in enhancing Pakistan Navy’s capability in maintaining peace and security in our area of responsibility.