Lessons from the Pandemic

Every once in a while, a new technology, an old problem, and a big idea turn into an innovation.”
We’ve all grown up memorizing poems and proverbs in school, and while we don’t usually credit them at the time, over the years we tend to realise that the reason these age-old proverbs are taught to every generation is simply because, for the most part, they ring true.
One such proverb that we are all familiar with is ‘necessity is the mother of invention,’ but if we were to expand it, we could also say that experiencing that necessity can also lead to invention. Here are more than a few examples of how enterprising Pakistanis have turned experience and need into inventions and projects that could prove to be not just beneficial for our people, but also serve as profitable products that could earn Pakistan some much needed foreign exchange along with promoting domestic economic growth.

In 2015 a young man named Awais Azhar was driving his motorcycle on the Islamabad-Lahore motorway when he met with an accident. All alone and in the middle of the night, Awais hit his head on the ground and lost consciousness. Coming to his senses many minutes later, a groggy Awais contacted his friends and family who came to his rescue. What would have happened had he not woken up? If he had been badly injured and no one had even known? Being engineers, Awais and his friends decided to work out a solution that could potentially save the lives of others like him… and three years later ‘Helii’ – the smart helmet came into being. Setting up a company called ‘Let’s Innovate’, Ali Syed, Awais Azhar, Syed Abdullah and Waqas Khalil designed a helmet with a built-in GPS service that immediately calls rescue services and next-of-kin when it detects an accident or impact. Not only that, the back of the helmet is also equipped with a brake light and indicators that activate when the user hits the brakes or uses turn indicators, leading to greater visibility by others on the road. It also has Bluetooth connectivity, which allows the rider to make and receive calls without actually having to handle a phone – another cause of traffic accidents. A dashcam is positioned in front of the helmet with a heartbeat sensor built into it. Now, the people at Let’s Innovate have also made a bicycle helmet with similar features, and the kids version can alert parents as to where their child is at all times while riding his or her bike. This feature also has commercial applications, as companies that rely on bike-riding delivery men can also track the whereabouts of their riders.

GOBEE – The Voice Activated Wheelchair
It was personal experience that led to the development of this product as well. Faaiz Arbab, founder and CEO of Ayub Yaqoob Engineering pvt limited, recalls the inspiration as having come from when his aged grandmother fell down and fractured her leg and pelvic bone. Confined to a wheelchair, she found herself dependant on caretakers to move her around – something she had previously been able to do on her own. Being an engineer, Faaiz started to think of a solution and that solution was ‘GOBEE’ – Pakistan’s first voice activated and controlled wheelchair.  It is powered by Apple’s Siri software and Google voice and can not only respond to pre-programmed commands like ‘go forward’ and ‘go left’ etc. but can also understand commands given in other languages, such as Urdu, which are transliterated into English. GOBEE can also be remote controlled from a smartphone from over a range of 100 feet wirelessly. It has a top speed of 18km per hour and it can run for 25kms per charge and can even be programmed with pre-set destinations, allowing it to respond to commands like ‘go to the bedroom’. Speaking to the Express Tribune, Faaiz said, “The cheapest smart wheelchair available is made in China with a price tag of Rs. 145,000. On average, a smart wheelchair is available between Rs. 200-250,000. We are selling GOBEE for Rs. 100,000 with additional features such as a long-lasting battery, onboard mobile charger and voice control.”
GOBEE has now officially been launched in the local market and has already won the Best Consumer Product Design Award (2018) at the National Design Awards (NDA) Pakistan.

The TAME Sleeve
This project, which can bring dignity and the chance to live a normal life to millions, is the brainchild of Awais Shafique, Hooriya Anam and Muhammad Arsalan Javed, NUST students who are working under the supervision of Dr. Syed Muhammad Raza Kazmi. Once again, the idea for this product came from personal experience. Some of the team members had relatives who suffered from extreme tremors – involuntary shaking of the hands – which reached such a level that they were unable to clothe or even feed themselves without help, let alone operate machinery such as cars and so on. Upset at seeing this, and the kind of effect it had on those suffering from it, the team came up with a sleeve that can control such tremors by adjusting to the shaking of the hands or arms. TAME stands for ‘Tremor Acquisition and Minimization,’ and is ‘the world’s first wearable device for pathological tremor categorization and real-time suppression’. It can also be connected to cloud storage for the management and sharing of diagnosis files.

Watermelon Vs. Arsenic
Contamination of our scarce water resources by arsenic is a pressing problem; according to one report, up to 50 million Pakistanis are potentially at risk of arsenic poisoning from contaminated groundwater, largely caused by the indiscriminate pumping of water from the country’s underground aquifers. Globally, arsenic poisoning from drinking contaminated groundwater affects about 140 million people in 50 countries and an estimated 43,000 people die of it annually, according to the World Health Organization (WHO). Many solutions have been sought, some expensive and unfeasible for poorer nations, and some that seemed promising but yielded no tangible results. Now, a Pakistani scientist has come up with what could be a low-cost and workable solution… by utilizing watermelon rinds. Dr. Nabeel Khan Niazi from the University of Faisalabad has co-authored a paper that claims that treated watermelon rind can be used as a simple and cost-effective way to remove arsenic from water.
While several methods of ridding water of arsenic have been devised, cost has been a determining factor in actual deployment. The researchers, who published their findings in the July issue of the journal Science of the Total Environment, claim that their watermelon rind technology is among the cheapest developed so far.
“Watermelon rind is free. It’s basically bio-waste produced abundantly in Pakistan,” says Dr. Nabeel Khan Niazi.
Treating watermelon rind with Xanthate salts – which attract and bind arsenic – produced a filter they claim is capable of removing arsenic from 95% of water samples taken from across Pakistan and a prototype filter produced by the team is said to be capable of processing about 20 liters a day and can last around 6-8 months. While traditional filters can cost around USD200, these filters cost around USD32. His team won funding from Grand Challenges Canada in 2014 to develop the technology and they have currently applied to the HEC for the development and commercialization of filters. 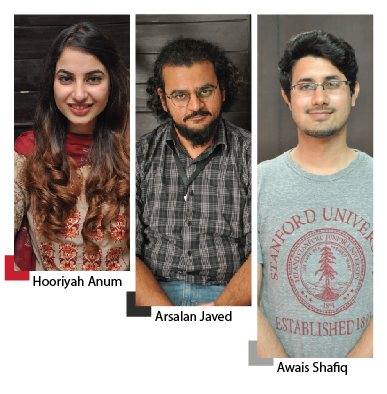 Bioniks
Mir Bayyan was born without his right forearm, and his parents worried whether he would be able to fit in among other children and have a normal life. But when he was five years old, a small miracle took place as his story made its way to Ovais Qureshi and Anas Niaz, the co-founders of Bioniks – a small Pakistani firm that prints low-cost 3D prosthetic limbs. Using an Xplorer 3D printer and an open source design provided by the UK’s Team Unlimbited, they made a prosthetic arm for Mir Bayyan that looked like that of his favourite superhero Iron Man! But that’s not all, the latest models of the Bioniks prosthetic limb can actually be controlled just like you or I can control our hands and limbs – simply by thinking about holding a glass, our nervous system sends a message to our muscles allowing us to perform this task. Now, the Bioniks prosthetic limbs can also do this and Mir Bayyan – along with many others like him – can also live a normal life.
While such products are available in the international market, Bioniks is capable of producing them at relatively low cost, sourced from locally available materials. They are also working on creating prosthetic limbs for animals and are also able to provide personalized 3D models for surgical planning or medical case studies.

Synthetic Biology
For the last two years, Pakistani students have made a name for themselves at the International Genetically Engineered Machines (iGEM) contest held in the city of Boston in the United States. The concept of this competition is to utilize synthetic biology – defined as ‘the artificial design and engineering of biological systems and living organisms for purposes of improving applications for industry or biological research.’ In short, to make products that use nature and meld it with machinery to achieve tangible objectives.

In 2016 a team from iGEM Peshawar participated in this competition and got a bronze medal for their project, which was to design a biological sensor that can detect harmful pollutants in the atmosphere – a major concern in Pakistan especially if we consider the dangerous smog that engulfs large parts of this country every year.
The team came up with a plan that used ‘engineered’ bacteria that could detect Carbon Monoxide and Nitrous Oxide and change colours when it detected these noxious gases. In theory, these could be placed on strips that could then be used to test vehicle emissions on the spot and also detect pollution levels in the air.
The 2016 team consisted of five girls and seven boys from across the country, including Karachi, Hyderabad, Lahore, Kalat, Swat, Waziristan, Mardan and Peshawar. The project was sponsored by the Directorate of Science & Technology Khyber Pakhtunkhwa and was supported by CECOS University, under the supervision of Dr. Faisal Khan, principal investigator and iGEM team supervisor who is also the Director of the Institute of Integrative Bio-sciences at CECOS University, Peshawar.
In 2017, another team from iGEM Peshawar participated in the competition and this time they came away with a silver medal for their project which envisaged using genetically modified fish to detect pollutants in the water.
These are just a handful of projects and startups that have been listed here, but Pakistan’s youth are capable of doing much more, and with the proper support and resources, there is no reason why such innovations and innovators cannot lead the charge into Pakistan’s future.

The writer has worked extensively in Pakistan's print and electronic media and is currently hosting a talk show on a private TV Channel.
E-mail: [email protected]

Lessons from the Pandemic