Soft Launch of 11th Edition of IDEAS-2022 Held at Islamabad

11th soft launch ceremony for International Defence Exhibition and Seminar (IDEAS)-2022 was held at Marriott Hotel, Islamabad on August 11, 2022. On the occasion, Federal Defense Minister, Khawaja Muhammad Asif expressed, “I wish the organizers of this event success in the conduct of IDEAS and look forward to an overwhelming participation from defense industries from inland and abroad. It is indeed a matter of great pleasure to see the IDEAS gaining prominence with every passing year, over a span of twenty-two years.” 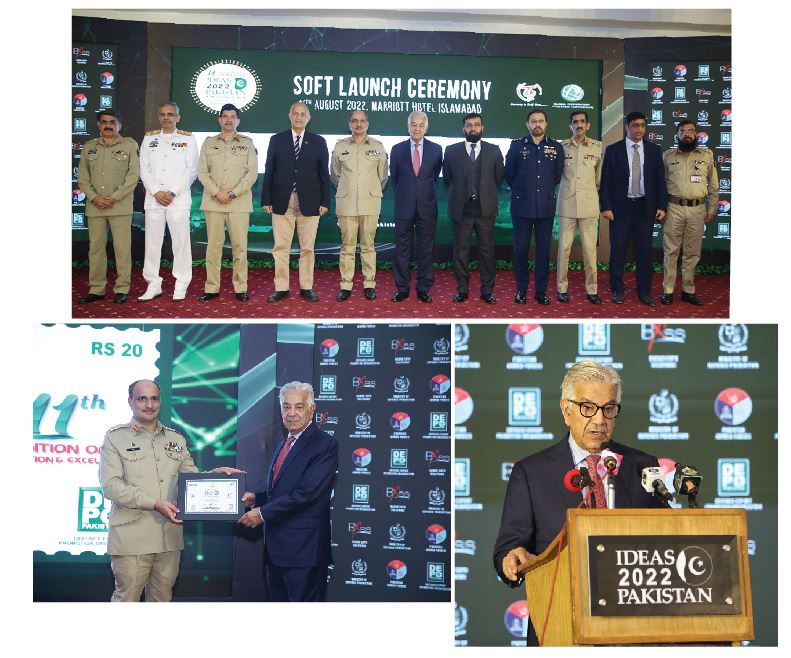 Towards the end of his address, the Minister for Defense formally declared the launching of IDEAS-2022. Upon arrival at the venue, he was received by Secretary Defense Production, Lieutenant General Humayun Aziz (R) and Director General Defense Export Promotion Organization (DEPO), Major General Muhammad Arif Malik.
DG DEPO in his welcome address stated that the 11th edition of IDEAS is planned to be held at Karachi Expo Centre from November 15-18, 2022, the year of 75th celebration of Independence of Pakistan. He added that despite a gap of four years, more than 70 percent of the available space has already been booked by the exhibitors from inland and abroad and hoped that IDEAS-2022 will be substantial in size and stature than ever before. The ceremony was attended by the Ministers, Federal Secretaries, large number of Ambassadors, High Commissioners, senior military and civil officials, CEO Badar Expo Solutions, the Event Manager of IDEAS-2022, and representatives from the media and business community. The ceremony was followed by unveiling of a commemorative postage stamp by the Federal Minister, which was issued by Pakistan Post on August 14, 2022, signifying the holding of 11th edition of IDEAS in the 75th year of independence of Pakistan.