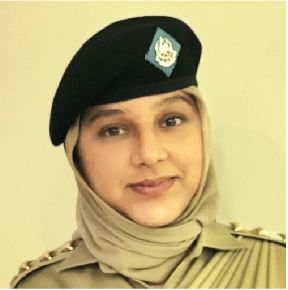 Pakistan Military Academy (PMA) is the premier training institution of Pakistan Army. The institution is entrusted with the provision of future leadership to our land forces. Shortly after partition (post-independence), PMA was established at the hilly station of Abbottabad, at Kakul. Initially, the academy had four cadet companies, namely: Khalid, Tariq, Qasim and Salahuddin, grouped under 1st Pakistan Battalion, also known as “Quaid-e-Azam’s Own”. 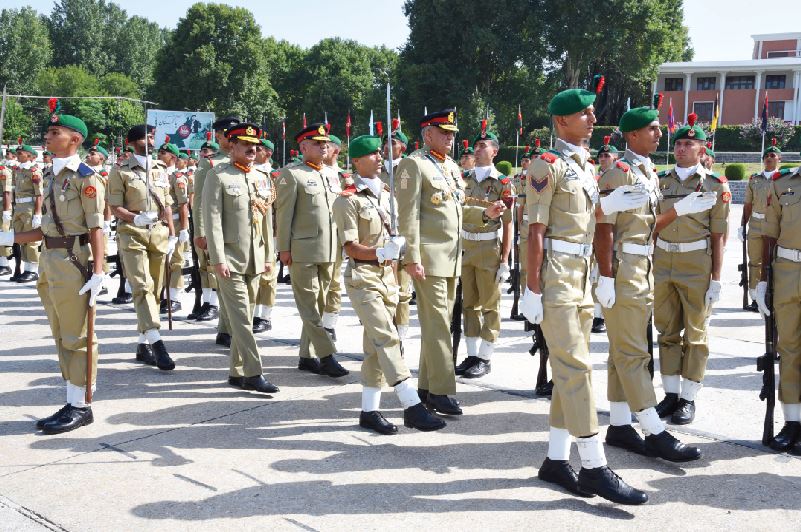 It is military culture and standard procedure to officially recognize installments of fresh Regiments or Battalions with the Regimental Colours award by state dignitaries or military leadership. In the same vein, 1st Pakistan Battalion was awarded Regimental Colours back in 1950 by the then Prime Minister Nawabzada Liaqat Ali Khan.
Regimental Colour is an icon of unique identification, a symbol of unification for common purpose and is regarded as a matter of respect and honor by its flag bearers. This instills esprit de corps, regimentation and reinforces military brotherhood, which enhances the overall efficiency of military outfits in training and war. 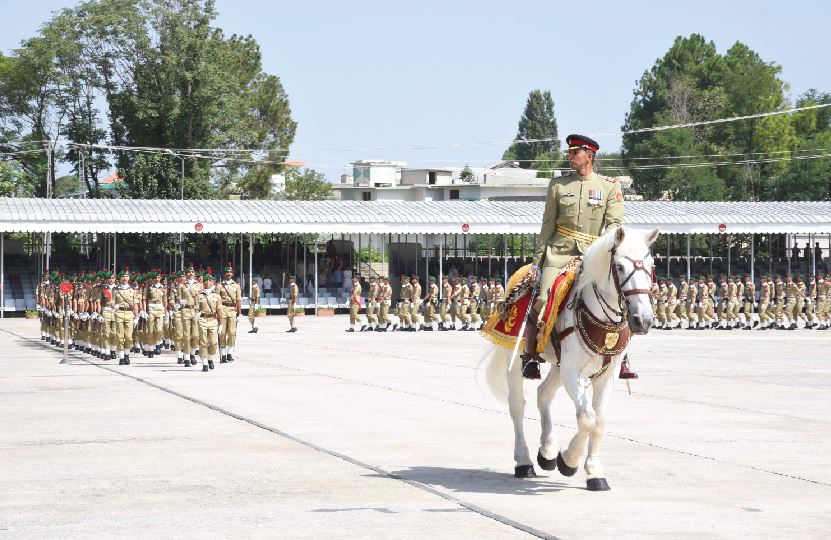 Progression and the resultant requirements of Pakistan Army kindled gradual and periodic installments of new cadet battalions at PMA. History witnessed the inclusion of 2nd Pakistan Battalion and 3rd Pakistan Battalion at PMA to cope with the growing demands of field formations. These battalions were awarded with their Regimental Colours by then Chiefs of the Army Staff, General Tikka Khan, and General Pervez Musharraf, in 1973 and 1999 respectively.
General Qamar Javed Bajwa, Chief of Army Staff (COAS), visited Pakistan Military Academy (PMA) Kakul, on August 20, 2021. He reviewed the Flag Presentation Parade as the Chief Guest and awarded Battalion Standard to 4th Pakistan Battalion which was raised on October 10, 2016 to meet the growing requirements of Pakistan Army.

Key Areas: COAS’ Speech
COAS delivered one of the most important policy speeches covering the challenges/opportunities and Pakistan’s response during his visit to PMA.

•   Today’s Pakistan is strong and progressing well despite living in turbulent times.
•   Our vibrant and industrious youth is our pride and asset. Quaid’s faith, unity and discipline are the guiding principles for our youth. Till the time we are united, no one can harm us.
•  After independence we not only withstood socioeconomic and other challenges, but also defeated terrorism and defended the motherland.
•  Pakistan desires peace and progress in the country and the region.
•  He spoke in detail about the Afghanistan situation, Pakistan’s efforts, the future course of action and the role of spoilers.
• Pakistan’s sincere efforts to promote and support the Afghan process manifests our vision for a peaceful, economically integrated and prosperous region. We have unambiguously and repeatedly asked the global community to play its part in an inclusive and unbiased Afghan process as well as economic sustenance of Afghanistan. Pakistan has paid a huge price for the instability in Afghanistan. Despite Pakistan’s own economic challenges, Pakistan has hosted over 3 million Afghan refugees for more than four decades.
•  Pakistan will continue to play its role for the peace and stability in Afghanistan direly needed for the entire region and in particular our Afghan brethren. We expect that Taliban will fulfil promises to the global community of women and human rights and the Afghan territory won’t be used against any other country.
•  COAS particularly recalled the plight of people of IIOJ&K due to Indian state repression who are under the worst military occupation in human history. He said that our hearts beat with the Kashmiri people and we will always continue to stand with them. Regional peace will remain elusive without a just and peaceful resolution of the Kashmir issue.
•  Referring to collective freedom struggle against imperialism by the leaders, COAS said that the people of the subcontinent must not forget that the ultimate goal was to secure an independent, harmonious and prosperous region wherein all newly created countries could live peacefully.
•  Unfortunately, those goals today have become hostage to increasing polarisation and radicalisation in our neighbourhood. Inimical forces are trying to weaken our society and state through hybrid war. Pakistan Army is fully cognizant of these challenges and is prepared to tackle them.
•   We will ensure the country’s defence by focusing on core competencies and technology. Only strong Armed Forces can guarantee the defence of the motherland. 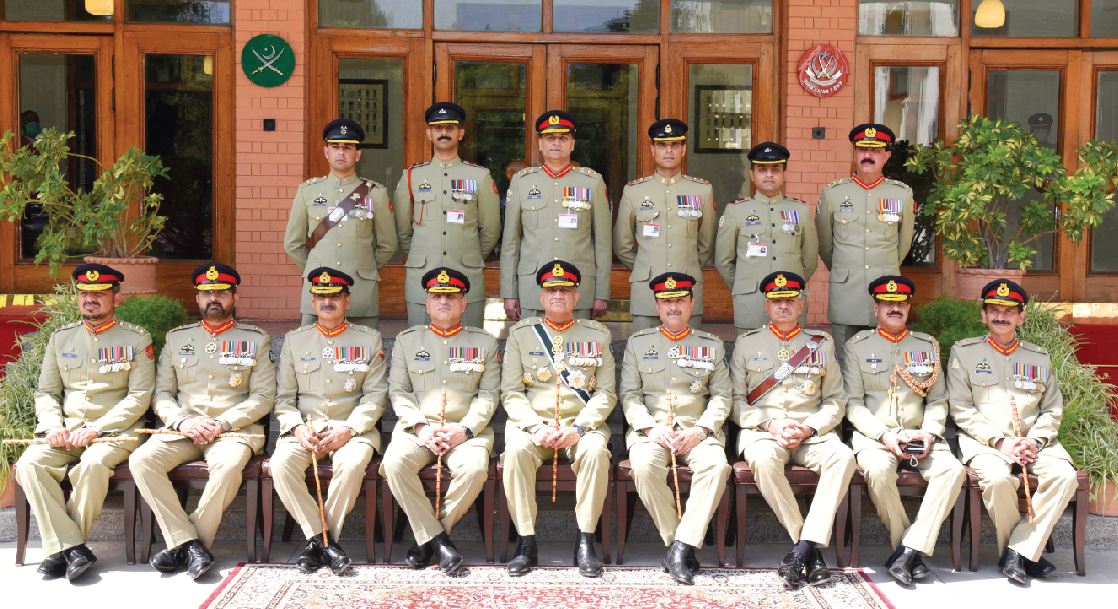 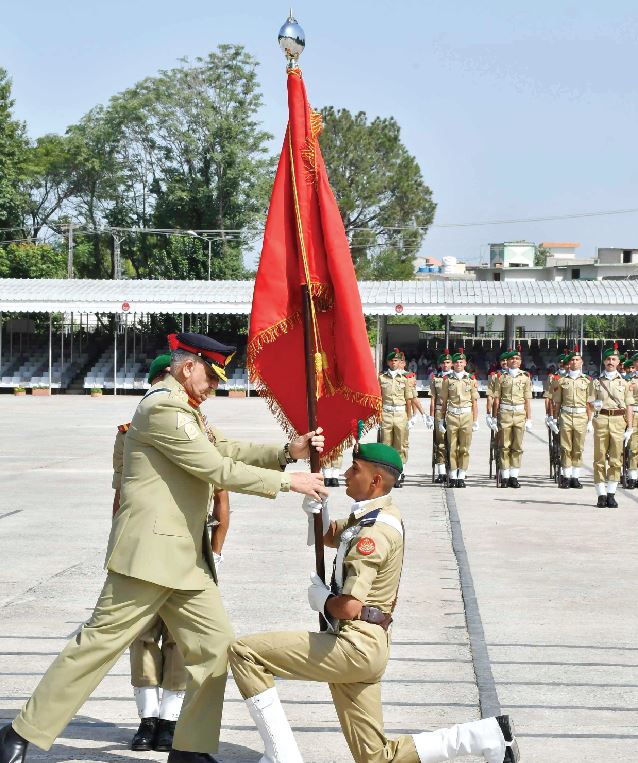 The reviewing dignitary was received by Commandant PMA, General Omer Ahmed Bokhari, to witness the smart and elegant display of drill by the cadets of 4th Pakistan Battalion.
Later, addressing the faculty and cadets, COAS lauded PMA’s role as the premier training institution of Pakistan Army and commended the faculty and staff for maintaining high standards of training and grooming the young leaders that form the backbone of Pakistan Army.
Dilating upon the future challenges in the view of changing dynamics of warfare, COAS advised the cadets to wholeheartedly focus on training and remain abreast with the latest advancements in technology to prove equal to the task. He said that Pakistan Army is proud of its young officers who continue to lead their men from the front with courage and devotion to defend the freedom of the motherland.