Acknowledges the Contribution of Security Forces Towards Peace and Development 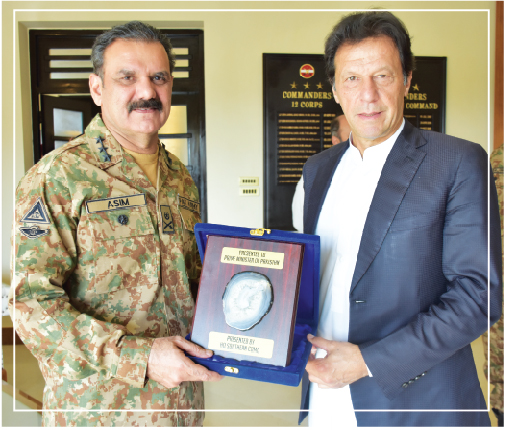 Prime Minister Imran Khan along with Chief Minister Balochistan, Jam Kamal Khan and federal ministers visited Headquarters Southern Command at Quetta Cantt on October 6, 2018. Chief of Army Staff (COAS) General Qamar Javed Bajwa received the PM at Quetta Air Base. A detailed briefing on security situation of the province, challenges and response was given. PM was also briefed about Khushal Balochistan – a socio-economic development program, security of the CPEC projects and the progress of fencing along the Pak-Afghan border.
COAS stated that having achieved stability in troubled areas of KP, focus has been on Balochistan, which is the economic future of Pakistan.
PM acknowledged and appreciated contributions of security forces towards improving peace, stability and socio-economic development of the province. He said that through a comprehensive national effort, cooperation between federal and provincial governments and the assistance of Pakistan Armed Forces we shall realise the true potential of Balochistan. The PM further added that only a cohesive national effort would take provinces and the country to the rightful destination of peace, progress and prosperity.