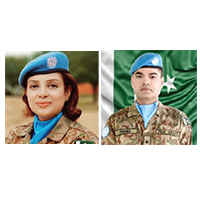 What is “Admiyat”? Respect for man! Learn to appreciate the true worth of man.

Peacekeeping has proven to be the most successful, flexible and yet dynamic tool available to United Nations in assisting the host countries and steering the difficult path from conflict to peace. United Nations Peacekeeping encompasses a range of various types of peacekeeping operations in three continents. Today's multifaceted peacekeeping operations are called upon not only to perpetuate peace and security, but also to promote the political process, protection of civilians, protection and promotion of human rights and succour in restoring the rule of law. 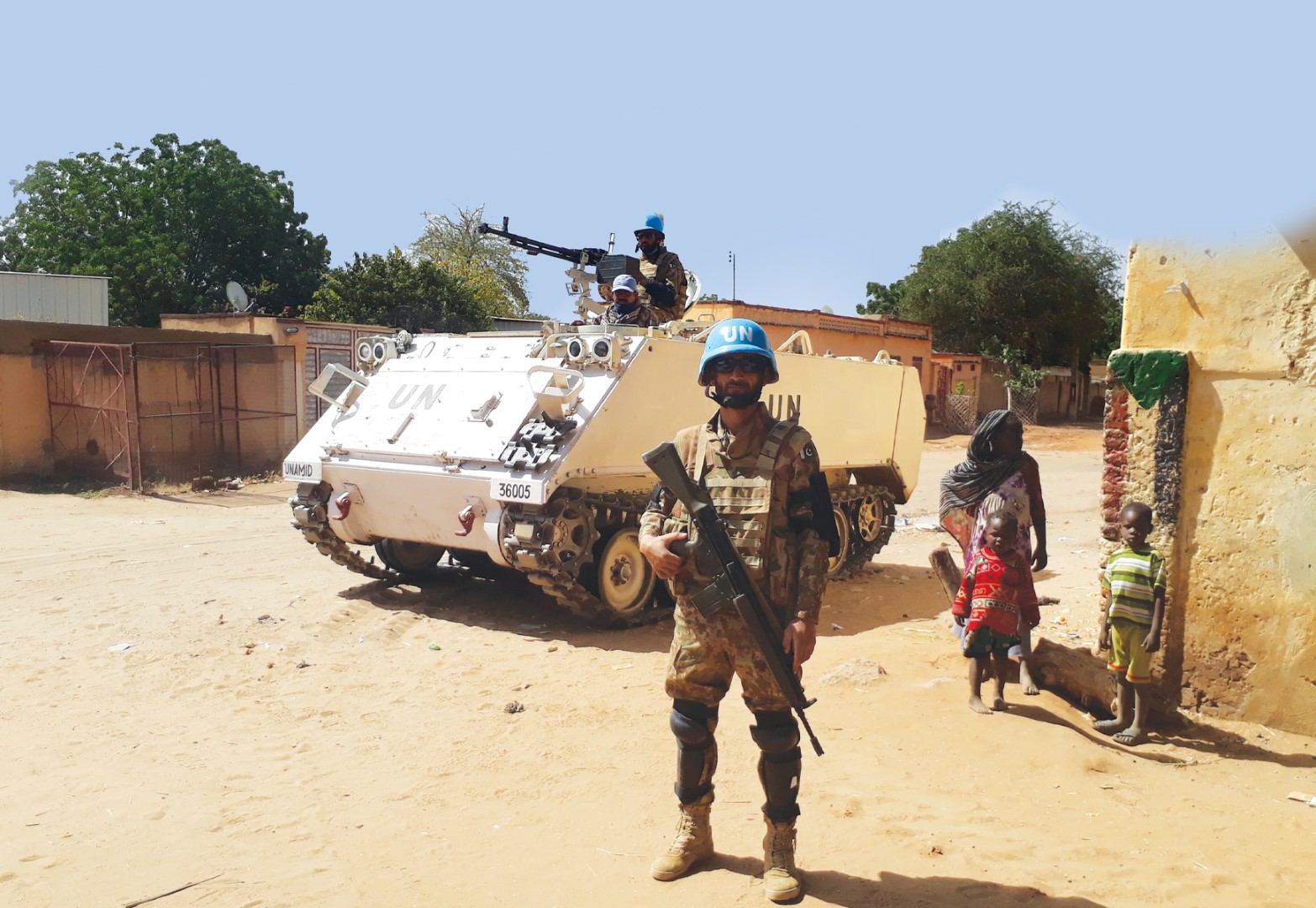 Over 128 countries across the globe are contributing in troops, police and civilian personnel for peacekeeping and peace building operations of United Nations.
Pakistan has a long, cherishable and glorified legacy of serving under the Blue Flag. The very roots of our commitment for promoting international peace and security stems from the vision of our Founding Father Quaid-i-Azam Muhammad Ali Jinnah.  Pakistan joined the United Nations soon after its independence on September 30, 1947, marking the beginning of an illustrious era that is unparalleled in history. The support to UN peacekeeping operations began in 1960, when Pakistan deployed its first-ever contingent in United Nations operations in Congo. Commencing one step forward, over the past 60 years, Pakistan has been instrumental in implementing the mandate of United Nations missions across the globe. It is the most consistent and the 6th largest troop contributing country, rendering services in nine missions across two continents. Pakistan is well apprised with the important role played by United Nations in maintaining peace and security in many conflicted territories of the world.
Pakistan Army Contingent in Darfur has been rendering services with excellence under the umbrella of UNAMID (African Union United Nations Hybrid Operations in Darfur) since 2008. Pakistan Army’s footprints in Darfur include Pakistan Army Contingent and staff officers in different sections of UNAMID and military observers. Pakistan Army Contingent comprises Contingent Headquarters, Pakistan Battalion-8 and Pakistan Field Hospital-11. Contingent Headquarters mainly coordinates the work/functionality of both the outfits with Pakistan Army Headquarters, supervises the routine functioning of the complete contingent and looks after the deployment and miscellaneous matters of staff officers and military observers.
Pakistan Battalion’s stay at Darfur has been remarkably fruitful for many reasons. Whether it was humanitarian assistance or escorting the logistics convoys, the routine patrolling activity or celebration of national days, Pakistan Battalion was always at the forefront in keeping the flag of Pakistan fluttering high. 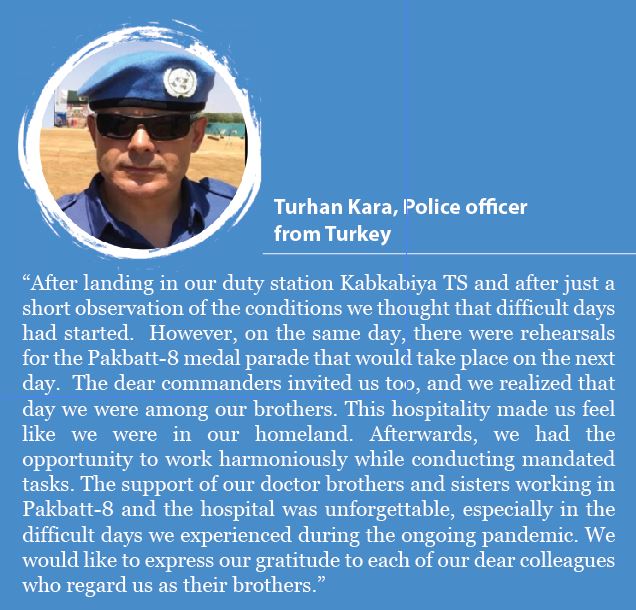 Serving Beyond the Call of Duty in the Line of Peace. During more than a yearlong employment, Pakistan Battalion has made all out efforts to keep up with the mandate given by UNAMID. Pakistan Battalion-8 played a leading role due to its geolocation being occupied as the communication hub in the sector and proved its mettle in implementation of UNAMID mandate and projecting the positive image of Pakistan. Cordial relations remained the hallmark of Pakistan Battalion-8, where, intimate relations were established with the Sudanese officials and tribal leaders. They were invited on national/international days, organized within the TSs besides visiting them in their offices. 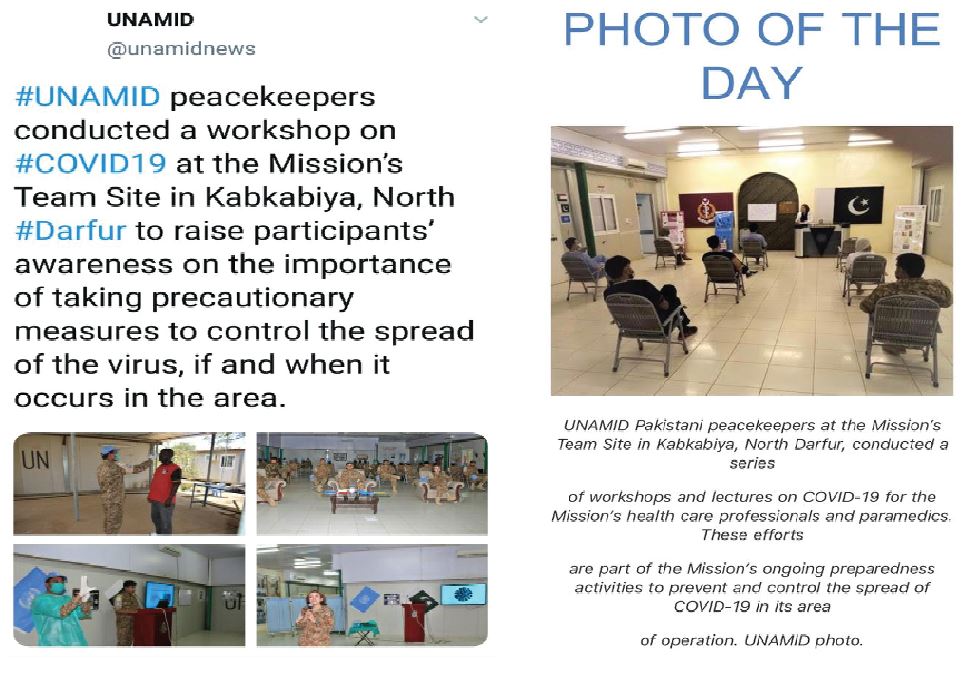 Meeting Challenges When the Need Arose
Not only was this journey based on contribution to the local community but Pakistan Battalion had to go through the thick of time to earn the most coveted honour in the line of serving peace. It took enormous amount of effort and drudging to deal with challenging situations as given below:

Promoting Interfaith and Communal Harmony. It was an important part of the stay at mission area to never forget celebrating national and religious events. Events which were celebrated attracted the attention of international community who praised the spirit of Pakistan Battalion at Darfur.

Pakistan Field Hospital-11: The Pearl of UNAMID
It is the only level 2+ hospital with major and minor specialties able to handle all types of medical and surgical emergencies 24/7, provision of quality medical care by highly professional doctors and paramedics, embellished with state-of-the-art and modern electro-medical equipment and availability of top-of-the-range medicines. Pakistan Field Hospital has been providing medical treatment to not only the UNAMID staff but also to civilians in case of emergency. Due to its extraordinary medical services Pakistan Field Hospital is accorded the title of “Pearl of UNAMID”.

Pakistan Field Hospital-11 has organized three free medical camps with the fostering of UNAMID in Kabkabiya, Darfur and also has the honour of organizing the first-ever free eye camp in which 300 near vision glasses were given to the deserving patients after complete eye examination. One of the free medical camps was organized with the pledge to United Nations Day themed Breast Cancer Awareness/Pinktober. The aim was to raise breast cancer awareness among women. Her Excellency Deputy Joint Special Representative Madam Anita Kiki visited the free medical camp as the guest of honour. 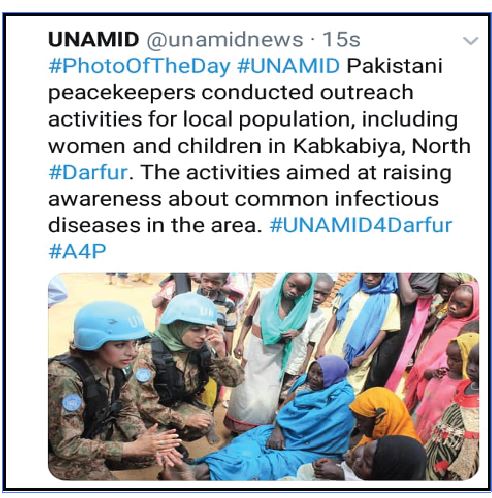 Going one step further in the service to humanity, free wheelchairs, crutches and walkers were also distributed among the patients by PFH. Almost 6000 patients benefitted from all three free medical camps along with free specialist consultation and availability of free of cost medicines.

The endeavors of Pakistan Army healers in Darfur and their services towards humanity speak volumes of their selfless devotion, professionalism and hard work. As it is the only level 2+ hospital it receives medical evacuations from all over Darfur.  In the recent and ongoing global calamity COVID-19, declared a pandemic by World Health Organization, where the whole world was facing a rampant and deadly virus, Darfur was also afflicted with this life threatening virus. Pakistan Army healers treated many COVID-19 patients successfully by providing timely and quality care, the extraordinary efforts of Pakistan Army doctors were highly applauded not only by UNAMID but also by New York Headquarters. UNAMID’s photo of the day and tweets are a testimony to this. 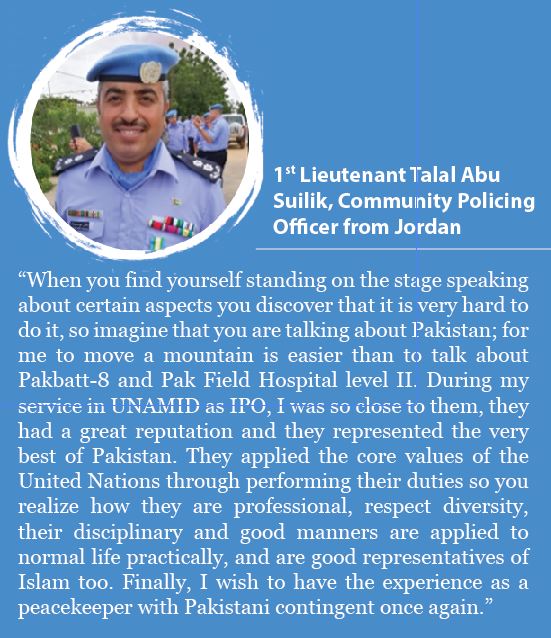 Pakistan Army healers sensitized not only UNAMID staff but also the local Sudanese about COVID-19 through a series of workshops, regular lectures, distribution of pamphlets and displaying posters.

Lady officers of Pakistan Field Hospital-11 stand out in their community outreach programs aiming to raise awareness among the local populace, especially women and children against infectious and communicable diseases like COVID-19, cholera, chicken pox, mumps and measles. The enlightenment encompasses precautionary measures and accentuating significance of clean drinking water and repeated hand washing.
Pakistani female peacekeepers stand committed in their service towards humanity by spreading awareness through peace, hope and kindness.
The commitment by Pakistan Army in Darfur to execute the mandate of United Nations is ineffable. With any commitment comes sacrifice, six Pakistani soldiers have rendered ultimate sacrifice during the discharge of duties and while restoring peace and stability in Sudan/Darfur. This honour behooves well for a country that firmly believes in the UN principles and valiantly stands for global peace. All in all, Pakistani Peacekeepers’ stay has been full of challenges and has been memorable keeping the flame of patriotism kindled along with the pledge to keep the flag of Pakistan fluttering high in the comity of nations.  Pakistan is tirelessly working towards the promotion of peace and harmony among the nations of the world by accomplishing the mandate of United Nations and also by upholding the principles of the United Nations Charter.