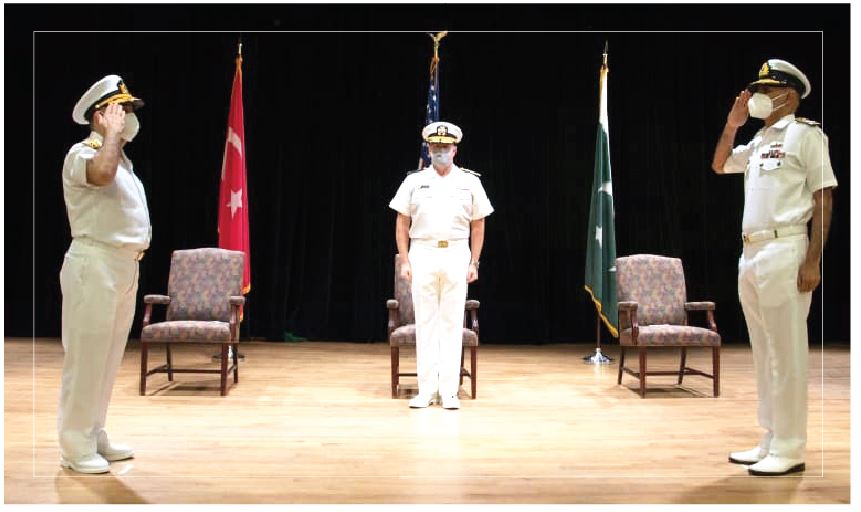 While addressing the audience, the incoming Commander CTF-151, Commodore Abdul Munib assured that his team is fully geared up to shoulder this significant responsibility. He also lauded the outgoing Rear Admiral (LH) Nejat Inanir of Turkish Navy and his team for their dedicated efforts to achieve the set objectives during the tenure of command. Commodore Abdul Munib re-affirmed his resolve to continue with the same spirit and further highlighted the strong relationship between Pakistan Navy and the Coalition Maritime Forces in pursuit of their common objective for a secure maritime order in the region.
CTF-151 is one of the three Combined Task Forces operating under Commander CMF. Its mission is to suppress piracy in the Horn of Africa, Gulf of Aden and adjoining ocean space under CMF. Prior to assuming the command, Pakistan Navy has the distinction of commanding CTF-151 on eight different occasions in the past, which is a manifestation of the trust among the coalition partners.
The ceremony was attended by Ambassador of Pakistan H. E. Mr. Afzaal Mahmood, Ambassador of Turkey H. E. Mr. Kemal Demirciler, Commander Combined Maritime Forces (CMF) Vice Admiral Samuel J. Paparo of U.S. Navy, Commander Royal Bahrain Naval Force Rear Admiral Mohammed Yousif Al Asam, and other senior diplomats and naval officers.