Pakistan army troops are assisting civil administration in containment efforts of COVID-19 across the country. Troops are actively engaged in relief efforts and distribution of more than 3,50,000 Army assistance packages. These packages contain basic food items purchased through contributions of Army’s announced salary donation for people affected by COVID-19 in various areas of Pakistan to daily wagers, the handicapped, labourers, widows and needy people including those in far-flung areas. 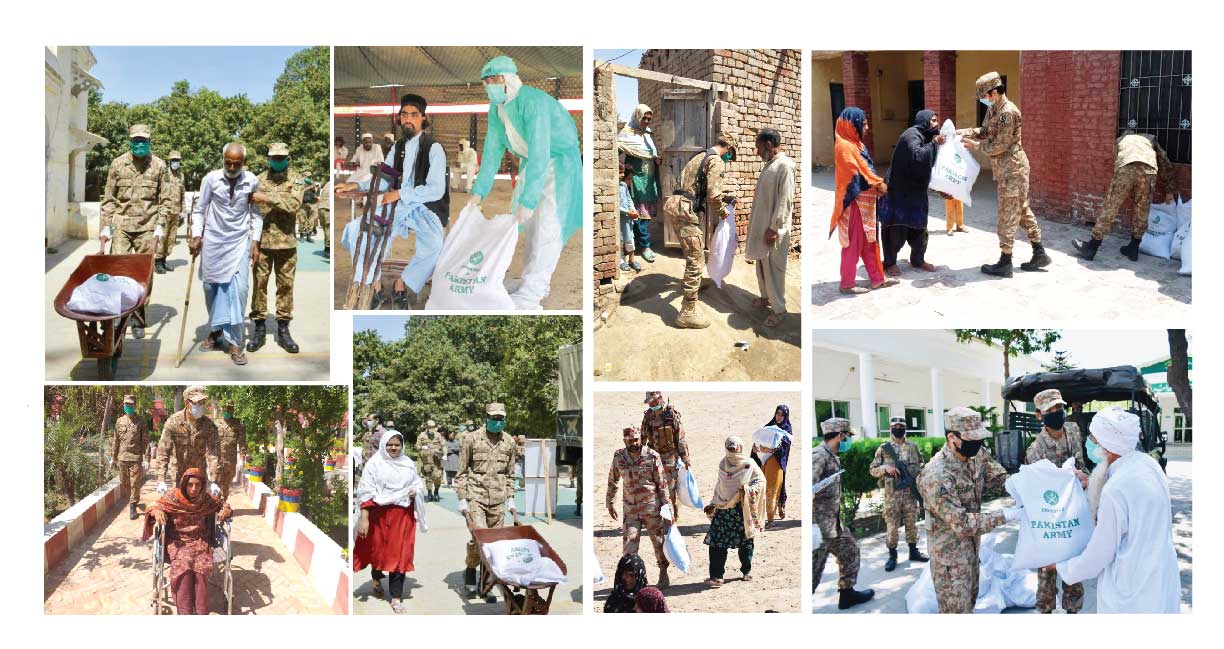 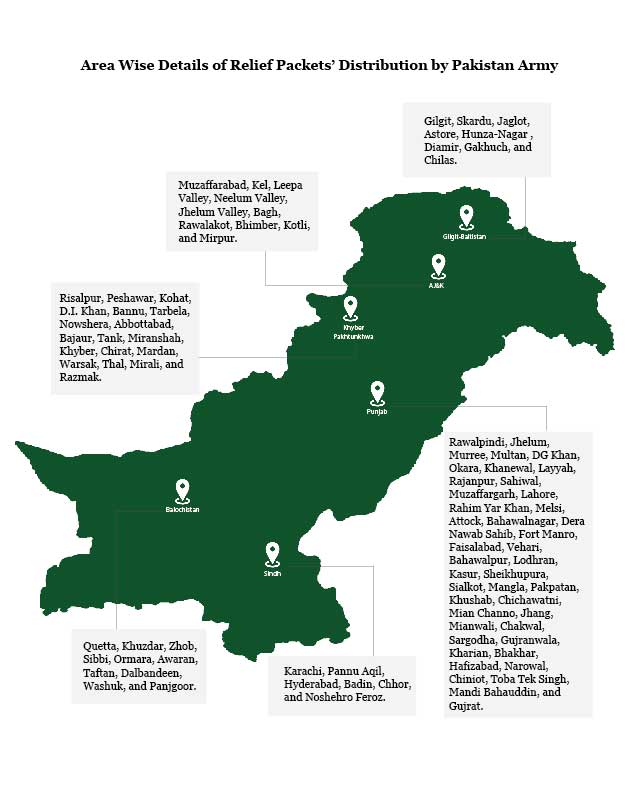 Pakistan Army Supports the Affected Population and Minorities
Assistance Packages Distributed to Families Including Christians, Hindus, Sikhs and Others Suffering from the Economic Impact of COVID-19 Pandemic 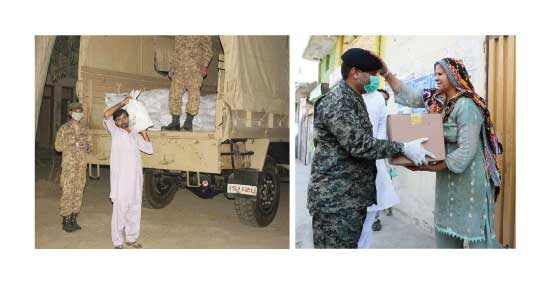 Extending support to the nationwide relief efforts, Pakistan Army is providing support to families that have been severely affected due to COVID-19 pandemic and the ensuing lockdown. This is being done by all formations wherein troops are engaged in relief efforts and distribution of  assistance packages.  Regardless of the distance, religion or any such attribute, these assistance packages are being delivered to the people in need across Pakistan. 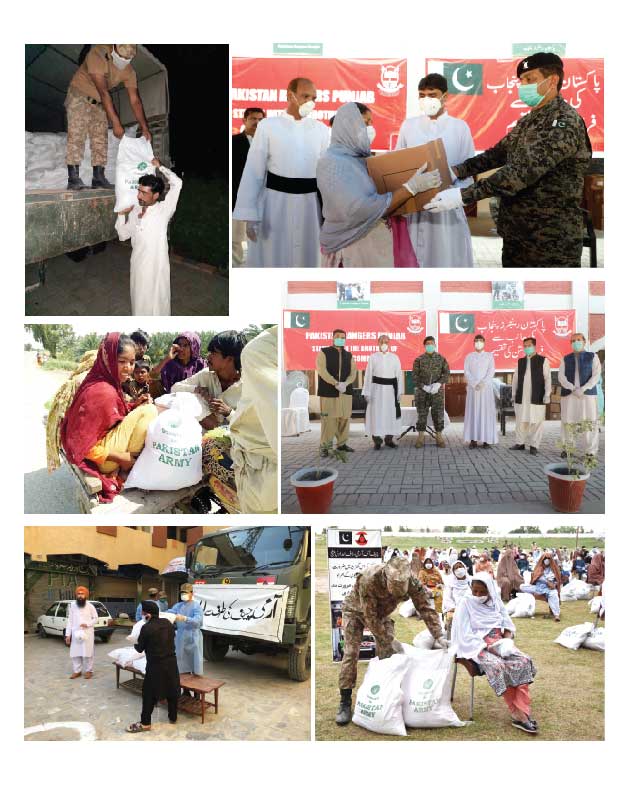 The Karachi Corps took such an initiative in different areas of Sindh where the assistance packages were distributed in Karachi, Pannu Aqil, Hyderabad, Badin, Chhor and Noshero Feroz. It is pertinent to mention that COAS Welfare Package was also distributed among the Hindu community in Noshero Feroz and Kashmore.
Special efforts have been made by troops to identify minority populations, who are in need of assistance including those in the Peshawar Corps’ area of responsibility. Hindu, Christian and Sikh communities have also been engaged in this noble cause to identify the affected people in all the communities for providing them with assistance packages. 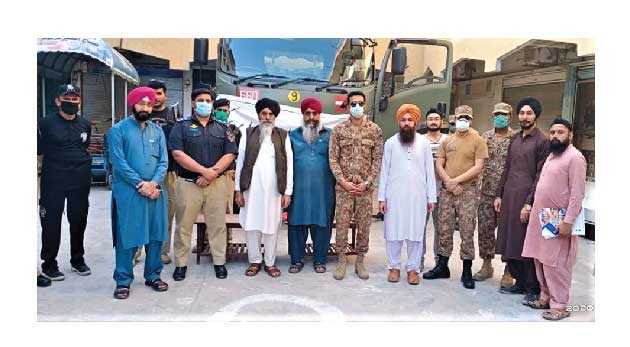 The Lahore Corps, in a bid to share the blessings of Ramadan and as a display of brotherhood between the Muslim and Christian communities, distributed 500 assistance packages. These packages were distributed by the Punjab Rangers in Youhanabad. These assistance packages were distributed to the unemployed daily wagers and needy Christian families, who have been affected by the closure of economic activities due to COVID-19 pandemic. Members of the Christian community appreciated the efforts by the Punjab Rangers for helping the needy people and prayed for early elimination of the pandemic from the country.
Many such relief efforts have been taken nationwide by Pakistan Army troops to help the affected communities who are suffering due to the pandemic.

PPE Distributed Amongst Health Officials by Bahawalpur Corps to Help in the Fight Against COVID-19
A ceremony was organized in Bahawalpur for the distribution of Personal Protective Equipment (PPEs) provided by National Disaster Management Authority (NDMA) to the health officials. In view of safety measures, the events were held in a modest manner in Bahawalpur, Dera Nawab Sahib, Pakpattan, Bahawalnagar, Mailsi, Okara and Rahim Yar Khan Garrisons. Military officials, District Administration and Health Department officials were present at the events. A handsome quantity of PPEs was handed over to the administration of different hospitals in Bahawalpur Corps’ area of responsibility.
On these occasions, health officials thanked NDMA and the Pakistan Army, impressing upon the urgent basis on which the PPEs were required at the hospitals. Distribution of PPEs will help to protect the doctors and paramedical staff in the fight against Coronavirus in a better and protected manner.