The external dangers emanating from India’s perennial hostility, fallout of the Afghan conflict and nation’s major preoccupation with combating terrorism has taken our focus off from the impending water crisis. Experts are predicting the country faces an acute water shortage that will take a dangerous turn by 2025, if corrective measures are not taken. Surely, it will be a difficult task to safeguard national sovereignty and territorial integrity if the country faces a serious water crisis. National security is inextricably tied to the availability of water even in terms of the normative definition of national security that aims at safeguarding national sovereignty and territorial integrity. If we include the more encompassing contemporary definition then internal peace, national development and access to clean water and affordable food and energy are directly related to a country’s security. We also need to be reminded that once thriving civilizations faced extinction when their people were deprived of the basic necessity of water.

These external and internal challenges demand that current and future governments take the national water crisis seriously and implement the policies recommended by experts on a high priority. It is a matter of peoples’ well-being and country’s security.

The relevance of water resources in the context of Pakistan’s foreign and security policy is that nearly 80% of its water resources are supplied by the Indus Basin and its tributaries which originate in the Tibetan plateau and pass through Indian Occupied Kashmir. The Kabul River, which is another tributary of the Indus River, reaches Pakistan after passing through Afghanistan. Its contribution is significant as it adds to nearly quarter of Pakistan’s flow.

The Indus Waters Treaty (IWT) signed in 1960 by India and Pakistan under the umbrella of the World Bank regulates the flows of the three western rivers the Indus, Chenab and Jhelum into Pakistan and Azad Kashmir. In recent years India’s construction of dams on Pakistan specific rivers and the adverse impact of climate change on flow of these rivers have raised serious concerns in Pakistan.

Afghanistan’s recent flexing of muscles and statements by some of its politicians of increasing their share of water from Kabul River is disconcerting. A more mature approach by both countries would ensure optimum utilization of this resource. 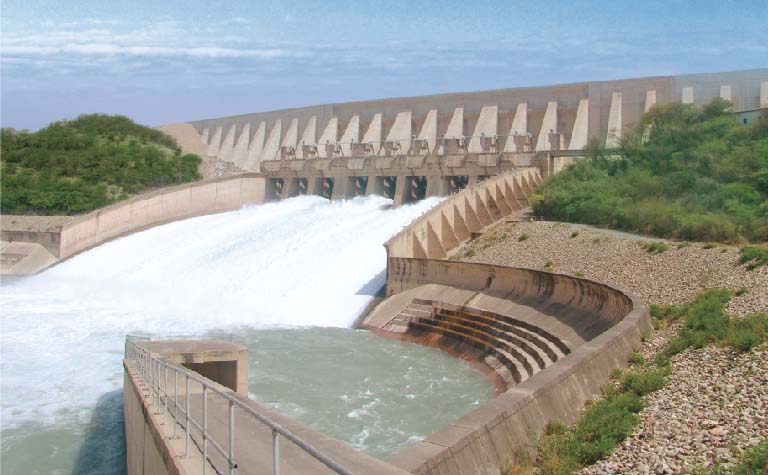 At the national level it is very important to have a detailed water policy covering both its civil and military dimensions. Availability of water is clearly a matter of survival for a nation and thus should be high in priority for Pakistan. Furthermore, linking water availability with national security would galvanize the federal and provincial governments and the people to take serious steps at formulating and implementing policies that ensure that Pakistan remains free from the dangers of facing an impending national catastrophe. Already, credible institutions like Pakistan Council of Research in Water Resources (PCRWR) have warned that the country would be facing a serious water shortage if the government fails to take effective remedial measures.

One thing is clear that successive governments lacked the political will and interest in dealing with the water crisis. Experts had recommended building water storage facilities but every proposal for construction of dams became a casualty of narrow provincial politics. The smaller provinces too have complaints that Punjab takes away their share of water. Whether this is a reality or merely an expression of frustration only the Council of Common Interests can determine.

In this context the report prepared by World Wide Fund for Nature (WWF-Pakistan) ‘Development of Integrated River Basin Management in Pakistan’ by eminent water specialists like Dr. Pervaiz Amir and others draws the government’s attention that the Indus Basin is currently vulnerable and there is a dire need to streamline and overhaul the water management structure of the country. Its frank appraisal of the weaknesses in the legal and institutional framework for water source allocation and changes in our cropping patterns needs to be given serious consideration. More importantly the recommendations made in the report should be implemented in the National Water Policy.

Regrettably, corruption that pervades every aspect of Pakistan’s life is equally active in the water sector. Officials allocate water resources on the basis of patronage rather than the specific requirement of that particular area and what is in the best interest of the country.

What is more significant is that it violates the spirit of the Treaty! Essentially, India is taking advantage of certain ambiguities in the IWT. The ambivalent attitude of the World Bank when it comes to interpretation of the Treaty, lest it becomes controversial, suits Indian designs.

Another disturbing fact is that Pakistan ranks very high among countries in water usage. Its economy is highly water-dependent and consequently water intensive. IMF rates Pakistan as the third most water-stressed country with availability dangerously nearing the scarcity benchmark of 1000 cubic meters. One of the reasons for high consumption and wastage is the low price of water and agriculture sector being exempted from taxation. It is worth examining that should a water scarce country engage in sugarcane production or other high water consumption crops and not find alternate crops for cultivation. Experts advise that rice plantation has to be better managed with less utilization of water.

With population increasing at the highest rate in the region and people moving from countryside to cities for seeking employment opportunities, the water crisis is aggravating. The impact of climate change resulting in higher average temperatures in Pakistan has resulted in higher consumption of water. Poor water management is another factor that results in wastage and there are no serious efforts in offing to redress this weakness. Generally, the government and people are resorting to short-term solutions by relying heavily on groundwater supplies. Even this resource is fast depleting as water table is rising and successive governments at the provincial and federal level have paid scant attention to it. Faulty policies have contributed to salinity of the soil at places that were at one time well-known for wide range of agricultural products and high yields.

Prolonged neglect of the water sector by successive governments could lead to a situation whereby people not only will lose faith in the legitimacy and utility of the government that it cannot provide its basic needs and protect its fundamental right – the right to live.

Adding to our water woes is the hostile posture of India. Despite Pakistan’s protestations it has gone ahead with power projects of Baglihar and Kishanganga. Furthermore, the Chenab Basin projects have been planned to produce hydropower using the run-of-the-river technique, by diverting the water through a tunnel that generates electricity before it enters the river. India claims it is adhering to the terms of the IWT, whereas Pakistan has challenged the assertion that dams being constructed by India on Pakistan specific rivers have the potential of holding water. What is more significant is that it violates the spirit of the Treaty! Essentially, India is taking advantage of certain ambiguities in the IWT. The ambivalent attitude of the World Bank when it comes to interpretation of the Treaty, lest it becomes controversial, suits Indian designs. Pakistan’s request to the World Bank to constitute a Court of Arbitration to resolve differences between India and Pakistan came too late and in any case was not accepted. With United States being India’s strategic partner and the former exercising maximum influence in policies of World Bank to expect any shift in India’s attitude or policies toward Pakistan in the near future would be unrealistic.

These external and internal challenges demand that current and future governments take the national water crisis seriously and implement the policies recommended by experts on a high priority. It is a matter of peoples’ well-being and country’s security.

The writer is a retired Lieutenant General from Pakistan Army and an eminent scholar on national security and political issues.