Pakistan’s Independence and Beyond

A nascent state having its resources usurped by its neighbor India, Pakistan has come a long way in the last seventy five years.

Pakistan became an independent sovereign state on August 14, 1947 after a long-drawn independence movement in pre-partition Hindustan by all sections of the Muslim society. As all nascent states experience, Pakistan too faced a myriad of issues, both internally and externally. Internally, the most serious challenge was to cater to the flood of refugees who had left their homes and hearths in India and opted for their new country. 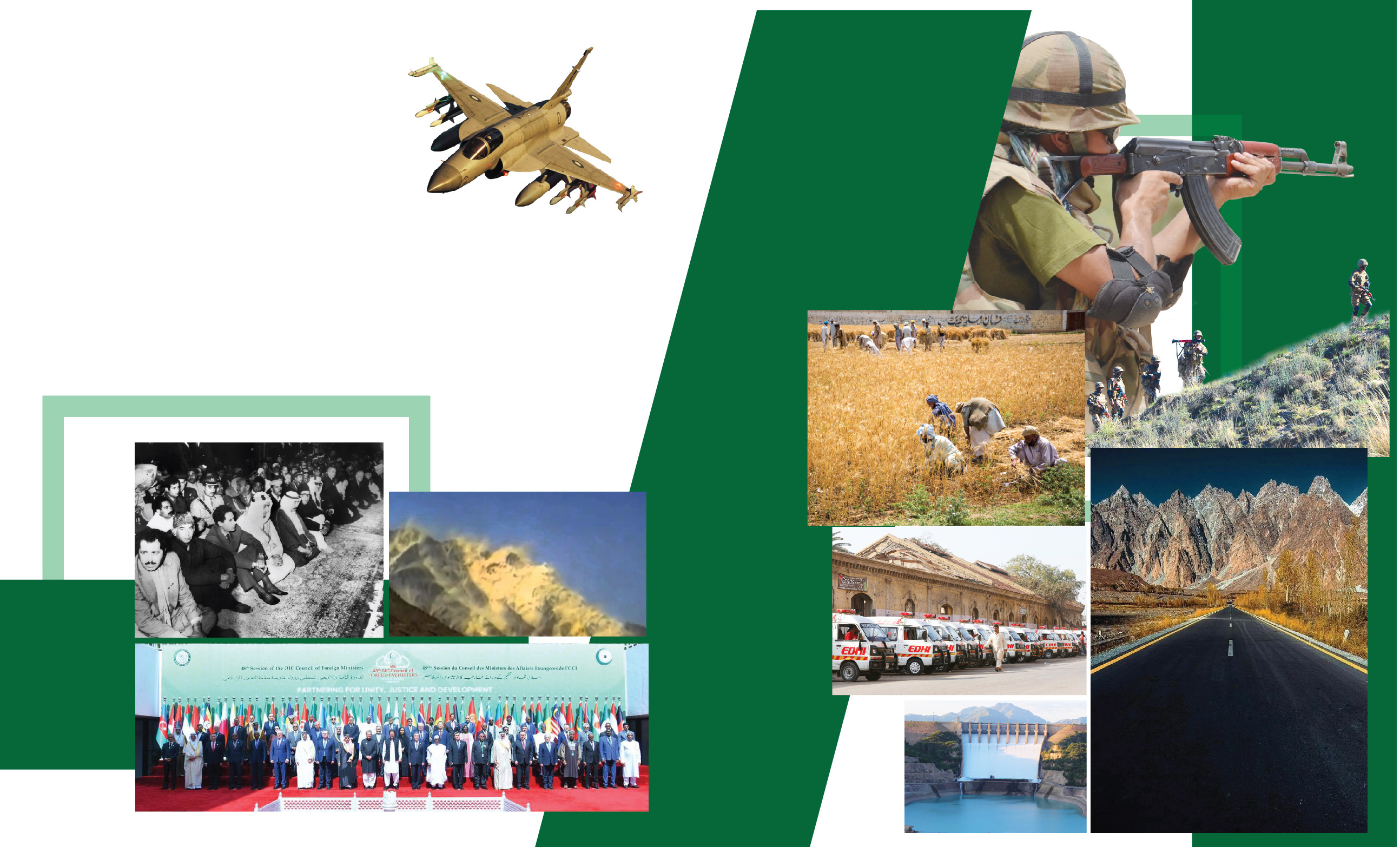 The next challenge was to adopt a constitution which was agreeable to all, so that matters of statecraft could be handled in a systematic manner, which is essential for internal stability. India was able to formulate a constitution within a year and half. It was promulgated on January 26, 1949 and India became a Republic. Pakistan, unfortunately, suffered some serious setbacks like demise of Quaid-i-Azam Muhammad Ali Jinnah in 1948 and the assassination of its first Prime Minister, Liaquat Ali Khan, in 1952. It was not until March 23, 1956 that Pakistan was able to promulgate its first constitution and became Islamic Republic of Pakistan.
It has to be said though that the bureaucratic apparatus of the time took some sterling decisions, most notable being execution of a robust water conservation and hydropower generation strategy, which if followed in subsequent years, would have reduced pressure on increasing energy demands in the later years and an increase in agricultural produce.
The unfinished agenda of Jammu and Kashmir in the post-partition period played its own role in the political history of Pakistan, which resulted in Indo-Pakistan wars in 1948 and 1965.
There is, however, a general tendency to look only at the dark side of how the Pakistani state has come about in the years since partition and ignore the positive side in which Pakistan has made considerable progress.

Indigenous defense production has received substantial boost with the result that it is capable of producing wherewithal for all the three services.

In spite of myriad challenges, Pakistan did make progress in a number of areas which are commendable. For many years after independence, Pakistan experienced acute food insecurity and was dependent on the U.S.’ PL-480 food assistance programme. The population has increased from 32 million people in 1947 to nearly 230 million today. Enough land has been brought under cultivation to provide food security to its population, and produce crops which earn precious foreign exchange for the economy. Some years, for a variety of different reasons, the country imports a small quantity of wheat, but the supply-demand equilibrium is generally well balanced. The need to import wheat could perhaps be eliminated altogether if smuggling is curtailed. Spread of terrorism in the country after the invasion of Afghanistan by the erstwhile Soviet Union in 1979, and other societal factors, have been a cause for concern.
Development of infrastructure and industries is another area where the country has made significant progress. Pakistan is recognised as a major textile exporter. Indigenous defense production has received substantial boost with the result that it is capable of producing wherewithal for all the three services. Health services had to be created from scratch after partition and today there are public sector as well as private hospitals in almost every city. The introduction of health cards for the underprivileged in Khyber Pakhtunkhwa and Punjab has alleviated sufferings of the financially stressed sector of the society.
Approximately 40 percent of the population in Pakistan falls under the middle class category, which, in any country, drives the economy as they are the biggest consumers of locally produced goods. This huge volume of middle class is a great incentive for foreign investment. The progress exhibited in cars and motorcycles assembling/manufacturing industry is a good indicator of prosperity of the people at large.

Pakistan has been successful in keeping in check a five times bigger and hostile neighbour which has a stated national policy to isolate us globally and, without a doubt, is not favorably inclined to our existence.

Pakistan has attained a respectable place in the comity of nations. Pakistan has been a regular contributor of peacekeeping troops towards UN missions in troubled spots around the globe. In March 2022, Pakistan hosted an Organisation of Islamic Cooperation (OIC) conference in Islamabad in which Foreign Ministers of 57 Muslim countries participated.
Pakistan has been successful in keeping in check a five times bigger and hostile neighbour which has a stated national policy to isolate us globally and, without a doubt, is not favorably inclined to our existence. We were against nuclearization of this region but when India detonated a nuclear device in 1974, we had no option but to respond and follow suit in order to institute effective nuclear deterrence and make our country’s defense impregnable.
Achieving nuclear capability and a potent deterrence against a bigger enemy is no small achievement as Pakistan is the only Muslim country to do so. Success was achieved by a team of dedicated scientists in spite of opposition from the U.S. and economic sanctions, where many other countries failed or buckled under extreme pressure.
In the social sector, Edhi Foundation, established in 1951 is a unique 24/7 service across the country in the cause of the poor and destitute. The Foundation, among other services, provides shelter for the destitute, hospitals and medical care, drug rehabilitation, and national relief effort in times of natural calamity. Its activities are not just restricted to Pakistan and has extended financial and supplementary assistance to other countries such as Europe and Americas. The organisation is known to serve humanity regardless of religion or race of the population in distress and can be considered a unique achievement of Pakistan post-independence.
Expansion of irrigation network is another area which stands out as a huge success after the independence of the country. The network provides water to approximately 90 percent of the agricultural land in Pakistan which roughly works out as 19.8 million hectares. The irrigation system is composed of numerous barrages, headworks and canals and three major water reservoirs: Tarbela Dam, Chashma Barrage and Mangla Dam. The total length of all canals serving the agricultural land is in excess of 58,500 kilometres, most of which has been constructed post-partition.
There have been instances where the country failed to develop a consensus on rule of polity and exhibited total indifference towards masses and their problems. A case in point is the lack of consensus on construction of Kalabagh Dam, which with dwindling water resources, and increasing cheap energy demands, is so crucial for future of the country. The irony is that, all technical arguments prove beyond any shadow of doubt that lower riparian region will not be adversely effected.
As for the future, we must remember that every country has a distinct place on the globe. Like most other nations, Pakistan has different languages and cultures as well as distinct sources of national income. It is rich in minerals and natural resources but economic development hasn’t been as rapid as the population would have wished.
Not all countries in the world are rich even though they have resources like oil, steel, minerals, crops and export products. Others are still poor and struggling for the good of its people. Investment in human resource is the modern instrument towards national prosperity. In the recent years, Pakistan has started paying attention to this aspect and with a huge segment of younger population, we are hoping for results in the years ahead.
Citizen-state is not a one way street and it is crucial that citizens help their country by supporting the efforts of their leaders in an honest and earnest manner. It is not an easy task to simultaneously take care of huge population and take the country on the path of progress and prosperity. It takes a lot of effort, sound decision-making, balancing the economy, preserving natural resources for the future generations and ensuring that the country is safe without forsaking people’s rights.

The writer is a retired Vice Admiral.
E-mail: [email protected]