According to Jean Paul Sartre, legends are made not born. He argues that everyone is born human and it is the path we take and the choices we make which transform a handful of us ordinary humans into living, breathing legends. The story we are about to read is of one such legend who is very close to our home and our hearts.
Picture this. The year is 1965 and Pakistani Armed Forces are engaged in an active warfare against India. Pakistani Army is deployed all across the country’s borders from Sindh till Jammu and Kashmir to protect the country’s sovereignty. The Air Force has flooded the country’s skies to defend it against enemy’s attack. The Pakistan Navy is armed and ready to launch a deadly strike should the enemy dare breach the country’s naval sea.

The sons of nation do not hesitate when the motherland calls for them and our hero responds to the call as well. The hero of our story is a young soldier of the Pakistan Army. He belongs to Tarar Khel, Kashmir where his family bid their son farewell as he leaves to join his regiment which is deployed in Azad Kashmir. One of the deadliest wars in Pakistan’s history is underway and our valiant hero meets the enemy face-to-face at a number of occasions. He has vowed to lay down his very life to defend his country from the nefarious designs of the enemy. Just like thousands of other brave sons of the nation, our hero rises to the occasion and fights fearlessly for the defence of the motherland. Him and his comrades emerge victorious on numerous occasions and respond to the call of duty with more vehemence each time than before.

It is during one such combat in August, 1965 that the young sepoy vanishes. No one knows of what befell him and he is eventually declared missing in action on August 20, 1965. A ceasefire is declared in September, 1965 and both the countries call their forces back from the border. Over 3,000 of Pakistan’s brave, fearless men including Maj Raja Aziz Bhatti Shaheed; a Nishan-e-Haider recipient, embrace shahadat. The bodies of these martyred heroes come back home wrapped in sabz hilali parcham and they are buried with military honors. The entire nation is grateful to these men in khaki who laid down their lives in the line of duty. However, the young hero of our story is still missing in action.
Fast forward to 2005 when Wagah border prisoner exchange takes place. India returns Pakistan’s civilian prisoners; most of them fishermen who unknowingly crossed into Indian waters while at sea. Amongst those released is an unidentified elderly man. He cannot speak and appears to be mentally unstable. The government officials try their utmost to learn about who he is so he can be reunited with his family. Whenever he is questioned about his identity, in some of his saner moments, all he can manage to scribble across a piece of paper is “Number 335139”.

The repetition of this particular number intrigues the civil officials who dig a little deeper and come to the conclusion that this elderly man must have been a soldier. They contact the concerned authorities and it is revealed that he is indeed an army personnel who went missing in action in 1965 Indo-Pak War and the number 335139 is his Army bearing number.

Our young hero is none other than Sepoy Maqbool Hussain. The missing pieces of the puzzle fall into place and 40 years later the mystery of his disappearance is finally resolved. It turns out that he was assigned to a task force responsible for disrupting enemy’s operations and severing their lines of communication. The task force was successful in its mission, however, while exfiltration from hostile territory Sepoy Maqbool Hussain was severely wounded and captured by the Indian Army.

From thereon begins an era of tormented confinement, inhumane treatment and excruciating torture of Sepoy Maqbool Hussain at the hands of a ruthless enemy which spans across four decades. He is subjected to the most gruesome torture and afflicted with sufferings every single day henceforth. The Indian army crosses all limits of human rights violation and never declares him as a prisoner of war which would have otherwise guaranteed him with certain rights.

In order to get information out of him which the enemy could use against Pakistan they subjected Maqbool Hussain to agonizing mental and physical torture. The details of the gory and horrific crimes committed against him are enough to bring even the strongest amongst us to their knees. However, Sepoy Maqbool Hussain had vowed to never betray his country and he braved through these atrocities for over 40 years.

While he was still in captivity, the conspiracy of 1971 took place. Gleeful, Maqbool Hussain’s captors submitted him to a fresh surge of mental torture and physical assault. They forced him to chant ‘Jay Hind’ and every time they did so Sepoy Maqbool Hussain had only one thing to say to them; Pakistan Zindabad.  When the enemy realized that they could not break him and that he would sooner die than raise a slogan against his country, they, in an inhuman act of downright mercilessness and cold-blooded cruelty, amputated his tongue and broke all of his teeth. Every single time a wounded and bleeding Maqool Hussain would be thrown back in his cell this courageous soldier would pick up courage and scribble Pakistan Zindabad across the walls of his cell with a bloodied finger.

As a result of being subjected to long-term torture, he eventually lost his mental balance. Perceiving him as of no further use to them the enemy returned him to Pakistan and feigned ignorance over his military status. They thought they could break him but they underestimated the valor of the sons of Pakistan. What they did not know was that a soldier of the motherland would never betray his country and his people.

Solitary confinement and 40 years’ worth of mind-numbing, soul-shattering excruciating torture are not the only factors which make Sepoy Maqbool Hussain our mute legend. It was the fact that, alone, he continued to fight a war long after ceasefire took place. This was the war of a solitary, unarmed, shackled and confined soldier against the wrath of a foul enemy.  His resilience and fortitude was his only shield against a ferocious army. His war was against an army, an ideology and an entire nation in order to defend the sanctity and honor of his own country. 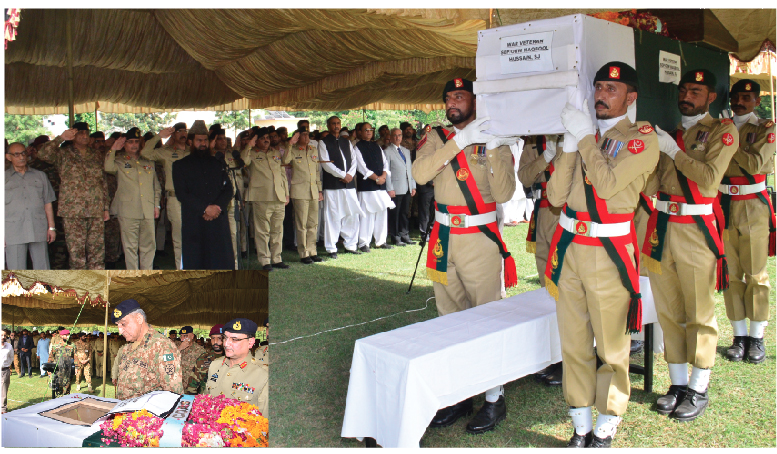 The war which Sepoy Maqbool Hussain fought is the same war which our brave soldiers fight to this day.  What makes his valiance commendable is that he fought alone for over 40 years and no one ever knew about it. For us, the war ended and life went on. In the wake of it, an entire generation of Pakistanis grew up without ever knowing that a brave son of Pakistan was enduring endless torture day after day for their sake.

Today, our armed forces fight another war in a similar manner in order to defend the sovereignty of Pakistan against enemies within and enemies without. While we go about our everyday life, our valiant soldiers are engaged in countless, undeclared battles across numerous fronts to keep and preserve the sanctity of the country. Every soldier that we see has sworn to defend Pakistan with his life and continues to do so for as long as necessary.

The utmost patriotism which Sepoy Maqbool Hussain must have nurtured in his heart all these years is the stuff that legends are made of. He continued to be a beacon of resilience and perseverance when no one was even looking. He bore the brunt of enemy’s degenerate intentions without ever bearing arms. He taught the enemy a priceless, lifelong lesson; they may unleash hell on the sons of Pakistan but they will never be able to break them. A solitary, defenseless man taking on an entire army for over 40 years and his only armaments being the love he bore for his nation and the loyalty he owed to his country is what makes Sepoy Maqbool Hussain a legend.

When he crossed the border that day in 2005, there was no family waiting to welcome him back in his hometown of Tarar Khel, Kashmir. His parents and siblings had long been dead. They say that his mother waited for his return for as long as she lived and when she died she was buried along the entrance to their village, according to her will, so that whenever her son would come back home she would be the first one to welcome him. However, little did she know, that her son would be welcomed back like the ghazi that he was. Maqbool Hussain would be embraced by an entire nation which is forever indebted to his services.

Sepoy Maqbool Hussain, recipient of Sitara-e-Jurat, breathed his last on August 28, 2018. The nation salutes its valiant son who was the living embodiment of heroism, resilience and an unshakable mettle. He lives on in our memory and will continue to do so forever in our hearts. The story of his sacrifice will not go untold and will not be forgotten by generations of Pakistanis to come. Sepoy Maqbool Hussain, tumhein watan ki hawayein salam kehti hain. Go in peace and may you forever be under Allah’s eternal grace.

The author is a freelance writer, an avid reader, a bibliophile and an educationist.
E-mail: [email protected]