The convocation and graduation ceremony of No 33rd Air War Course was held at Air War College, Karachi on June 25, 2020. Vice Chief of the Air Staff (VCAS), Pakistan Air Force Air Marshal Ahmer Shehzad was the chief guest at the occasion. 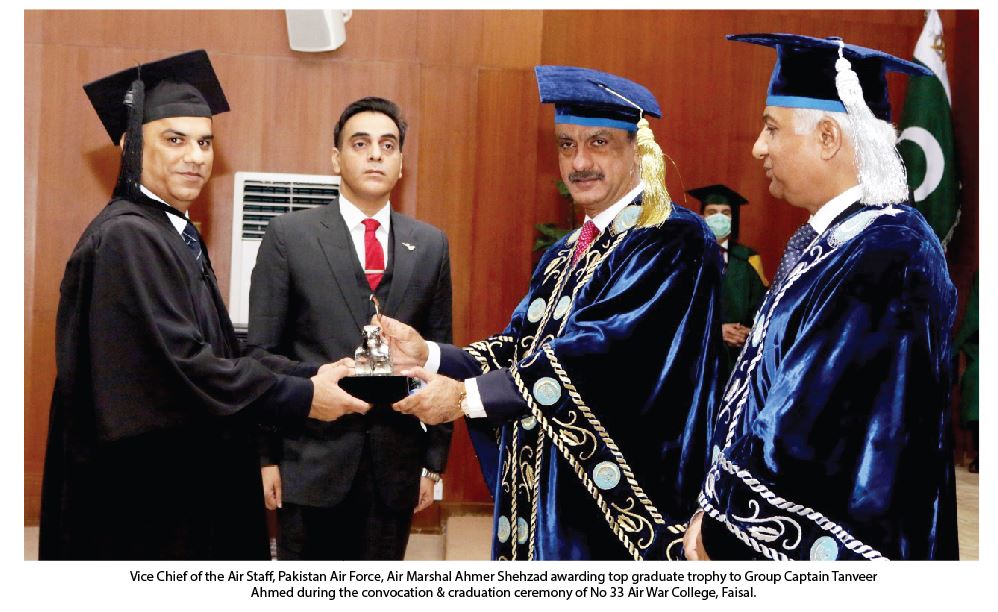 Addressing the graduating officers, the chief guest advised, “You must be aware of the contemporary geopolitical and strategic environments since it would not only have a deep influence on the overall security calculus, but its sound understanding would also facilitate better preparedness and timely response to emerging threats.” The VCAS further said that in the context of South Asia the situation in Indian Illegally Occupied Jammu and Kashmir and the emerging developments between China and India are precarious for the region. He added, “In today’s warfare, both conventional and unconventional, no service could achieve success single-handedly. Jointness remains central and cross domain deterrence is the need of the hour; while cyber, space and hybrid warfare are the avenues to be explored and mastered.” Later on, the VCAS awarded certificates to the graduating officers. The top graduate trophy was awarded to Group Captain Tanveer Ahmed.
PAF Air War College is a premier institution of Pakistan Air Force, where senior and mid-level officers of Pakistan Armed Forces and friendly countries are prepared in the domains of air power doctrine, strategy and employment for higher command and staff appointments. The officers from tri-services of Pakistan, along with the officers from thirteen allied countries including Bangladesh, Bahrain, China, Egypt, Indonesia, Iraq, Jordan, Malaysia, Nigeria, South Africa, Sri Lanka, Saudi Arabia and Zimbabwe were amongst the graduates. The ceremony was also attended by various high ranking civil and military officers and diplomats from allied countries.