Moment of Pride for the PAF 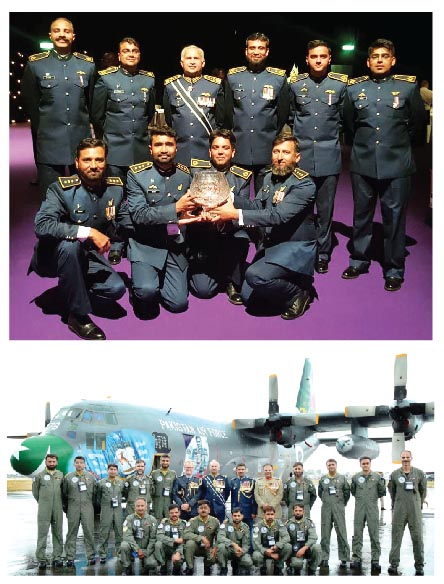 An artistically painted PAF C-130 aircraft landed at Royal Air Force Base, Fairford (UK) to participate in the Royal International Air Tattoo Show 2018. Reputed to be one of the biggest military air show in the world, it features modern military and classic aircraft from the reputed air forces of the world. Various air forces, aircraft operators, aerospace and technology companies as well as organizations also participated in the event. The No. 6 Squadron Hercules was competing for the coveted Concours D' Elegance trophy at the prestigious air show which opened to the general public from July 13-15. This year’s theme was “International Centenary Celebrations of the Royal Air Force”. The PAF contingent comprising air and ground crew participated in various competitions and events at this mega event. PAF C-130 aircraft was adjudged runner-up in the prestigious Royal International Air Tattoo Show 2018.

Air Chief Marshal Mujahid Anwar Khan, Chief of the Air Staff also arrived at the venue to witness the static display of the No. 6 Squadron's Hercules. He was briefed about the various photographs and paintings which were put on display in the aircraft.  He congratulated the PAF contingent for putting up a nice show in the mega event. PAF C-130 had previously won the prestigious trophy in 2016, when it was declared the best aircraft for highlighting Pakistan's role and its sacrifices in the war against terror.
About 300 military and civilian aircraft including USAF F-35A, French Air Force Rafale C, German Air Force Tornado IDS and RAF Red Arrows were also on display at the show.