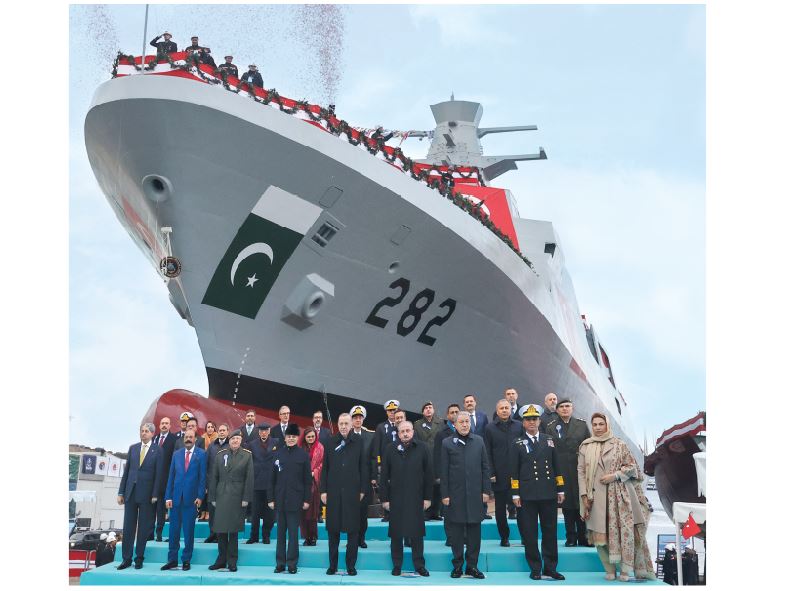 While addressing the ceremony, Prime Minister of Pakistan, Mian Muhammad Shehbaz Sharif expressed that it is a matter of pride to attend the Launching Ceremony of PN MILGEM Corvettes at Turkiye. He added that PN MILGEM Ships being built in collaboration with M/s ASFAT of Turkiye is a testimony of our vigorous drive towards indigenization and deepening collaboration with the brotherly country, Turkiye. Prime Minister of Pakistan also highlighted that relations between Pakistan and Turkiye are unique in nature and time tested. Pakistan and Turkiye enjoy deep-rooted ties between their people who have stood together in challenging times.
President Erdoğan in his address termed the brotherly Pakistan-Turkiye relations as exemplary and emphasized on enhancing collaboration between the two countries in all fields. He acknowledged the importance of military collaboration between two brotherly countries and the potential to enhance defense production through joint projects. President Erdogan reiterated Turkiye's continued support to Pakistan on all core issues.
Speaking at the occasion, Chief of the Naval Staff, Admiral Muhammad Amjad Khan Niazi said that Pakistan-Turkiye friendship will act as a force multiplier in the regional stability and Pak-Turk navies will play a pivotal role in this regard. The Admiral highlighted Pakistan's internal and external challenges and Pakistan Navy's contribution in maritime security through national as well as collaborative security mechanisms.
Pakistan Navy contracted the construction of four MILGEM Class Corvettes from Turkiye in 2018. Under the contract, two ships are being constructed at Istanbul Naval Shipyard and other two at Karachi Shipyard and Engineering Works. The construction of latest warships in Pakistan will significantly enhance local capacity to undertake complex and technologically advance ship building projects.