The story of Indian Army’s human rights violations captured in vivid detail in the shape of irrefutable video, audio, and documentary evidence, including the names of the Indian occupation officers ordering extrajudicial executions and other crimes.

Ali Muhammad Bhat returned to his hometown in Kashmir on July 25, 2019, after 23 years in jail in India. The first thing he did was visit the graves of his parents, who are buried side by side; they died while waiting to see him. The video of him hugging the graves of his parents, captured by a bystander on a smartphone, touched everyone who watched it. The clip is heartbreaking and also went viral on social media.1 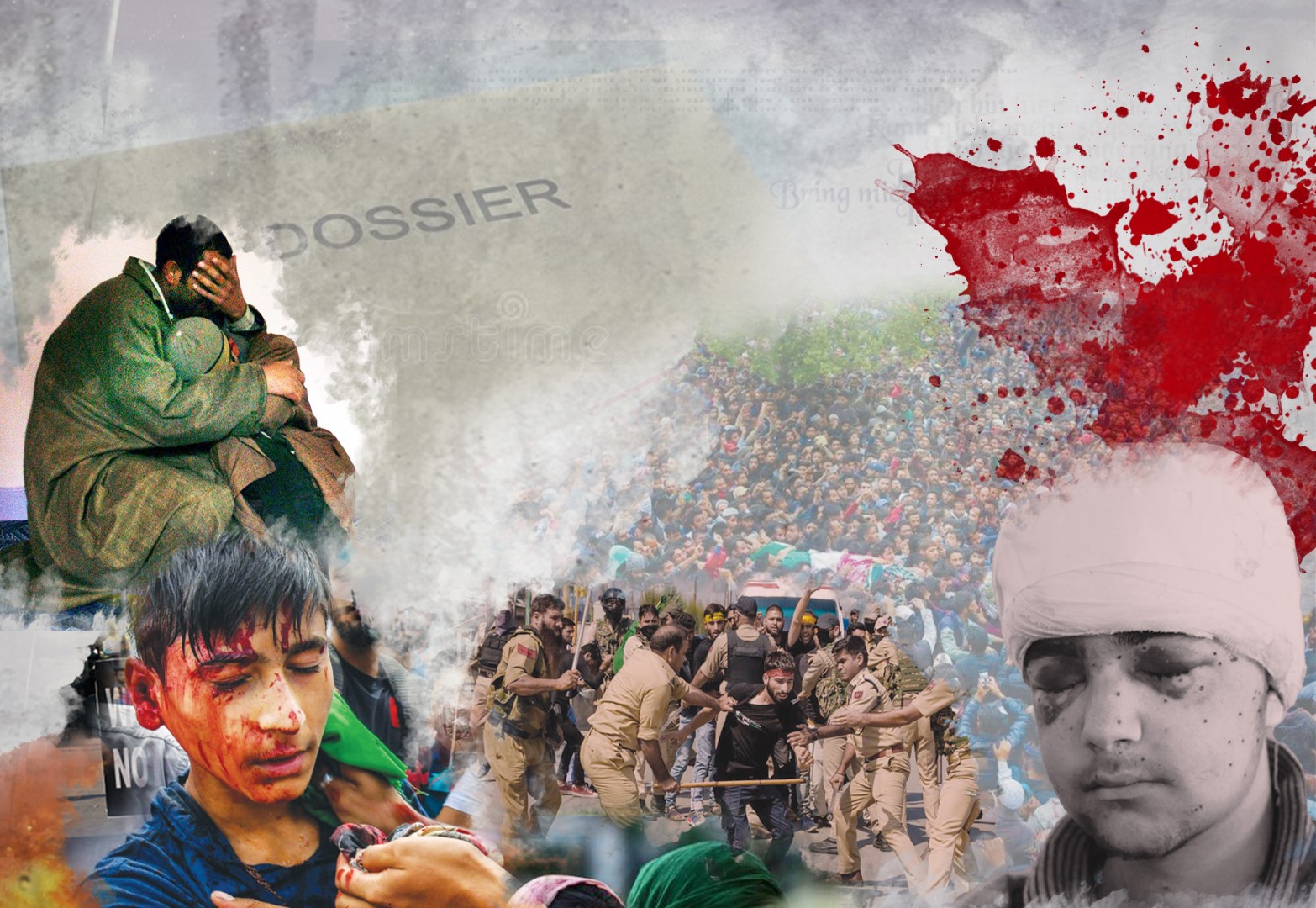 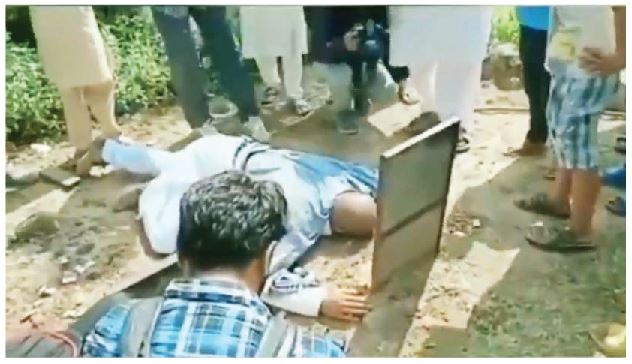 Bhat was released from an Indian jail two days earlier on July 23, 2019 for lack of evidence. The Indian police and courts concluded he was not a terrorist and was jailed by mistake.
Twenty-three years earlier, on May 22, 1996, a bomb went off in a village in the Indian state of Rajasthan, killing 14 Indians. Bhat was arrested because he was a Kashmiri. He was jailed on suspicion without any evidence and punished because Kashmiris launched an uprising five years earlier, in 1989, demanding India to end its occupation of Kashmir which began when Indian Army invaded the region in 1947.
He was 24 years old when they jailed him. And when he walked out, he was 47. Al Jazeera featured him in a report titled, “After 23 years of wrongful imprisonment, Kashmiri men return home”, published on July 28, 2019.
This is how crimes against humanity were born in Kashmir, starting in the 1990s.
On September 12, 2021, the Government of Pakistan released a dossier2 on war crimes and crimes against humanity committed by India in Illegally Occupied Jammu & Kashmir (IIOJK), affecting millions of Kashmiris like Ali Bhat.
Three Chapters, A Thousand Names
Spread over 131 pages, the dossier is a meticulous work of research and documentation sourced from Indian and international media, divided into three chapters that cover war crimes, indigenous Kashmiri resistance, and Indian attempts at demographic change.

The dossier is a collection of incriminating evidence of war crimes and includes the names of more than a thousand Indian officers and officials implicated in crimes against Kashmiris. Those crimes include gross human rights violations, war crimes, genocide and torture against the Kashmiris by India.
The scope of the evidence presented by the dossier is breathtaking, with careful documentation of thousands of cases of torture, enforced disappearances, and sexual violence by Indian soldiers. The dossier documents each of the aforementioned atrocities committed against the people of Kashmir separately. The following list highlights the cases distinctly mentioned in the dossier: 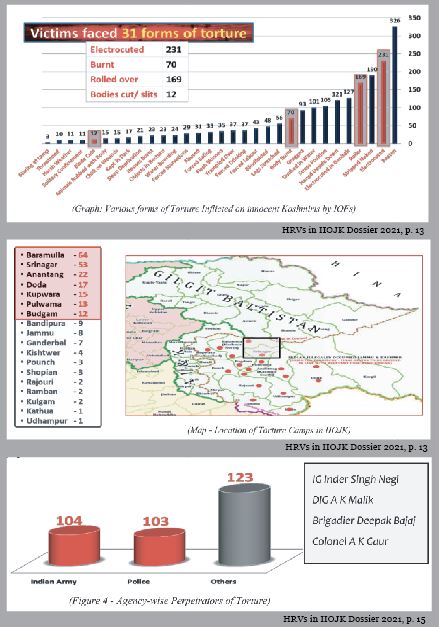 Incriminating Evidence in Audio and Video
The Pakistani dossier on India’s war crimes in Kashmir destroys the wall of Indian denial by presenting audio and video evidence of officers of the Indian military and occupation administration in the disputed region, plotting crimes and admitting to abuse, accompanied by the names of the officers exposed by this tranche of evidence. This move by the Government of Pakistan, and at this scale, is unprecedented in the history of Pakistani diplomacy on this conflict.
For example, under the heading “Indian Army Officers Discussing Genocide in IIOJK”, an audio clip is available of an Indian Army operator connecting a 2IC (Second in Command) with his CO (Commanding Officer). The two officers can be heard discussing how 40 Kashmiris were detained at an Indian Army base manned by 26 Rashtriya Rifles. The two officers are heard saying the Kashmiri men were beaten for 15 days, leading to their deaths.
In another audio clip titled, “Planning of Fake Encounter by Indian Occupation Force Officers”, Indian officers are heard planning to kill innocent Kashmiris and present them as terrorists killed in gun battles. In other audio files, Indian officers are discussing the abuse of minor Kashmiri girls and boys.
These audio files are properly sourced, in some cases with either names of the individuals, dates, locations, or names of the exact occupation military units.
Listed below are titles of other audio files that contain incriminating evidence against the Indian military: 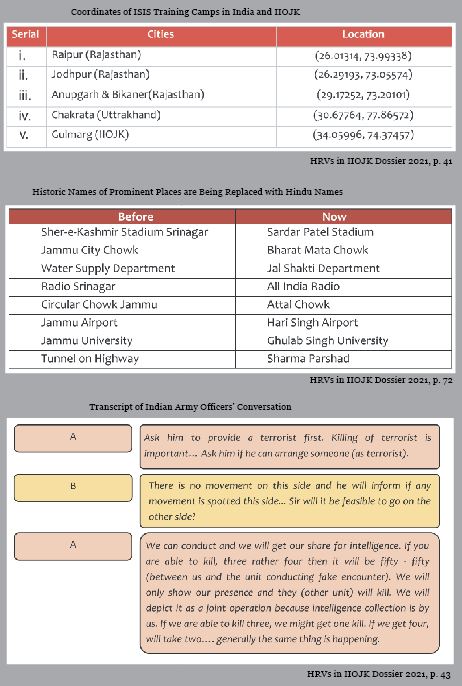 India and ISIS
There is also evidence of Indian links to ISIS in South Asia. Asim Iftikhar, spokesperson of the Pakistan Ministry of Foreign Affairs, provided a unique glimpse into India’s role in grooming ISIS cells.
This India-ISIS link is a “serious concern,” Iftikhar told Pakistani and international media on September 12, 2021, in a special briefing to unveil the dossier, conducted by Foreign Minister Shah Mahmood Qureshi, who was joined by Federal Minister for Human Rights, Dr. Shireen Mazari, and Special Adviser to Prime Minister on National Security, Dr. Moeed Yusuf.
Iftikhar talked about the “Indian patronage and training of the militant Islamic State group” and said that evidence suggested India was operating five training camps in Gulmarg, Raipur, Jodhpur, Chakrata, Anupgarh and Bikaner.
"By injecting these state-trained ISIS fighters, India may try to establish linkages of the freedom movement with international terrorism in order to malign the freedom struggle and to justify its own crimes as counter-terrorist operations," he said, in remarks reported by the media.
Indian Action Sought Against Officers Implicated in War Crimes
The dossier opens a door for bringing the Indian civilian and military officers of the occupation administration in IIOJK – the officially designated term for Kashmiri territories under Indian military occupation – to justice.
Dr. Mazari suggested that Pakistan should respond to possible international pressures on rights-related issues by linking them to the international community’s response to Indian violations in Kashmir.
"This hypocrisy has to be exposed because we are going to get more lectures on human rights in our region from Western countries. So we need to be prepared and not be defensive and say, 'show us your intent by implementing your own policies you made for yourself against India and its occupation in (Indian-occupied Kashmir)'," the Human Rights Minister said, according to multiple reports in the Pakistani media.
Six Demands That India Can and Should Meet
Explaining the next steps after releasing the dossier, Foreign Minister Qureshi made six demands that he said India can meet considering the incriminating evidence on Indian war crimes and crimes against humanity in Kashmir:

1. Stop human rights violations of Kashmiris.
2. Action against the perpetrators named in the dossier.
3. End to the demographic change.
4. End to military and digital siege of Kashmir (a reference to internet restrictions)
5. Release of all Kashmiri political prisoners.
6. Unhindered access to Kashmir by the United Nations, the Independent Permanent Human Rights Commission of the Organization of Islamic Cooperation, independent journalists, human rights and civil society organizations. 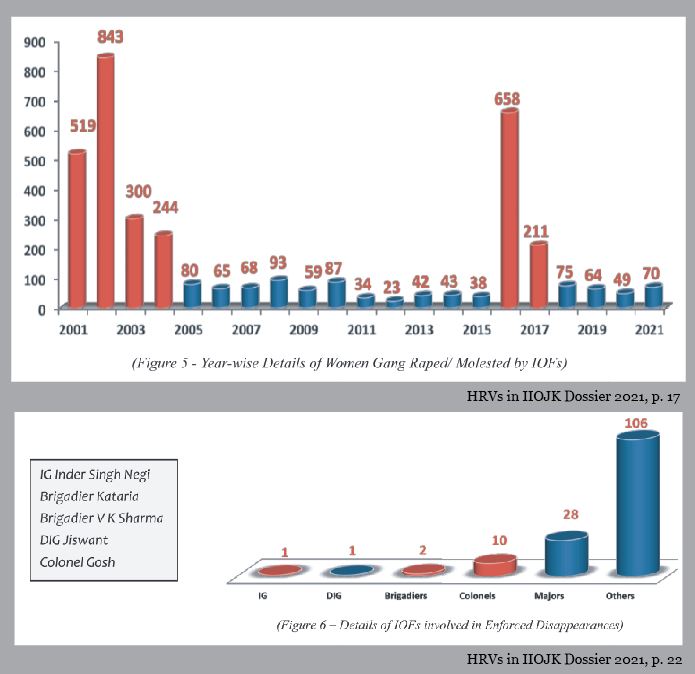 Injecting Lawfare into Kashmir Diplomacy
The dossier released by the Government of Pakistan is an attempt at “inculcating lawfare into Kashmir diplomacy,” in the words of Dr. Hussain Nadim, Executive Director of Islamabad Policy Research Institute (IPRI). It is also a force multiplier. The Pakistani dossier adds to a growing body of work that indicates a shift in how the world sees India and its human rights record. In June 2018, the United Nations Human Rights Council released an unprecedented report into India’s disturbing role inside the occupied territories of Kashmir. The report was based on the remote monitoring mechanism in view of New Delhi’s refusal to allow UN experts free access to Kashmir. This adds to multiple reports on Kashmir released by Amnesty International, Human Rights Watch, and special hearings and debates held at the U.S. Congress, the British parliament, and the European Parliament.