India’s Jingoism to Lead Where

For a number of educated Pakistanis, Indian Prime Minister Narendra Modi’s Hindu extremist agenda is a mere abstraction, a temporary deviation or at the most a betrayal from what they call India’s strong “secular tradition.” They are pinning hopes that Indian civil society and self-proclaimed secular political parties will be able to reassert themselves and put the world’s much-publicized largest democracy back on the track. 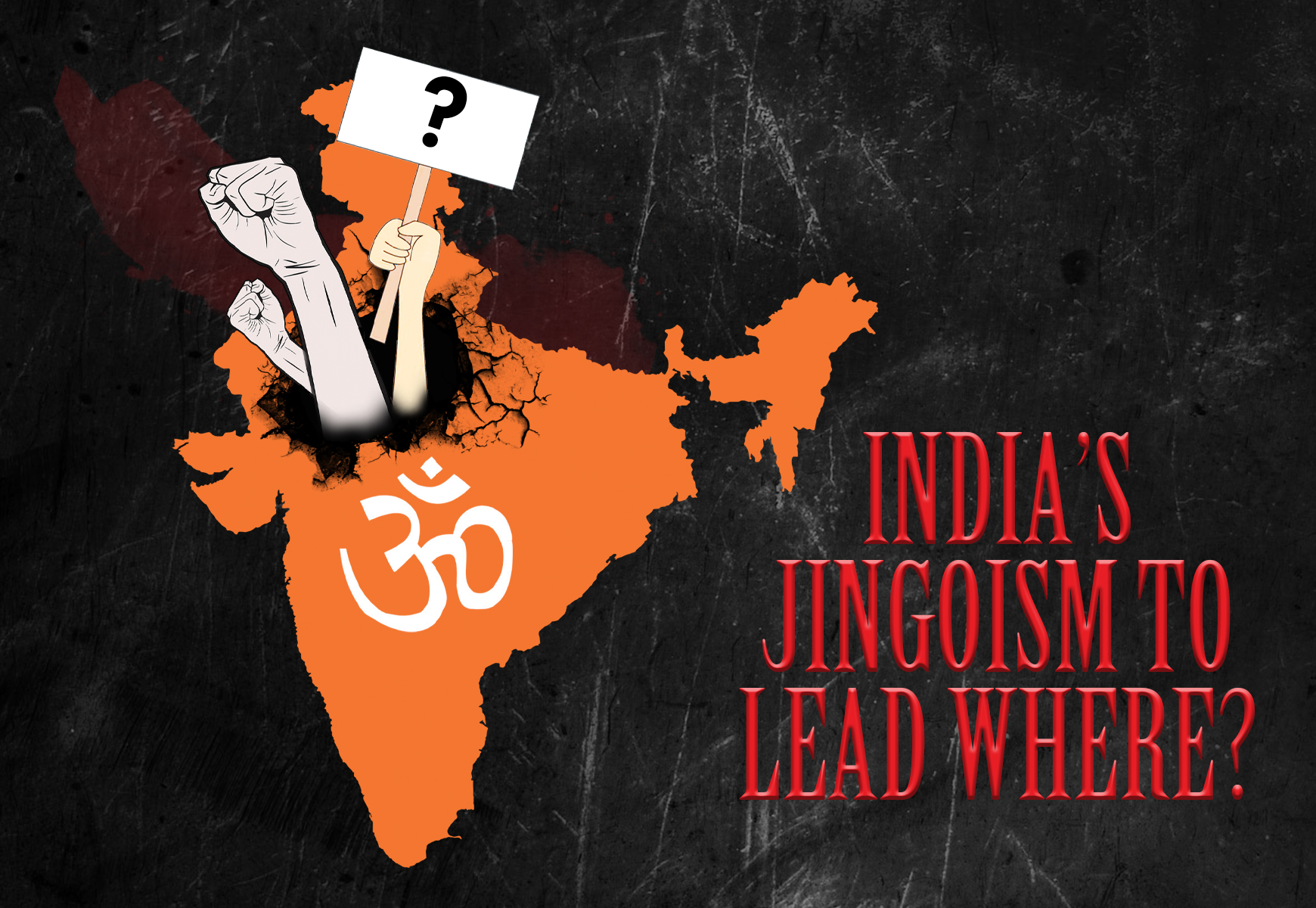 More or less similar sentiments are echoed by some of Pakistan’s frontline politicians, including those in power. Some of them lament the loss of “secular India” and the rise of Hindu fundamentalism in a way that it gives an impression that “once upon a time” India was a paradise for religious minorities. If you believe this flawed narrative, then it would mean that in the pre-Modi days there was no religious or ethnic persecution and violence in mainland India and no state-terrorism and exploitation in territories, which New Delhi forcibly occupied after the British left in 1947, including the occupied Himalayan region of Jammu & Kashmir.

But we all know that facts are different.

India never was a paradise for ethnic and religious minorities or a beacon of secularism, though successive rulers in New Delhi always tried to sell this lie to the world. Yes, the malice and bite of Hindu extremism is an old story. And getting rid of this new “historical delusion” that “once upon a time secularism bloomed in India” remains a must if one wants to understand the current wave of Hindu fanaticism, its genesis and goals.

The majoritarian will of Hindus is articulated through Modi. In Modi, Hindus have finally found a populist strongman they had been waiting for. If it was Mohandas Karamchand Gandhi, who first used Hindu religious symbolism laced with modern concepts of nationalism in Indian politics, and Nehru, who served the Hindu interests in the garb of secular democracy, it is now Modi, who has unapologetically come out with the extremist Hindu nationalist agenda while being in power. With Modi, the modern Hindu extremist politics has come full-circle.

Leaders of the Indian National Congress created the myth of secularism in an attempt to inherit a united India from the British Raj. Many key Muslim leaders, including Quaid-i-Azam Mohammad Ali Jinnah, were part of the movement, but they soon realized that Hindu leaders of Congress were pushing for a majoritarian rule under the garb of democracy. These Congress leaders were opposed to granting Muslims constitutional political and economic rights. This very realization resulted in March 23, 1940’s Pakistan Resolution and eventually led to the Partition of British-India and creation of a separate homeland for Muslims in their majority provinces.

Loads of historical research and first-person accounts are available, which hold myopic Hindu leaders of Congress, including Jawaharlal Nehru, responsible for the failure of efforts aimed at granting constitutional political and economic rights to the Muslims of sub-continent in a united India. In fact, Congress’ Hindu leaders schemed and plotted to establish Hindu rule in India and once they realized that this cannot be done in united India, they swallowed the bitter pill of Partition of their so-called “Bharat Mata.”

However, be it the Hindu leaders and their followers belonging to Congress or the hardcore Hindu nationalist groups such as Hindu Mahasabha and Rashtriya Swayamsevak Sangh – they never accepted Partition. Many of their leaders at that time believed that the newly created Pakistan won’t survive and return to the Indian fold sooner than later.

Systematic massacres and ethnic cleansing of Muslims during and post Partition days demonstrated the savagery and barbarism of Hindu extremists and their allies. And even after the dust of Partition had settled, violence, discrimination and exploitation of Muslims remained a pattern in India – whether it was ruled by the so-called secular Congress or Hindu nationalists.

In fact, the protracted Kashmir conflict – the only Muslim-majority state forcibly made part of Hindu India –  is the result of Nehru’s belligerence towards Muslims as he used the façade of secularism to crush the aspirations of Kashmiri Muslims. While Kashmir was illegally occupied by the so-called secular leaders of India, they also ensured that Muslims living in Hindu-majority provinces remained marginalized and discriminated in every field – from education to jobs.  At the same time, Muslims also remained the target of hate, violence and oppression. Indeed, anti-Muslim riots, killings and discrimination did not start in India with Modi. They remained a norm under every Indian government from that of Nehru to his daughter Indira and from his grandson Rajiv Gandhi to Atal Bihari Vajpayee till the present day.

Persecution of Muslims living in India has been the unstated policy of successive Indian governments, which pursued them as a state objective. At the same time, India also remained committed and focused to harm Pakistan – from stopping the transfer of its share of funds soon after Partition to that of its role in the break-up of East Pakistan to directly resorting to and sponsoring terrorism. The living proof of direct Indian involvement in terrorism in Pakistan is the case of Kulbhushan Jadhav – the Indian spy caught by Pakistani security forces in March 2016.

All the anti-Muslim policies in India were implemented under the false banner of secularism. But under Modi, the thin veneer of secularism has been scrapped and Muslim hostility of extremist Hindu-India is out in the open. This has indeed shocked a small minority of Indians, including those Hindus, who see secularism as a major force keeping together their artificial state. However, commitment to secularism is a minority view. And without any frontline committed leader to champion this cause, there are little chances that the juggernaut of Hindu extremism could be reined in from within India.

The majoritarian will of Hindus is articulated through Modi. In Modi, Hindus have finally found a populist strongman they had been waiting for. If it was Mohandas Karamchand Gandhi, who first used Hindu religious symbolism laced with modern concepts of nationalism in Indian politics, and Nehru, who served the Hindu interests in the garb of secular democracy, it is now Modi, who has unapologetically come out with the extremist Hindu nationalist agenda while being in power. With Modi, the modern Hindu extremist politics has come full-circle. Modi thinks that he has the means and political capital to implement the declared agenda of hardline Hindu revivalists – from the controversial Indian Citizenship Law aimed at further marginalizing Muslims to that of doing away with the special constitutional status of the Indian Occupied Jammu & Kashmir. Modi wants to fulfill his promises. He is out there to change the decade-old status quo on both domestic and the regional fronts. And conventional diplomacy and politics of wait-and-see will only help Modi to bulldoze his way through. In human history, there are countless of examples where a “wrong” has eventually become “right” due to the use of sheer force and inability of the other side to match it blow by blow. Luckily for Modi, he faces little resistance in implementing his regional and domestic agenda. As Hindu extremist goons target, persecute, humiliate, beat and kill Muslims in mainland India, the Indian forces have unleashed an unprecedented wave of terror in the occupied Kashmir which has been transformed into the world’s largest open prison. Yet, the world and the world powers watch in silence underlining the fact that morality and principles have no place in international diplomacy.

Let’s keep appealing to the world's conscience. Let’s keep applying the tools of conventional diplomacy. But this should be done with the clarity of mind that this is an activity for the sake of activity unless backed by power system. It won’t bring Modi’s India under pressure, though give us some brownie points. It won’t change the new unjust reality which Modi has managed to create using force.

It means that Muslims in India and IOJ&K will have to carry the burden of resisting and fighting Hindu extremism on their own. This is the only choice they practically have. This is the only way forward. One should not settle for a “long haul” of just offering lip service to the cause. If we do this, others will also offer only lip service. And another seven decades will pass with the blink of an eye. It is time to turn on the heat.  Only words backed by actions bring a change.

We are not warmongers. We love peace, but what option we are left with if the other party is only focusing on our subjugation to annihilation. Muslims in India, Muslims in Occupied Kashmir and we in Pakistan – all have to rethink strategy, improve the game, get ready to exploit weaknesses and internal contradictions of the enemy and confront the bully on the front foot. We have to create the perfect moment now rather than wait for it in some distant future. Now it is the race against time. Our failure to act only emboldens Hindu extremists and give them confidence to pursue their objectives confidently. Therefore, putting a spanner in the juggernaut of Hindu extremism remains a must. And we should be ready to give the price of our actions (or inactions) and extract the same from India.

The writer is an eminent journalist who regularly contributes for print and electronic media.