Increasing Marginalization of Muslims in India: Vindication of Two-nation Theory

The way Muslims and the other religious minorities are being treated in India validates the Two-nation Theory and proves that the founding fathers of Pakistan were right in demanding and carving out a separate homeland for Muslims. 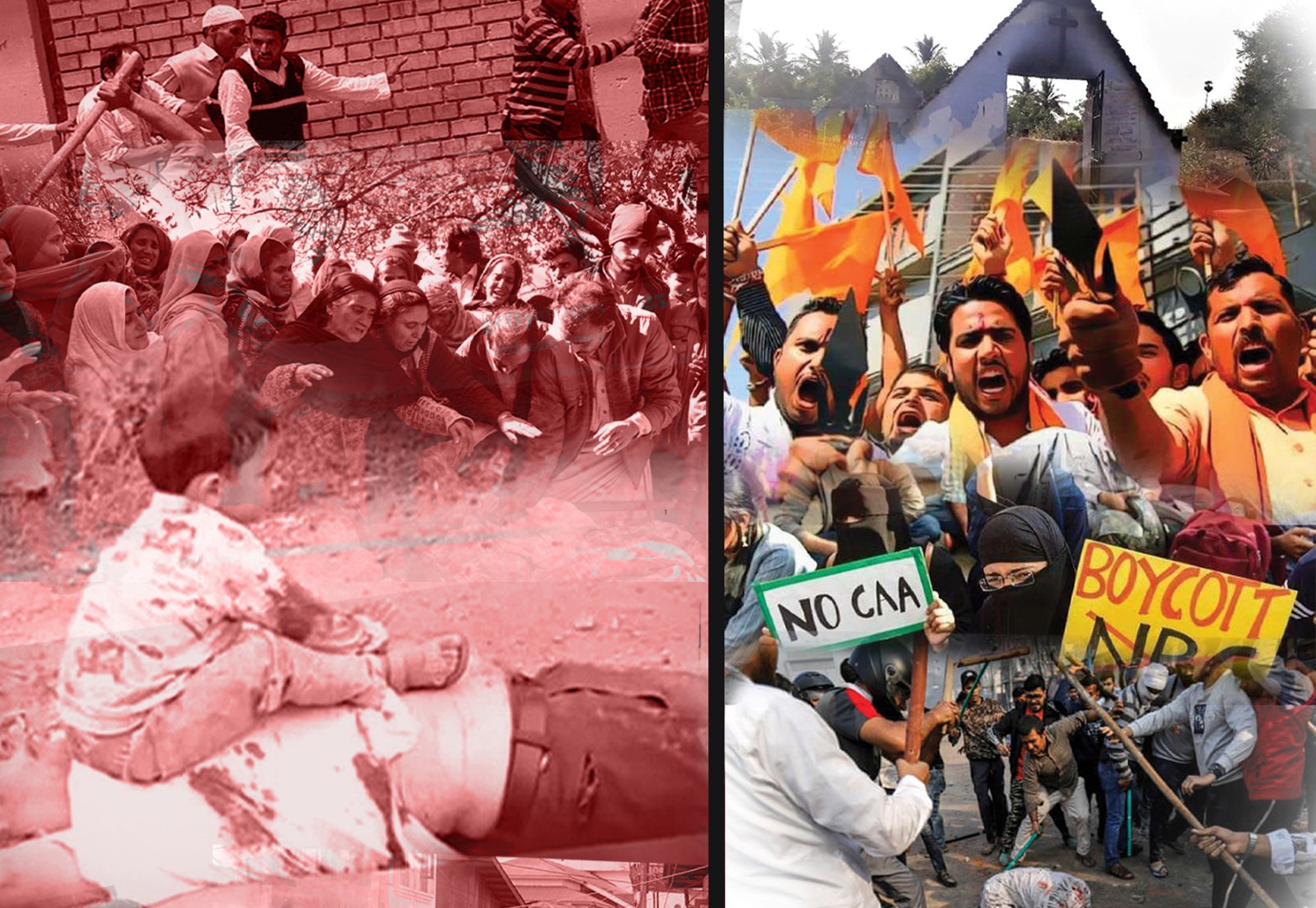 Atiny, but fairly influential lobby in Pakistan has always tried to highlight the so-called cultural and historical oneness of Muslims and Hindus living in the sub-continent. On the other side of the border, especially before the rise and dominance of Hindutva in Indian politics, there were many voices which echoed similar sentiment with an obvious view to undermine the creation of Pakistan.
The simplistic storyline would often tell the gullible minds that Muslims and Hindus have had a shared history spanning over centuries in South Asia – the Hindustan of yesteryears. They speak the same language, share more or less the same kind of cuisine, and their cultural and civilizational ethos remains the same. They stand united with their bond of language, poetry, and literature articulated at least in the Ganga-Jamuni Tehzeeb (civilization). Therefore, the Muslim-Hindu divide, which resulted in the creation of Pakistan, was nothing more than an aberration of history. And this aberration occurred due to the ‘divide and rule’ policy of the British, who started seizing power in parts of the sub-continent from the middle of the 18th Century and established their rule firmly by the second half of the 19th Century, formally winding up the once mighty Mughal Empire that had shrunk to Delhi by then.
The storyline of oneness of Muslim and Hindus was created by the West-inspired pioneers of Indian nationalism and politically articulated, mainly by the Indian National Congress. These nationalists wanted to create a nation out of a diverse set of people, who were branded as Indians by their British colonial masters. Thus, ironically, the first wave of Indian nationalists had adopted for themselves the definition coined by the colonial rulers. The Congress leadership had its eyes set on inheriting the British India in one piece, though even in the heydays of Muslim rule or before that, many of parts the sub-continent conquered by the British were historically never a part of any single state. There were 565 princely states in British India comprising almost 40 percent of its landmass and enjoyed considerable autonomy and sovereignty.

The storyline of oneness of Muslim and Hindus was created by the West-inspired pioneers of Indian nationalism and politically articulated, mainly by the Indian National Congress.

The first generation of Indian nationalists, inspired by the western ideas and education, wanted to create a similar nation-state as existed in Europe. But when their half-baked and borrowed ideas were put to test in the huge and diverse landmass of British India, they stood exposed.
The biggest question described as the ‘communal problem’ by the British raised its head in the form of Muslim-Hindu contradiction, although many educated Muslims, including Quaid-i-Azam Mohammed Ali Jinnah stood by the Congress initially. However, the Congress leadership failed to come up with a solution to this problem in the form of guaranteeing economic and political rights to the Muslims. In fact, the Hindu leadership of the Congress itself became an obstacle in guaranteeing these rights to the Muslims. Quaid-i-Azam, known as the ambassador of Muslim-Hindu unity, came up with many plans and proposals, but each was shot down by the highly biased Hindu leadership of Congress, which presented itself in the guise of secularism.
But for Muslims, the western concept of majority rule, without any constitutional guarantees, only meant becoming subservient to the Hindu rule permanently. This realization gradually led towards the articulation of the demand of a separate homeland for Muslims. But this demand was not raised since day one. Muslim leadership led by Quaid-i-Azam tried their best to come up with a solution under the ambit of one state by demanding greater autonomy for the Muslim-majority provinces and rights for the Muslim-minority provinces. But these sincere efforts were blocked by the Indian National Congress that eventually led to the launch and success of the Pakistan Movement.
As the Congress pressed for its demand that the British recognise Indians as one nation, Quaid-i-Azam challenged and smashed this myth by underlining the uniqueness of Muslims. And soon, a vast majority of Muslims in India – whether belonging to the Muslim-majority provinces or the minority ones – galvanized themselves as one to demand their political and economic rights.
In his presidential address at the annual session of Muslim League at Lahore in 1940, Quaid-i-Azam while articulating the Two-nation Theory said, “The Hindus and Muslims being the two major nations belong to two different religions, philosophies, social customs and literature. They neither intermarry nor interdine and they belong to two different civilizations which are based mainly on conflicting ideas and conceptions. Their aspects on life, and of life are different. It is quite clear that Hindus and Muslims derive their inspiration from different sources of history.”

Quaid-i-Azam, known as the ambassador of Muslim-Hindu unity, came up with many plans and proposals, but each was shot down by the highly biased Hindu leadership of Congress which presented itself in the guise of secularism.

And Quaid-i-Azam kept hammering the Two-nation Theory as the Hindu leadership claimed that there were only two forces in India – the Congress and the British. Our Quaid responded that there was also a third force in British-India – the Muslims. On March 8, 1944, while addressing the students of Muslim University, he discarded the Congress narrative and stated: “Hindus and Muslims though living in the same town and villages had never been blended into one nation. They were always two separate entities.”
Full credit should be given to the foresight of the Muslim leadership of those times – starting from Sir Syed Ahmed Khan, to Allama Iqbal and then to Quaid-i-Azam Mohammed Ali Jinnah – that they could see through the game of the Hindu leadership being played in the garb of secularism. These visionary leaders saw the malicious intentions of the Congress to establish Hindu hegemony in India after the departure of the British. Yes, the veneer of secularism in Congress was just a ploy to fool the Muslims. And they were proved 100 percent correct in reading the mind of the Hindu politicians – both who presented themselves in the garb of secularism and those who unashamedly advocated Hindutva – an ideology aimed at establishing the hegemony of Hindus and Hinduism in India – from the platforms of Hindu Mahasabha and the Rashtriya Swayamsevak Sangh (RSS).
Following the partition of British India in 1947, the Muslims living in the Hindu-dominated India always remained on the hit-list. Their way of life, their religion, their civilization and even their lives remained threatened, even under Congress’ rule. But after the rise of the Bharatiya Janata Party (BJP) as a dominant political force, the sham veneer of secularism was ripped off the face of India. And with it the narrative of the similarity between Muslims and Hindus, as advocated by the tiny segment of Westernized liberals in Pakistan and their Hindu counterparts in India, got trounced underlining the farsightedness of the founding fathers of Pakistan.

Muslims are being forced to convert or dilute their Muslimness just to survive or be a part of mainstream India under the extremist Hindu rule.

Yes, the Two-nation Theory, which some so-called intellectuals described as the relic of the past and no more relevant in this day and age, remains as relevant today as it was in the first half of the 20th Century, leading to the division of ‘Bharat’ into Hindu-dominated India and Muslim Pakistan and later also into a Muslim Bangladesh.
Those who predicted the demise of Two-nation Theory following the dismemberment of Pakistan were proved wrong by history. Muslim Bengal did not merge into Hindu Bengal despite the unity of language and culture, thus highlighting the power and influence of religion in nation-building and its sustenance. As the extremist Hindu government of BJP targets Muslims living in West Bengal, questioning their nationality status and trying to throw them out of the country, it shows how the Hindu-majority is pushing the agenda of transforming India into a Hindu state in which the followers of all the other religions are to be treated as third class citizens with no equal rights or opportunities.
The Hindu cow vigilante mobs are on a killing spree of Muslims, especially since 2010, and so far more than 80 have lost their lives and many more have been injured on the allegations of eating beef or slaughtering a cow.
Similarly, Hindu extremists are aggressively and often violently trying to prevent Hindu women from marrying Muslim men. They brand these interfaith marriages as ‘love jihad’ and violently attack Muslim men, force them into hiding or send them to jail for marrying a Hindu women. These extremists, under the government patronage, have also launched the so-called reverse love jihad in which Muslim women are abducted and raped by Hindu men. Such cases are on the rise since the BJP returned to power in 2014.
Discrimination against Muslims in education and employment remains an old story, though under the regime of Narendra Modi, this has intensified. Muslims, as a community and their neighborhoods, are deliberately kept backward and poor. Similarly, the number of Muslims in prison exceeds in proportion to their population. Whenever, there is targeted violence against the Muslims, the state machinery deliberately protects and even helps the violent Hindu militants.
Muslims are being forced to convert or dilute their Muslimness just to survive or be a part of mainstream India under the extremist Hindu rule.
The unilateral assimilation of Indian Illegally Occupied Jammu and Kashmir in Indian union territory by the Modi government has been done to make Muslims a minority in their own land. The Modi government not just scrapped the nominal constitutional guarantees given to Kashmiris, but it also violated the bilateral agreements made with Pakistan and flouted the United Nations resolutions on this disputed Himalayan region.
The way Muslims and the other religious minorities are being treated in India validates the Two-nation Theory and proves that the founding fathers of Pakistan were right in demanding and carving out a separate homeland for Muslims.
But with the creation of Pakistan, the communal or religious problem of India has only partially been addressed. The way Hindu extremists are pushing their agenda, it is causing stress on the artificial state carved out by the British in the name of India. This unnatural state faces existential threats because it has been unable to resolve its internal contradictions and treat its minorities justly. Going forward, the secessionist movements in India are all set to grow strong and challenge the existing boundaries of the artificial state of India, proving that the Two-nation Theory not just stood the test of times, but will remain relevant until the exploitation, suppression and victimization of the minorities continues in Hindu India.

The writer is an eminent journalist who regularly contributes for print and electronic media.
E-mail: [email protected], Twitter: @AmirZia1