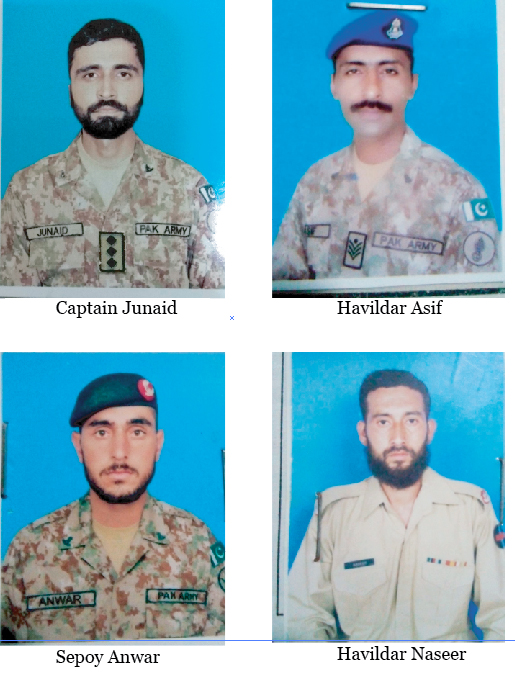 Security forces launched an IBO in Gharlamai and Spera Kunar Algad in North Waziristan during which 9 terrorists were killed on September 22, 2018. A group of terrorists was reported to be have infiltrated from across the border and hiding in a compound.
In an intense exchange of fire, 7 Pakistan Army soldiers including an officer embraced shahadat. Those who embraced shahadat include Captain Junaid, Havildar Amir, Havildar Atif, Havildar Nasir, Havildar Abdul Razzaq, Sepoy Sami, and Sepoy Anwar.
The area has been cleared and identification of killed terrorists is in progress.

Security forces launched an IBO in North Waziristan on September 13, 2018 against terrorists involved in an attack on security forces on September 12 as well as ambush on security forces’ convoy during December 2017, which resulted in shahadat of Lt Moeed. All 4 terrorists who were fully armed, including operational level terrorist Aftab Parakay, were killed. In exchange of fire 3 soldiers Naib Subedar Nazir Ahmed Chandio, Sepoy Fakhar and Sepoy Aamir of Pakistan Army embraced shahadat.