In every product we buy, there is a hidden natural resource cost. The loss of precious natural resources in production and recycling creates an unseen environmental impact that will come back to haunt us in the future. We explore elements of one of the most damaging – water.

There is no better example of hidden loss of natural resources than the humble plastic drinks bottle, a ‘miracle’ invention of the twentieth century, and now a threat to the health of the planet. When American engineer, Nathaniel Wyeth, patented polyethylene terephthalate (PET) bottles that could withstand the pressure of carbonated liquids in 1973, he unwittingly created a monster. It seemed a brilliant, game-changing invention at the time – plastic bottles were a much cheaper alternative to glass bottles, lighter and cheaper too in terms of fuel to transport, and supposedly easily disposable. Nathaniel Wyeth surely could not have envisaged the environmental disaster his patent would unleash.
Within a few decades of his patent, the disposable plastic drinks bottle became an environmental nightmare. Look around you and there they are, plastic water bottles. Every meeting, every event, every restaurant, our homes, our cars, cluttering up the roadside and waterways, the plastic water bottle is everywhere.  Plastic bottles are not the only villain in the plastics pollution scenario, but they are one of the most visible and the ‘poster child’ of environmental organisations globally. This is with good reason.
Think about this. vv Over 500 billion plastic drinks bottles are made every year. That’s almost 1.5 billion per day. That’s a lot of water lost along the way for a product that will end up polluting the landfill and waterways for centuries to come. 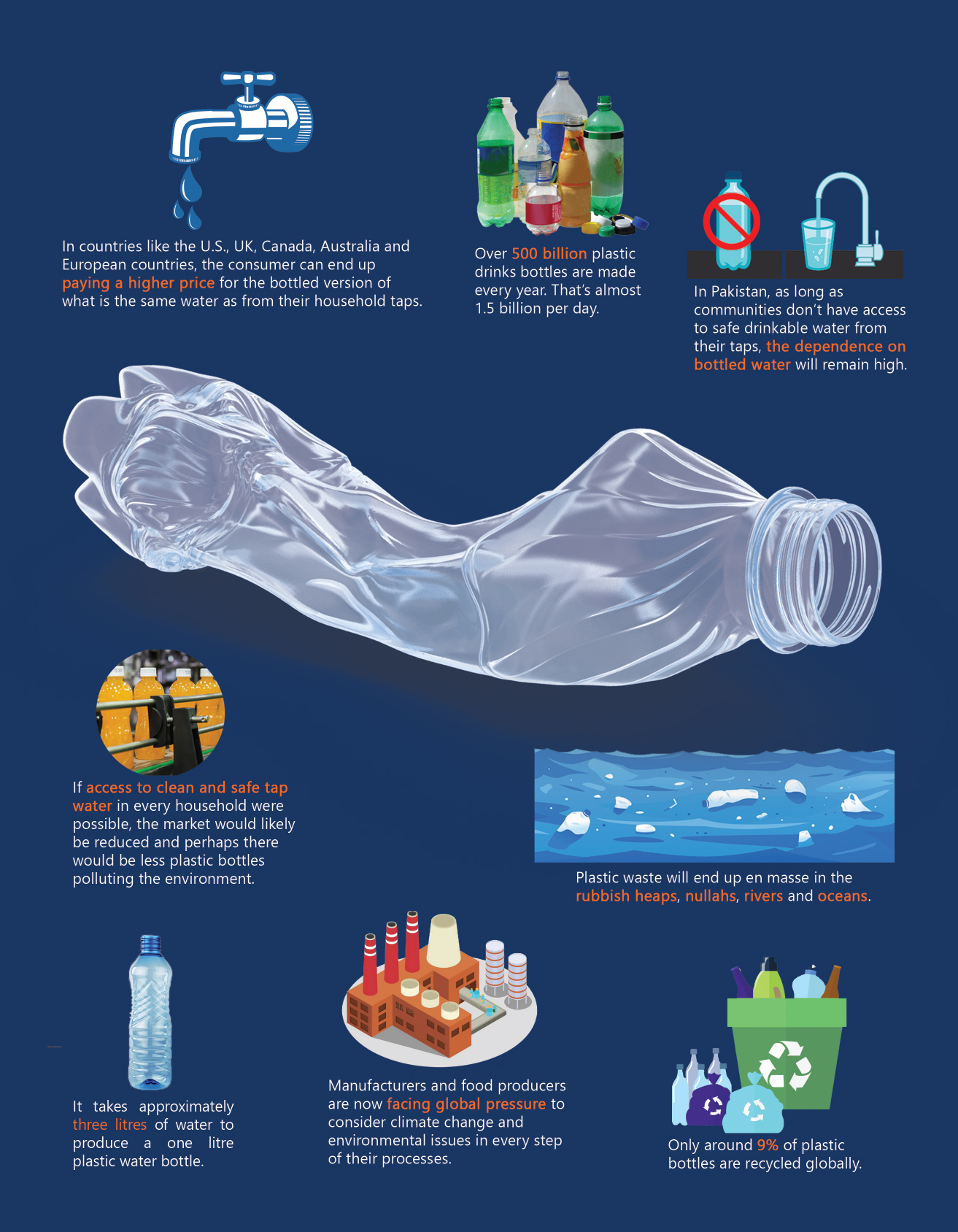 It takes approximately three litres of water to produce a one litre plastic water bottle. Over 500 billion plastic drinks bottles are made every year. That’s almost 1.5 billion per day. That’s a lot of water lost along the way for a product that will end up polluting the landfill and waterways for centuries to come.

Consumer behavioural change can at least help reduce the number of plastic bottles by simply buying a refillable water bottle to take with us when we move around. But it takes much more than that. Governments across the world have a responsibility to all communities to work towards clean, safe, and affordable drinking water, and better sanitation.

However, there is some progress. Some large global soft drink and bottled water companies in the world have committed to switching to more sustainable processing including, introducing a percentage of recycled plastic into their production and in the future, full inclusion. While this may be a while down the track, it’s a step in the right direction. Some are also supporting governments and environmental alliances and organisations to develop initiatives to better manage and replenish groundwater, and to support recycling. These are important commitments and should set good examples if they are fulfilled and are not based on ‘greenwashing’ their environmental credentials. Big industry has the investment power and access to technology to lead the way and help governments and communities solve water problems, particularly in manufacturing processes.
Recently, there has been an interesting global development which might encourage change in reducing plastic pollution sooner than expected. At the UN Environment Assembly in Nairobi in March 2022, Heads of State, Environment Ministers, and other representatives from 175 countries endorsed a historic resolution to end plastic pollution and negotiate an international legally binding agreement by 2024. The resolution calls for all stakeholders to “work towards sustainable production and consumption of plastics, including, among others, product design, and environmentally sound waste management, including through resource efficiency and circular economy approaches”.
If the agreement to end plastic pollution through a legally binding agreement is endorsed in 2024, it will be a significant step towards changing the way all single-use plastics are produced and disposed of. This will be beneficial in reducing the loss of natural resources used not only in plastic bottles, but all types of plastic packaging. It would be a huge win for the environment overall. But it is still far from certain and there are many vested interests at stake in such a monumental move towards restrictions. While some global corporations are supportive, at least publicly, others are pushing back through lobbying governments via their industry representative groups.
Unfettered use and wastage of water exacerbates water stress and is a serious issue for any country, including Pakistan. Pakistan is already considered to be one of the most water stressed countries in the world according to reports by the International Monetary Fund, United Nations Development Programme, and the Pakistan Council of Research in Water Resources. The reports raise the alarming possibility that the country could reach absolute water scarcity by 2025 or not far beyond at the current rate of depletion, lack of storage infrastructure, drought, poor irrigation and production practices, and a lack of enforcement of environmental controls. Water is vital to human existence and to run out of it is unimaginable. At that point, water insecurity can become a national security issue if it leads to conflict over resources, and mass migration. Climate-smart solutions and recycling innovations in all industries and agricultural sectors are imperative to make a significant reduction in the loss of natural resources and reverse environmental degradation.
But we have to move far beyond just lip service, reports, conferences in luxury 5-star hotels, and agreements that may never be fully implemented in our lifetime. Communities need to step up and act. Some towns and cities around the world have shown impressive initiative by implementing bans on plastic water bottles. Bundanoon, a small, picturesque Australian town in the highlands south of Sydney, was the first to do this in 2009. Angered by a proposal from a big water bottling company to set up a plant in their small town to take millions of litres of water from the precious local aquifers, the well-informed community came together to say a firm ‘no’. Residents saw no value in letting a water company take their water, bottle it in plastic and transport and sell it around the country, even back to their town, and contribute to environmental problems. Bundanoon, like all Australian cities has pleasant-tasting, clean municipal tap water. They rejected the bottling company’s proposal and encouraged local shopkeepers not to sell bottled water. Instead, they set up free water refilling stations and drinking fountains around the town and promoted the ‘green’ tourism potential of this initiative. This enhanced the economic benefits across the entire community.

Manufacturers and food producers are now facing global pressure to consider climate change and environmental issues in every step of their processes. But the investment costs of process change are substantial and there are also jobs at stake, so change will not come quickly or easily.

Bundanoon, like all Australian cities has pleasant-tasting, clean municipal tap water. They rejected the bottling company’s proposal and encouraged local shopkeepers not to sell bottled water. Instead, they set up free water refilling stations and drinking fountains around the town and promoted the ‘green’ tourism potential of this initiative.

International media picked up the story and Bundanoon residents quickly found themselves famous as pioneers of how communities can take a stand to reject the plastic water bottle. The bottled water industry wasn’t happy, but it did signal a change in consumer behaviour which could affect their profits and therefore, it could not be ignored. Today, cities and towns in a number of countries are introducing similar full or partial bans, including total bans on plastic bottled water in government buildings. It is likely that such actions will grow globally as governments and communities grapple with the reality of climate change and plastic pollution. The small Bundanoon community showed us that it is possible to join together to make a difference.
Banning plastic water bottles is unlikely to happen in Pakistan any time soon and as long as communities don’t have access to safe drinkable water from their taps, the dependence on bottled water will remain high. But it’s time to resist the single-use plastic water bottle where possible. There is a myriad of research information available online to educate ourselves and our children on the impact of plastic bottles, loss of water and other natural resources, along with case studies to educate ourselves on how we can contribute to change. However, while brilliant research may be at our fingertips, it is often devoid of plain language to communicate simple, clear messaging on issues and solutions. Many reports, brochures and websites on these important climate and environment topics are written in ‘development-speak’, laden with acronyms, jargon, and technical terminology, and often only available in English. They are really meant for development professionals and donors. It would be helpful if international organisations, including the United Nations, could work towards ‘plain’ language rather than jargon on important topics.
As we’ve seen from the Bundanoon example, individuals, organisations, and communities can contribute individually or collectively to do something worthwhile towards reducing or banning single-use plastic water bottles. We can’t expect greater change if we don’t try to do something ourselves. Let’s look at those simple steps again. We can start by understanding the hidden water footprint and environmental impact of those bottles. Using more filtered water dispensers in the work and public spaces and promoting greater use of refillable water bottles could make a difference. Cut out all those individual water bottles in every meeting and event (it is astounding to see photographs of organisations responsible for addressing plastics pollution holding meetings with large numbers of disposable plastic water bottles on the tables) – there are more sustainable solutions to this. Commit to responsible household recycling. Encourage governments to ensure enforceable policies and legislation on plastics production and disposal, and management of natural resources. Some governments have already developed policies for banning plastic bags, but it must go beyond that to include bottles, and all types of disposable plastic packaging.
Cleaning up plastic pollution in the waterways like the Indus River system and our oceans is critical, but wouldn’t it be better if we prevented the problem in the first place? Through knowledge-sharing and a dedicated approach working together across all levels of society, we can reduce our water footprint and preserve our natural resources, and move towards a cleaner, healthier environment.